Skip to content
WHAT A RIDE!
Sturgis Motorcycle Museum & Hall Of Fame Rocks The 77th Rally

Sturgis, South Dakota, August 21, 2017 – Between the standing room only Class of 2017 Hall of Fame induction ceremony, the Pappy Hoel Speed Classic races and the brand new block party with bands going live at five on the Glencoe Stage every day, the 77th Sturgis Rally was rocking for the entire rally week! Better weather and a full schedule of events helped bump up attendance to more than 376,000 people this year. 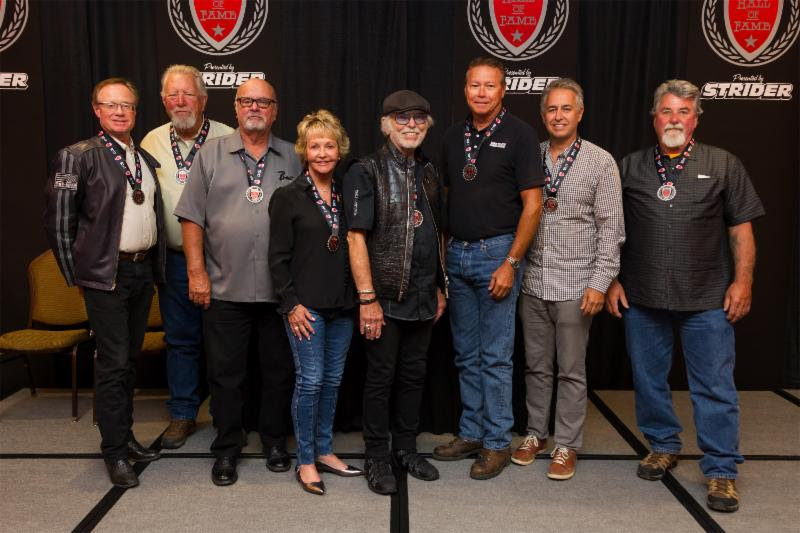 “Come for the races, stay for the entertainment,” said Myrick Robbins, Executive Director for the Sturgis Museum & Hall Of Fame. Appropriately things kicked off at the very same historic dirt track where it all began back in 1938. Backed by Coca Cola and area grocery stores, the Pappy Hoel Speed Classic roared into the Meade County Fairgrounds in downtown Sturgis on August 3-5.

“We were twisting the throttle to the stops with the Speed Classic, the inaugural Block Party co-hosted by our friends from Monster Energy and the annual Hall Of Fame ceremonies,” said Robbins. “But that is what the Sturgis Rally is all about. Founder J.C. ‘Pappy’ Hoel started with a race and a week-long spectacle just sort of evolved from there.”

Also evolving was the Sturgis Block Party. For the first time this year, merchants on the newly revitalized Main Street teamed up with the Museum and Monster Energy to host a week-long event right in the heart of downtown. “Motorcycles, music and more… it was rocking,” said Robbins.

However, the Hall Of Fame Induction Ceremony presented by Strider Sports was definitely the highlight of the week. John Paul DeJoria, philanthropist co-founder of Paul Mitchell hair products and Patrón Spirits (as well a Hall of Famer himself) emceed the class of 2017 induction ceremony in his own inimitable style… he even passed along some business advice to everyone in the room.

When DeJoria started Patrón in 1989 it was the quality that made the difference. “Quality reaps longevity. Quality continuously keeps something going… and it is the quality of these people that will keep the industry and the Museum going.”

“The Sturgis Motorcycle Museum & Hall of Fame recognizes individuals or groups who have made a long-term, positive impact on the motorcycle community,” added Robbins. “We honor our Hall of Fame members by telling their stories and history, showcasing their contributions and accomplishments. In doing this, we hope to inspire our visitors and the riding community.”

The class of 2017 may have been the most influential and inspirational yet. From Lifetime Achievement honoree William G. Davidson to the Pappy Hoel Award winner Rod Woodruff, founder of The Buffalo Chip, the Lodge at Deadwood in Deadwood, South Dakota, was packed with the best and brightest in the motorcycle industry. Colleen Barnett-Taylor and Mike Taylor, Cory Ness, Mark Shadley, Jim Thiessen and Terry Vance comprised this year’s inductees.

“I get excited every year at Sturgis… I jump up and down a lot and I yell and scream and I blew out my voice, “said Lifetime Achievement honoree Willie G. after being introduced by his son and current director of the Harley Davidson Museum, Bill Davidson.  “I would like to thank the Sturgis Hall of Fame for honoring me and I will always remember a day like today.”

Blown out voice or not, Willie rallied to conclude the ceremony shouting a message near and dear to all the honorees, past and present: “Ride free! Sturgis forever!”

To keep the quality up as suggested by John Paul DeJoria and to keep Sturgis forever as Willie G. called for, any and all donations are welcome. Donate through http://www.sturgismuseum.com/Contribute

About The Museum: The Sturgis Motorcycle Museum & Hall of Fame’s mission is to collect, preserve and interpret the history of motorcycling; honor those who have made a positive and significant impact on the sport and lifestyle; and pay tribute to the heritage of the Sturgis Rally. Our vision is to continue as a world-class museum offering comprehensive and educational exhibits and showcasing rare and unusual motorcycles significant to our history and our sport. The Sturgis Motorcycle Museum & Hall of Fame stands out because of the fact that we not only document the history of the machines, we document the history of the people who have shaped and changed the sport and lifestyle. This will be a resource and inspiration for future generations. Honor the Ride… Build the Legacy!

About The Pappy Hoel Speed Classic:  For Sturgis Rally founder J.C. “Pappy” Hoel, the focus for the Rally was always on racing. From 200 spectators and 8 racers in the summer of 1938, the Rally brought in more than 800 riders the following year and the race became highlight of barnstorming competitors in the uniquely American sport of Flat Track. The Sturgis Motorcycle Museum & Hall Of Fame is honored to partner with the White Plate Motorcycle Club and Steve Nace Racing Promotions to produce the The Pappy Hoel Speed Classic.

Colleen Barnett & Mike Taylor – Colleen Barnett-Taylor started her motorsports career at Barnett Clutches & Cables while still in her childhood working for her parents (and original 1948 founders), Charlie and Afton Barnett. Since the beginning Colleen has been a driving force and integral part of the company. Mike Taylor, already a long-time motorcycle rider/enthusiast, joined the firm in 1968 which cemented a great partnership after he and Colleen were married. Together they have operated Barnett since 1975 and owned the company since 1993.

Cory Ness – Don’t think for a second that Cory Ness rode his famous father’s coattails into the Sturgis Hall Of Fame. At only 10 years old, he disassembled his bicycle, painted it, chromed its parts and entered it in the Oakland Roadster Show. The first motorcycle he turned his talents to was a wrecked CB350. After building it back up, Cory sold it before even getting a chance to ride it. He was 14! Today Cory is the chief designer behind Arlen Ness Enterprises where he runs the day-to-day business. In between designing new parts and accessories, he still finds time to wrench on custom bikes periodically.

Jim Thiessen – For 50 years, machinist and go-fast guy Jim Thiessen has generated trust with riders, record breakers, racers and certified Harley mechanics around the world whom use JIMS® products on a daily basis. Today JIMS® is one of the industry’s leading producers of performance parts, accessories, tools, transmissions and high-performance engines – all aimed at enhancing the Harley rider’s experience.

Terry Vance – #35 on the NHRA’s 50 greatest drag racers of all-time, 14-time national champ Terry Vance never lets off the gas! Terry and his tuner Byron Hines shared a passion for the quarter mile from the early days, but they also shared a vision of creating a company that would be a pillar of the motorcycle aftermarket, and they used their unrivaled achievements in racing to build a brand that would unmistakably stand for quality and performance.Terry Vance is an American former professional motorcycle drag racer, racing team owner and manufacturer of high performance parts for motorcycles.

Rod Woodruff – Since 1981, the Sturgis Buffalo Chip Campground has treated millions of motorcyclists to rock concerts, camping, entertainment and more. Rod Woodruff is the man who brought Rock & Roll to the Black Hills and now hosts a 10-day Concert Series each August during the annual Sturgis Motorcycle Rally. The Buffalo Chip provides a music festival, various other forms of entertainment, and full service tent, RV and cabin camping on almost 600 acres in rural Meade County.

William G. Davidson – Willie G. is not just a brand ambassador for Harley-Davidson, he is an ambassador for biker culture worldwide. The Museum’s goal is to “Honor the Rider” and Willie G. is the embodiment of motorcycle riding. Already a pre-2001 member of the Sturgis Motorcycle Museum Hall of Fame, Willie G. was joined by his lovely wife Nancy in the Class of 2010. Just like Sturgis Rally founders Pearl and Pappy Hoel, Willie G. and Nancy have made a long-term, positive impact on the motorcycle community.