The editors of IronWorks Magazine are proud to announce Iron Trader News, a new title that’s really an old title. This was the name that founding editor Dennis Stemp gave to our original publication back in 1989 and it’s the name that started it all. Iron Trader News was the springboard for IronWorks, a biker magazine in a classy package that insisted on quality images, spunky layout, reliable information and concise, intelligent writing. As we wrap up IronWorks after 24 years, we salute those pages that brought respect to biker rags at large and produced the industry wide identity of an “IronWorks Bike.”

We can’t turn back the clock, but we can go back to pursuing motorcycle riding and wrenching the way we did then: with spirit, instinct, drive, intent, and authentic passion – no holds barred. We’re jumping back in with no corporation to kowtow to, no newsstand to tell us where we can and can’t be sold, no limit on space. Just original voices bringing the best in biking: by riders and for riders, retaining the level of excellence that you, our readers, have come to appreciate and expect.

First up is the ITN Facebook page (like us now!) then the website and blog. We’ll follow with a full-fledged digital magazine at a totally retro subscription price, especially considering the superior quality of its unique content. With your interest and support, subscriptions to the print version of Iron Trader News won’t be far behind.

We’re just now getting rolling with Iron Trader News so we’ll ask your patience as we get some meat on the bones of the title. But before long, look for tasty blue plate specials and offerings of the gourmet sort moving forward – and plenty of eye candy, too. Iron Trader News: all you expect, plus plenty you don’t.

Marilyn Stemp and her husband, Dennis Stemp, started IronWorks Magazine in 1989.  IronWorks began as an extension of their hobbies and quickly took over their lives. At its best, IronWorks was collaborative and inclusive, a trusted source that entertained and informed on a framework of fairness and integrity.

When Dennis passed away in 2000, Marilyn took the helm at IronWorks.“It provided a springboard to the rest of my life, opening doors to opportunities. Running IronWorks pushed me to move off the pillion, so to speak, and forced me into new challenges.” After almost 25 years, IronWorks ceased publication in 2014 but Marilyn remains proud of the team, including her son, Vincent, who was on staff then.

In 2014 Marilyn reinvented herself to stay in the industry she loved. She established Iron Trader News  online to continue IronWorks’ mission. She authored the Harley-Davidson sanctioned Harley-Davidson CVO for Motorbooks International/Quatro Publishing, and edited Gloria, A Lifetime Motorcyclist by Gloria Tramontin Struck for Wolfgang Publishing. She also edits the Kiwi Indian E-News, and handles consulting projects for the Sturgis Buffalo Chip including the Biker Belles Ride, Wild Gypsy Tour, and Motorcycles As Art Exhibition, curated by Michael Lichter. 2018 was her fifth year editing the Sturgis Rider Daily at the Chip.

In 2015, with Jeff Najar, she began the Flying Piston Charity Breakfast held annually at the Buffalo Chip to benefit technical education scholarships and Motorcycle Missions. At the 2018 Breakfast, 7 tiny Strider custom bikes were unveiled in a new initiative to promote new ridership.

Marilyn is a partner in the world’s largest Evel Knievel collection, now housed in the new Evel Knievel Museum, in Topeka, Kansas. She was inducted into the Sturgis motorcycle Museum and Hall of Fame in August, 2018.

Staff Photographer & Digital Media Specialist. In a nutshell, I’m a Philly Boy, Penn State University, US MARINE CORPS Vet, Biker, and Photographer all rolled into one. I’ve been shooting bikes & the biker lifestyle since the 90′s, I’ve run Biker Lifestyle websites & have more than 20,000 published images world wide, so I’ve kept myself rather busy. The opportunity came up to work with Iron Works, and I jumped on it. I’ve found a home that cares about my thoughts & ideas, and that’s all I needed to understand because my efforts are strictly about taking this magazine into the digital age, so under Marilyn’s watchful eye, and keeping on the course that Iron Trader News has charted, my goal is to make the magazine visible on all devices so stay tuned!

Vincent Stemp, IW’s Tech and Trends Editor, didn’t come across his last name by accident. He’s the son of founding editor Dennis Stemp and current editor Marilyn Stemp. Maybe it runs in the family, huh? He’s in the last stage of earning a degree in Journalism from North Carolina State University in Raleigh, NC, where he lives. He has been responsible for compiling comprehensive buyer’s guides for several years and also worked at Flying Circus British Cars in Durham, NC while attending college. The gearhead streak runs deep. You’ll see Vincent’s name attached to more feature bike stories as time goes on. Expect to see him covering events, too, meeting the people who knew his father—and put up with his mother.

Learning to first ride a motorcycle in 2010, Leah Misch has now traveled throughout the country on her Indian Scout earning her the title, “The Indian Girl.” Her motorcycle travels have taken her to riding her motorcycle on stage with Dancing with the La Crosse Stars to touring in Paris, France. Leah is excited to be writing for Iron Trader News, offering a fresh point of view during the founding footsteps of a new age of women riders. With a witty millennial perspective, she draws from her cross-country travels as a product tester having demo’ed a variety of motorcycles – from a single cylinder Suzuki Boulevard to the S&S Cycle Dragon 143 monster bagger. As a Nurse Health Coach by profession, she brings a fun new edge of exploring to motorcycling. Leah was selected winner of the Garage Girl’s Ultimate Biker Makeover contest in 2016 opening more doors in the industry. Leah loves motorcycles, the open road, and empowering women riders. Follow her travels at www.ridingwithleah.com

Who is Hervé Rebollo ? 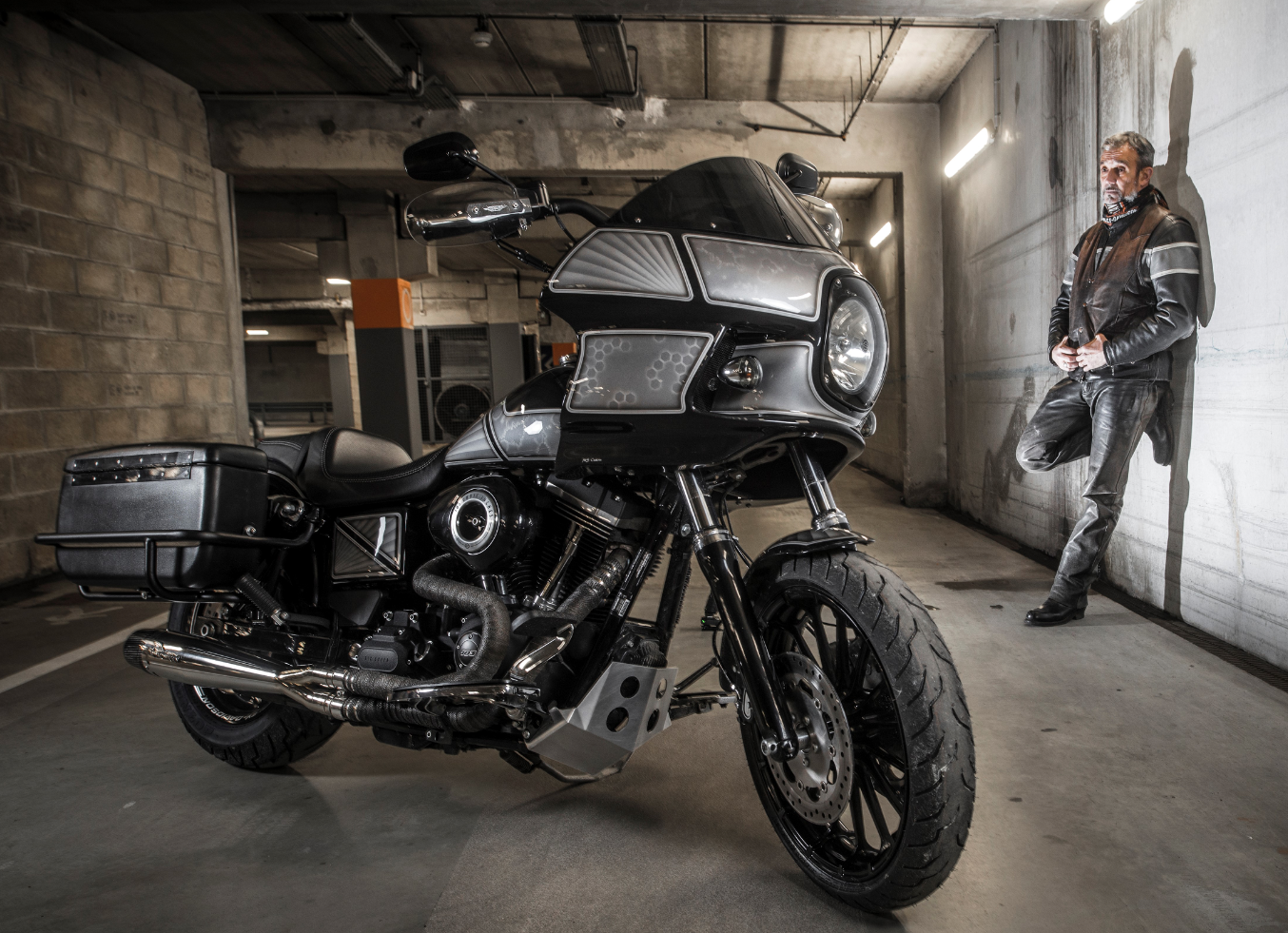 I’m a (very young) French biker of 55 who has been living in an eastern suburb of Paris.
From as far as I can remember I ride motorcycles (mopeds first, then motorcycles and even daily a 400cc scooter to avoid being stuck in the Parisian traffic.)
Once in my life, I rode a Japanese bike: the one the school for driving license lend me for the lessons. And since then I’ve only ridden Harley-Davidson motorbikes (about thirty.) I suppose one can say I’m an H-D addict.
I’m a lone rider and I know a lot about the H-D / MC culture, the stories, legends, places, and bikers. But I don’t really belong to this circle. The reason is simple: too many people talk about motorcycles at the bar or at their dealership and at the end …  they don’t ride.
My biker friends use to say I’m a tough rider. Of course I’m not: I just have pleasure, I just feel alive when I ride. Nothing tough in it (but yes, I’m able to ride 800km / 500 miles a day in the rain. I’m a proud member of the American Iron Butt Association for years.)
I have 8000km (5000 miles) by scooter inside Paris and about 25000 km with my Dyna a year (more or less between 30 and 35000km / 22000 miles each year) all over France /Europe and sometimes through the USA.
When I ride, my great pleasure is meeting people along the roads, taking (many) photos and writing stories about these road trips… this is how I met Marilyn Stemp: I wrote an article about the ending of the publication of IronWorks, she saw it on Motomagazine’s blog, sent me an email, and we met in Paris (it’s such a good memory.) Globally, writing permitted me to meet so many other people too…
Oh, I’ve published a book about the Daytona bike week too. And very regularly I write articles for Freeway Magazine and Motomagazine. Till last year, before its disparition, I wrote every month two articles for New York Rider Magazine.
I attended my first Sturgis bike week in 2014, it’s thanks to my bro’ David Uhl who invited me to spend one week in Deadwood where he has every year a booth with part of his team. I already knew many places in the USA but I totally fell in love with this part of South Dakota. Can’t wait till the next edition…

“I’m just a good old boy who loves to ride motorcycles. Back in 1971 I bought an old police Servi-Car to ride to work and ever since I’ve wanted to ride to see what was over the hill or around the next curve. Besides that old Flatty I’ve owned and ridden a Sporty, Pans, a Knuckle, Evos, a Twin Cam and even a SS350 Sprint. Way back when I rode with a local club for a couple years. Unlike some of my friends I never became a 1 per center and luckily stayed out of trouble.

Pointing the front wheels of those bikes down the road for the past 37 years has me heading towards the three quarter million mile mark. Not bad for a guy who’s had to put 40 hours a week in a couple different factories all those years. Yeah I’ve strictly been a blue collar guy all my life.

I’m a rider who writes, not a writer who ridesI’ve ridden a lot of miles, been a lot of places and met a lot of people. I hope to do more of each because I haven’t been everywhere and done all of that, yet.”

In the mid-‘70s Becky Brown transitioned from horses to motorcycles and at that time she knew absolutely no other women riders.  So she placed an ad in the Toledo, Ohio, newspaper asking interested women to join her for a motorcycle ride along the Maumee River.  To her surprise almost a dozen women came out of the woodwork and joined her.  This became an annual event and eventually morphed into what is now an international organization of women riders with over 100 chapters in 4 countries, Women in the Wind.  In August of 2014, WITW celebrated its 35th anniversary in its hometown of Toledo.

Becky has written extensively about riding in general and issues facing women riders specifically. A woman riding a Harleys was far less common in 1975 than it is now. In fact Becky was the first female rider to pen a regular column for IronWorks Magazine, the print version precursor to Iron Trader News, back in 1990; likely the first woman columnist to appear in any nationally circulated motorcycle magazine.

Fast forwarding to the present time, Becky is not only one of the few women to be inducted into any motorcycle Hall of Fame, but she has been inducted into all three!  She was also the subject of a documentary for PBS called “She Lives To Ride,” and chosen for a photo shoot with Annie Leibovitz.  Becky has ridden her Harley solo throughout Greece twice and has toured Tuscany by herself.

She presently has a 2000 Heritage Springer and a 2012 Heritage Classic and says she will probably always be a Harley Girl!