Real gear in real-world use.

A month or so ago, we approached Z1R with a concept: we’d lately become acquainted with
two new riders, each with their own distinct motivations and interests. They were both looking
for reliable, functional gear, though their taste and approach were different. What company,
we wondered, offered the variety, scope of product and quality to cover it all?

Here at ITN, we’d reviewed several specific items from Z1R. A quick google search revealed the
scope and scale of the company’s offerings: the Z1R line includes everything a rider needs and the
styles are fresh. So it seemed like the logical choice. Once we framed the idea and talked it over
with the Z1R team, the plan was set.

So who are the reviewers?
The first, Triston, is a national park ranger in Yosemite. He recently turned to commuting on a smaller
displacement metric bike as a replacement for his gas-hungry SUV, for both the gas savings and to
enhance the experience of living in such a remarkable place. The second, Dave, is a diesel mechanic and
transit worker in Pittsburgh. He started riding about a year ago and has two bike projects in the works; a
custom Fatboy he bought from a co-worker and a 2012 Blackline being upgraded.

We will start with Triston’s unboxing of the gear he received. Once the riders get some miles
down, we’ll be back with more input about how things performed in real-world use.

I’m Triston King and I’ve just recently started riding. I’ve wanted a motorcycle for about
as long as I can remember. I once told my Dad, when I was 12 or 13, that I wanted a bike
instead of a car when I turned 16. I took the Motorcycle Safety Foundation course in my
freshman year of college with the hope that I would start riding then, but that plan never
came to fruition either. It took me until I was 24 to finally get my first bike. Now that
I’ve got it, I’m thrilled every time I get on it and take it out for a ride.

I decided on a small displacement, lightweight cruiser to help me get started riding and
to learn to be safe on the road. It is an 2007 Suzuki GZ250. I know for most riders this
bike would be generally underwhelming, but for a beginner rider I think the low seat
height, easy handling, and easy to manage throttle makes it a great choice.

I commute to work a couple times a week on my bike and have been trying some new
gear in the meantime. I’m looking forward to a summer of nice riding weather and
hoping to log a bunch of miles. Happy Riding! 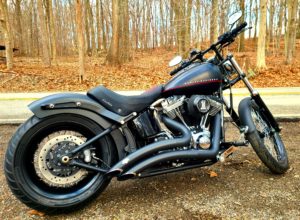