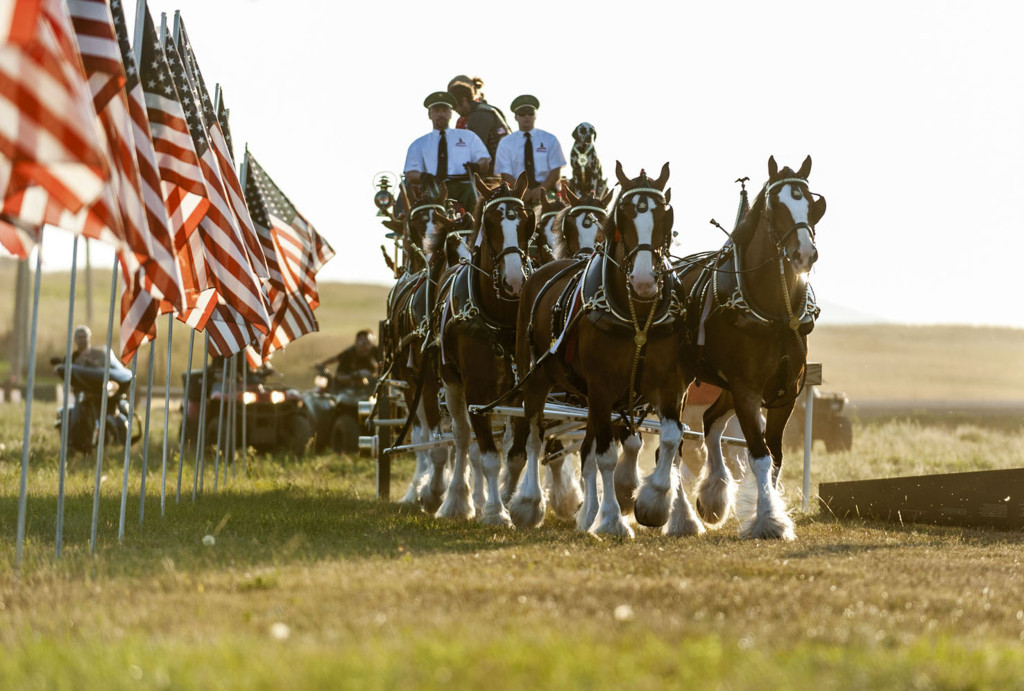 I admit it: Sturgis was a really busy time and I didn’t post nearly as much during the week as I should have. But that fact doesn’t diminish what was my best day at the rally for 2014, the Buffalo Chip’s Freedom Celebration on August 7th. It was a day with all the right stuff: military heroes, motorcycles, spectacle, beautiful riding roads, an appreciative audience, dignitaries, and heartfelt compassion. It also included a chance for all of us to express gratitude to military men and women everywhere, including both the prominent personalities and the everyday heroes who walk among us, all of whom have served us so well.

The day began in Spearfish with the inaugural Freedom Ride, including a performance by the USAF Academy’s band Wild Blue Country and a ride led by Jason Redman, retired Navy SEAL, author and philanthropist. The ride arrived at the Buffalo Chip CrossRoads, for a catered reception, group photo and brief program—still leaving time to see the Veteran’s Memorial Wall or check out the Rat’s Hole Show and the entertainment the CrossRoads had on offer.

As evening approached the majestic Budweiser Clydesdales paused to allow dignitaries to board the wagon then they paraded through the field of 800 flags, bringing special guests into the Chip’s amphitheater for the evening’s concerts and presentations. Thanks to perfect weather, it was quite a spectacle and the ultimate photo op.

The celebration ramped up with the presentation of the newly designated Bob Hanson Distinguished Service Award. Bob, a South Dakota native and veteran of WWII, is a rancher, blacksmith, cowboy, craftsman and war hero. Going strong at 95, Bob was on hand that evening at the Chip wearing the very same Army Cavalry uniform in which he was discharged in the 1940’s. He presented awards to:
Jason Redman, retired Navy SEAL wounded in combat and author of The Trident. He is founder of Wounded Wear and Jumping for a Purpose.
Marine Master Sgt. William “Spanky” Gibson (ret) became the first above-the-knee American amputee to return to combat.
Richard Marcinko, Retired Navy SEAL Commander and Vietnam War Veteran, the first commanding officer of SEAL Team 6 and Red Cell and author of the Rouge Warrior series of books.
Debbie Lee, mother of 2nd Class Petty Officer Marc Lee, the first Navy SEAL killed in action in Iraq, and Founder of Americas Mighty Warriors a respite/retreat for veterans.
And through the efforts of Red Bull, Wells Fargo and Homes 4 Wounded Heroes a mortgage-free home was presented to Lance Corporal Tom Jacobson through the Military Warriors Support Foundation.

As you can imagine, organizing an event of this scope and impact amounts to a full-scale military operation in itself, but according to Buffalo Chip President Rod Woodruff, the Chip family can’t do enough to show appreciation for our military men and women.
“We have great appreciation of the heritage created for us by this country’s Founding Fathers,” he said. “Ours is a national heritage of freedom, honor, pride and courage that has been the envy of the world. No one understands the meaning and the costs of that birthright more than this country’s military service veterans and their families. We’re simply trying to do our part to give everyone a chance to reflect, to celebrate our freedoms and, hopefully, recommit to their preservation.”

Once Woodruff enlisted Hanson’s help in conferring the awards on the recipients, General Clark stepped up to address the audience. He ended his thoughts this way:
“This country was built by people who came from somewhere else, and none of us amounted to much when we came here. America was built by people just like us who had guts, courage, and drive, and we believe in this country. These men and women on this stage, the veterans out here, and all of you are here because you believe in America, so let’s hear it for this country!”

When concert headliner Train took the stage it was a tough act to follow.

Riders who have been at the Buffalo Chip’s Freedom Celebration in the past say it’s not only the best day of the entire Sturgis Rally but it’s the major reason they return every year. I get that.
A field of flags, a wall of tribute, a battlefield cross: all reminders of the precious freedom we enjoy in America. But freedom isn’t a stagnant concept, it has a pulse, a very strong one. That pulse was keenly felt the Thursday of rally week at the Buffalo Chip. It was indeed a day for remembering, and one to remember.