Hey all you East Coast bikers, are you ready to do it again? That’s right the Ocean City BikeFest & Delmarva Bike Week is coming up on September 11-14, 2014 in Ocean City, MD; Salisbury, MD; and Seaford, DE. There will be all kinds of events and vendors at the Inlet and Convention Center in Ocean City including entertainment, exhibitors and concerts including national acts like Jackyl, Travis Tritt, Marshal Tucker Band, and Don Felder of the Eagles. Here’s some of what will be happening:

*A special attraction is the Ocean City BikeFest & Delmarva Bike Show presented by Customization in America (CIA). This 3-day contest kicks off in conjunction with the 2014 Ocean City event. The show has 5 bike classes – FreeStyle – MOD Harley – Retro MOD – MOD Street – Radical Bagger. Think your bike has the stuff, then enter it! Even if you don’t enter a bike make sure to stop by and see some of the best custom bikes in the country!

*Win a Two Wheel Wedding at OC Bikefest – Fast Lane Biker Magazine and Barefoot Bride is offering one lucky (?) couple the opportunity to win a BIKER WEDDING on the Main Stage at the Inlet during OC Bikefest in Ocean City, MD on Saturday, September 13, 2014.

*Nascar Simulator – Experience the thrills and the excitement of the track as you sit behind the wheel of a full size NASCAR Simulator and race the latest fully interactive NASCAR race game while the crowd watches all the excitement on the large external Pit Box Monitor.

*The Ives Brothers “Wall of Death” – A one of a kind motorcycle stunt show that is sure to thrill and amaze you! Witness stuntmen riding their motorcycles and a high powered go-kart on a 15ft vertical board wall. 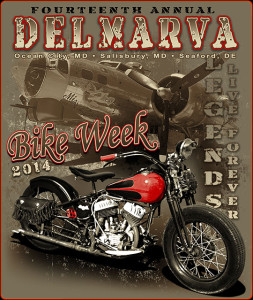