Skip to content
May 12, 2021 – Sturgis, SD – On April 25,2020, the world lost one of the good ones. “Good Time Charlie” Brechtel was taken in a tragic motorcycle accident. Charlie was a musician and a lifetime motorcyclist who spent his days spreading the good word of “Motorsickilism,” the brotherhood and camaraderie that bonds those that have a love affair with the motorcycle.
In Charlie’s memory, and in the spirit of the great thing he liked to call Motorsickilism, this incredible handcrafted 1961 Panhead Chopper is being raffled for $20 per chance or 6 opportunities for $100. On Friday, August 13, 2021, one lucky winner will be selected randomly to be the caretaker of Charlie’s legacy. 100% of all monies raised will go directly to the Sturgis Motorcycle Museum in Brechtel’s honor. This is the perfect way to end this story and maybe the only one that makes sense in the wake of such a tragic loss.
This bike was originally built by an outstanding group including Mondo Porras of Denver’s Choppers, Steve Massicotte and Kyle Brewer of Paughco, Panhead Billy at B&B Racing and, Dennis SanFelipo, with many others contributing along the way. Originally this bike was meant to be part of the legend of the most perfect chopper ever built. After Charlie’s premier motion picture effort in “Rebels On The Highway,” creator Brechtel set his sights on the second film derived from our culture titled “Rough Boys.” This time the storyline would reveal a host of clues throughout the film that would lead moviegoers on a scavenger hunt that would see one lucky winner end up with the Golden Pan and $10,000 cash. Some swore they had seen it; others doubted it existed; however, in the quest for it, the very bike you see before you was built. Unfortunately, before finishing the movie project, Charlie was tragically taken from this world. After a long time grieving, the group that had Charlie’s back throughout the project knew it was time to do something with the Golden Pan. It was decided that there was no better way to honor Good Time Charlie’s legacy than help preserve motorcycle history.
The Sturgis Motorcycle Museum and Hall of Fame is honored and humbled to be the beneficiary of the kindness and generosity of the motorcycle community.
For an opportunity to own this one-of-a-kind Chopper and a little bit of motorcycle history, visit:
https://rafflecreator.com/pages/49273/charlies-golden-pan-to-benefit-the-sturgis-motorcycle-museum
Let’s put Charlie in the history books for one last great accomplishment. 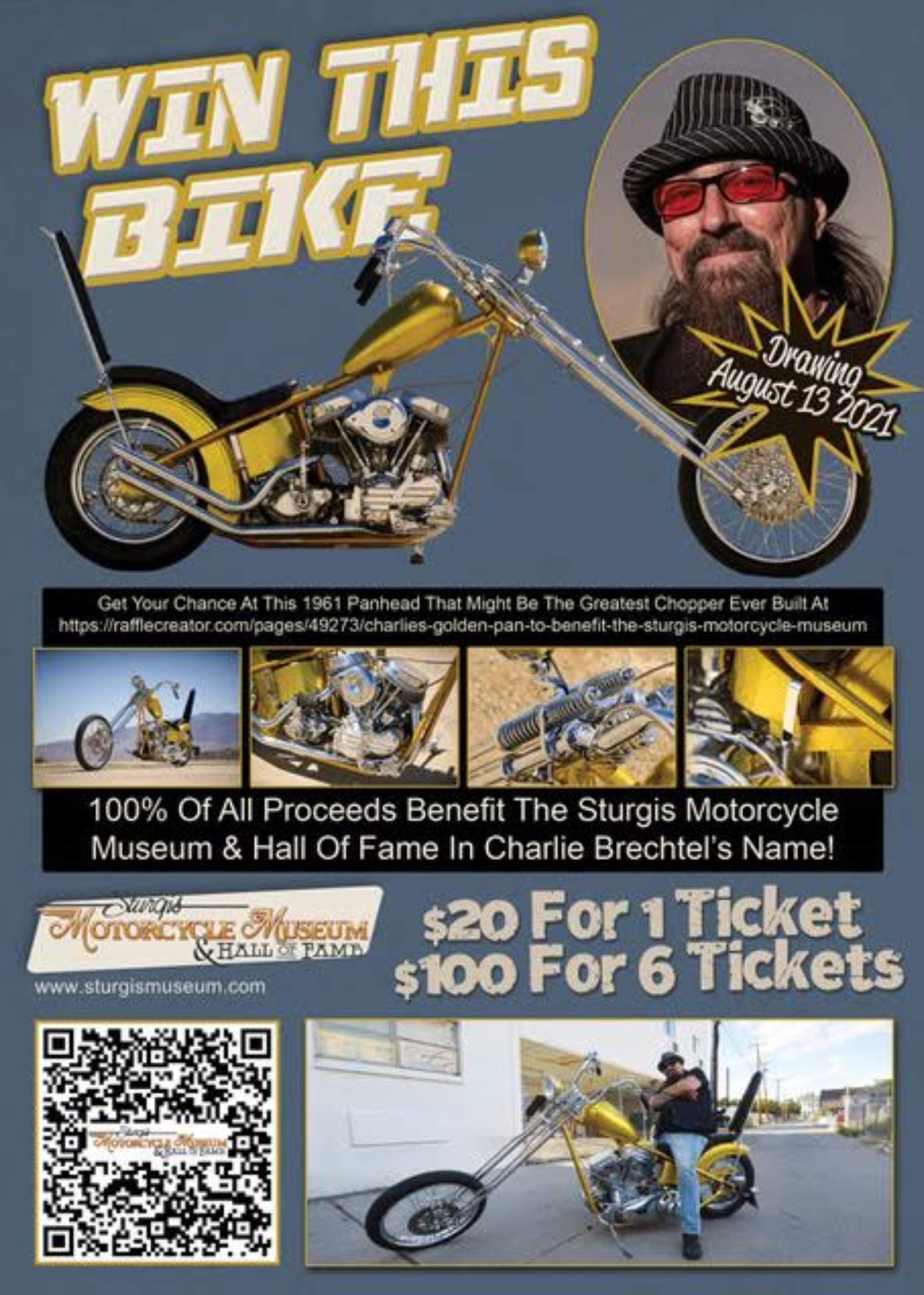