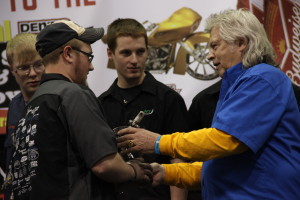 School, where they helped to build two world-class custom motorcycles under the instruction of some of the industry’s most celebrated customizers. 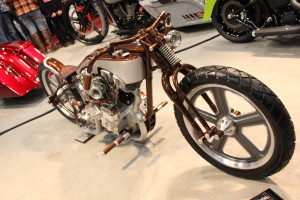 “The kids worked very hard for these awards and the scholarships we are offering with this program,” says Rod Woodruff, president of the Sturgis Buffalo Chip. “Their dedication has paid off. We are very proud to be a part of their success.”

The 2015 Buffalo Chip Challenge program, themed “When 2 Legends Collide,” pitted superstar bike builders and tutors John Shope of Dirty Bird Concepts and Paul Yaffe of Bagger Nation in a head-to-head competition. Shope’s team worked to customize the Indian, and Yaffe’s team transformed the Harley. While Team Shope came out as the winner at the Donnie Smith Show, all of the students came away victorious, learning valuable lessons from the best in the business. The two custom motorcycles will go head to head once more when the Sturgis Buffalo Chip® auctions both off Monday, Aug. 3, 2015 in support of its signature Legends Ride®.

Those interested in bidding to win one of these award winning bikes can visit LegendsRide.Com or call (605) 347-9000.

About the 2015 Buffalo Chip Challenge™

The Sturgis Buffalo Chip® continues its commitment to education and the growth of South Dakota’s motorcycle industry with its fifth annual Buffalo Chip Challenge. The program utilizes award-winning veteran custom builders, Keith Terry, Randy Cramer, Nick Cramer, John Shope, Paul Yaffe and Dave Perewitz to serve as instructors and mentors to students customizing two stock motorcycles. The goal is to develop students’ skills and knowledge in a real-world experience they can use after graduation. Throughout the years, the custom creations produced in the Buffalo Chip Challenge have received much acclaim at prestigious motorcycle competitions, including winning first place in the Full Custom Bagger Open Class at the Donnie Smith Bike Show.