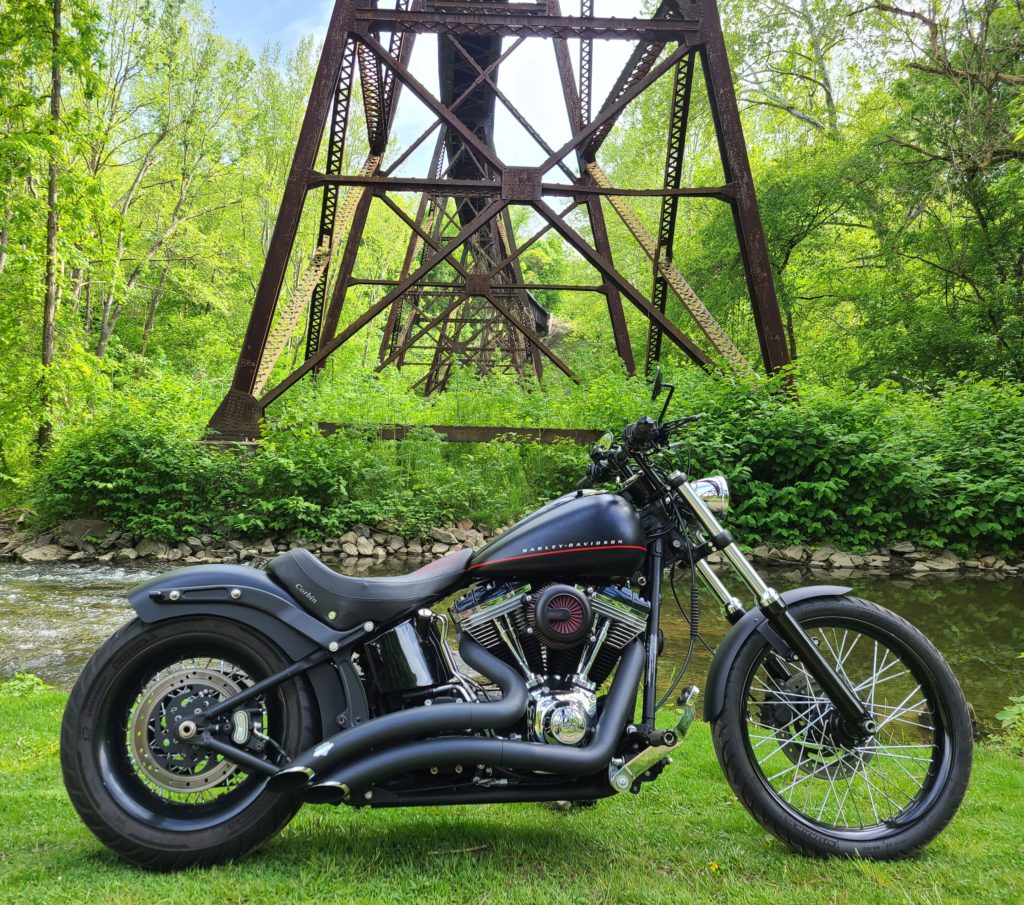 As expected, springtime in Pittsburgh hasn’t let anyone forget how moody Mother Nature can be. (Actually, she
seems like the type of girl I’d have tried to get to know, in my past). Frosty mornings that take your breath away at
6:00 am turn into 90-degree afternoons that leave you dripping in your riding jacket on the way home from work. Just when you think you have it figured out, she gives you a crap sammich of gale force winds between 48 hours of non-stop rain. Despite this, I’ve managed to get miles in the saddle, blow the cobwebs off, and clear the carbon from the
pipes.

I’m not trying to grab attention by being shiny, in your face, screaming “HEY, LOOK AT ME.” That’s not my style. I’d rather my bike get attention because of its subtlety. At first glance my Blackline doesn’t look like much, but the more you look, the more you notice. For that reason I opted for the Vance & Hines V02 Rogue Intake. With its sleek style, clean look, and unapologetic functionality, it was the perfect fit for this project and it would flow enough air to feed any further endeavors. Finally, as the bike came with the Vance & Hines Big Radius 2 in to 2 pipes, it was kind of a no brainer. 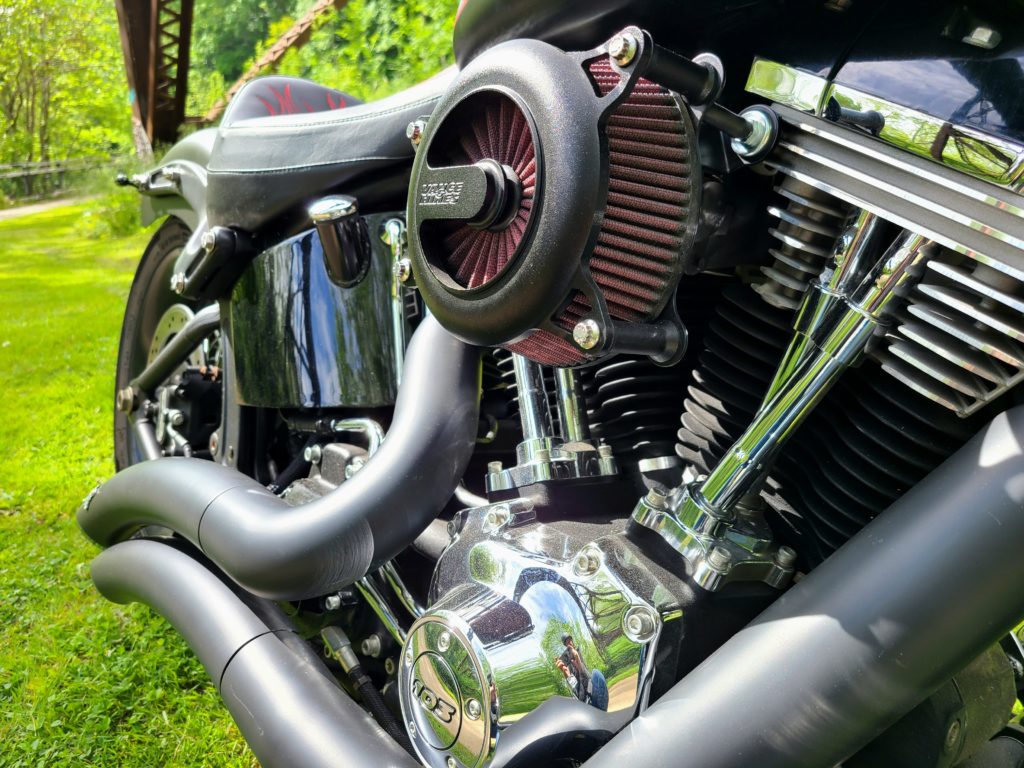 The install of the intake was straight forward and the directions were simple to follow. With nothing more than basic hand tools, it took just 30 minutes. The fit and finish of the intake show that it was artfully engineered and thoroughly thought out. The one thing I really appreciated was the included, polished stainless ARP bolts that resist corrosion while being exposed to elements and contrast perfectly with the matte black finish. 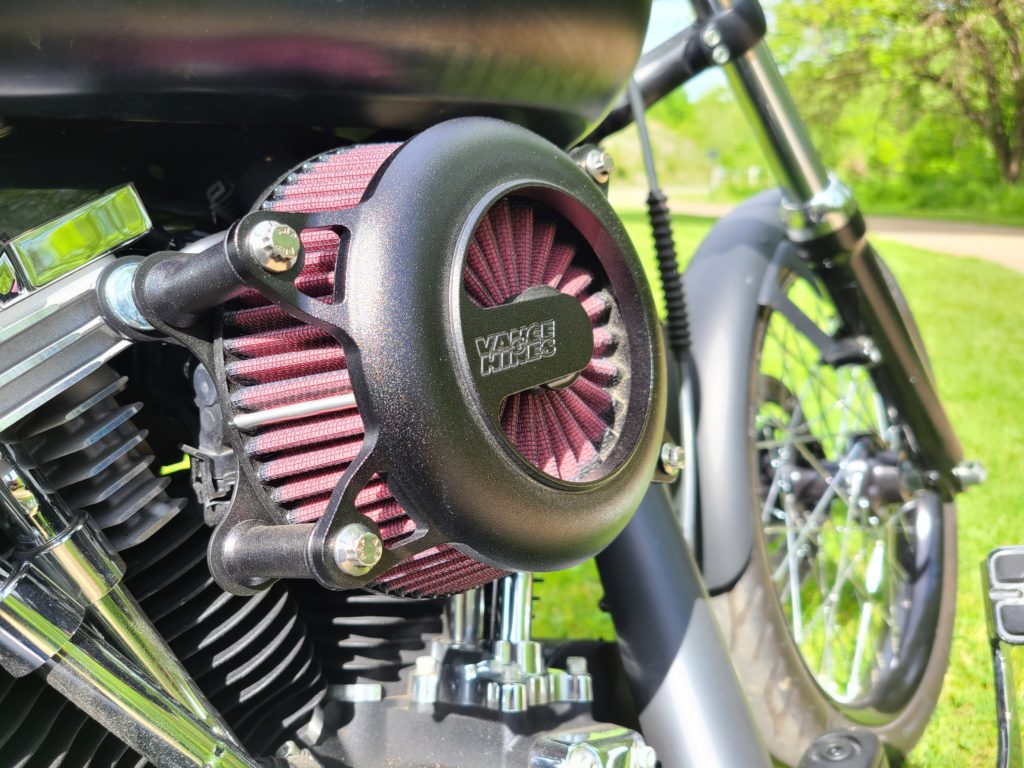 It only made sense that I compliment the V&H intake and exhaust with the FuelPak FP3 to round out the Stage 1 mods. While I was waiting for the package to arrive, I downloaded the FP3 app to my phone and started playing with it, familiarizing myself with its workings in “Demo” mode. I read the reviews and watched the videos so I had an idea of what to expect. 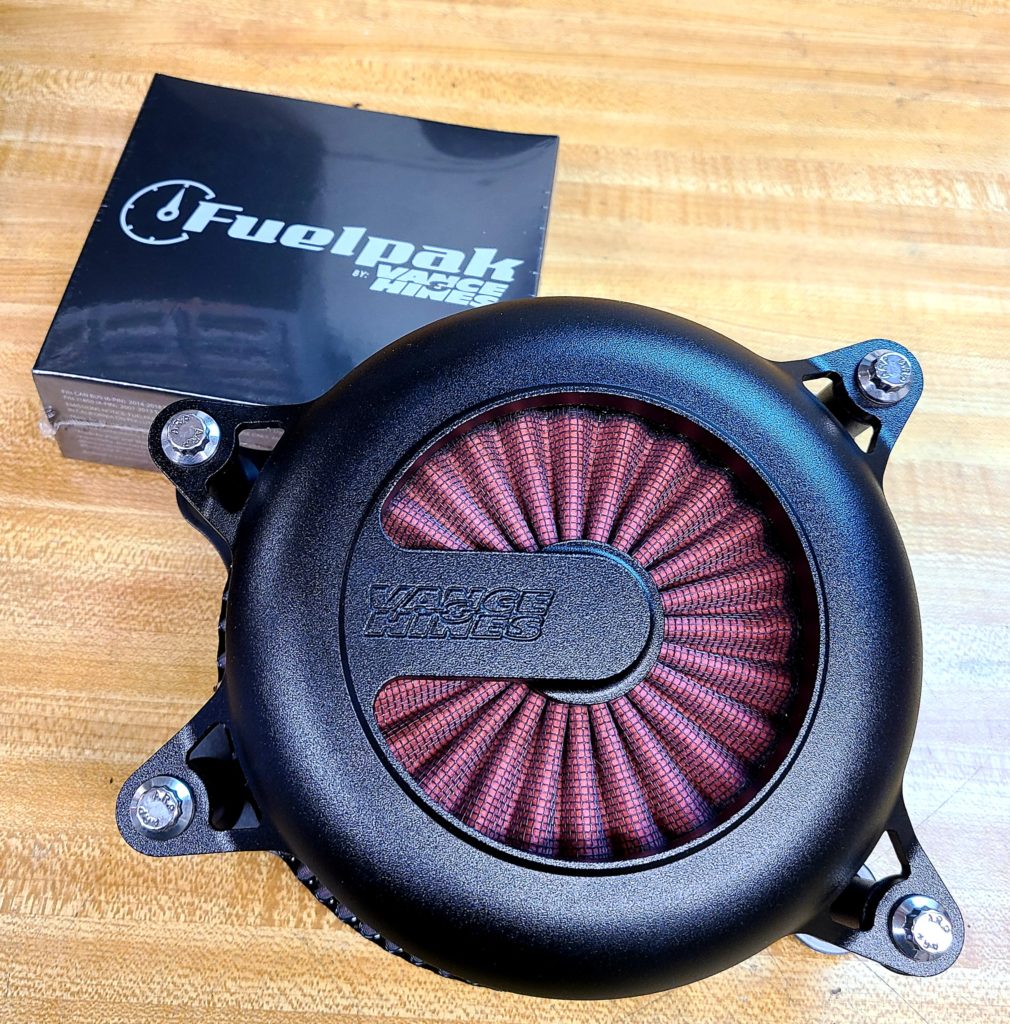 Once I received the tuner, I plugged it in, and simply paired it to the bike and to my phone. Selecting and loading the correct base map for the Blackline 103 with the V02 Rogue and Big Radius pipes was simple. In fact, I was surprised by how many options of pipes and intakes were listed for base maps. While I was there, I lowered the warm idle speed to 900 RPM (personal preference) and set the “Decel Pop” to option 2. One of the things I didn’t like about the bike when I first got it was the pop on decel; Was that something the FP3 could sort out?

After the weather cleaned up a bit, I was able to go out for a first ride with the new intake and tune. It seemed to run cooler, judging by the heat felt in traffic. The decel pop was gone completely, and I was happily satisfied. The exhaust had a bit of rich smell to it, but the bike was running well. After a couple days of commuting, I was able to finally get time to go for a long ride and try the auto tune feature of the FP3. Normally, when making changes to the tune, decel pop, idle speed, loading base maps, etc. you don’t need to keep the FP3 connected. You can make the changes, load them to the bike, then remove the FP3. But when auto tuning, you need to keep the FP3 connected during the ride. Since I made the rear fender on my bike and adjusted the seat to fit it, I didn’t have room to keep the FP3 under the seat while riding. Note that this is a problem specific to my bike, that I caused for myself by making changes to the seat and fender. I managed to find a spot on the left side of the bike, near the fender strut, to hang the FP3 and still have functionality while riding.

With that squared away, I enabled the Auto Tune feature via my phone mounted on the bars. At first I noticed the bike running rough, the exhaust note changed and the engine seemed to be running “dirty.”  None of this seemed out of the ordinary though; the whole point of auto tuning is to figure out where the fuel trim needs to be. Its generally safer to start rich, then lean it out to burn clean. The actual auto tuning ride was quite fun. It was like a game I was playing by myself to get green blocks at all throttle positions and RPM marks on the graph. Some are easier than others, especially in traffic, but others required some hard pulls up an on-ramp to a local highway that’s known for having very little traffic. Once I got a good chunk of the blocks filled green, confirming that the FP3 had learned the needed parameters, I loaded the tune to the ECM.

I was immediately surprised by the change. The engine was running clean, idling smoothly and the throttle response was such a huge improvement. It’s obvious just listening to the bike that it was much, much happier than it ever has been. My uncalibrated butt dyno noticed a difference in how hard the bike pulls. Running through the gears, up an on- ramp was much more entertaining than it ever has been. The exhaust sounded clean, crisp. The engine temp seemed lower, the idle smoother. Being a garage builder, I don’t have hard numbers for power increases. But the general drivability and enjoyment of the bike has been increased exponentially.
There are many more options and parameters that are editable, but they are beyond my needs and expertise so I
decided to not go fixing things that weren’t broken. Some others have made comments about fuel mileage going up
or down before or after a tune… Personally, I don’t give a crap, and I don’t keep track. If I’m on the bike I’m already
saving a ton of fuel by not being in the truck, so I’m not trying to make 45MPG turn into 48MPG. I’m just happy I’m on the bike. 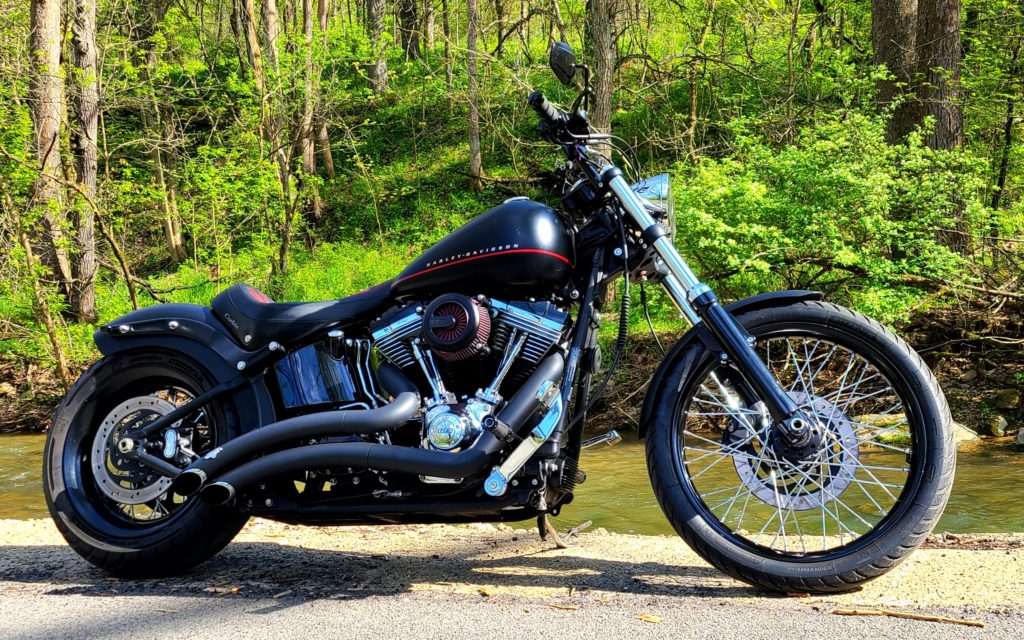 I know many would say that I’m leaving power on the table by not going with a 2-into-1 pipe, and I’d agree. But I’m
not chasing dyno sheets or looking for bragging rights at bike night. As much as I want the bike to be able to provide giggle-inducing acceleration, hair-raising exhaust notes and tire-smoking power, I want to look back while walking away from the parking spot and enjoy the view. The Vance &amp; Hines Big Radius exhaust gives me the sound, the power and the look that I want for this bike. The V02 Rogue intake allows it to breathe well, and the FP3 tuner makes sure they work flawlessly together.

These projects always seem to take weird twists and turns. You change or modify one part and just when you think
everything is good, your past mods seem to expose the next weakest link. The addition of the Vance &amp; Hines stage 1 has revealed that the 30k mile clutch is going to require the next bit of attention. While doing the high gear, full throttle pulls to get the auto tune in line, I discovered that the clutch was weaker than I thought. Between the additional power that was added and high miles on the bike, it was quite easy to drive through the clutch with a twist of the wrist. 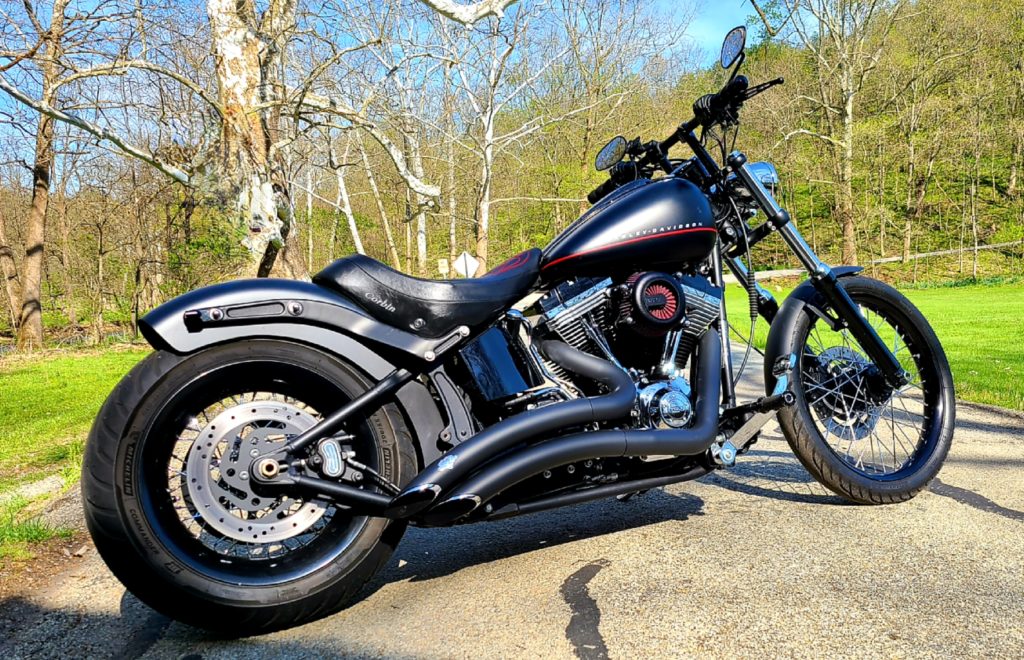 Before I can continue to build more power into the engine, I’m gonna have to make sure I can get it to the ground. As stopping is just as important as going, I may as well have a close look at the brake lines, too… Its looking like I’m gonna be placing an order with Barnett for some much-needed parts. Having never been in the clutch of a bike, this is bound to be a learning experience. But what’s to worry about? It’s all just nuts and bolts, right? 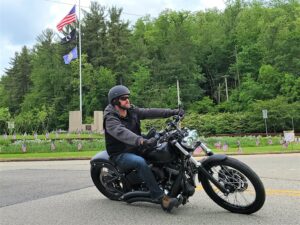