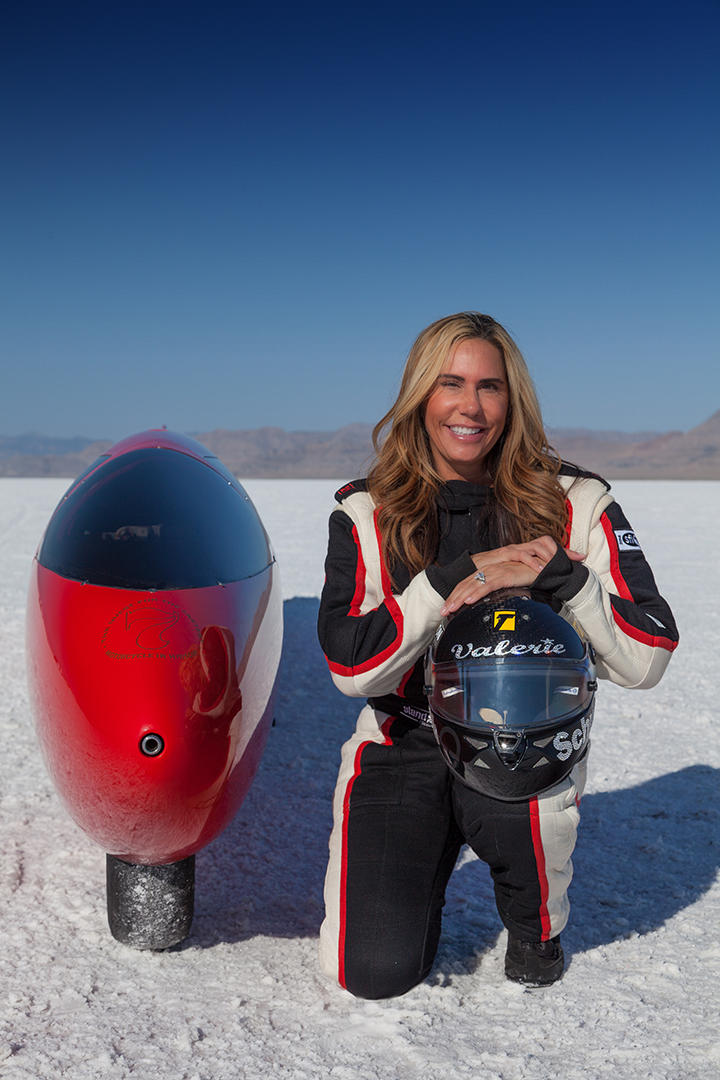 Seven-time record holder Valerie Thompson first female to attempt world’s fastest motorcycle record at Australia’s Lake Gairdner World Speed Trials
Scottsdale, AZ (Feb. 28, 2018) – Valerie Thompson and Team “7” Racing, led by AMA Hall of Famer Denis Manning, journey halfway around the world for their attempt to capture the world’s fastest motorcycle title at the 28th Annual Speed Week and World Speed Trials competition at the Lake Gairdner salt flats in South Australia, March 12-19.
Open to cars, motorcycles and trucks, the 28th Annual Speed Week competition is hosted by the Dry Lakes Racers Australia (DLRA) from March 12-16. The World Speed Trials is a new event for motorcycles only, scheduled March 17-19 and regulated by the Federation Internationale de Motocyclisme (FIM) the global governing/sanctioning body of motorcycle racing as well the American Motorcyclist Association (AMA). Thompson and Team “7” Racing will use Speed Week for testing and tuning, while planning their record attempt during the World Speed Trials.
“I have raced on the dry lake beds and salt flats throughout the US, but I’ve never had the opportunity to race at the Lake Gairdner salt flats. I hope our first visit to Australia leads to my first world speed record in a streamliner with Team “7” Racing, the most dedicated crew I’ve ever worked with,” said Thompson. “It seems appropriate we have to travel half-way around the globe to capture the world’s fastest motorcycle title, a dream I have chased for a long time,” added an optimistic Thompson.
The current record of 376.36 mph (605.69 km/h) was formerly held three times by the Manning-designed streamliner. Less than 10 mph separates the top speeds of the current record holder and the Team “7” Racing entry, setting the stage for the world’s fastest motorcycle title battle being filmed by legendary Hollywood filmmaker Dana Brown and P-51 Pictures, creators of Dust to Glory, On Any Sunday: The Next Chapter and the award-winning Out of Nothing motorcycle racing documentary. P-51 crews have followed the top teams competing for the record from Bonneville to Bolivia, and will join Thompson, Manning and Team “7” in Australia to capture the final event for their feature-length film, Rockets and Titans, scheduled for worldwide release in early 2019.
Thompson stunned the racing world at the 2016 Bonneville Motorcycle Speed Trials with a speed of 304.263 mph (489.663 km/h) piloting the Team “7” Streamliner. On only her fifth run in a streamlined motorcycle, Thompson became the first female driver in a two-wheeled vehicle over 300 mph, also earning the Fastest Time of the Meet award.
Thompson is a seven land speed record holder on a variety of bikes ranging from Harley-Davidsons to BMWs and is a member of six-land speed racing 200 MPH Clubs. She is the only female in history to compete for the world’s fastest motorcycle title and breaking the current record would be her first in a purpose-built motorcycle streamliner.
Valerie Thompson Background
Piloting the Team “7” Racing streamliner, Valerie added a new chapter to racing history at the 2016 Bonneville Motorcycle Speed Trials, earning the “The Fastest Time of the Meet” award with a speed of 304.263 mph (489.6 KMH). She is the first female rider over 300 mph, earning the title of “World’s Fastest Female Motorcycle Racer.” She is a seven-time land speed record holder with membership in six different 200 MPH Clubs and is a lifetime member of the famed Bonneville 200 MPH Club. In 2017, she became the first female appointed to the Bonneville 200 MPH Club Board of Directors. Valerie’s current quest to become the world’s fastest motorcycle racer is being filmed by P-51 Pictures for a worldwide movie premier of “Rockets & Titans” in 2019. Her many racing accomplishments have earned Valerie the moniker of “America’s Queen of Speed” by the worldwide press.
Denis Manning and Team “7” Racing Background
The famed Team “7” Streamliner, aka the BUB 7, is an American-purpose built land speed bike designed by American Motorcycle Association Hall of Fame member and mutli-time world speed record holder, Denis Manning. The vehicle held the world motorcycle speed record from 2006 to 2008 (350.884 mph) and again from 2009 to 2010 (367.382 mph). Team “7” Racing owners John Jans, machinist/builder and Joe Harralson, engineer/engine designer, continue utilizing Manning’s engineering prowess in the role of team leader, with the goal of reclaiming the world’s fastest motorcycle title for the third time. Less than 10 mph separates the “7” Streamliner’s top speed from the current record holder, creating a dramatic showdown between driver talent and engineering ingenuity.