I suppose that, as American biker you still all know about the Rolling thunder ceremony. I don’t think there is an equivalent event in this wild wide world. 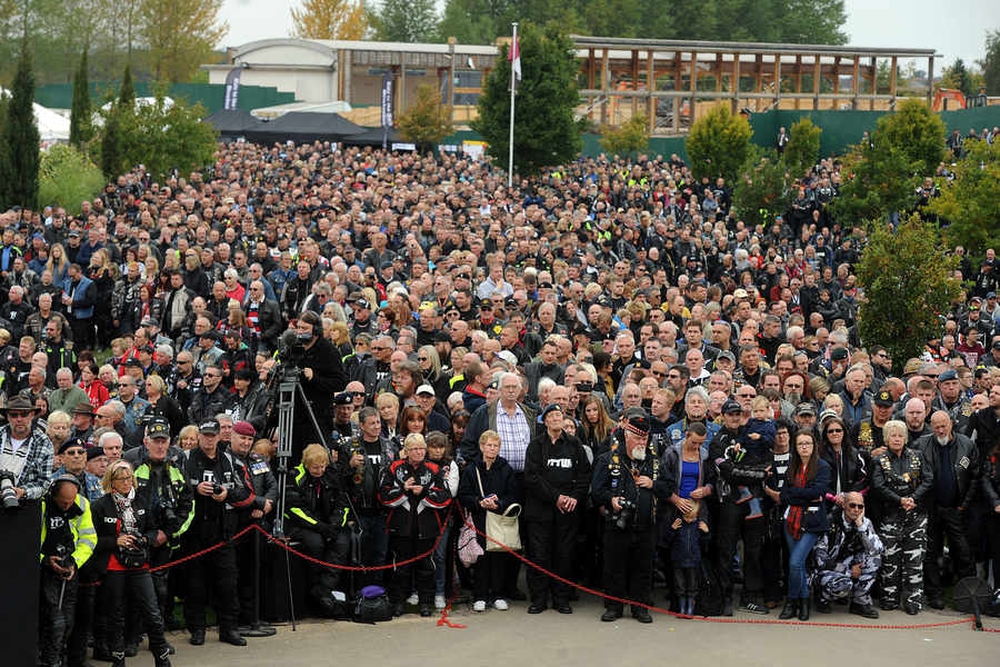 But, maybe my English friends could say I’m wrong. Cause every year, in September / October, in the little city of Tamworth, you can attend the RTTW!!

And, as French biker, I’ve been lucky enough to attend this event some years ago. It’s one of my best memories in my all bikerlife …

So, permit me to improve your international biker culture introducing to your knowledge the RIDE TO THE WALL (aka RTTW). 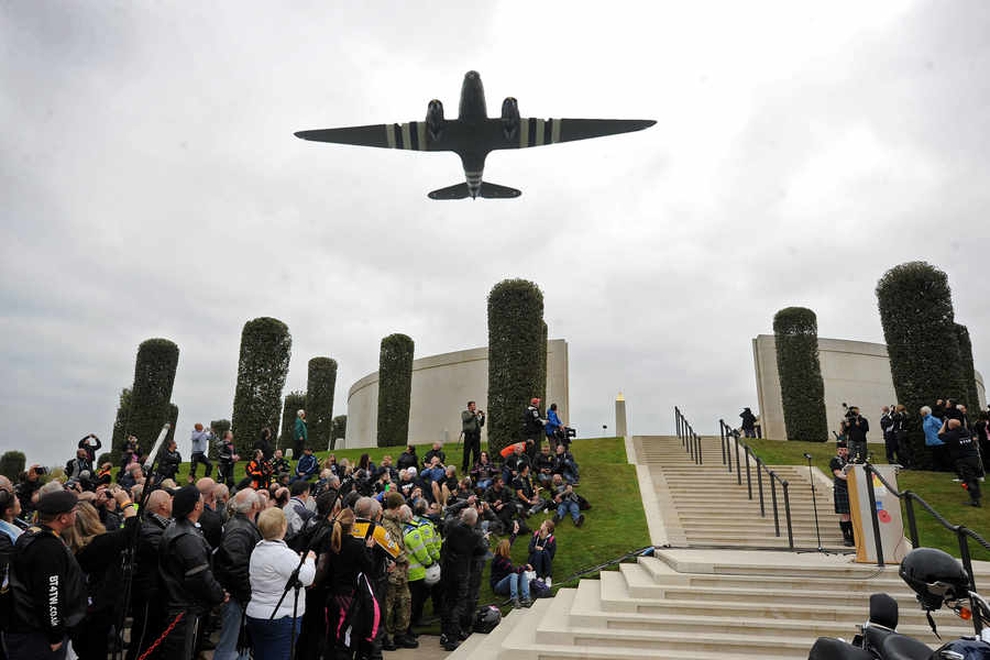 RTTW is a unique motorcycling event which gives motorcyclists an opportunity to gather together at a place of remembrance, to pay their respects to serving and fallen service men and women (of the Briton forces) and in doing so, raise funds solely for the purpose of perpetuating their memory and recognising the sacrifice made.

That motorcyclists may gather together and ride as a group to a place of remembrance and in doing so raise funds for the National Memorial Arboretum (NMA).

Some years ago, (in 2013) I organized the European French stage of the Springer annual rally. It was a blast (40 Springer bikers from all over Europe came to ride one week in Normandy). It gave me the opportunity to meet Steve Harris. A cool guy who had the particularity to work as volunteer for a “strange” organization named RTTW (I was really intrigued by his patches)  … ??????

And this is the story of the RTTW …

In 2007, a certain Martin DICKINSON, the then Director of Nene Valley HOG chapter, rode to the National memorial Arboretum located in Stafford-Shire with a couple of other Harley riders to attend an Armistice service at the Armed Forces Memorial. This memorial, constructed with 200.000 Portland stone-faced bricks, is 43 meters in diameter and is made up of three walls with panels containing the names of the men and women of Briton Armed and Merchant Services who have lost their lives in conflict, as a result of terrorist action or on training exercices since the end of the Second World War. This is the only place in UK that records the names of those killed since that time.

During this visit, Martin decided to do something to enable all HOG members throughout the country to experience what he felt himself and at the same time raise funds for the upkeep of this memorial. The walls of the memorial inspired him to organize an event along similar lines to Rolling thunder, where motorcyclists from all over the USA join an annual organized ride to the American Memorial in Washington DC (I suppose I’m not absolutely wrong saying that Martin Dickinson is more or less the equivalent of Arti Muller and Ray Manzo, historical founders of the Rolling thunder).

Martin outlined his idea at the HOG directors meeting and his own HOG chapter, and both pledged their support. Participants would paid a fee and in return receive a commemorative pin and a year bar. The money raised, once all costs had been covered, would be donated to the National Memorial Arboretum (NMA).

After lot of planning, on Saturday, the 11th October 2007, the first RIDE TO THE WALL / RTTW took place. Hundred of bikes, not only Harleys, and over 1.100 participants, met at Tamworth Service Station and together rode the 17 miles to the memorial arboretum with a cheque of £10.300. The event attracted widespread interest from the whole motorcycling community and at the end of October 2008n “Ride to the Wall” was set up a volunteer stand-alone organization with the remit to organize an annual event.

Since then the organization as grown from year to year. Following this huge success Drayton manor Park became the new starting and assembly point and overnight camping was made available for those riders wishing to arrive the day before.

In 2009, the introduction of online event registration proved extremely popular, with 2.938 people signing up before the day, and together with the merchandise, all available to buy on line, the organiziting team able to make a donation of £29.600 to the memorial.

In 2010 The first Saturday of October was set as the date of Ride To The Wall for this and future years. The event followed the same format as 2009 departing from Drayton Manor Park with 3,300 motorcycles attending.

In 2011 the ride followed the same format as the previous year and monies raised through event registration and merchandising meant that, in March, Martin presented a cheque of £52.750 to the Duke of Kent on behalf of the NMA at the foot of the Armed forces memorial. The event has now been booked at the NMA for the 4 next years and has become a “must do” on many bikers calendar to enable them all to “remember” those who can no longer ride. For this fourth Ride To The Wall a number of new start points were introduced in order to relieve pressure on the numbers at Drayton Manor Park. 3,610 motorcycles participate in this successful step forward in RTTW’s development.

In 2012, The presentation of the cheque for £55,250 is accepted by Pte. Johnson Beharry VC on behalf of the NMA takes place as part of their celebration of Armed Forces Day. 06th October, 5th anniversary Ride To The Wall takes place with 4,400 motorcycles registered.

In June 2013, Ride To The Wall was honoured and proud that Her Majesty the Queen has awarded Ride To The Wall the Queen’s Award for Voluntary Service. The Queen’s Award for Voluntary Service is the MBE for voluntary groups and is the highest award given to volunteer groups across the UK. It is an annual award made to recognize and reward excellence in voluntary activities carried out by groups in the community. It is given for outstanding achievement by groups of volunteers who regularly devote their time to helping others in the community, improving the quality of life and opportunity for others and providing an outstanding service. As the numbers of supporters and attendees increased significantly every year and the size and scale of the organization grew considerably, the requirement for additional volunteers also grew and was met by an ever increasing number of volunteers now totaling almost 300, who unselfishly give up their time. For more information visit www.royal.gov.uk.

The presentation of the cheque for £70,389 is accepted by Cpl. Johnson Beharry VC on behalf of the NMA takes place as part of the their celebration of Armed Forces Day.

The sixth Ride To The Wall takes place with 5,200 motorcycles participating and an estimated 20,000 people attending the event itself. Ride To The Wall becomes the NMA’s biggest single event and their largest financial contributor.

In 2014, a cheque for £82,750 is accepted on behalf of the NMA by Mrs. Pearl Thrumble and the Deputy Lord Lieutenant of Staffordshire. The 4th October 2014, the sixth Ride To The Wall takes place with an estimated 4,300 motorcycles participating and an estimated 20,000 people attending the event itself. This was lower than in previous years but the weather was particularly inclement.

6th October 2017, the tenth Ride To The Wall takes place. Over 6500 bikes participated.

I was lucky enough to attend this amazing event years ago with my semi Irish French rider friend Nicholas and I hope to go back there soon. I was so proud to be part of this meeting as one of the first French citizen attending ever.

Let me know if you come to attend a RTTW. We’ll leave from Paris, shall cross North-West of France to take the ferry an ride together across England to the nice city of Tamworth. It’s gonna be a blast for sure.

And the year after, you will take me to Washington DC to attend the famous rolling Thunder, one of my great project as a biker for the coming years.