Today, I take you with me for a nice ride in the streets of Paris. Follow me in a surprising and instructive quest: the search of the hidden Parisian/French Statues of Liberty. Did you know there are five Statue of Liberty replicas in Paris? 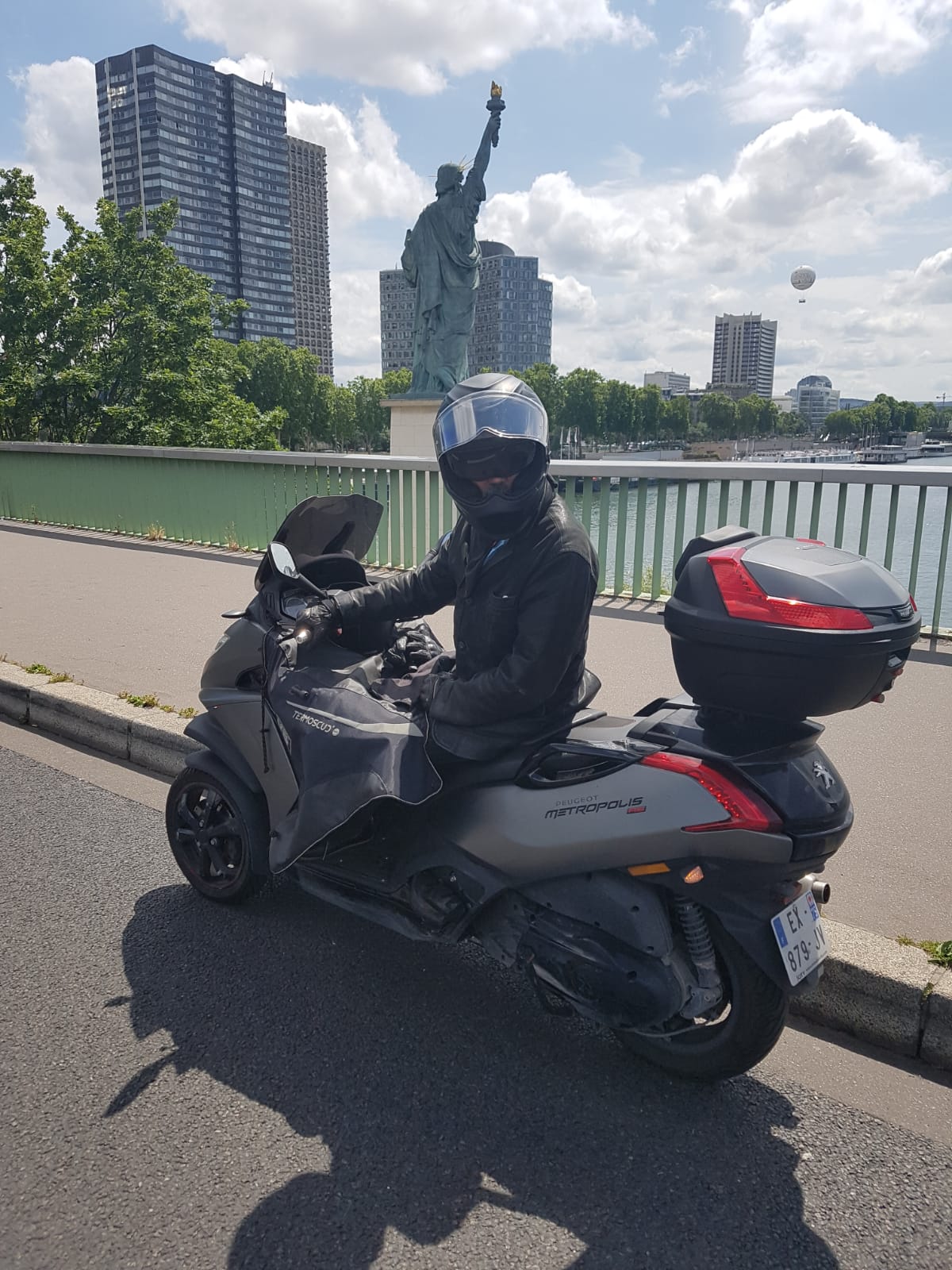 France gave the U.S. the Statue of Liberty in 1886; Americans gave Paris a smaller version of the same statue in 1889. 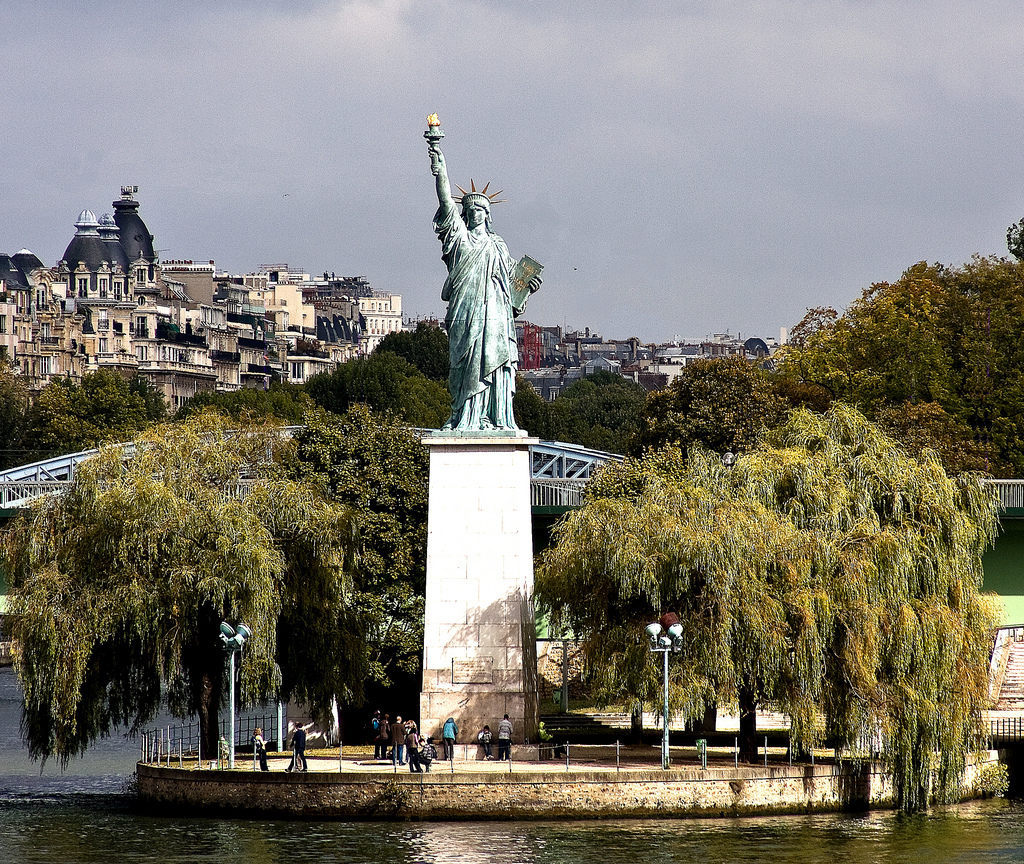 When you are in Paris, there are many magnificent sites one can expect to see from the top of the Eiffel Tower: the Arc de Triomphe; Notre-Dame Cathedral; the Louvre. Something one might not expect to see is a replica of the Statue of Liberty. And yet, just to the south, smack dab in the middle of the river Seine, by golly there it is. 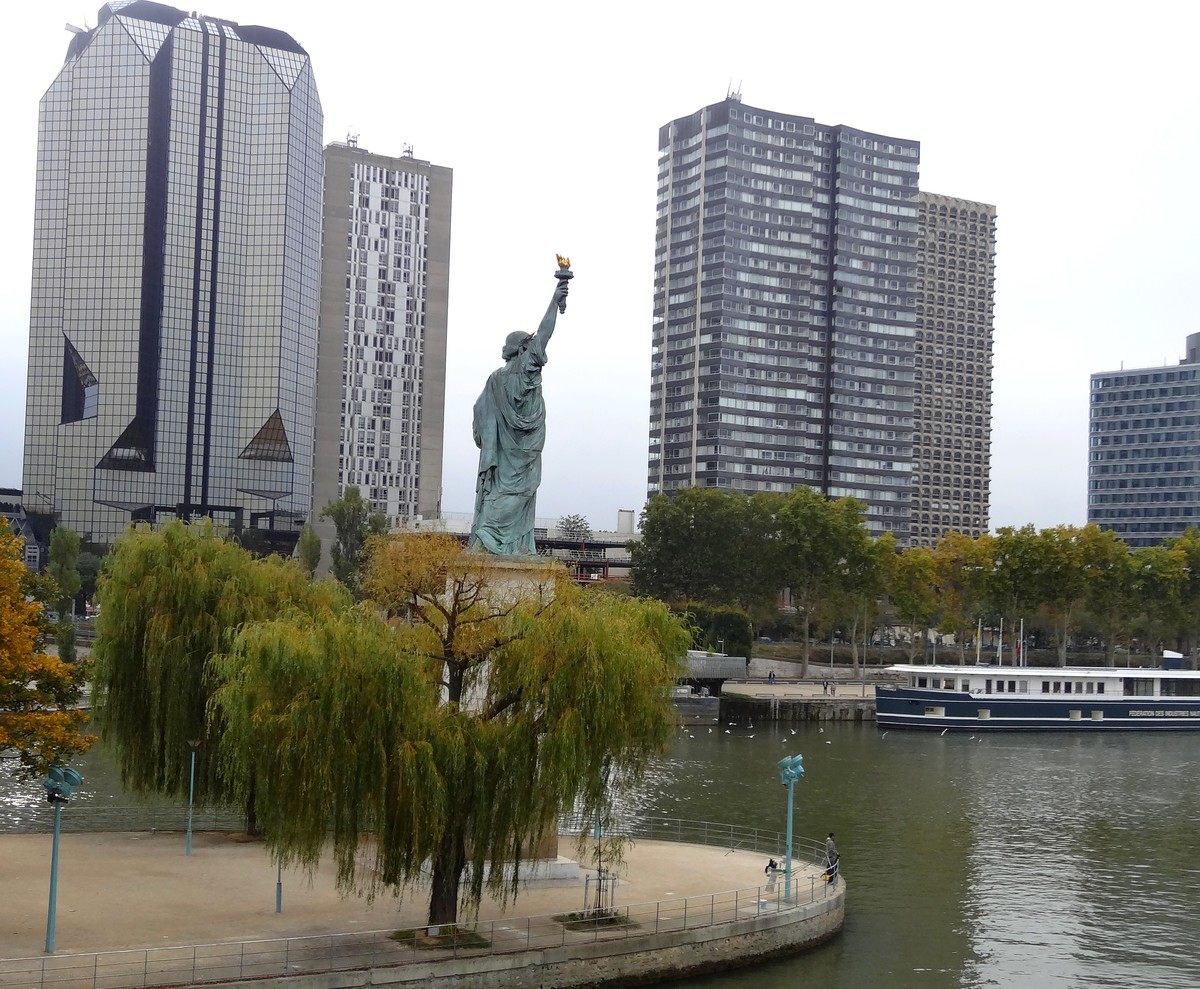 The quarter-scale replica sits on the southern end of Île aux Cygnes, an artificial island built in the Seine in 1827 to separate river traffic from the busy port of Grenelle. Over time, a tree-lined walkway was built that runs the full 850-meter length of the island, and three bridges were built across the island to connect the 15th and 16th arrondissements. Île aux Cygnes is the third-largest island in Paris. The statue itself was given to the city of Paris in 1889 by the American community in Paris to commemorate the centennial of the French Revolution. In characteristic American fashion, the statue was officially inaugurated on the Fourth of July (a date not at all associated with the French Revolution) rather than Bastille Day (a mere ten days later, and often described to the uninitiated as the “French Fourth of July”). To be fair, the inauguration was presided over by French President Marie Fran­çois Sadi Carnot, who probably had other things to do on Bastille Day (also, the statue’s tablet bears the date July 14, 1789, as well as July 4, 1776). The gift was given to highlight the historically close bond between France and the United States, and reaffirm the dedication of the two nations to the republican ideal on which they were founded. 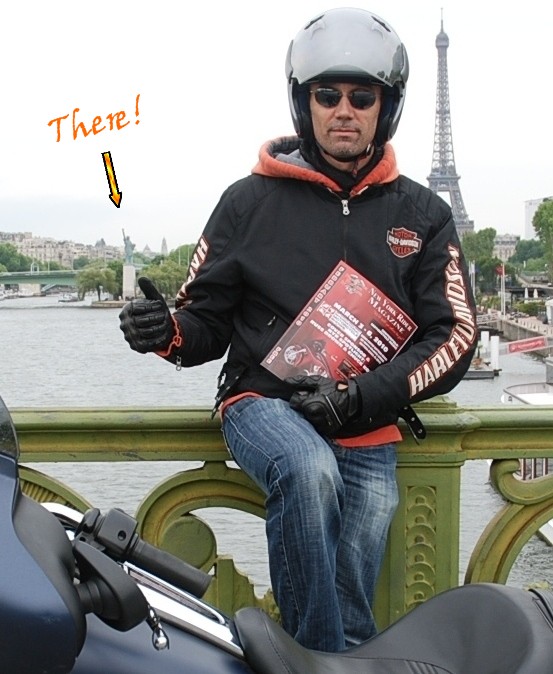 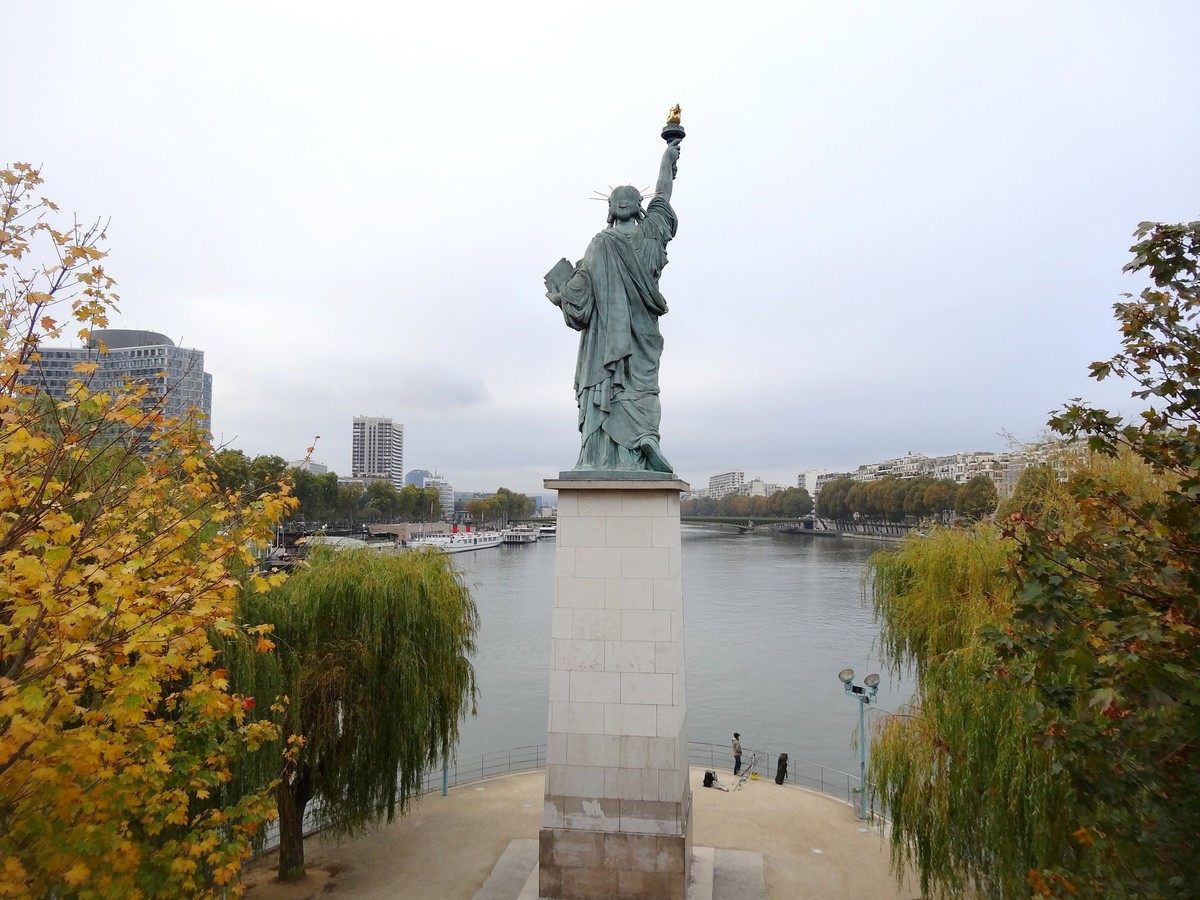 While this is not the only Statue of Liberty replica in Paris—both the Musée d’Orsay and the Musée des Arts et Métiers house their own.

Although the Musée d’Orsay has recently renovated many of its rooms, and is about to continue its ambitious modernisation project in the coming months, there is one exception, an area that will never be altered, and this is the grand central aisle on the ground floor. Its proportions and the light that shines through the glass roof of this former station make it an ideal space for exhibiting sculptures. 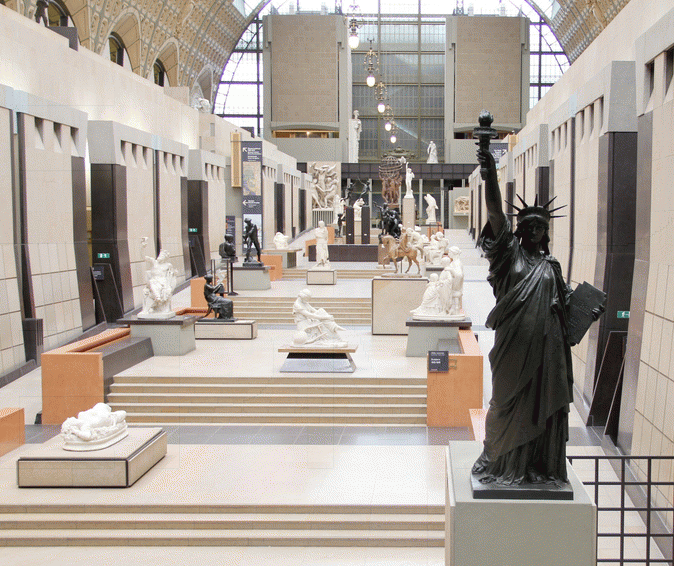 But from the end of June, the visitor will have a different view of the nave as they enter the museum: a small-scale model of the Statue of Liberty by the French sculptor Auguste Bartholdi (1834-1904) has been placed right at the start of the visitor itinerary. There is no doubt that the presence of this world-famous icon at the entrance to the museum, the most important of all American symbols, will very soon become established as one of the most powerful images of the Musée d’Orsay, both as one of the most important art works of the 19th century and for its universal significance. 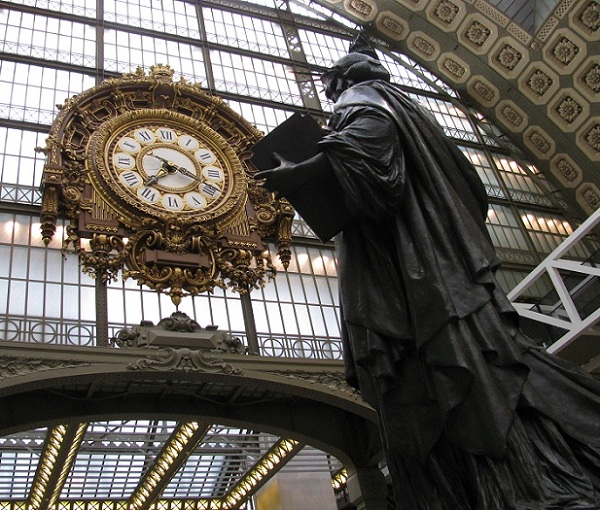 This version, a little under three metres high, was commissioned by Bartholdi himself in 1889, and subsequently exhibited in 1900 at the Universal Exhibition in Paris. That same year, the sculptor expressed a hope that the State would buy it, along with several other models including the Lion of Belfort, for the Musée du Luxembourg (the museum of modern art of its time). He declared that “these works are interesting because they have greatly contributed to the esteem in which I am held by my contemporary artists”. As there were no works by Bartholdi in the Luxembourg at that time, he undertook to give them some in return for the cost of the casting alone. His proposal was accepted, although the museum was unable to find a place for them in their already very full rooms. The solution was found in 1905, after the death of Bartholdi. The sculptor’s widow suggested putting Liberty outside the museum in the gardens. It would stay there for 115 years, from 1906 to 2011, until the Senate, which owns the Luxembourg Gardens, generously agreed to return the work to the Musée d’Orsay. 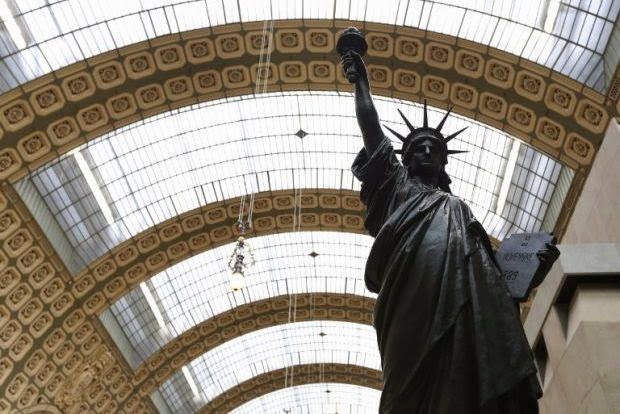 So it is a true museum piece, designed by the artist to be exhibited in a gallery showing the art of his time. This has now been achieved, and we can only rejoice, not only in terms of its conservation, but also because Liberty is an important milestone in the history of 19th century statuary, and consequently considerably enriches the visitor itinerary in the nave. And finally because its universal character can only add to the Musée d’Orsay’s international stature. 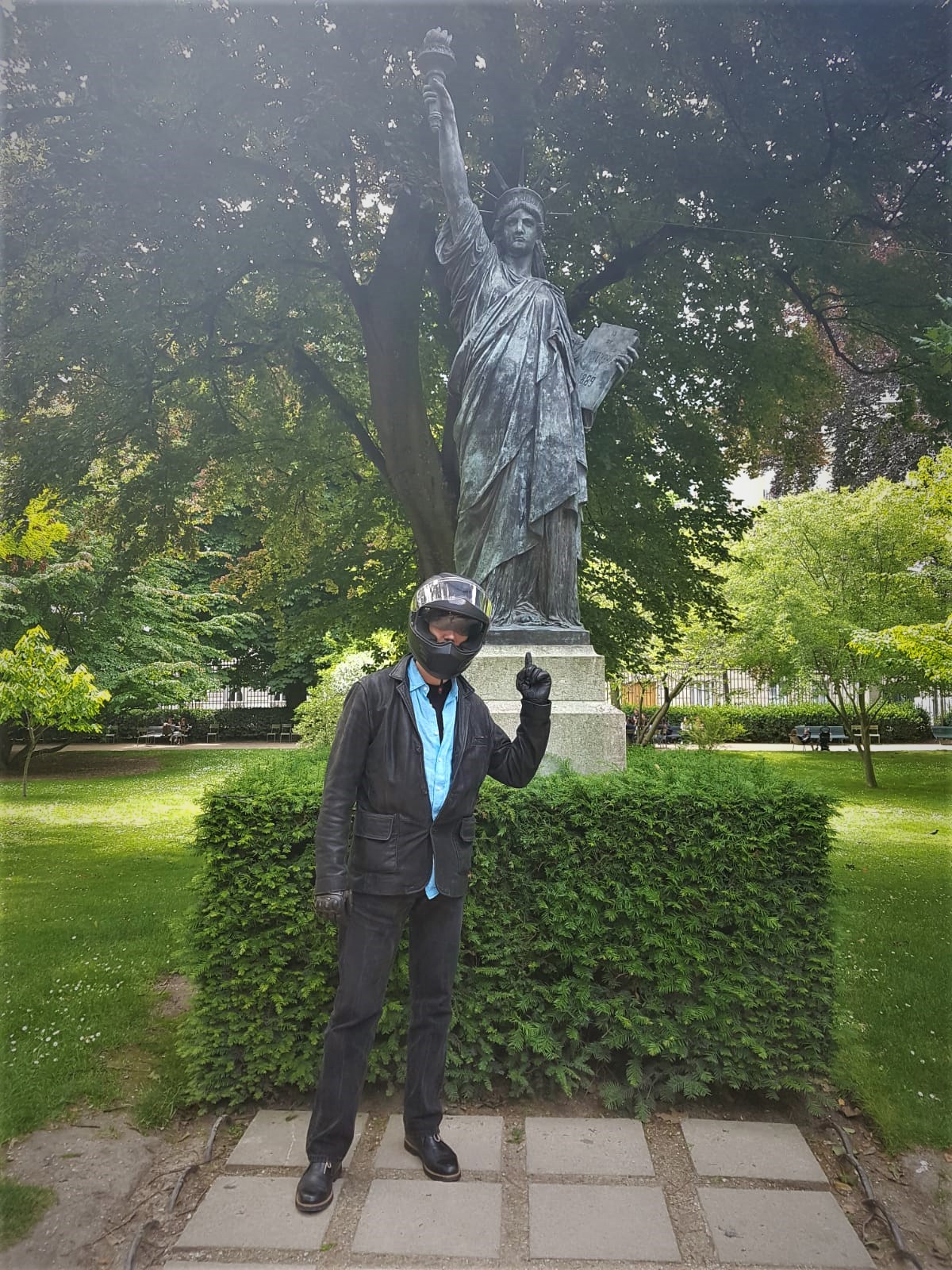 This is the original model for the Statue of Liberty, used by Bartholdi to create the larger version for New York City. The sculptor donated it to the Luxembourg museum for the World’s Fair of 1900 and it has been in this spot since 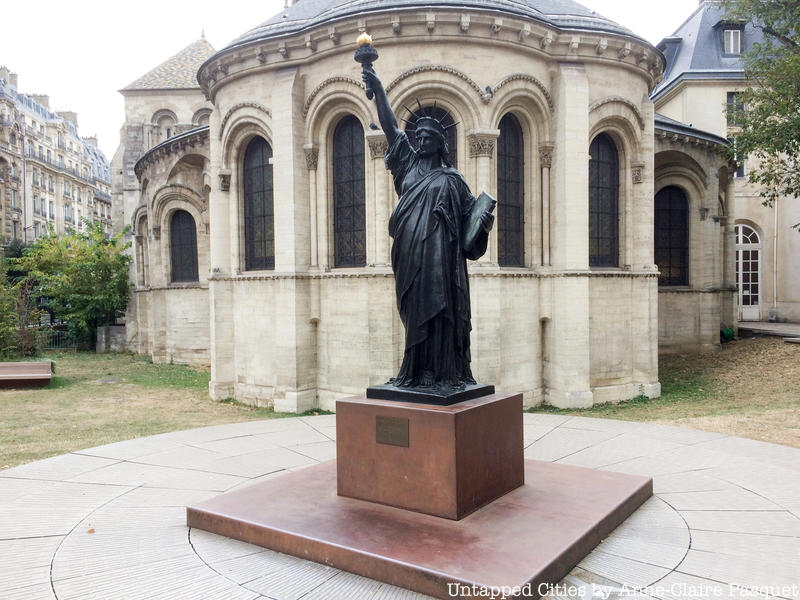 The original plaster sculpture, which Bartholdi used to make his masterpiece, was bequeathed to the museum by his widow in 1907. In 2005, the French art dealer, Guillaume Duhamel, rediscovered the sculpture while accompanying his son’s elementary school class on a visit there. He convinced the museum to let him create 12 casts from the plaster original (the  maximum allowed under French law) and the museum would get to keep the first cast, which is now on view there. 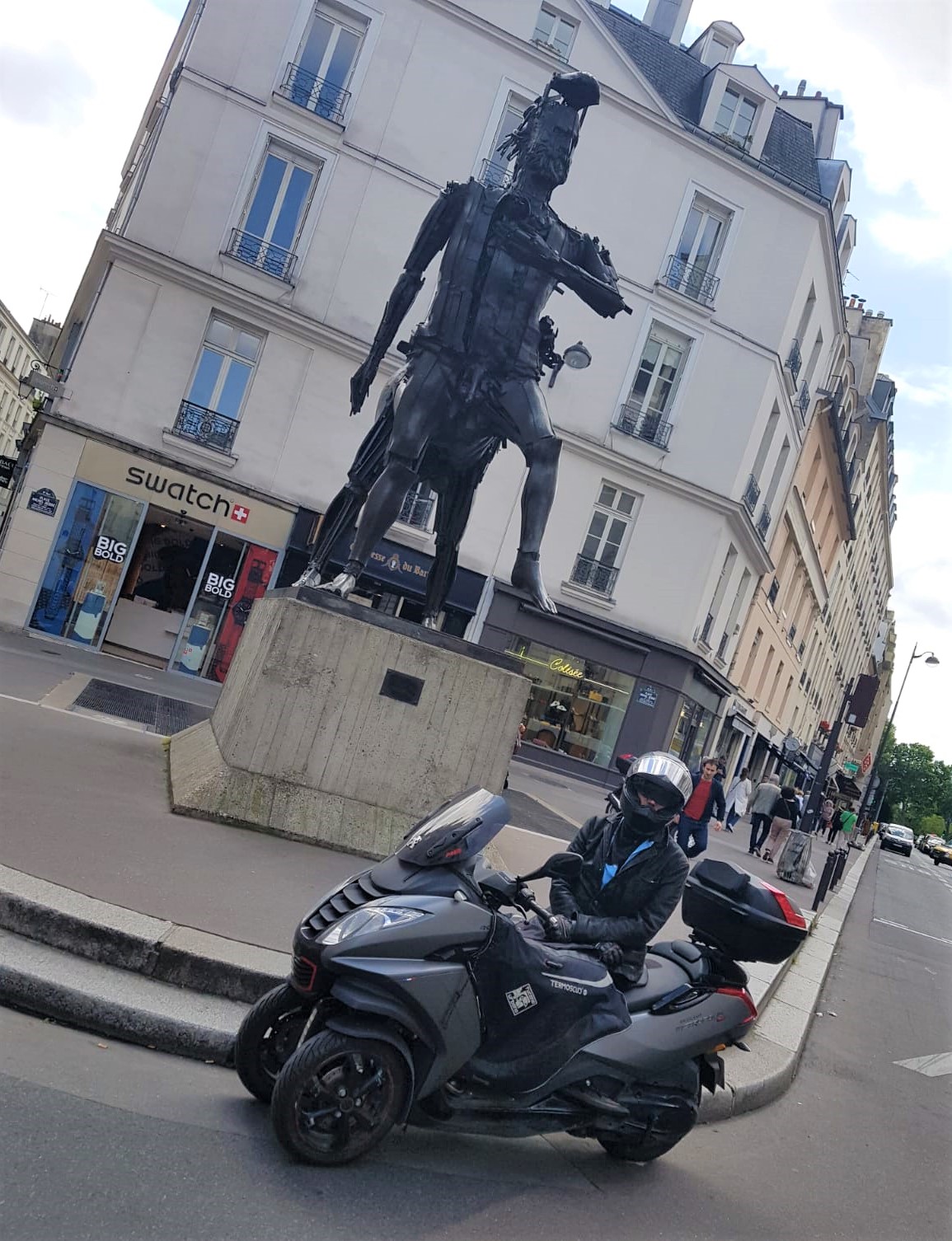 But there is another Statue of Liberty hidden in Paris. Only a few people know of the existence of a very small replica which is part of a much larger statue by César in the 6th arrondissement. Statue of Liberty hidden in Paris? Where to find it? Le Centaure is a 5 meters tall statue in bronze created by French sculptor César (1921-1998). Taking centre stage on the Carrefour de la Croix-Rouge (or Place Michel-Debré) in the 6th arrondissement of Paris, it represents a centaur. This mythological creature consists of a upper body of a human and the lower body of a horse. The head of the sculpture is a self-portrait of César. 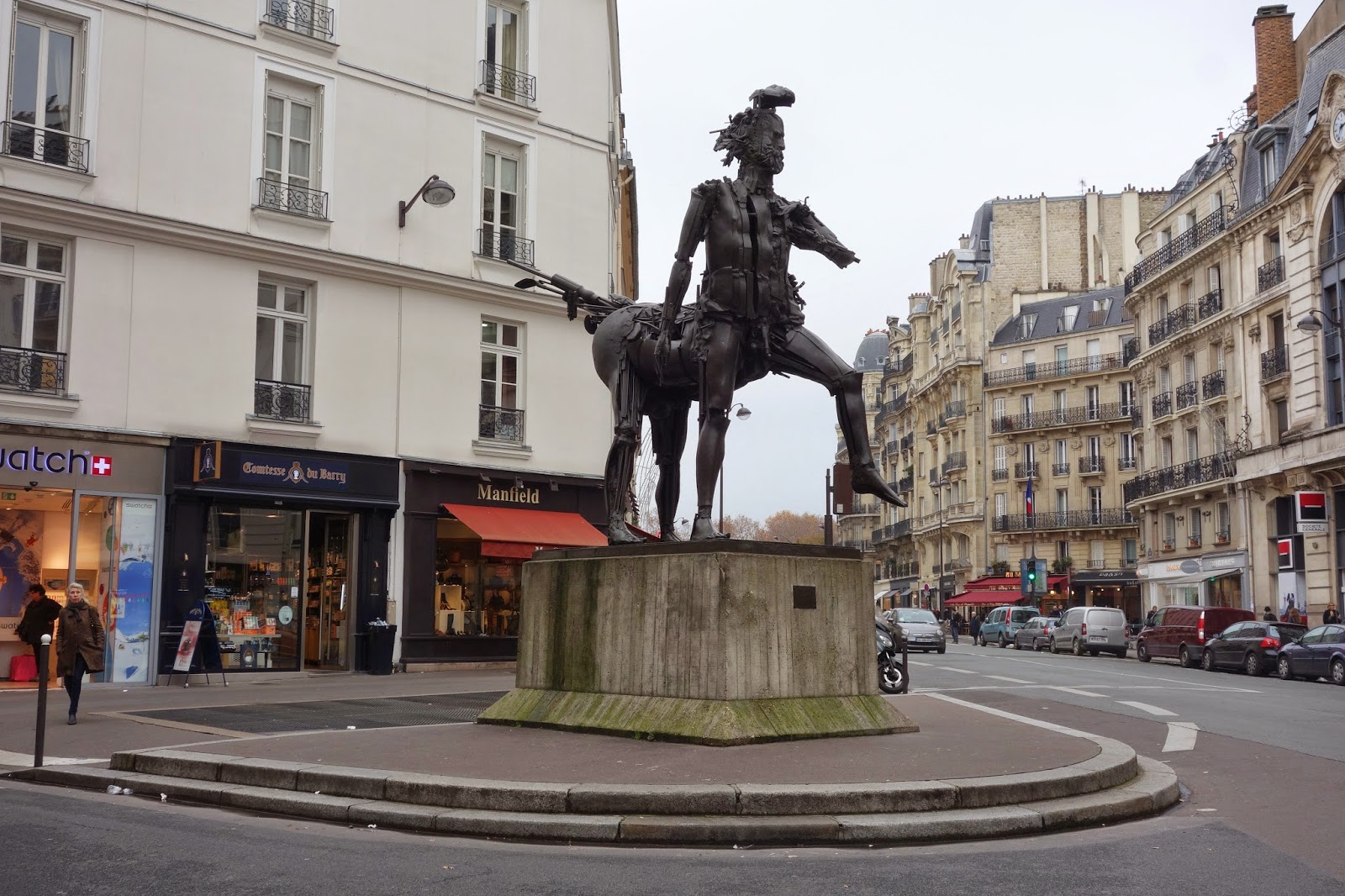 Only a few people know about the existence of very small replica of the Statue of Liberty hidden in plain sight on the chest of the statue. About the size of an adult’s hand, the tiny Statue of Liberty is visible from the front of the centaur. 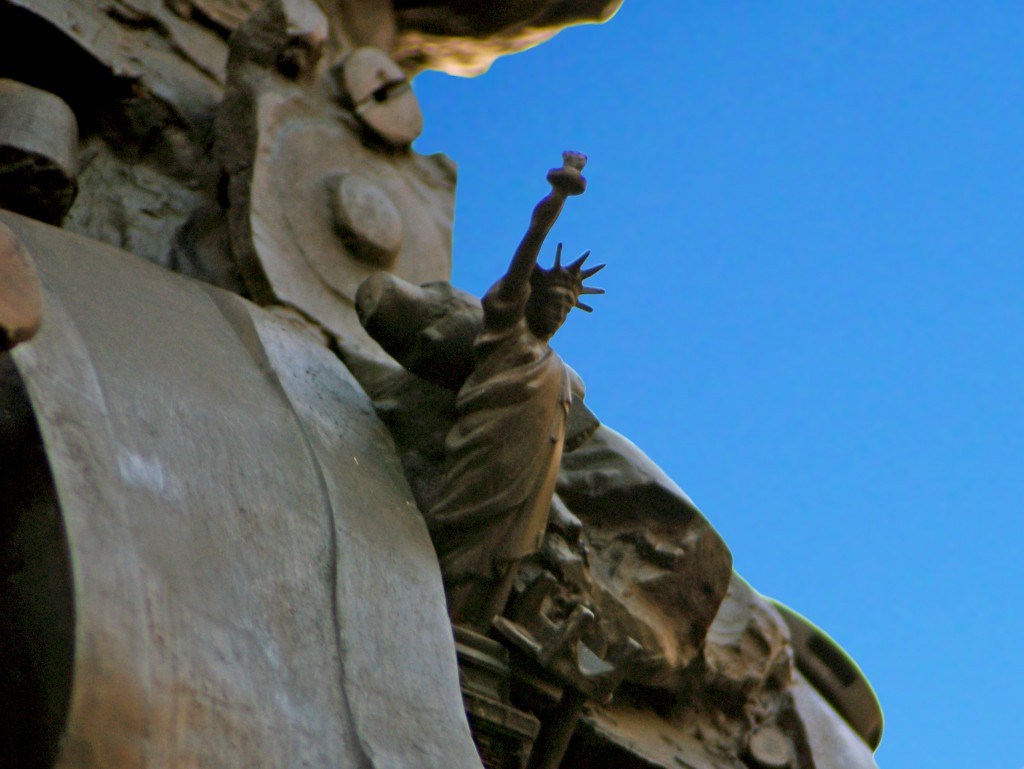 The Flame of Liberty (Flamme de la Liberté) in Paris is a full-sized, gold-leaf-covered replica of the flame of the torch from the Statue of Liberty (Liberty Enlightening the World), located at the entrance to the harbor of NYC since 1886. The monument, which measures approximately 3.5 metres in height, is a sculpture of a flame, executed in gilded copper, supported by a pedestal of gray-and-black marble. It is located near the northern end of the Pont de l’Alma, on the Place de l’Alma, in the 8th arrondissement. 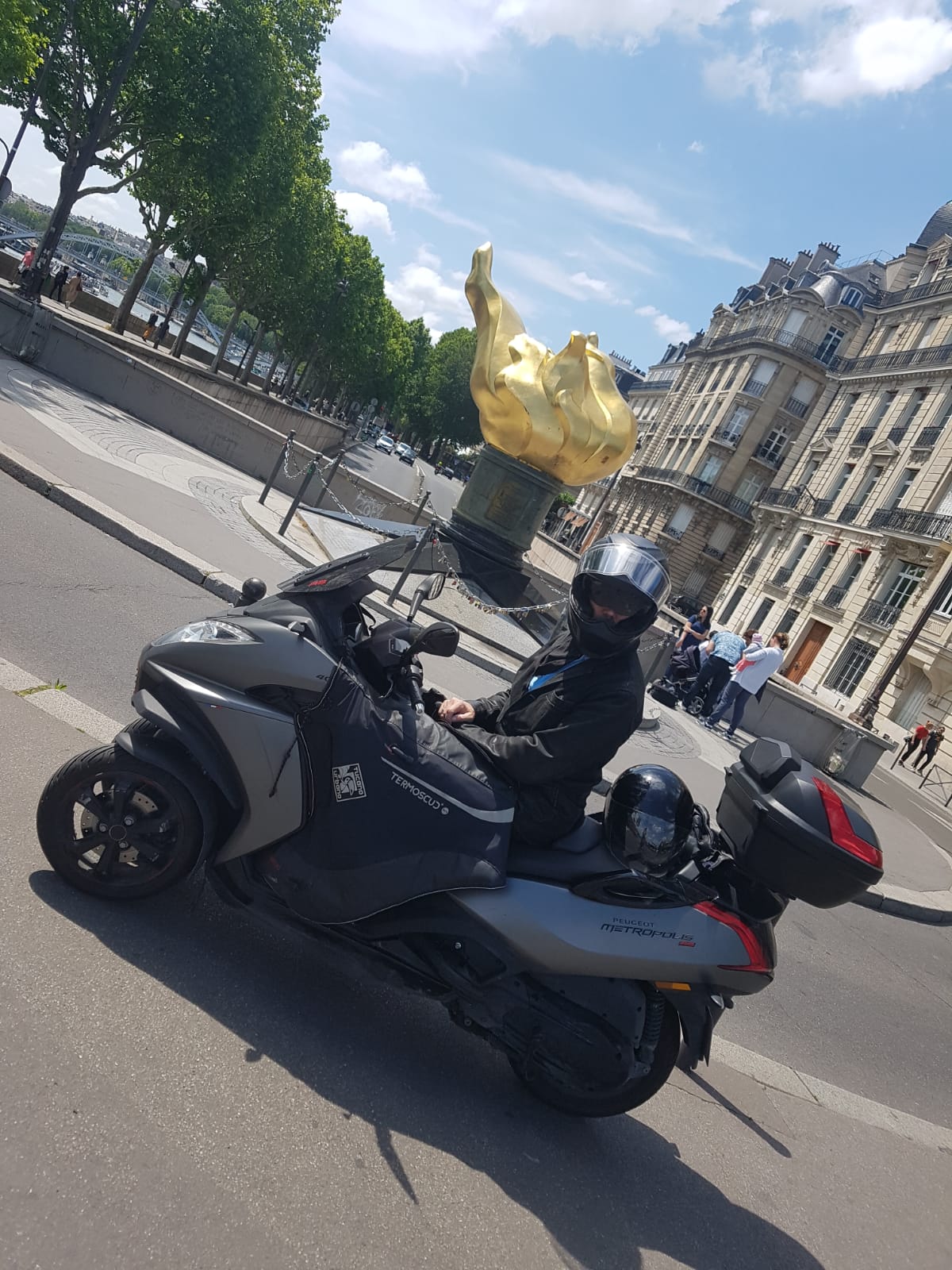 It was offered to Paris in 1989 by the International Herald Tribune on behalf of donors who had contributed approximately $400,000 for its fabrication. It represented the culmination of that newspaper’s 1987 celebration of its hundredth anniversary of publishing an English-language daily newspaper in Paris. More importantly, the Flame was a token of thanks for the restoration work on the Statue of Liberty accomplished three years earlier by two French businesses that did artisanal work on the project, namely Métalliers Champenois, which did the bronze work, and the Gohard Studios, which applied the gold leaf. While the gift to France was prompted by the centennial of the newspaper, the Flame of Liberty, more broadly, is a lasting symbol of the friendship uniting the two countries, just as the statue itself was when it was given to the United States by France. 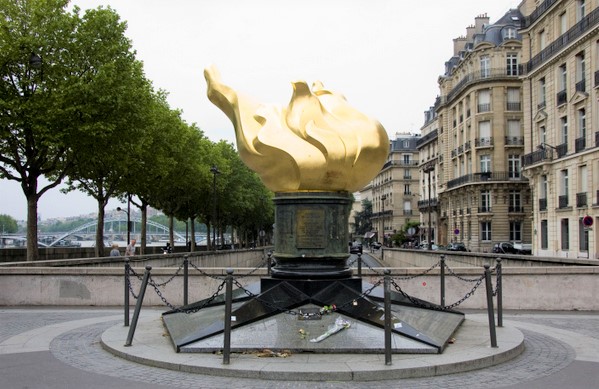 This project was overseen by the director of the French craft unions at that time, Jacques Graindorge. He foresaw an installation of the Flame of Liberty in a public square called Place des Etats-Unis (United States Square), but the mayor of Paris at the time, Jacques Chirac, was opposed to it. After a protracted period of negotiations, it was decided that the Flame would be placed in an open area near the intersection of l’Avenue de New-York (New York Avenue) and the Place de l’Alma. The monument was dedicated on 10 May 1989 by Chirac.

On the base of the monument, a commemorative plaque recounts the following story: “The Flame of Liberty. An exact replica of the Statue of Liberty’s flame offered to the people of France by donors throughout the world as a symbol of the Franco-American friendship. On the occasion of the centennial of the International Herald Tribune. Paris 1887–1987.” 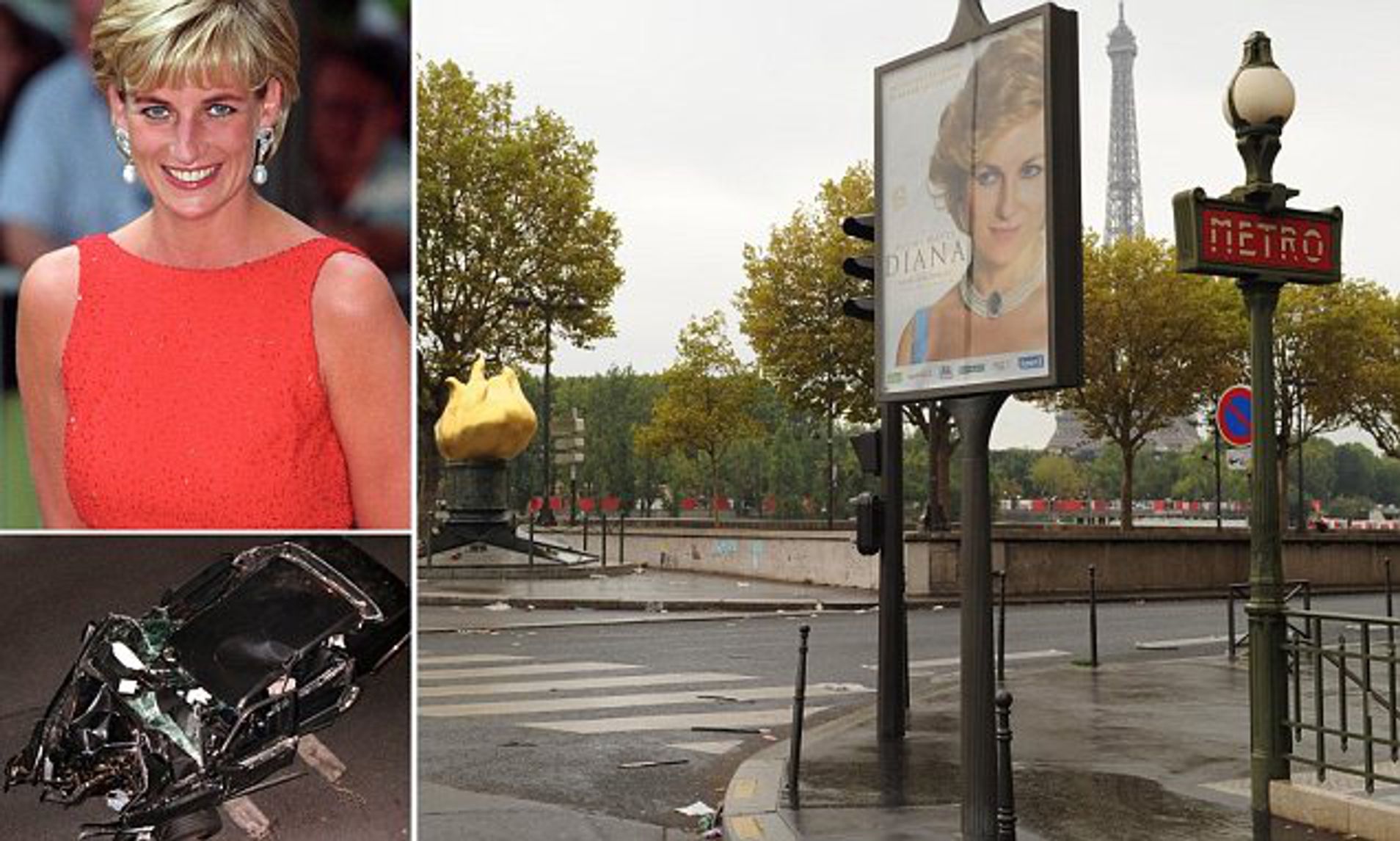 The Flame of Liberty became an unofficial memorial for Diana, Princess of Wales, after her 1997 death in the tunnel beneath the Pont de l’Alma. The flame became an attraction for tourists and followers of Diana, who fly-posted the base with commemorative material. Anthropologist Guy Lesoeurs said, “Most people who come here think this was built for her.” 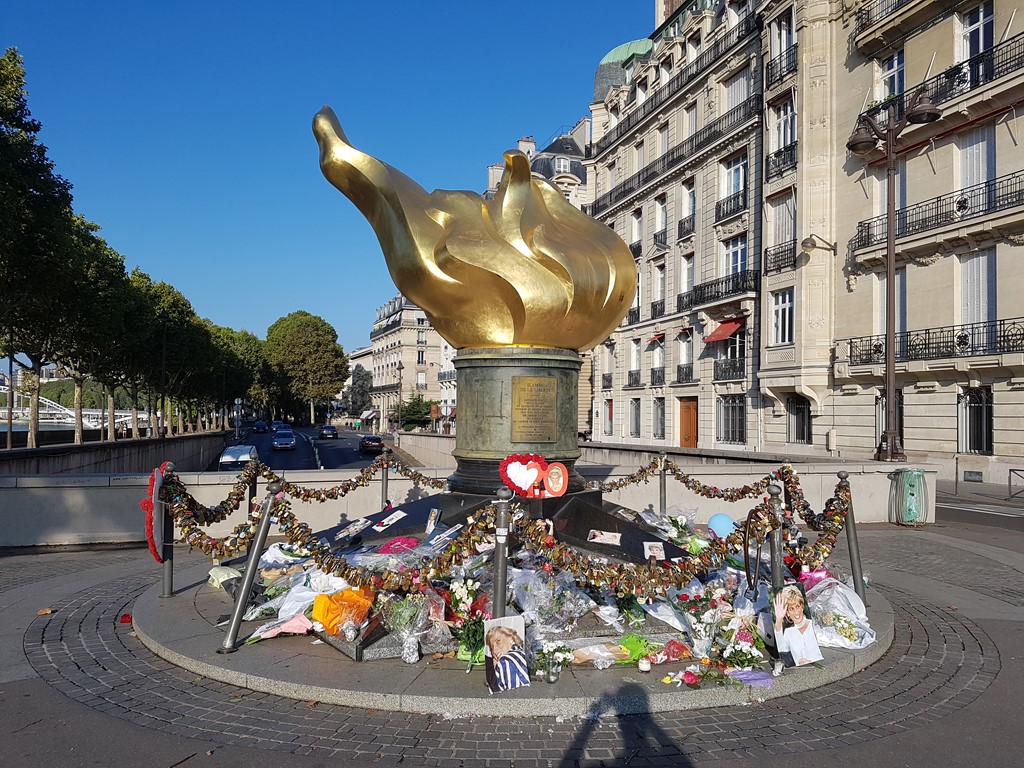 So, next time you will spend some days in Paris, we’ll rent two scooters (it’s better than our big V-twin motorcycles in the heavy Parisian traffic) and I’ll show you all these amazing pieces of art. Don’t forget your camera.