You may remember I spent some days in London / England on this early September. I was a real blast! We went to the famous ACE CAFÉ with my Irish partner in crime Nicholas and were lucky enough to visit London towncenter riding our Harley. It was so cool under a nice Londonian sun on this Saturday afternoon. 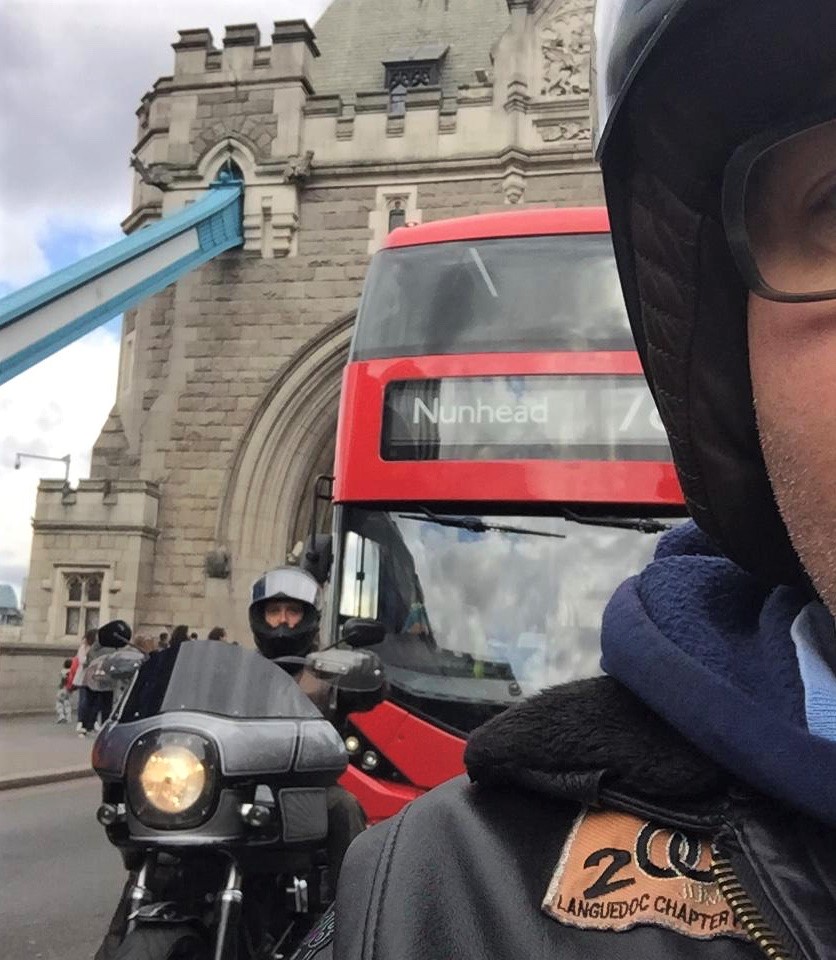 We went to the LONDON TOWER …

We crossed the fabulous TOWER BRIDGES 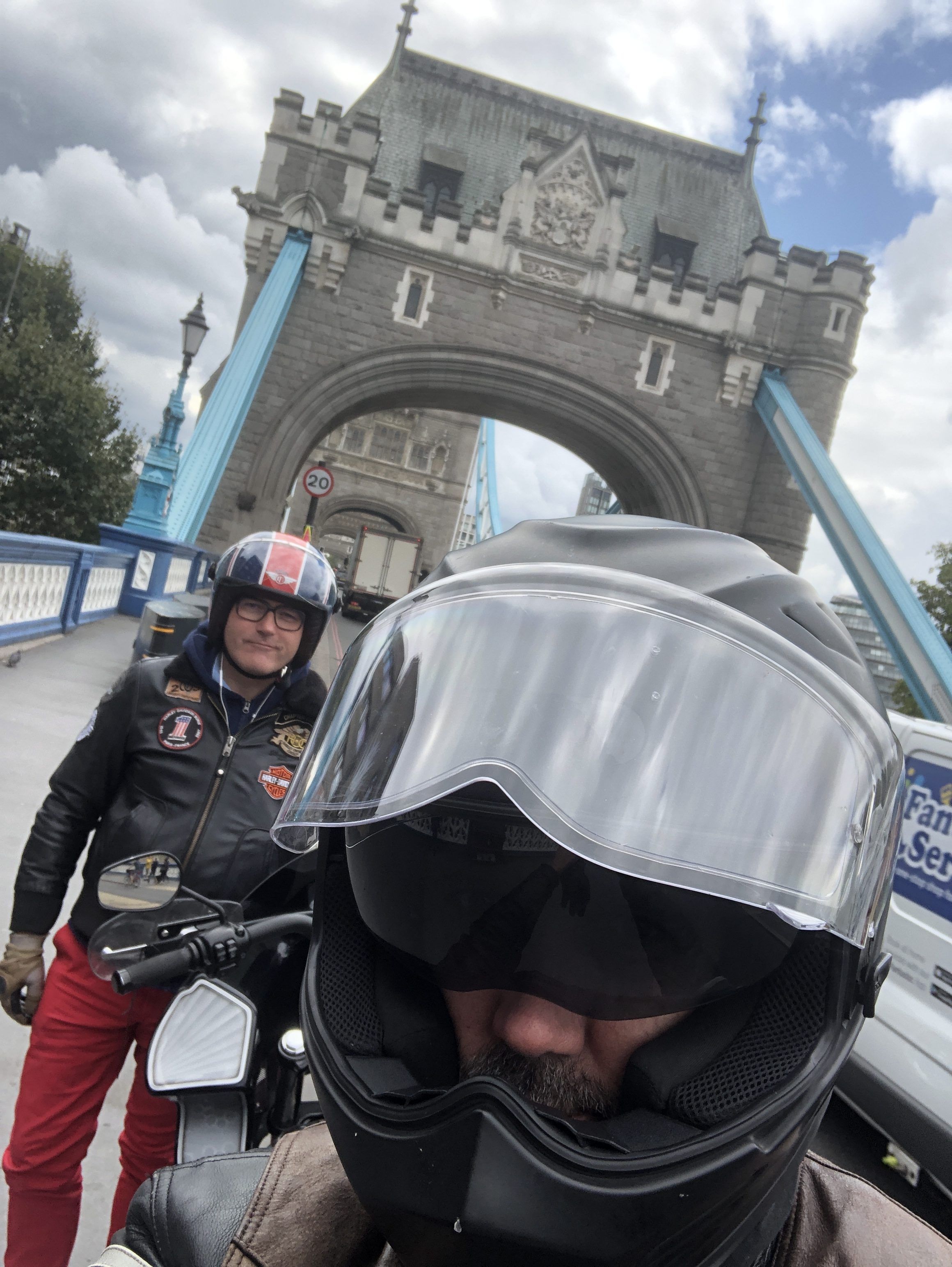 Got lost in the City …

Of course, we took memorable pix. Note that we were not supposed to make a stop here (it’s more or less forbidden), but as I’m French (means, undisciplined and arrogant as everyone knows), I now own this exceptional pic: biker me, in front of the Palace (with the queen Elizabeth looking at me trough her window (of course it’ true!!!!).

But, beyond this (very) pleasant ride in town-center London we were very excited by the idea to visit the famous local Harley Davidson dealership. A must see when you’re an European Harleyist: once in your bikerlife time, pay a visit to the oldest Harley Davidson shop of Europe: WARR’S, since 1924.

WARR’S Harley-Davidson first opened its doors on London’s famous Kings Road in 1924, and today the business is still family owned and continues to operate from the same address as the day it first opened. The Warr’s story began with a cycle shop at 661 Kings Road when Captain Frederick Warr started working for himself in 1924 after having seen active service in World War I and then returning to employment in the army after the war due to the lack of work elsewhere. Within a year of opening the shop he had expanded his operation to include motorcycles. During that time the Motor Company had its European operation based in an office on Newman Street in London, and so Frederick, having seen how reliable the early Harley-Davidsons were during his time in the Royal Artillery, visited the Company’s agent and became an authorized dealer. 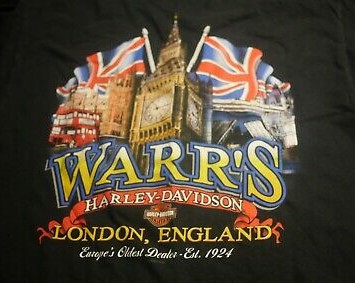 It was 1924. Captain Frederick James Warr had just been demobbed from the Army for the second time. In 1914 the 16 year old volunteer had fooled the recruiting Sergeant about his age and risen through the ranks in the Royal Artillery serving King and Country on the Western front and later on in the Middle East. Now he needed to earn a living and opened a bicycle shop at 611 Kings Road. That same year he moved on to motorbikes, first Triumph and then Harley-Davidson. 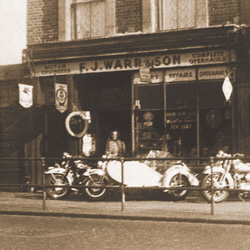 Fred had some experience of the V-Twins on the Western Front during the First World War after the Americans arrived in 1917 and he embraced them with a passion. American motorbikes had had a following in the UK since Edwardian days and HD had a shop in Newman Street, W1. The Twenties was a great decade for motorcycles. The number on British roads trebled in that time as demand for cheap personal transportation grew rapidly. Ex-servicemen were keen to spread their wings. “How you gonna keep ’em down on the farm when they’ve seen Paree?”.

Fred ran the business almost single handedly with his wife Margaret until the outbreak of the Second World War in 1939. As Hitler set his sights on Britain, Fred closed the shop and volunteered for his third spell in the Army, rising to the rank of Major by war’s end. Duty done 611 was open for business again in 1946 and a year later Fred’s son Frederick Howard got involved in the business after leaving the Royal Air Force. Young Fred was every bit the swashbuckling RAF man zooming round the country on an H-D 750cc side-valve WLA. Both wars had made a significant impact on the Harley-Davidson name in the UK. The Rugged WL 750cc motorcycles were supplied to British services through the Lend-Lease scheme. Their well-sprung seats made them extremely comfortable and they were very easy to manoeuvre even on difficult terrain. They were particularly popular in the African theatre because of their oil bath air cleaners and good build quality. The bikes arrived in their thousands in convoys across the Atlantic, although there must be many more thousands under the chilly Atlantic rollers thanks to the constant harassment of the U-boat packs. 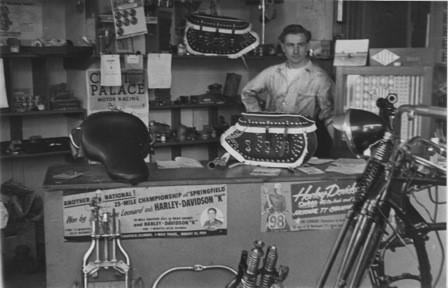 So, around 1949 F.J’s son Fred Warr left the Royal Air Force and went to work for his father. Post war trade was tough though and much of the business concentrated on selling and servicing ex miltary surplus WL750s, also known as ‘Liberators’. At that time trade restrictions meant new Harleys were not allowed to be imported into the UK. Fred Jnr campaigned long and hard against both the US Senate and British Goverment to have the restrictions lifted and he was eventually successful. By 1956 the first new civilian Harleys to be imported direct from Milwaukee into the UK since 1939 arrived at the Kings Rd dealership. From the 1940’s to the early Seventies, Warr’s was the only official representation for Harley-Davidson in the UK. 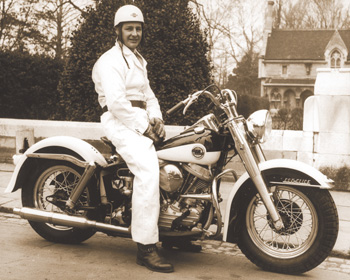 The end of the war saw hoards of bikes staying in Britain. Bikes along with tons of spare parts were auctioned off as Government surplus. Fred bought as much as he could against stiff opposition from other dealers like Claude Rye of Fulham. It was not uncommon to bid for lots without knowing exactly what was in the boxes. Fred once bought a ton of spares, only to discover that half of the container was full of speedometers! Warr’s were in a great position to civilianise the bikes and carved out a reputation as specialists in that area. At the time there was big competition. Claude Rye claimed to have the biggest supply of Harley-Davidson parts in the world. Manchester’s Fred Fearnley claimed the biggest spares dump in Europe. It was a time when you could by an H-D 750 finished in cream for £89! Young Fred was a very accomplished rider. He rode in most kinds of competition, taking part regularly in sprints and road trials. He took an Electraglide to victory in the National Rally of 1974 and his 1957 success in the 1000k Silverstone won him a special commendation from the Milwaukee factory. In the mid-seventies he competed in two Circuits des Pyrenees riding an Electraglide and a café-racer sportster. It was 1957 and Fred jnr had taken the helm and was driving the business forward. It was time to source new Harley-Davidsons. So off he set on the Queen Mary and headed for Milwaukee. After a very rough crossing he checked into a cheap hotel and then met with founders son William Davidson (Willie G’s father) and his export manager. Fred was wined and dined aboard William’s boat on Lake Michigan. Fred was impressed and so was Davidson. Fred was even more impressed when Davidson told him “his hotel bill had been taken care of”! 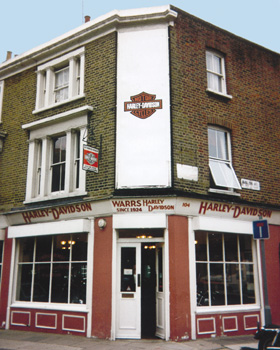 One of the problems facing Warr’s at the time was the protectionism of the British government. There was a complete ban on the importation of US motorcycles to the UK. After much lobbying the illogical situation was resolved (US car imports were allowed but not bikes) with a token allowance of 80 units into Britain. It was not easy to sell such a number. Most of the bikes coming in at that time were K Models and the new Sportsters. At the time Warr’s was pretty much the only official HD dealer in Europe. Warr’s continued to sell, service and maintain Harleys for the next ten years until 1969 when AMF bought Harley-Davidson. AMF opened up an office in London’s Burlington Street in the early seventies and started to appoint new dealers – as many as 20 in the London area at one time. But the dealers found the low quality, highly specialised machines difficult to sell. Warr’s survived this period by doing the job properly, doing repairs and selling spares. They bought the bikes other retailers found unsaleable but made some margins there too. And so it continued through the bad old AMF days until the management buyout of 1981 and the proper rebirth of the V Twin manufacturer. 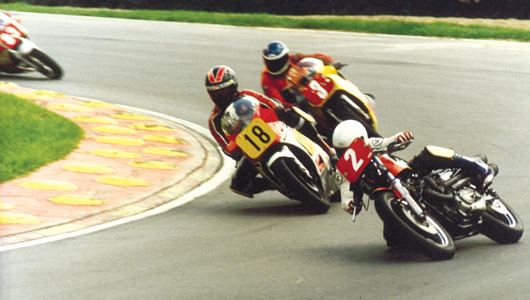 1981 was also the year when the next Warr generation became involved in running the show. Fred’s eldest son John Warr joined as the company moved from the King’s Road premises to Waterford Road round the corner. Two years later in 1983 he went to Wisconsin to take part in a dealer meeting. There he caught his first sight of the new Evo engine designed by Englishman John Favill. Favill had been with Norton Villiers prior to joining H-D. The introduction of the Evo engine with its aluminium modern gaskets and the best of engineering practice, backed by a management who put quality on top of their agenda, led to a surge forward in sales. With reliable bikes they could now go out and expand the market.

Like his dad before him John Warr has Harley oil in his veins and soon got involved in racing bikes. His passion started when he saw American racer Cal Rayborn, the H-D factory rider, come over for an Anglo-American Match Race series in 1972 and use the Warr workshops. Legend records that Rayborn won three of the six races in the series. To young John, Cal was a Harley hero and he could hardly wait to get out there and try to emulate him. 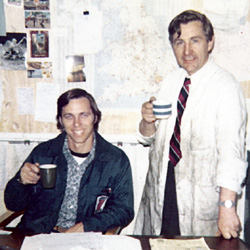 Harley racing legend Cal Rayborn takes tea with Fred Warr. He started production racing at the age of 17. When legendary H-D racing manager Dick O’Brien came up with the XR1000 based on the 750 flat tracker John took to the big brute with a relish and kitted it out for the track.

He rode Harley XR’s and the first Buells with great success throughout the 80s. In 1987 at Croix en Ternois in France Warr’s also recorded the first ever race win with a Buell outside the States. To this day Road Racing is important to the company and as recently as 2006 Grand Prix star Jeremy McWilliams succesfully rode a Warr’s XBRR Buell in the Daytona 200. In 1990 at a ceremony in Washington DC Warr’s were honoured by the Harley-Davidson Motor Company for outstanding loyalty and dedication to the brand since 1924. 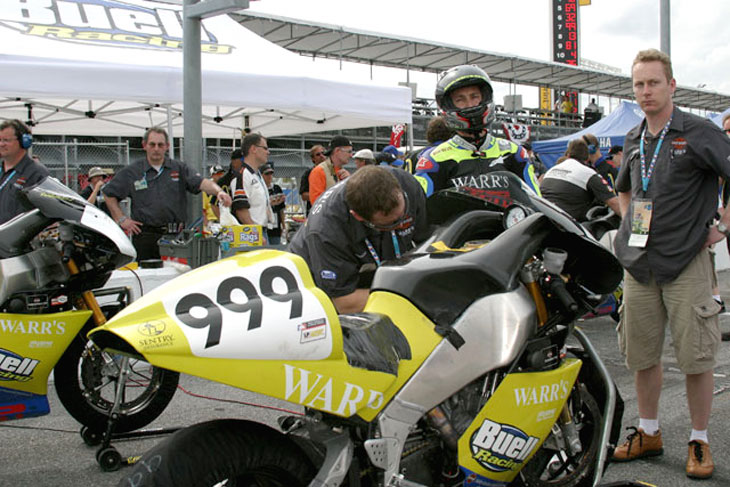 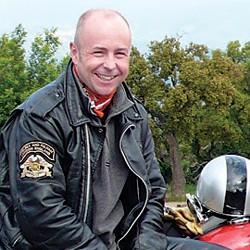 … and his father’s interest concentrated on the vintage machinery.

John is also the founder and director of both Chelsea & Fulham and Meridian Harley Owners Groups and is a regular participant in the annual London to Brighton Pioneer Run riding his 1914 ‘Silent Gray Fellow’ Harley-Davidson.

In 1999 the company moved into a new purpose built 20,000 sq ft dealership designed by architects Kilburn & Nightingale and built on the site of the original 1920’s store. In 2003 a further Harley dealership was opened in Mottingham, South London – just 10 minutes townbound from jct 3 of the M25. 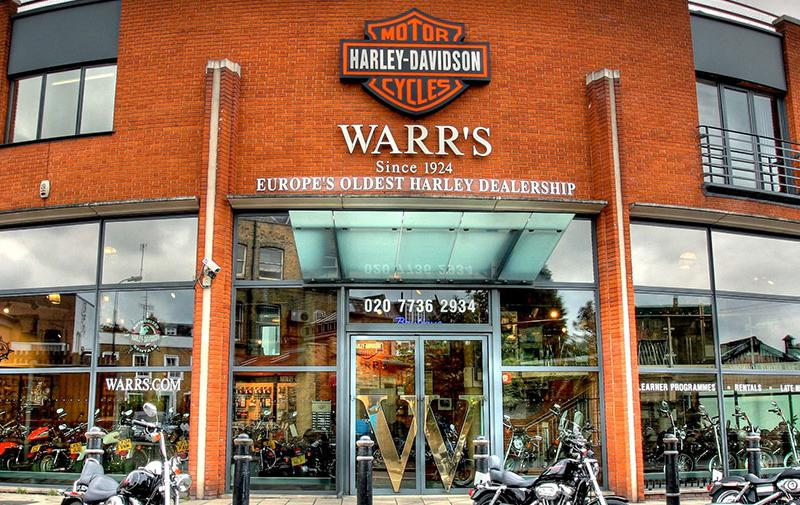 In 2014 at a ceremony in Nashville, Tennessee, Warr’s were honoured by the Harley-Davidson Motor Company for outstanding loyalty and dedication to the brand since 1924. Exactly 90 years of Harley-Davidson sales and service. 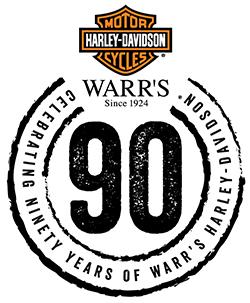 When in the shop, you can admire a set of vintage old HD in a perfect state. 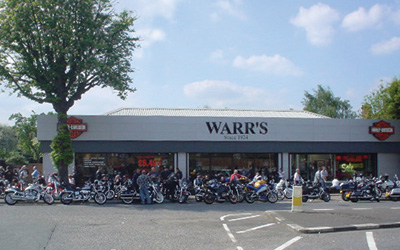 Warr’s has an historical tradition of racing. In UK or abroad. 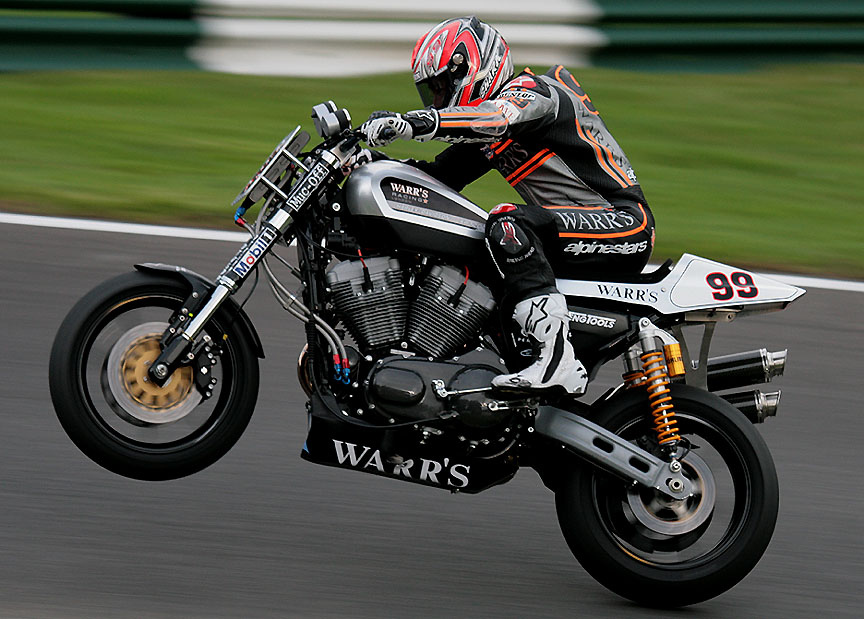 So, next time you will be in Paris my American friend, we’ll have a ride to the French city of Clais (3 hours) to take the ferry boat to UK. Then, after 2 hours of highway we’ll reach our goal: having a nice cup of tea in a legendary place: WAR’S, the Europe’s oldest Harley dealership!!

(NO) RIDE TO VENICE TO MEET THE ANGELS’ PHOTOGRAPH