Before the new Harley-Davidson Street 750 even hit’s American showrooms it hit the dirt in a Flat Track exhibition race at the X Games Austin. (look for highlights during ESPN’s X Games coverage.) This follows their introduction on the ice at the X Games Aspen. Leading the exhibition race was reigning AMA Pro Flat Track Grand National champion Brad “the Bullet” Baker on a Street 750. Fans now have a chance to voice their opinion if they feel that X Games Austin should become a medal sport at future X Games Austin. Use #XGamesFlatTrack to make your voice heard.

“The action-packed environment at X Games Austin fits perfectly with the attitude and identity of the new Street 750 motorcycle,” said Dino Bernacchi, Director U.S. Marketing, Harley-Davidson Motor Company. “And, since we gathered input from more than 3,000 customers, riders and dealers in more than 10 countries around the world to create the Street platform, it seems only fitting to let our fans decide if Flat Track racing should become an X Games medal event.” 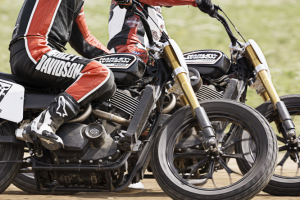