Now this is an article written just after the Harley-Davidson 110th. Marliyn Stemp asked me to stop by an artists studio after working the AMD Show all day in Milwaukee, she didn’t tell me how special of a stop this was, I think she was waiting for the surprise my face… however, this was a visit that took me way back to childhood ans everything I remembered about Harley-Davaidson as a child.

“Paul Smith, Artist
Designs from the heart and soul of a rider”

Most of us can recall the circumstance of our first motorcycle ride, but few of us have the ability to turn that memory into a provocative work of art. Meet Paul Smith, a man whose work you’ll recognize even if you don’t know his name. In fact, if you have a tattoo of the Eagle on the Bar & Shield, you may well be wearing his artwork on your body! 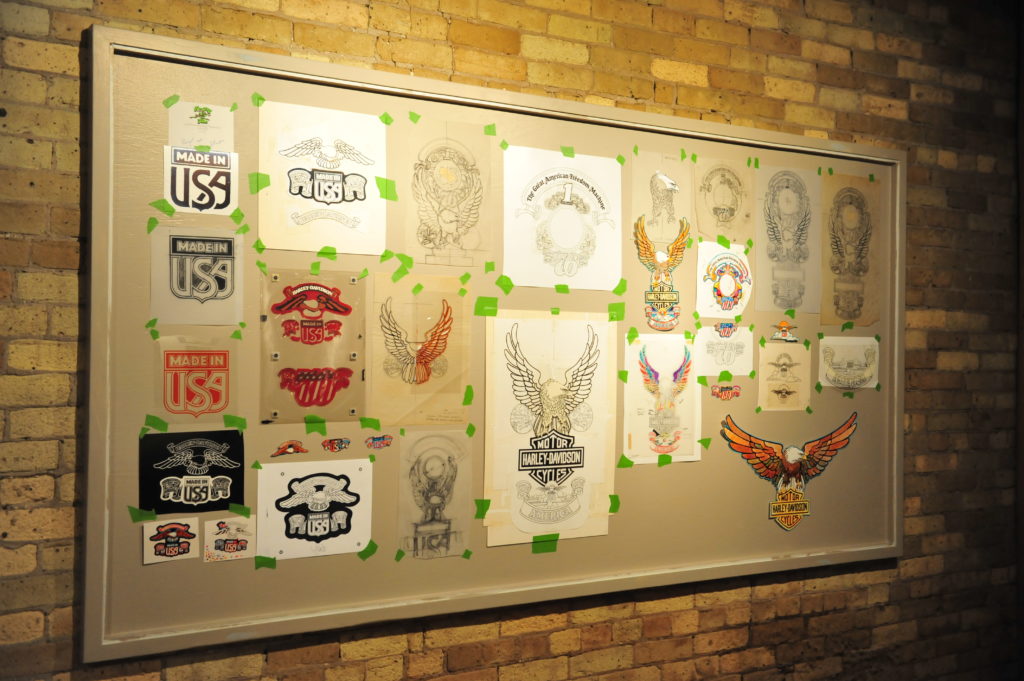 Take a trip with me (if you’ll excuse the expression,) to the 1970s. “Sex, drugs, and rock & roll” wasn’t just a groovy saying or a song title, it was a way of life, a pervasive counter culture mantra that dared participation by the younger generation and frightened the “establishment.” Harley-Davidson was owned by AMF then; it would be several more years before the eagle soared alone. 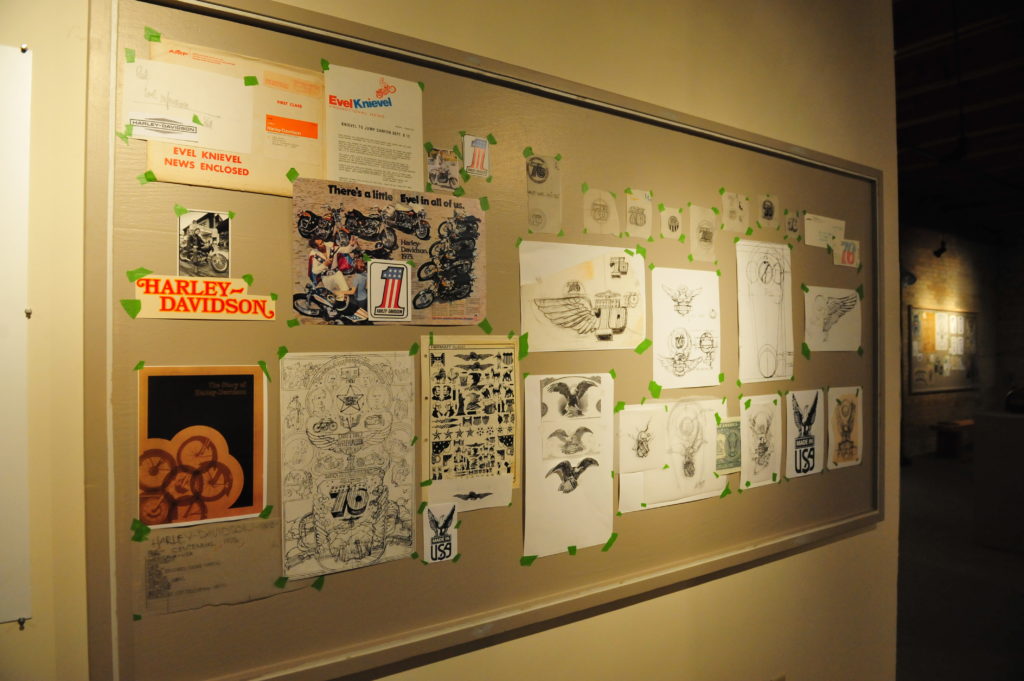 The eagle: that iconic emblem of singular American pride and freedom. Patriotic themes were sweeping the country then, as the 200th anniversary of its founding approached and pop artists turned to eclectic Americana imagery. Well before 1976, stars and stripes adorned Wyatt’s Captain America bike, Evel Knievel’s leathers, and Harley’s Number 1 racing logo alike. Harley-Davidson’s ads in the early ‘70s proclaimed the “Great American Freedom Machines.” All of these were appropriate themes for American bikers on their American motorcycles; they flew with the wind, like the eagle. 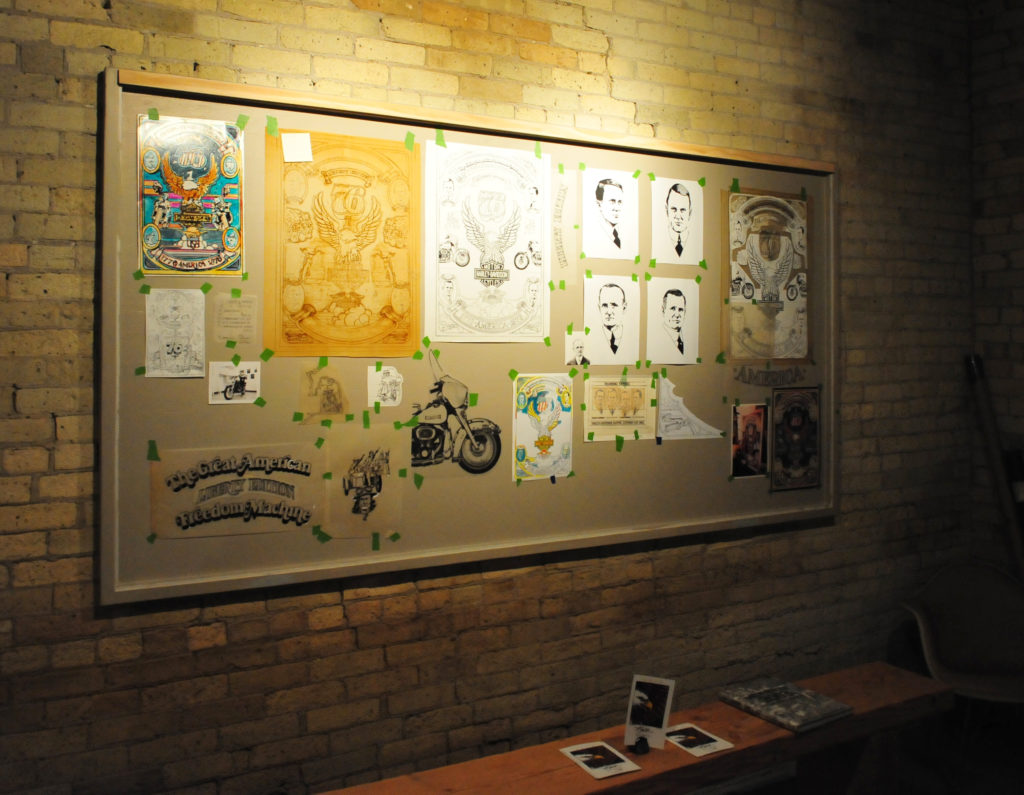 Paul Smith became a student of Industrial Design at Milwaukee’s Layton School of Art in 1959. Recently discharged from the Army, he was thinking of Milwaukee as a waypoint; he planned to attend the Chicago Art Institute on the G.I. Bill. But then: “I discovered the Layton School of Art and I thought, ‘This is it!’” he said. “I always loved illustration and design and I knew I could make a living at it, too.” 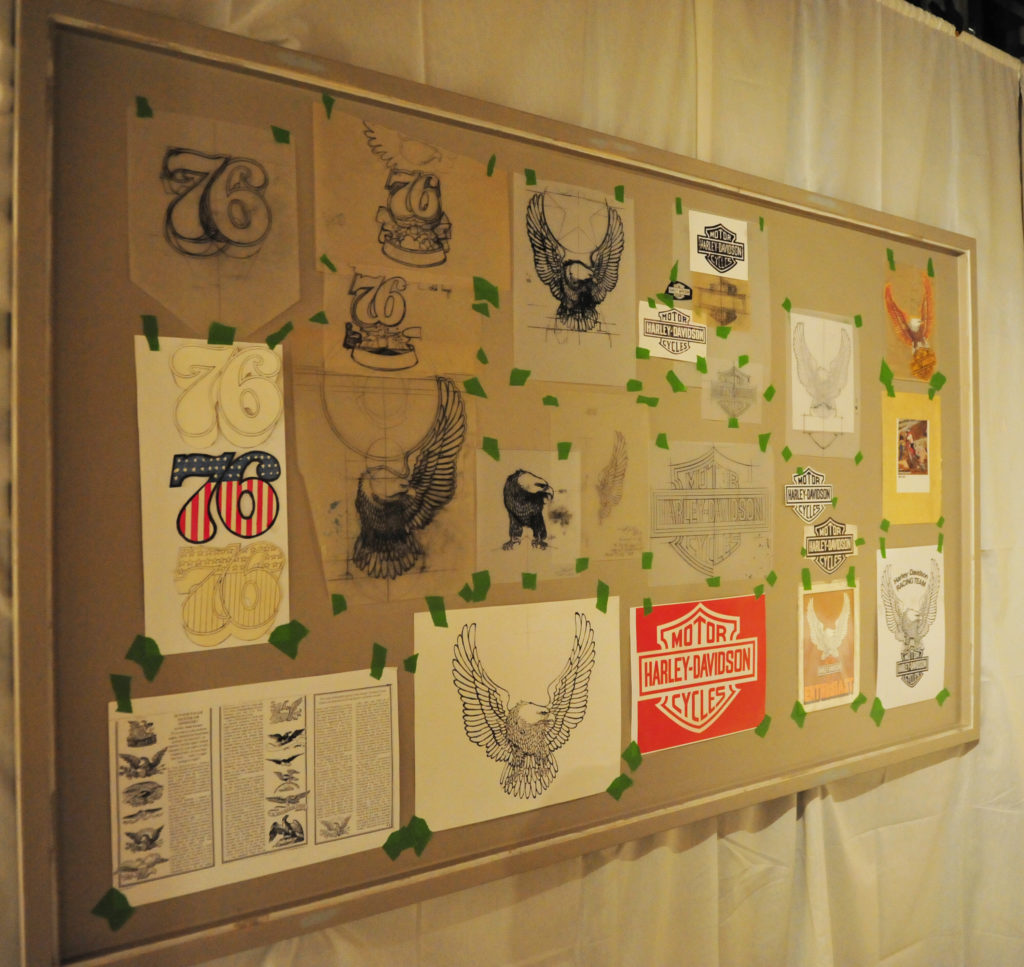 That might seem like a bold pronouncement, especially from this slight, soft-spoken man with the easy smile. But those characteristics mask an ardent art spirit backed by quiet confidence and passion. In fact, there was never any doubt that Paul would pursue a life in the art world; it was a completely natural progression. “In kindergarten Sister Josephine asked the class what we wanted to be and I told her I was going to be an artist,” he said. “I thought everyone knew what they wanted to do. I later realized how lucky I am, to do what I love. Even if nobody paid me to do it, I’d still draw.” 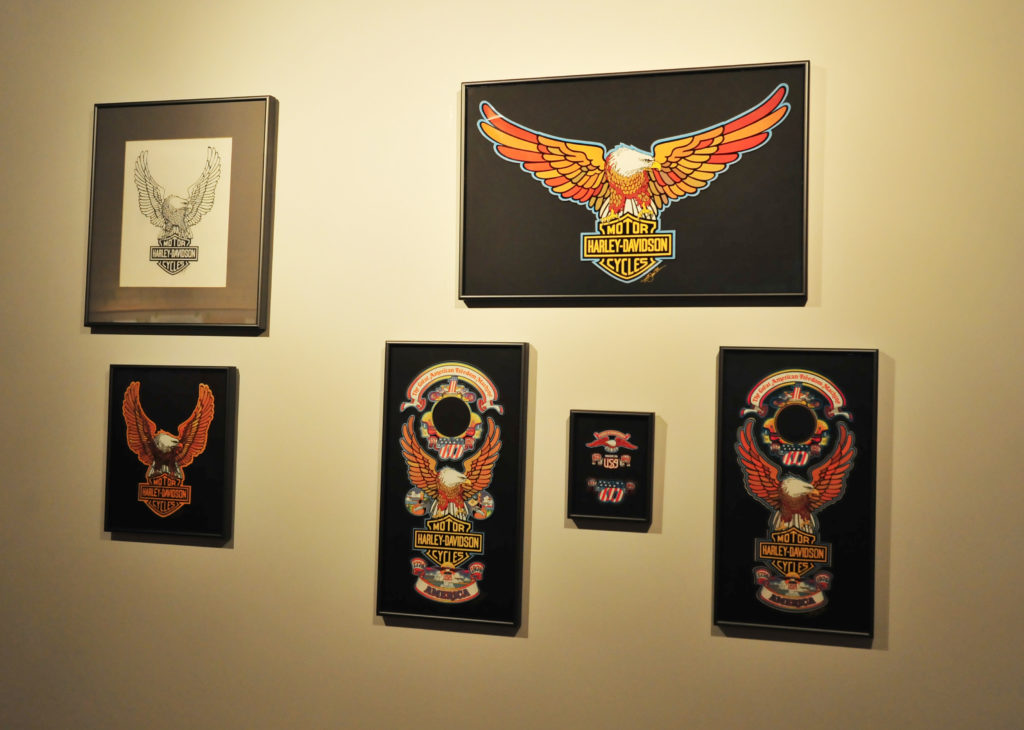 By 1974 Paul was an established freelance illustrator and graphic designer known for riding around Milwaukee on a WLA that he’d rebuilt as a custom bobber. When he was asked by Willie G. (people called him Bill Davidson then) in H-D’s styling department to design decal graphics for their 1976 Liberty Edition models, particular motifs immediately took precedence. As a Harley rider himself, Paul’s thoughts turned to Americana, folk art, U.S. currency imagery, heraldic symbols and, eventually, the bar & shield. After all he had a bar & shield patch on his riding jacket and thought it was a striking symbol, though the company considered it “old” then. And, as the progression of his designs show, (as viewed at his gallery in Milwaukee this summer) he worked through a process typical of graphic artists who sketch, alter, move and re-work various pieces until a symmetry develops that ultimately feels correct. Remember, this was long before Adobe and Photoshop; the high tech tools of the graphic artist then were tissue overlays, Polaroid photography and original sketches! 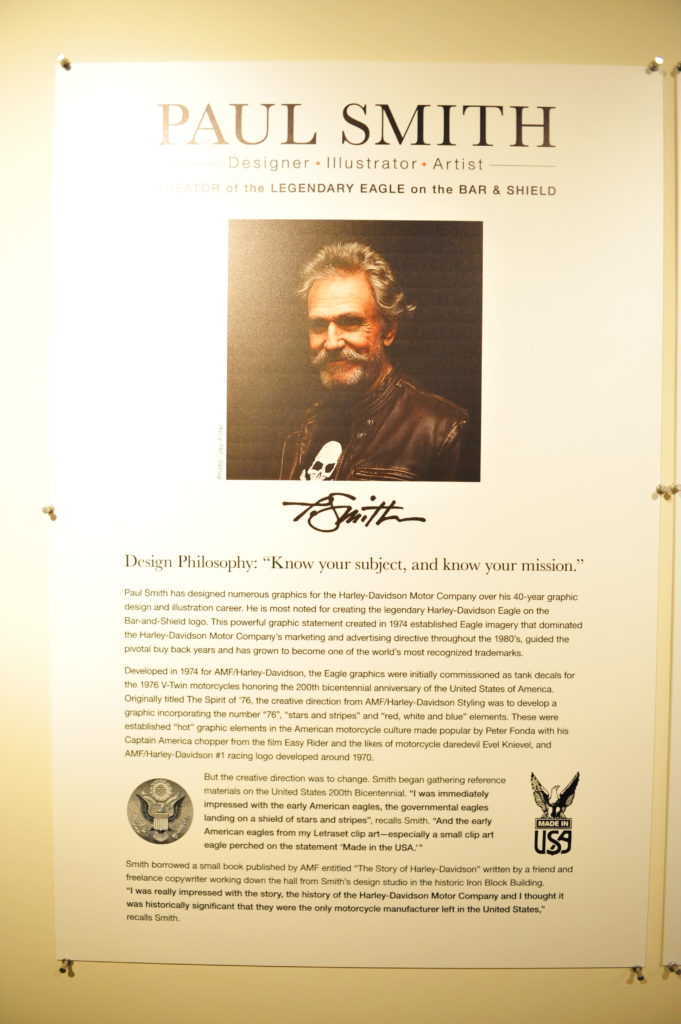 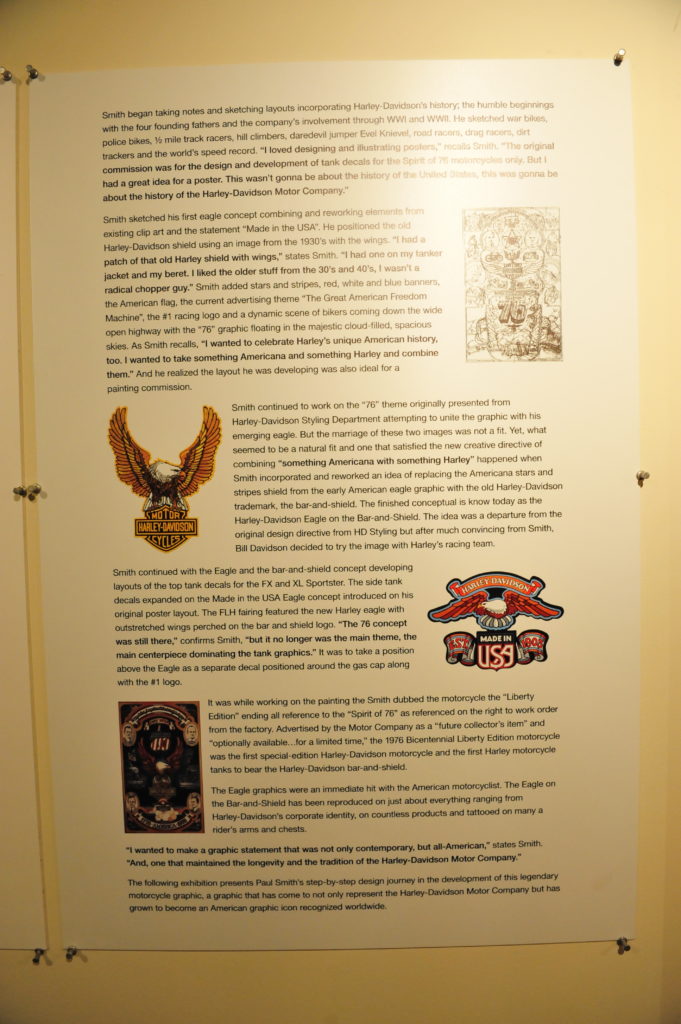 The dominant concept that resulted from this alchemy of image and thought was an eagle on that “old” bar & shield. The industrial designer (and rider) in Paul allowed for the curves of the tank and fairing as he crafted the designs. As a result of this evolutionary process, “I designed a new bar & shield logo which soon became a graphic standard for the Motor Company,” said Paul. It simply made sense that such a well-known symbol should have definitive specs and proportions.

While these ideas were forming, Paul had borrowed a book about the history of Harley-Davidson from a friend. Reading the company’s story inspired him to start work on a new project, one that told the story of H-D’s founders. “They were the only American motorcycle company left and I thought that was significant,” he said. “They had a hell of a history.” The result was an impressive 4×6 foot oil painting that now hangs in the H-D Museum.

As it turned out, Paul’s designs went way further than their use on a specific model’s sheetmetal. But AMF was steering a shaky ship in the late ‘70s, and few people thought the company would survive to see the end of the decade. Paul takes the philosophical high road when it comes to ownership. “I made it for the riders,” he said.

Meeting the artist who created these legendary motorcycling graphics and listening as he traced the development of his concepts was intriguing. As Harley riders, these designs are part of our shared heritage and learning their history can only enhance our appreciation.

Paul has since retired from commercial work but that doesn’t mean he’s stopped drawing. “I’m the art director of my own projects—finally!” he said, and lately he’s been concentrating on fine art projects. “I’ve always loved doing abstract work and that’s my next thing: I call it Divine Collisions.”

That said, Paul claims he’s slowing down but some would dispute that, judging by the volume and variety of his creative output. Continuing the thread of that thought, he added with a grin, “As Dirty Harry said, ‘A man’s gotta know his limitations’… I think I’m starting to catch on.” 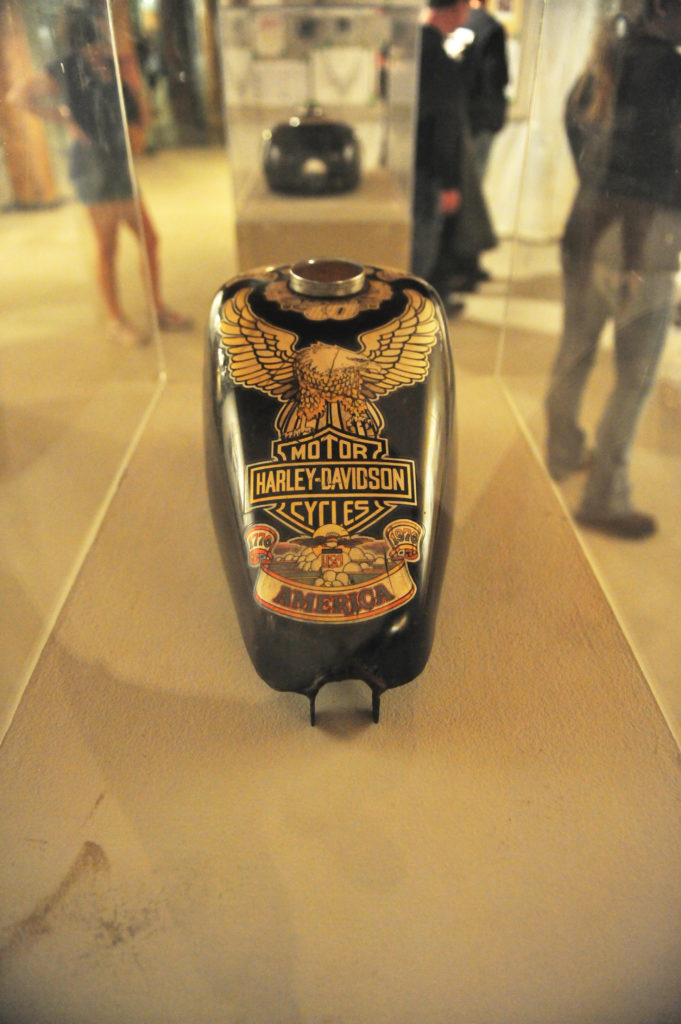 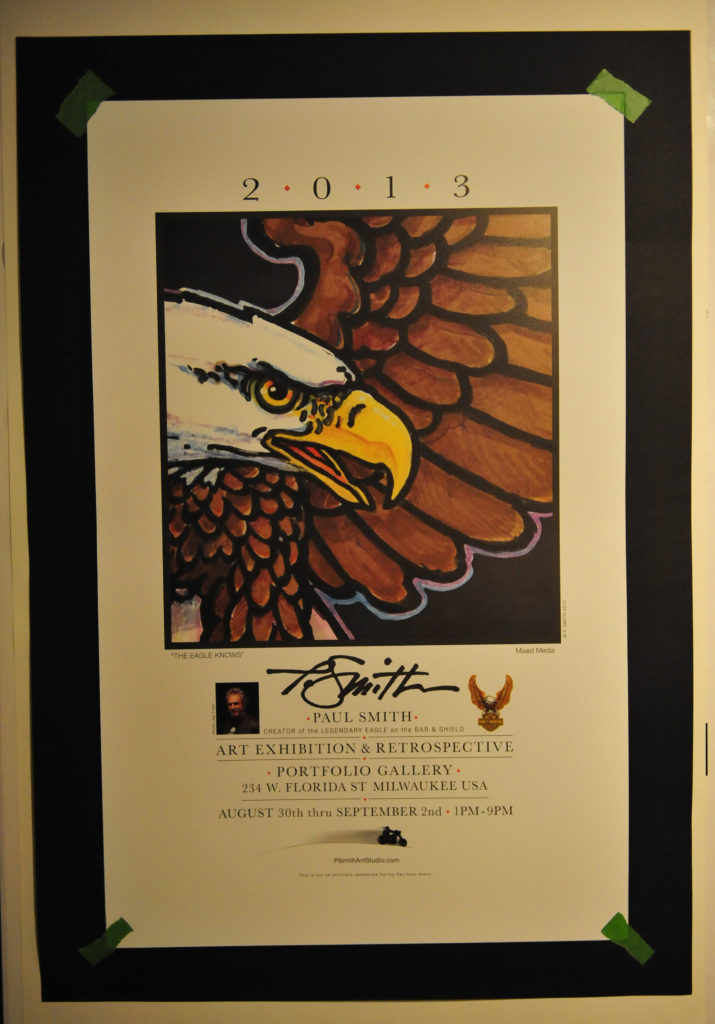 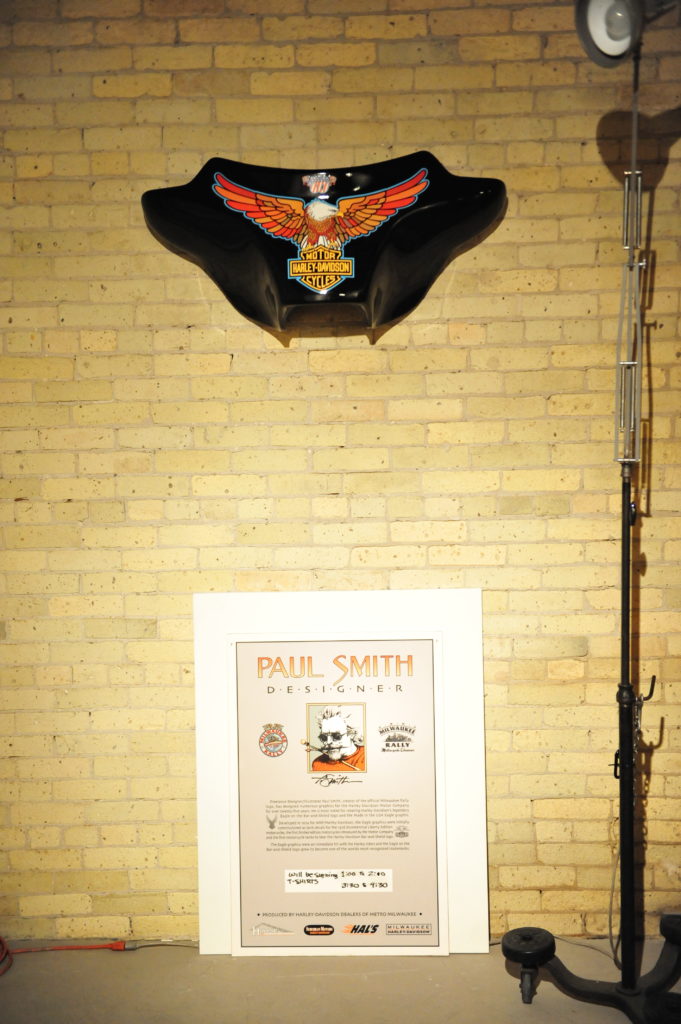 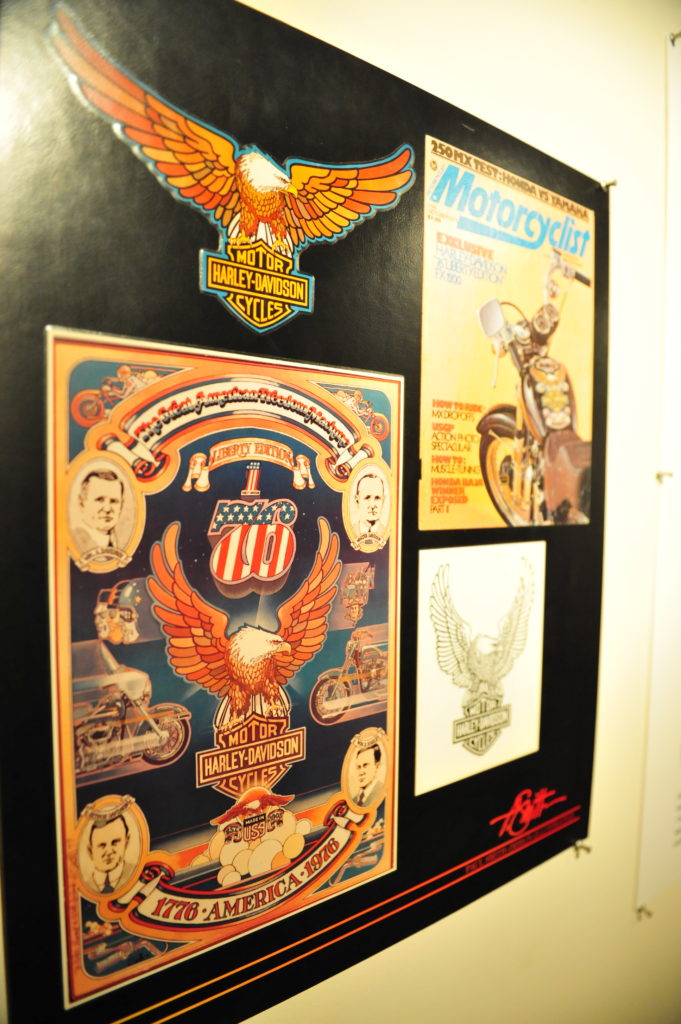