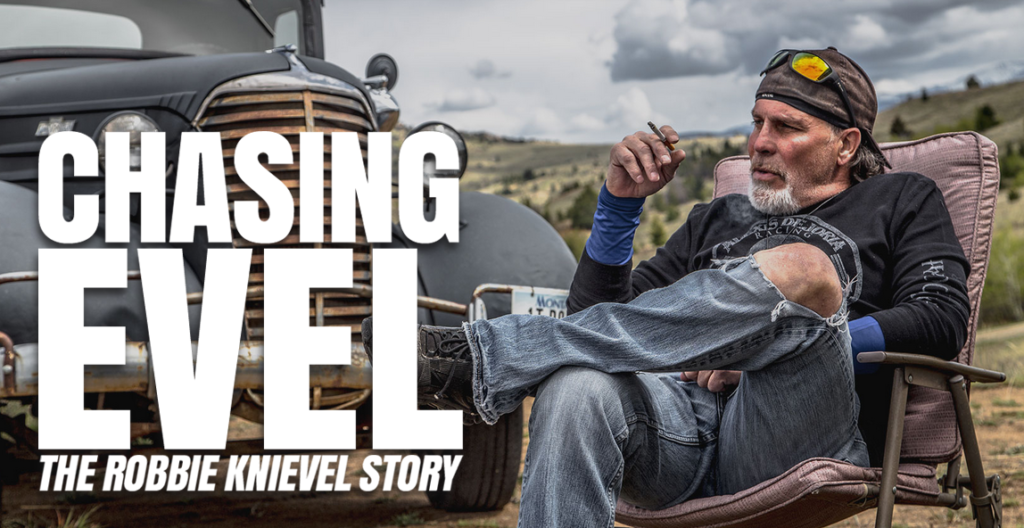 Ever since he was 8 years old all Robbie Knievel wanted was to be like his father. And he did. In record fashion. For over 5 decades Robbie Knievel became the most decorated jumper of all time, jumping over 350 times, breaking over 20 world records and pushing the limits farther than anyone ever had done. “Evel broke bones, Robbie broke records.” You’d think a father would be proud, but there’s only one Knievel.
Chasing Evel explores the life of Robbie Knievel and the epic father and son relationship between two of the most decorated daredevils of all time. The film begins with Robbie today, living in his motor home as he travels like a nomad around the U.S, looking for his next jump. He’s 54, body broken from years of abuse, but Robbie is sober now for the first time since he was 12. He didn’t just follow his father’s daredeviltry, he also followed his legendary partying. However Robbie is cleaning up after yet another brush with the law. But this time it’s for real. His doctor has told him he’s going to die if he continues to drink. The law says he may go to jail . His friends and family say if he turns back to the bottle, they don’t know if they’ll see him alive again. The only way out is to do what he knows best. To jump again.
Official Selection of the Nashville Film Festival, Big Sky Documentary Film Festival and The Northwestfest Film Festival.
A Superchannel Original Documentary
Produced, Written and Directed by Jesse James Miller
Producers:  Ken Johns, Jesse James Miller, Adam Scorgie.
Cinematography:  Ken Johns
Composer:  Schaun Tozer
Original Music by:  Danny B. Harvey, Johannes Grames and Stephen Spender
Executive Producers:  Lathan McKay, Chris Tavlarides, Tim Gamble, Darren Benning, Jimmy Lynn, Rocky Mudiliar
Sales Agent:  Thunderbird Films
Production Companies:  Profile Films, Score G Productions.
Website:  Chasingevel.ca