Let me introduce to your international biker culture an iconic French comic named JOE BAR TEAM.Every French (and almost European) biker, I insist saying every biker, who owned, owns or will own soon a motorcycle (whatever the bike : Bmw, Ducati, Harley, Honda,  …), has already read or will read at least once in his life this comic! 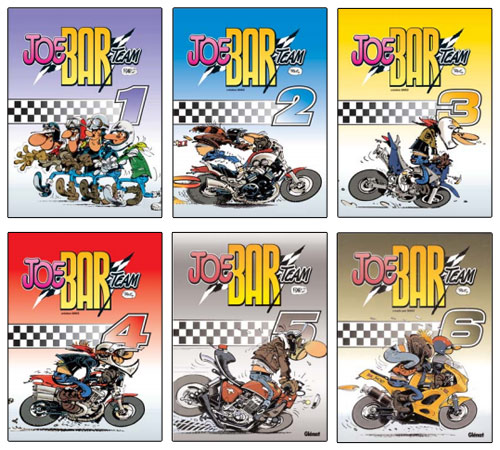 For now more or less 30 years in the French motorcycle culture, this comic is a sort of national monument. 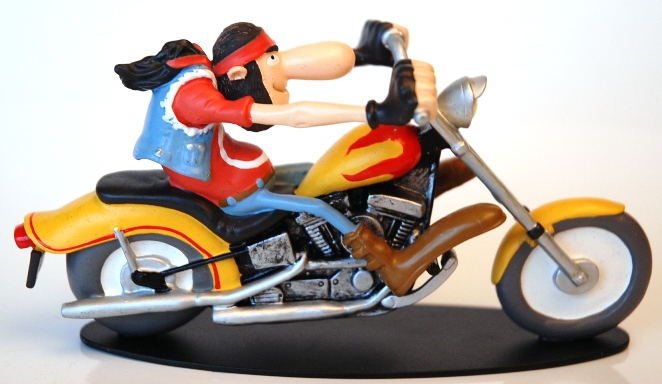 Joe Bar Team is a famed series of biker (“motard” in French) comics whose main characters experience all sort of situations and adventures every-day riders encounter often in real life. 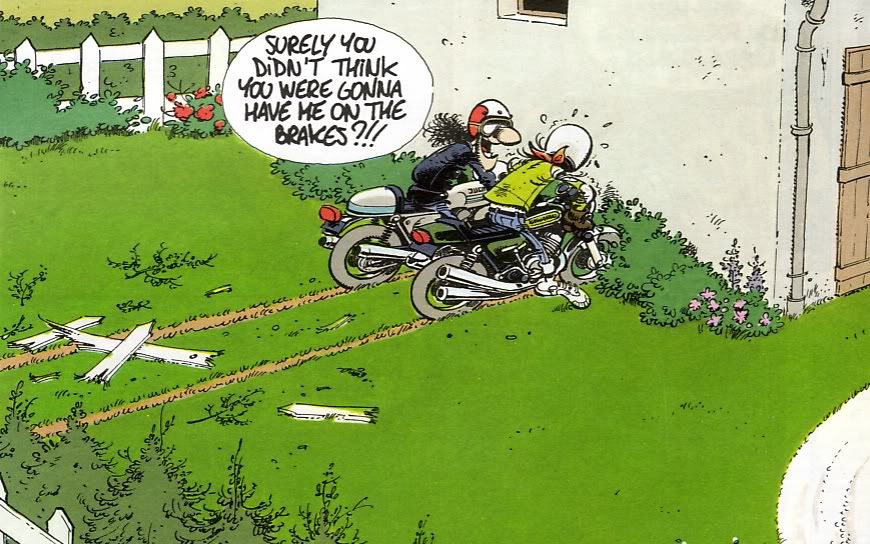 I suppose that we can explain the incredible success of this comic in France (and all over Europe: Belgium, Italy, Germany, Spain, UK,  …) by the fact that as a biker at least once in your life you have known the situations the Joe Bar Team characters encounter. 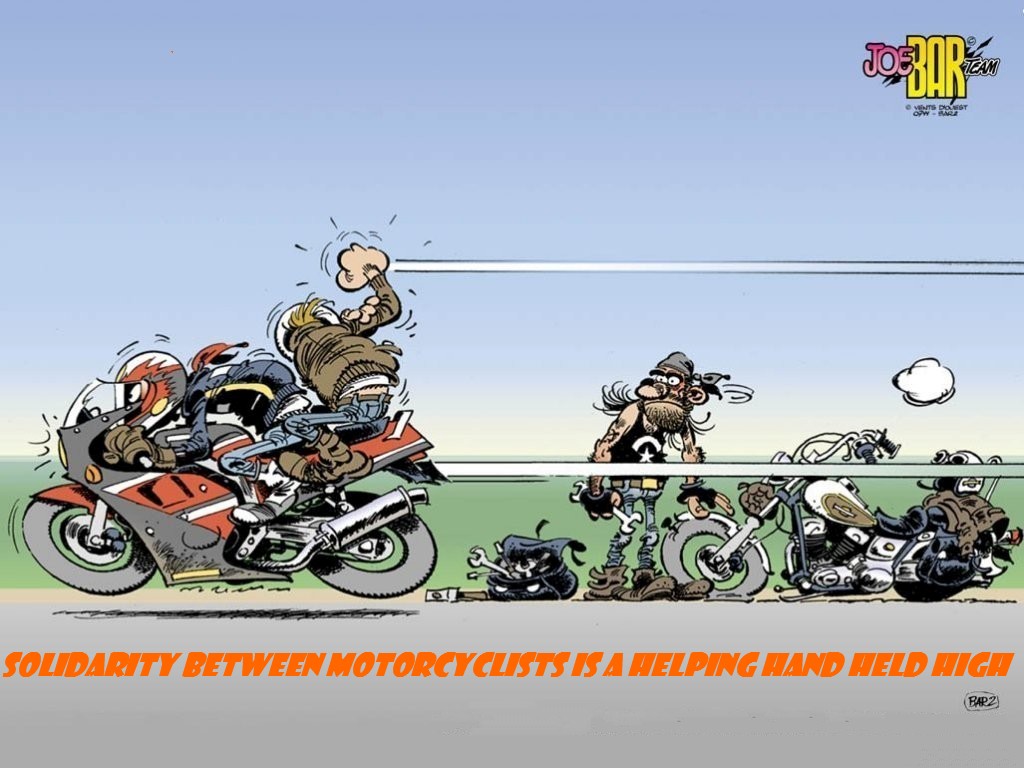 Joe Bar is a pun on barjo, a colloquial word which means nuts, not, as is sometimes thought, jobard which means naive or gullible. You can see the 10 main characters as a sort of “Parisian redneck bikers”. 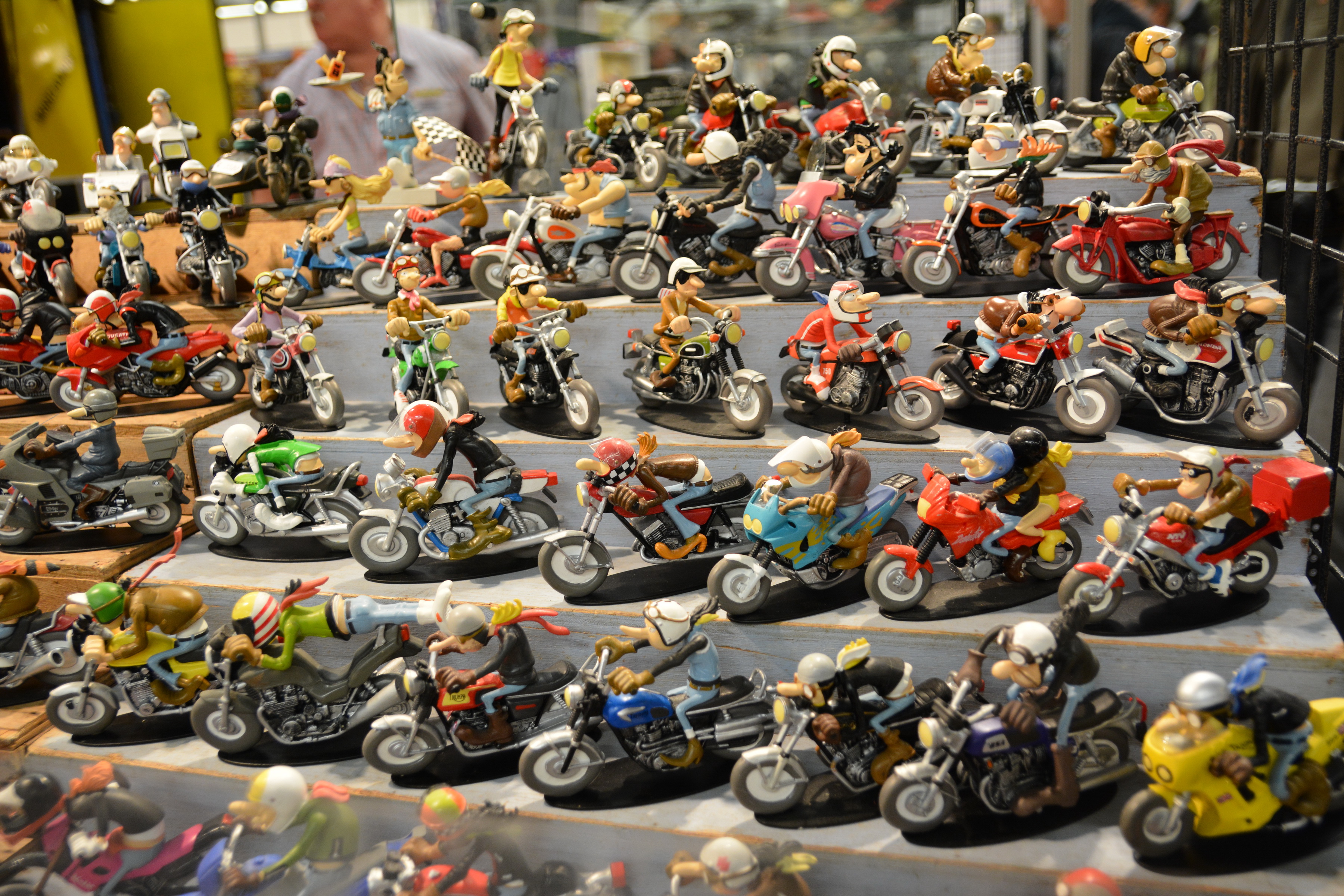 Joe Bar team features the stories of loony bikers trashing their bikes on the road and arguing afterwards at the café over who was the fastest? Been there, done that?! You’ll love it then!!

Their headquarter is the bar of Joe (eat at Joe’s!!). 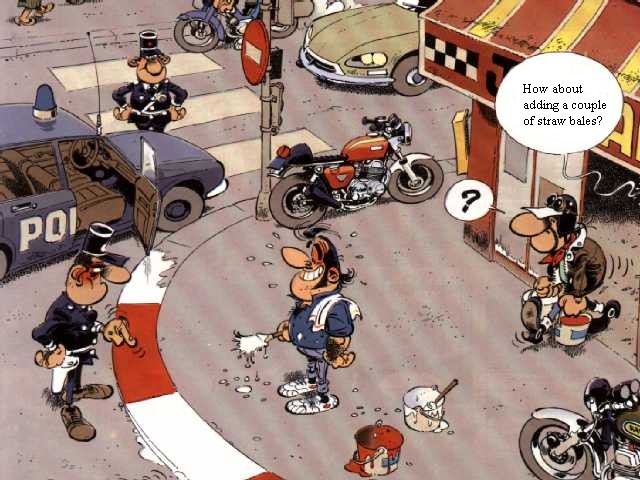 Joe, cafe proprietor. Does not normally ride, but has appeared on a Moto Guzzi at least twice.
Edouard Bracame (Arbre à cames : camshaft), Honda CB750 since second album : Honda CB 1000 Big One.
Guido Brasletti. An Italian looking wording of “guidon bracelet” which was a very typical modification on Italian bikes or with Italian parts. They were small implements that attached directly to the front fork tubes instead of the traditional handlebar and gave a forward crouched more aerodynamic position. Known in UK as ‘clip-ons’. Ducati 750 sport since second album Ducati 900SS.
Jean-Raoul Ducable. Pun on ” J’enroule du cable” (rolling in cable) a slang way of saying accelerating on a bike since you twist the handle to “roll in cable” Kawasaki 750H2 since second album Suzuki GSXR 750.
Jean Manchzeck. Pun on “j’emmanche sec” a slang way of saying I drive very fast. Norton Commando850 since second album Triumph Daytona 900.

Appeared in the second album for the first time:
Paul Posichon (Gallicization of “pole position”), Yamaha XT600.
Pierre Leghnome – (Leghnome : the gnome; bearing in mind the sheer size of the V-Max), Yamaha V-Max.
Raoul Toujours (you could translate by Mr Ride for ever), BMW R90/6. 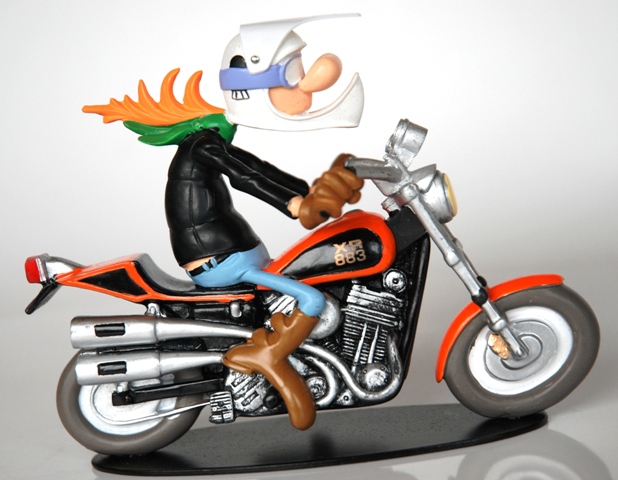 The first volume was initially released in 1990 and has had six more volumes. The rider’s adventures were originally set in 1975 in Paris but their motorcycles were switched for more modern ones in some of the comics. The time setting is not really important, since the situations they encounter are timeless, humorously depicting all aspects of motorcycling spirit. The set of Joe Bar team album 1 is in the mid 70’s with the four main characters riding legendary machines such as Norton 850 Commando, Ducati 900ss, Kawasaki 750H2 and Honda CB750. 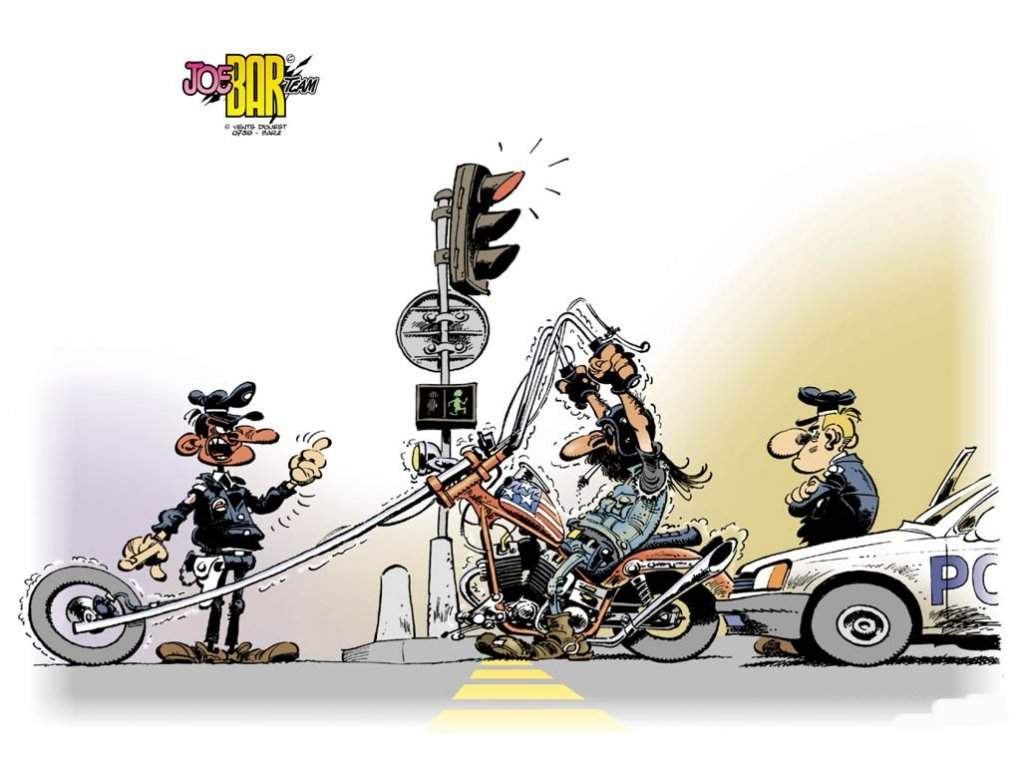 This first album appeals to a universal spirit of biking no matter the time, the bike or the experience as a rider. Think of them as a Fabulous Furry Freak Brothers on café racers. Joe Bar is the name of their hangout place.

The first tome is our heroes in the late 70’s, battling the police, Harley riders, cheap malfunctioning J.C. Whitney electrical doodads, and each other as they scream around Paris. Tome 2-4 have a sketchier drawing style and jumps to the 90’s where the original characters have upgraded their bikes, adopted some new kids to continue the mayhem, and have mellowed out some. 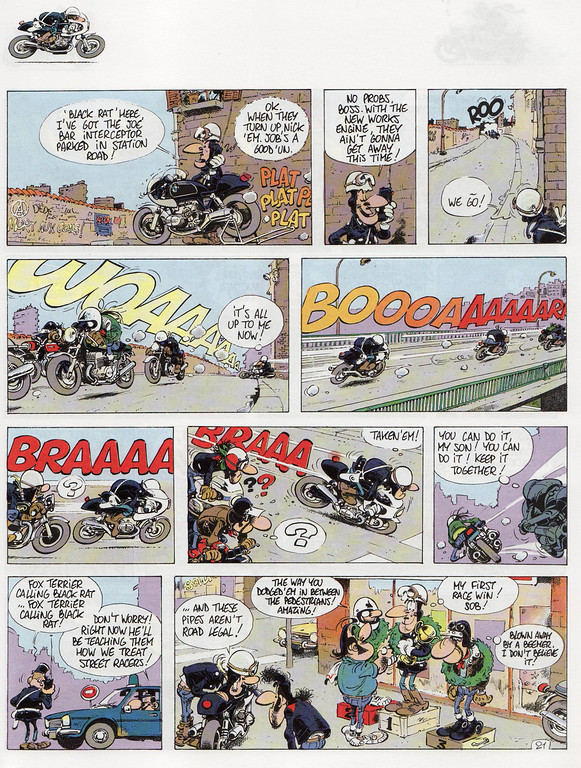 So my friend if you wana have a good funny time seeing how French bikers have integrated the motorcycling culture these 30 las years, you will find on the internet all the JOE BAR TEAM collection. Believe me, reading this comic will help you to forget you “life” on social medias …

Hope you will enjoy the monument of the French motorbike way of life.

See ya soon on the road (who knows?). 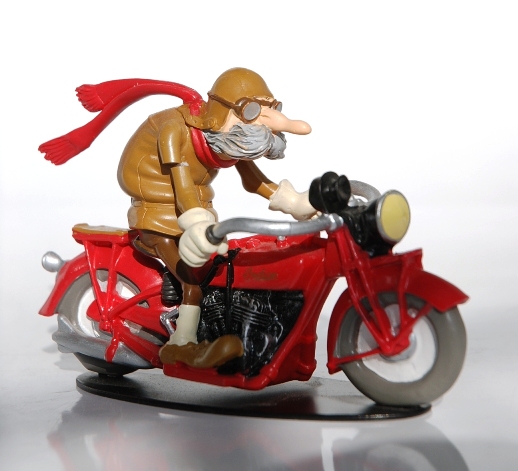 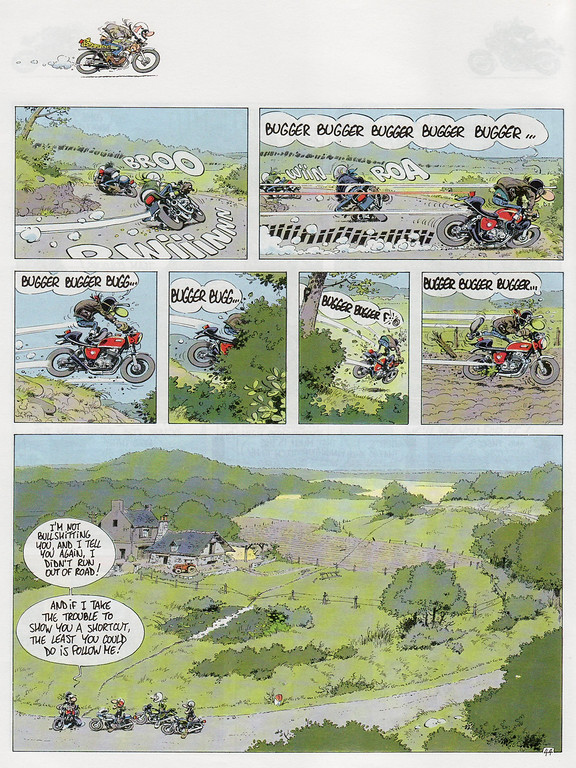 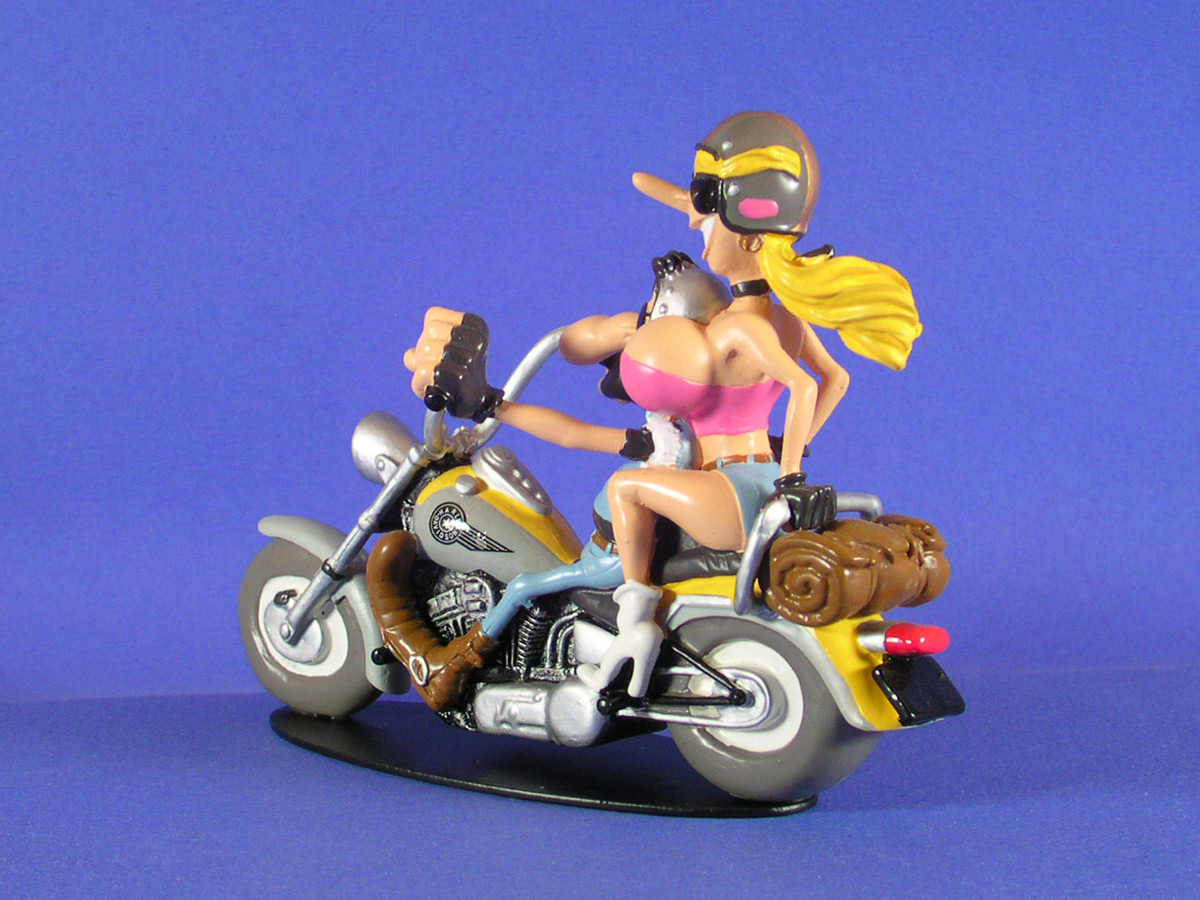 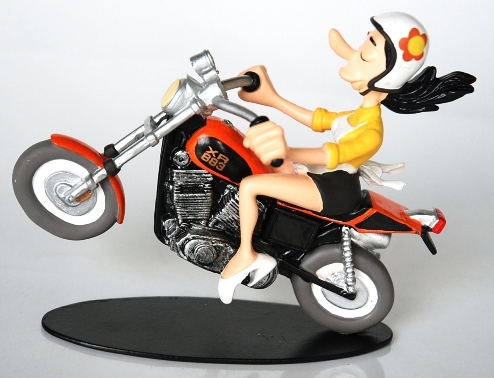 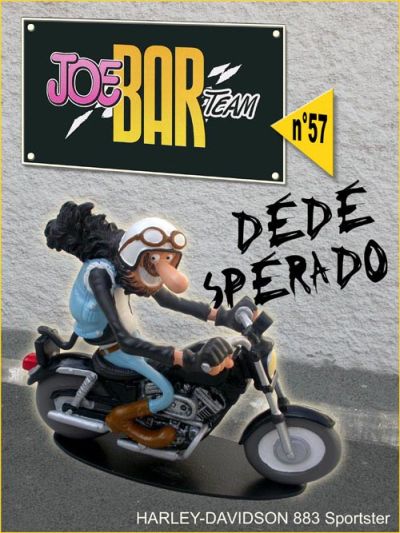 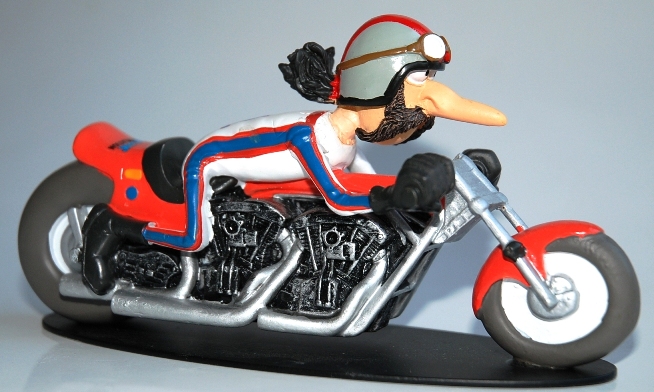 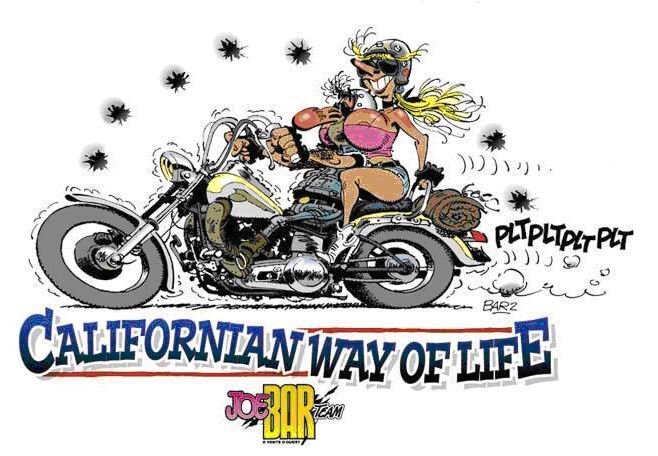 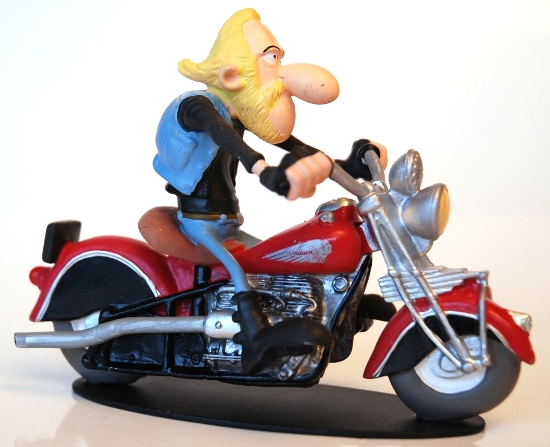 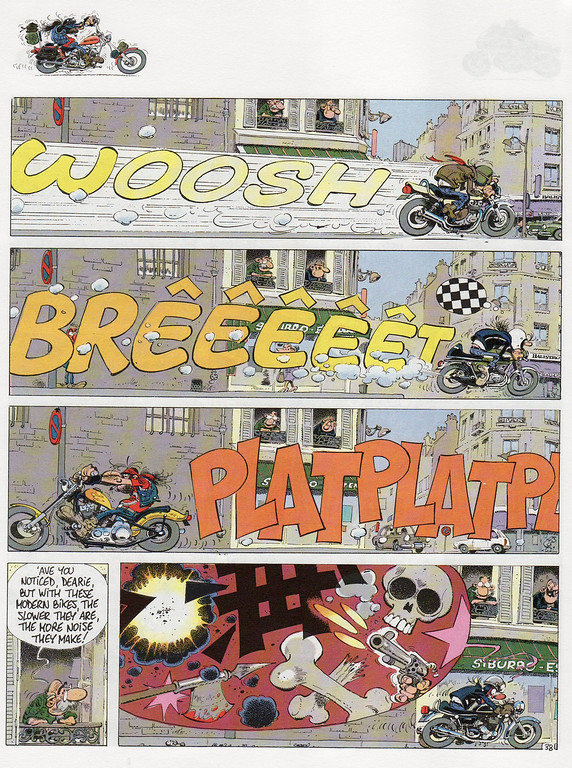 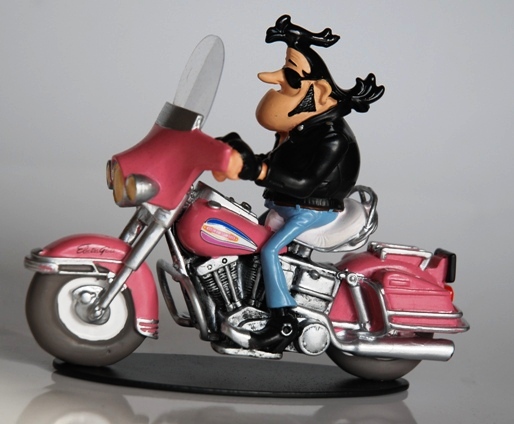 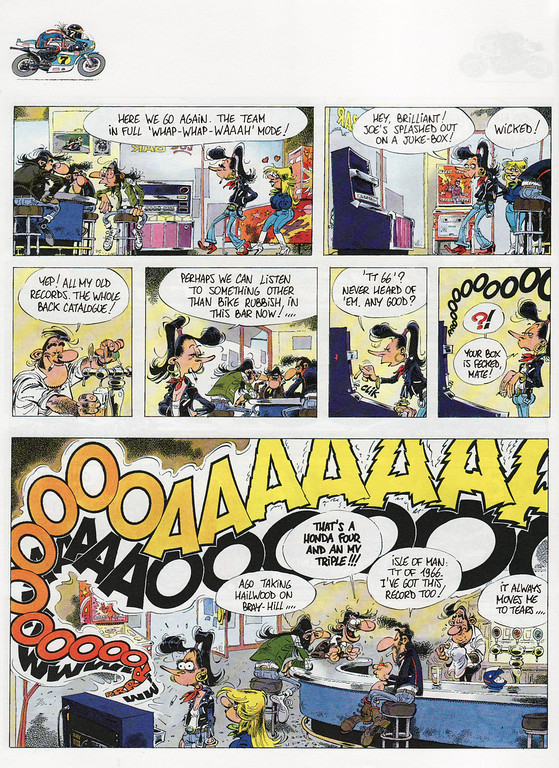 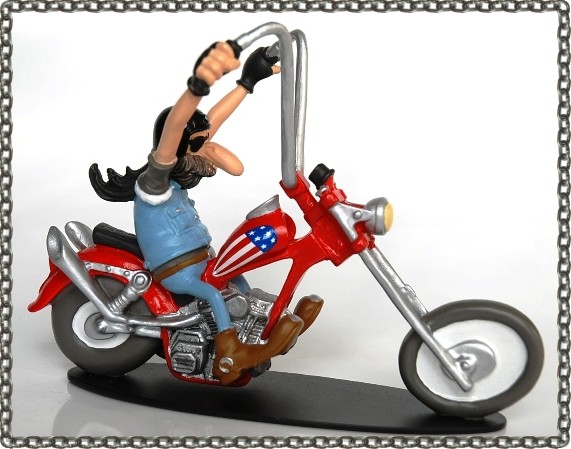 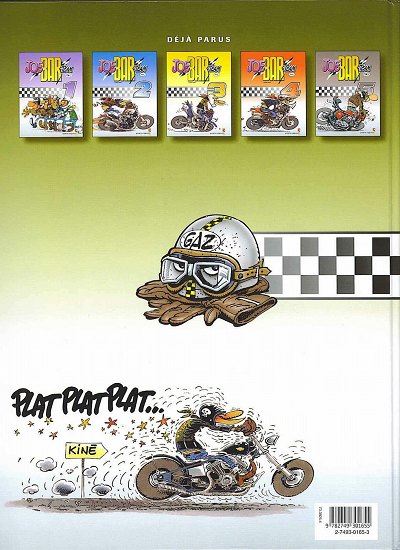 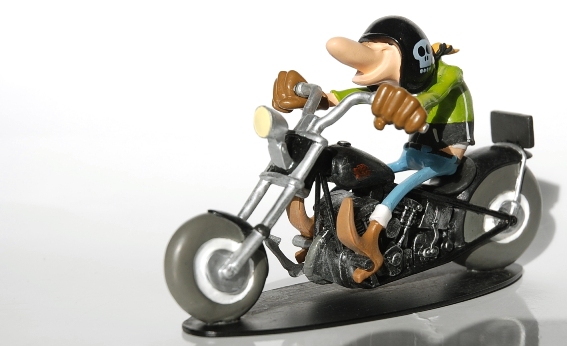