After a COVID-hobbled rally in 2020, Progressive Laconia Motorcycle Week® returns to New Hampshire for its 98th year, June 12 – 20. Ninety-eight years is a long time, longer than most of us have been alive, so you can imagine there are stories to tell about the world’s oldest motorcycle rally. If you’re doing the math, you’ll have to take into account the 7 years the rally wasn’t held to come up with 1916. This was the year a few hundred motorcyclists, organized by central and southern New England motorcycle dealers, traveled north for a “gypsy tour” to Weirs Beach. Who would have known this would mark the beginnings of a tradition that would span a century? The tour was first sanctioned by the Federation of American Motorcyclists in 1917 and when the FAM disbanded in 1919, the Motorcycle and Allied Trades Association (M&ATA) took over the sanction until 1924, when the American Motorcycle Association (AMA) was formed.  Back then, the weekend event centered around races and hill climbs.  The number of participants grew each year as did the event’s duration.  Over time, the rally blossomed into a week-long event, eventually suffering in attendance and popularity after getting wrapped up in the upheavals of the 60’s.  The rally reverted to a 3-day weekend and would remain so until 1991, when organizers revived the week-long event after seeing the success of Sturgis’ 50th Anniversary Rally in 1990.  Laconia Motorcycle Week reclaimed the support of local businesses and the AMA as a week-long rally and the oldest gypsy tour in the country.

Today, Laconia Motorcycle Week® is a much-expanded version of the early “gypsy tour” years, offering attendees lots of fun, food, music and, of course, countless miles of scenic riding through New Hampshire’s famed landscape. Over 230,000 riders are expected to descend on the Lakes Region this year, holding the honor of the oldest of the three national rallies with Daytona and Sturgis being Laconia’s sister rallies.  Sure, all that noise and leather may seem intimidating, but don’t be fooled.  Behind those leather jackets are just regular people; a multi-generational group of enthusiasts, from all walks of life, who all just happen to share in the exhilaration and liberation that riding brings.

So, be a part of Motorcycle Week history.  Plan a ride to New Hampshire for this year’s Motorcycle Week (June 12 – June 20).  Whether it’s your first or 98th visit, you’ll find the shared passion for riding, around which this event was founded, has never changed.

Laconia Motorcycle Week® gives great appreciation to all of our sponsors, especially our Presenting Sponsors: Progressive, AMSOIL and Team Motorcycle, as well as the State of New Hampshire for their large financial support of our rally each year.

For more information about visiting the state of NH, check out visitnh.gov.

Laconia – where rallies were invented! 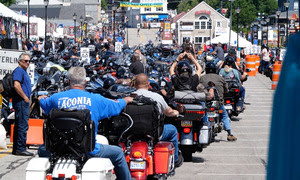