The series kicks off with a double header at the Daytona International Speedway on March 9 and 10 and from there, the series begins an all-new aggressive race schedule giving fans more exciting racing between March and September. In 2023, the series visits 16 different cities (for a total of 18 different points-paying races) which span the entire United States giving more fans a chance to see this exciting format of motorcycle racing live.

AFT is also debuting a new ticketing system makes it easier for fans to purchase tickets directly through the series website. Tickets for the first four events are available now at https://store.americanflattrack.com/tickets.html. While purchasing tickets, fans can grab the latest merch at the AFT Official Online Store: https://store.americanflattrack.com/. FansChoiceTV returns in 2023 as the official live-streaming partner of AFT and in one-hour telecasts on Fox Sports 1.

Put some of these races on your 2023 calendar. We have! 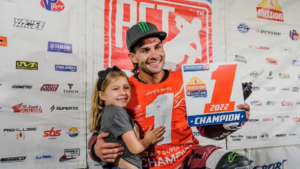