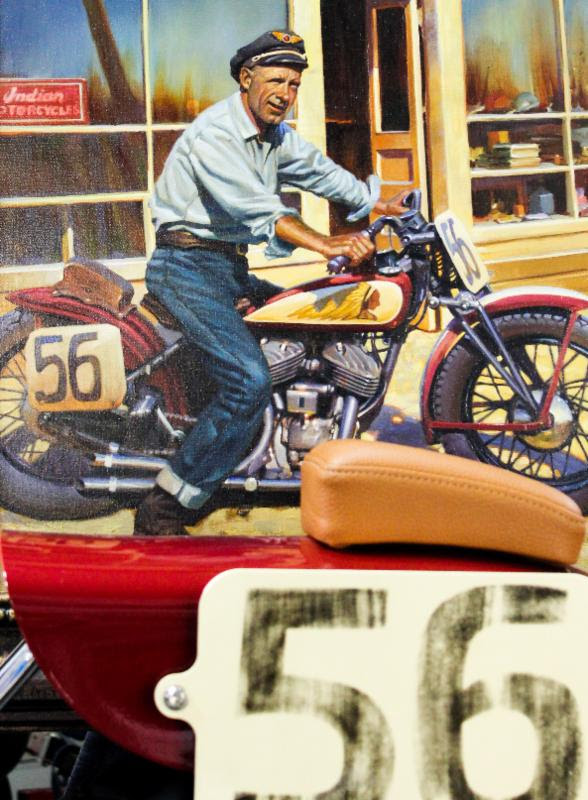 Indian Motorcycle®, America’s first motorcycle company, is proud to present the “Spirit of Sturgis”, a custom Indian® Scout® built by Klock Werks Kustom Cycles of Mitchell, S.D., as a modern day interpretation of the Indian Scout owned by J.C. “Pappy” Hoel, founder of the Sturgis Motorcycle Rally.
Klock Werks based the “Spirit of Sturgis” motorcycle on an original painting, titled “Pappy”, created by renowned artist David Uhl using a well-known photograph of Hoel and his #56 Scout in front of Hoel’s Indian dealership in Sturgis, S.D. Hoel opened the retail location and formed the Jackpine Gypsies in 1936. Two years later, the Jackpine Gypsies held the first rally known as the Black Hills Classic that has now become the largest and most iconic motorcycle rally in the world.
The “Spirit of Sturgis” Scout is owned by Mark Marshall, a friend of Indian Motorcycle Sturgis proprietor Bruce Eide, who proudly owns the “Pappy” painting. The bike has not yet been shown in public, and will be introduced Feb. 5 at the Progressive® International Motorcycle Shows® tour stop in Minneapolis and will go on to be displayed together with the “Pappy” painting at Indian Motorcycle Sturgis.
“I have painted hundreds of pieces from this era and I believe the ‘Pappy’ work epitomizes the aesthetic of the era,” artist David Uhl said about his rendering used as a basis for the bike build. “This piece has an inherent understated narrative that speaks volumes about our unique American heritage. The entire background – his bike, the dealership, the rack on the wall – sums up the true spirit of Sturgis.”