Kiwi Mike and Greg go round the world

It’s billed as the ultimate riding adventure—two men riding Round The World (RTW). In 2012, Kiwi Mike Tomas and Greg Johnson rode from California to the east coast on vintage Indians, and it was such a great adventure they’ve decided to continue it.

“This thing was born when we did the Ride to the Wall with the Coast Guard bike in 2012,” said Mike. That was the year Kiwi built one of five armed services tribute bikes that convened at Rolling Thunder’s 25th anniversary in Washington D.C. Mike was the only builder of the five who rode his bike to the event from his home in Riverside, CA, to the east coast. His buddy Greg decided to ride along then on his 1936 Indian to handle trip logistics. “We had so much fun that we had this brain fart to keep it going,” said Kiwi. “That’s where our RTW adventure came from.”

Their RTW trip is configured as a perpetual event—there’s a beginning but no end. They’ll take four to six weeks at a time riding in locations all over the globe. Both men have met with challenges in their own lives and their goal is to inspire people to live life to the fullest.

After a trial run into Mexico this November, they’ll kick off the RTW event in January of 2015 in New Zealand, Mike’s native country. “I know the people and the lay of the land,” he said. The gas is just like in America and the water is clean.” Mike built two Indian Chiefs for the journey from the frame up. “The frames were stripped and straightened, every single nut, washer, and bushing, has been replaced,” he said. They were intentionally built identically so their parts are interchangeable.

The ballistic saddlebags are made by Al Jesse from Phoenix, who makes these bags for other intrepid world adventurers. Greg and Mike learned about them through Horizons Unlimited, a group for people that want to, are, or have ridden around the world. They’ve met riders from the group and have gone to meetings to gather input and advice.

After New Zealand, the plan is to head to South America. “We want to do it properly, be immersed in the culture, eat the food, meet the people,” said Mike. Added Greg, “That’s our vision; to challenge ourselves in a new country, get to know the people, learn the history, ride the most dangerous roads. We have a magnificent synergy when we travel.”

And a good partnership is vital; Mike is the mechanical guy and Greg handles logistics. Explained Mike, “I shoot from the hip and he says: we gotta figure out how to do this!”

Mike said he is motivated by something a friend told him. “It was 1989 when I started my business full time. I’d look at my buddy Rocky who had a parts business and he’d close up for two weeks and go to Daytona. I’d think, how can you do that and stay in business?” said Mike. “Rocky told me, ‘I got in the motorcycle business to ride motorcycles.’ And that always stuck with me!”

Both admit that in the end, it’s about the adventure, that’s really what’s behind this. “People have to have a game in life and the game is to get up in the morning and do something,” said Mike. “You gotta dream about something. How many people retire and kick the bucket? That’s because they don’t have a game anymore.”

So Mike and Greg have put a game in place for themselves and it’s only going to end when they decide to end it. “That’s the point,” said Greg. “We’re not gonna quit until we can’t do it anymore.” 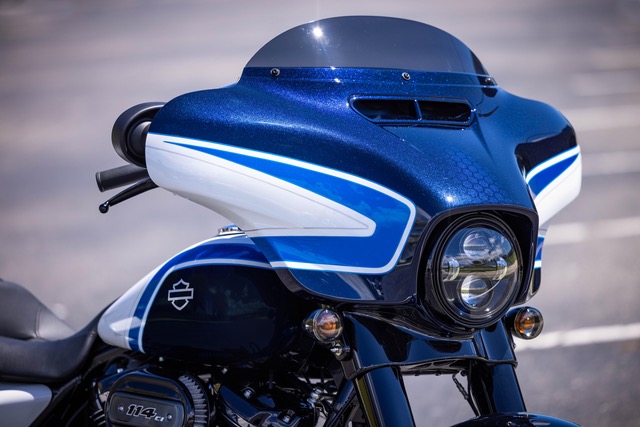