Mecum Auctions will present the E.J. Cole Collection at auction this March 20-21, 2015 at South Point Casino and Exhibit Hall in Las Vegas. Representing 50 years of collecting what any motorcycle enthusiast would consider American Treasure, the collection today stands at more than 220 strong and is considered by many to be the finest, most diverse single collection of American-made machines.

“It is the largest single grouping of American-built motorcycles ever offered to the public from one person’s collection,” commented Ron Christenson, president of Mecum’s Motorcycle division. “We are confident that the entire collection could fetch as much as $15-20 million at auction. It’s an amazing group of motorcycles and its proportion is truly epic. It’s already being dubbed ‘The Antique Motorcycle Auction of the Century.’”

There are several bikes that will headline the offering including many that were previously owned by Steve McQueen as well as two of Cole’s personal favorites, his 1907 Harley-Davidson Strap Tank (Lot S62) 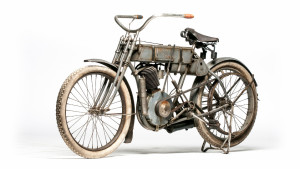 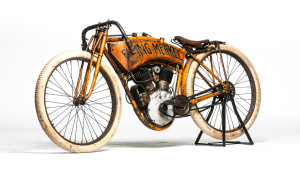 , both in original and unrestored condition. Other headliners, to name just a few, include Cole’s 1915 Cyclone Board Track Racer 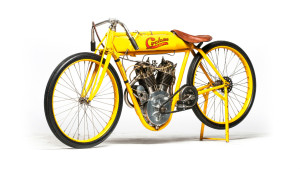 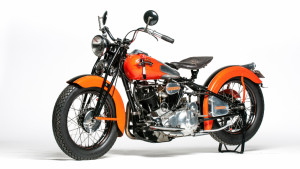 A number of Cole’s motorcycles have been proudly displayed at museums in South Dakota and Iowa. These motorcycles will be gathered up and presented for auction in Las Vegas, but Cole is hopeful the new owners will lend, as he has often done, their newly acquired antique motorcycle to one of the fine motorcycle museums around the United States.

Cole recognizes the unique variety in his collection saying, “I didn’t really have a preference [among makes]. As long as it was a motorcycle and American-made and I didn’t have one, I went after it. I just mainly tried to buy one of everything there was, and that’s about it. I just went for everything.” He also acknowledges his reluctance to let go of what he’s spent more than 50 years putting together. “If my age hadn’t gotten ahead of me, why I’d still be out trying to add to it, but being that I’m 89, I feel like it’s time to quit.” He adds that, “Here at my place nobody gets to see them and they need to be out where people can enjoy them.”

The entire E.J. Cole Collection consists of 239 lots, 231 of those being offered at no reserve. With production years ranging from 1903 to 1991, the collection will be offered at a stand-alone auction this March 20-21. Some of the bikes have never before been seen by the public, let alone offered up for sale, making this offering one of the most unique of its kind.

For more information on the E.J. Cole Collection or to register as a bidder, visit Mecum.com or call (262) 275-5050. Mecum.com is updated daily with the latest consignments including detailed descriptions and photographs of the motorcycles and more to be offered at upcoming auctions.