It’s the Largest Evel Knievel Collection in the World!

Unveiled during Moto GP at Circuit of the Americas in Austin, April 10-12
Witness the Evel-ution of the world’s most notorious daredevil

Austin, TX— It’s the largest Evel Knievel collection ever assembled, a collection of such massive proportions it’s more complete than the daredevil himself ever amassed in one place!

Get a first-hand look at the most comprehensive and authentic collection of Evel Knievel memorabilia in the world, on display for the first time in its entirety at Moto GP in Austin, TX, April 10-12. It includes five of Knievel’s original jump bikes, never-before-seen images, X-rays of Evel’s broken bones, plus his own performance leathers and most iconic personal helmets.

Said Lathan McKay, owner of the collection, “After years of Evel’s possessions being lost in obscurity and so many things sold, stolen or missing, Evel’s effects are finally coming back together.” McKay terms his hunt and discovery process “Evel Archaeology.”

McKay spent the last two years sourcing items and restoring them. The collection’s debut at COTA follows closely on the release of two films about Knievel: Johnny Knoxville’s “Being Evel” premiered at the Sundance Film Festival in January, and a Spike TV documentary titled “I Am Evel Knievel” aired last fall. McKay consulted and co-produced on both projects and their robust reception is proof that the American pop culture psyche retains a fascination with the world’s ultimate risk-taker. Evel Knievel is indeed an emblem of Americana still recognized worldwide.

After the debut at COTA, the collection will travel in Knievel’s Mack truck rig “Big Red,” now completely restored to its former glory. Plans are also underway to establish a permanent home for the items.

Knievel made headlines from the mid ‘60s to the early ’80s for his daring motorcycle jumping and risk-taking attitude. A man of unabashed confidence and brashness, he derived as much fame from the jumps he failed to make—and the injuries he suffered—as the many he completed.

Don’t miss this chance to see the only collection of its kind, bringing together in one place a trove of authentic artifacts that belonged to the most notorious daredevil of the 20th Century. It’s an Evel Knievel experience like never before! 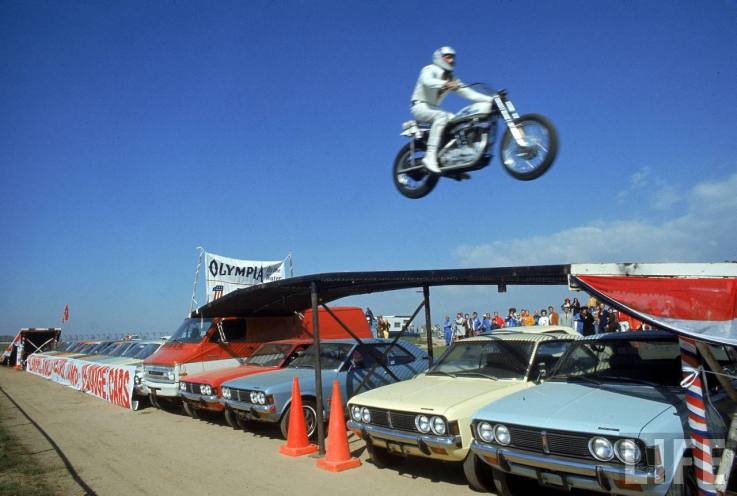 For further information:
• Check for updates at www.facebook.com/pages/Evel-Knievel-Enterprises
• Visit http://circuitoftheamericas.com/calendar