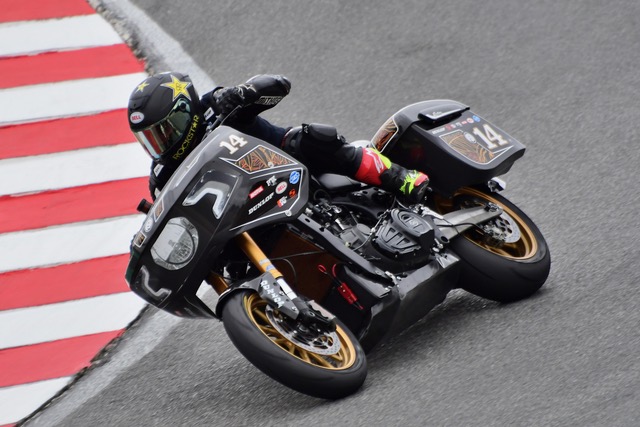 With superior stock performance, including a best-in-class 122 horsepower PowerPlus motor, an inverted front fork, and a hydraulically-adjustable FOX® rear shock, the Indian Challenger gives these three privateers a formidable advantage. This was no better evidenced than at the inaugural King of the Baggers last October where the two Indian Challenger entries finished first and third in a field that featured 13 Harley-Davidson® baggers. 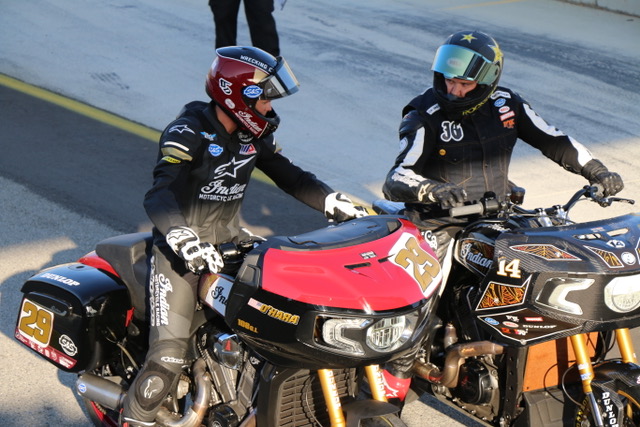 Among the teams invited to the King of the Baggers and Bagger Racing League™ events, S&S®, RSD, and Saddlemen are the only Indian Challenger entries.
Mission® Foods S&S® Indian Challenger
As reigning King of the Baggers champion, Tyler O’Hara and S&S® will enter this year as the clear-cut team to beat at round one of the MotoAmerica® series at Road Atlanta on May 2. That said, the team enters the series with nothing but confidence, backed by a full-year of preparation to defend the crown it captured in 2021. 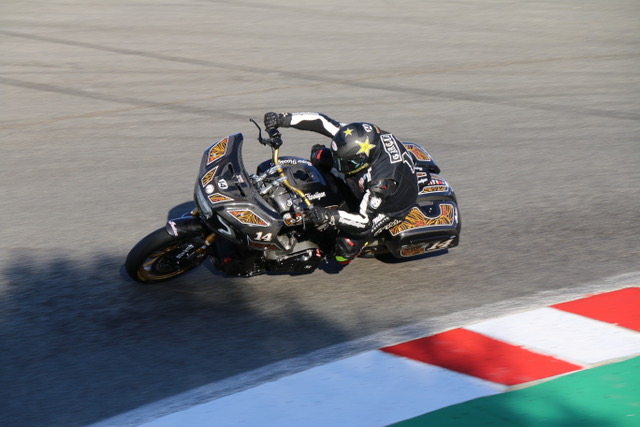 “Most race teams don’t learn a whole lot from winning, but we did. We’ve spent the past year meticulously refining our setup specific to Tyler’s preferences to ensure the highest level of performance,” said Jeff Bailey, crew chief for the S&S® team. “Backed by Tyler’s phenomenal skills, S&S® has decades of racing and performance expertise, and the undisputed bagger racing king, the Indian Challenger, our expectations are extremely high.” 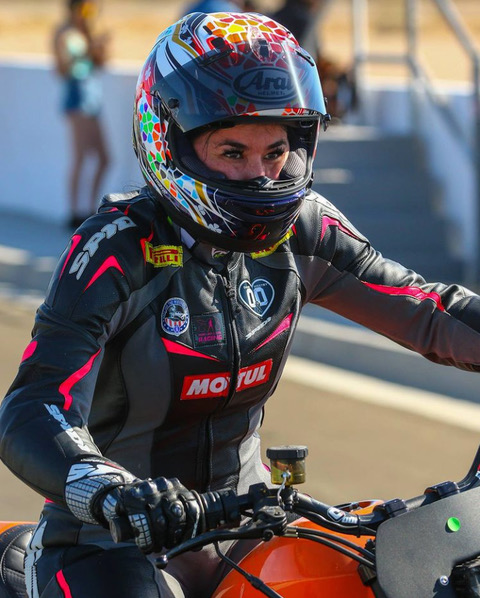 But King of the Baggers will not be the only action for S&S® and O’Hara in Atlanta that weekend. In a throwback to the golden age of the AMA Grand National Championship of yester-year, O’Hara will split duties, piloting the Indian FTR750 at the American Flat Track Atlanta Super TT the day before throwing a leg over his Mission® Foods Indian Challenger to begin his King of the Baggers title defense.
“I’ve always been known for versatility and the ability to be highly competitive on just about any motorcycle within a variety of racing formats, and this weekend in Atlanta provides the ultimate stage to demonstrate that,” said O’Hara. “There is no doubt that I’ve got my work cut out for me, but having dominant track weapons like the Indian FTR750 and Indian Challenger certainly helps. Regardless of outcomes, this is a once-in-a-lifetime opportunity to push my limits and challenge I couldn’t be more excited to take on.”
RSD
Armed with the RSD Indian Challenger, Roland Sands and the 2020 King of the Baggers third-place finisher, Frankie Garcia, return with a chip on their shoulder and ambitions to dethrone O’Hara. In addition to King of the Baggers, the RSD Challenger will be one of two RSD entries in the Bagger Racing League™ series as RSD adds the new 2022 Indian Chief to its stable of race-ready Indian Motorcycles to compete in the Big Twin class.
“We faced so many curveballs at Laguna Seca last year, not the least of which came when Frankie looped the bike in practice, and we scrambled through the night to get the bike, and Frankie’s body, ready to go for the final. Frankie putting it on the box after all that was an incredible accomplishment, and we couldn’t be more motivated to raise the bar and take the crown in 2021,” said Roland Sands. “There’s no doubt we’re the guys known for having a little too much fun, but make no mistake, the Indian Challenger is an absolute beast and our sights are set on the top of the box.”
“Last year’s inaugural King of the Baggers was an unforgettable experience and when it was all said and done, I was incredibly proud to be on the podium. At the same time, after coming so close in spite of nearly catastrophic challenges, we were all left wondering what could have been,” said Garcia. “That experience provides a ton of motivation heading into the expanded series this year and podiums will not be enough. We want to wear the crown when it’s all said and done this year.”
Saddlemen
After finishing in the middle of the pack at the inaugural King of the Baggers, Saddlemen came to the age-old conclusion, “if you can’t beat ‘em, join ‘em.”
The team enters the 2021 bagger racing season, discarding its Harley-Davidson® Road Glide® in favor of the reigning king, the Indian Challenger. To pilot the new race-ready bagger, Saddlemen called upon the highly-skilled Patricia Fernandez. Dubbed “the world’s fastest female road racer,” Fernandez will be the only female rider in the field. The team will be led by famed custom bike builder, Michael “Woolie” Woolaway, and will compete in select rounds of the King of the Baggers series and Bagger Racing League™.
“It was an honor to take part in the inaugural King of the Baggers last October, but it was obvious we needed more performance after watching Tyler and Frankie make quick work of the field aboard their Indian Challengers,” said Woolie. “This year, we have the luxury of a machine that packs enormous power and incredible performance capabilities right out of the box.”
“After seeing so much excitement around the inaugural race last year and hearing the news of an extended series in 2021, I couldn’t help thinking how cool it would be for a queen to be the King of the Baggers,” said Fernandez. “Thankfully, my friends at Saddlemen stepped up to give me the opportunity, and I could not be more excited to throw a leg over the Saddlemen Indian Challenger and show the world what I’m capable of.”
For the 2021 season, MotoAmerica® will host three rounds of King of the Baggers racing. The first round kicks off at MotoAmerica® Superbike in Atlanta April 30-May 2. The newest racing series added to the fold is the Drag Specialties Bagger Racing League™, which will host its inaugural event at the Utah Motorsports Campus June 25-27.
For more information on bagger racing, visit MotoAmerica.com and BaggerRacingLeague.com.

ABOUT INDIAN MOTORCYCLE®
Indian Motorcycle Company is America’s First Motorcycle Company®. Founded in 1901, Indian Motorcycle has won the hearts of motorcyclists around the world and earned distinction as one of America’s most legendary and iconic brands through unrivaled racing dominance, engineering prowess and countless innovations and industry firsts. Today that heritage and passion is reignited under new brand stewardship. To learn more, please visit www.indianmotorcycle.com.
INDIAN and INDIAN MOTORCYCLE are registered trademarks of Indian Motorcycle International, LLC.  Always wear a helmet, protective clothing and eyewear and insist your passenger does the same.  Ride within the limits of the law and your own abilities.  Read, understand and follow your owner’s manual. Never ride under the influence of drugs or alcohol.
Harley®, Harley-Davidson®, and Road Glide® are registered trademarks of H-D U.S.A., LLC. FOX® is a registered trademark of Fox Factory Inc.; Roland Sands Design® is a registered trademark of Roland Sands Design, Inc.; RSD® is a registered trademark of Roland W. Sands; S&S® is a registered trademark of S&S CYCLE, INC.; MotoAmerica® is a registered trademark of Krave Group, LLC; Mission® is a registered trademark of Gruma Corporation; BRL Bagger Racing League™ is a trademark of Rocket Rob Productions, LLC AKA Bagger Racing League™.
ABOUT S&S® CYCLE
S&S® Cycle was born from a passion for racing and has spent over six decades building performance for the powersports market. Their unwavering focus on quality, reliability and top shelf power has made S&S® Cycle the absolute leader in high performance on the street and track.
ABOUT MISSION® FOODS:
MISSION®, owned by GRUMA, S.A.B. de C.V., is the world’s leading brand for tortillas and wraps.  MISSION® is also globally renowned for flatbreads, dips, salsas and Mexican food products. With presence in over 112 countries MISSION® products are suited to the lifestyles and the local tastes of each country. With innovation and customer needs in mind, MISSION® focuses on the highest quality, authentic flavors, and providing healthy options that families and friends can enjoy together.  For more information, please visit www.missionfoods.com
ABOUT RSD
Roland Sands Design, Inc., a subsidiary of Roll and Company, Inc. was founded in 2005 and is a multifaceted business that includes commissioned custom motorcycle builds, aftermarket hard part design and manufacture, home decor, technical riding and casual apparel, the Super Hooligan National Championship amateur flat track series, Moto Classic Events and more. Roland Sands Design incorporates a small team of dedicated designers, engineers, fabricators, mechanics and more, that feed the collective creativity that emanates from the retail and office location at 10571 Los Alamitos Blvd, Los Alamitos, CA 90720.
Tags: 2021 bagger INDIAN moto america motorcycle racing events Roland Sands S&S