Garage-Girls and GEICO Motorcycle announced Matthew Palmer as this years Ultimate Biker Makeover winner. Matthew was selected from among over 130 entries to this years contest based on the story and photo he submitted.

It was a tough decision, as it always is, but the votes went in favor of Matthew.

SGT Matthew Palmer; a medic in the United States Army for the last 5 years, sent in a story of a horrific accident he endured on his motorcycle.  “Coming home from Camp H. M. Smith on a sunny Oahu day when I was forced to make a life or death decision.” Just some of the words Matthew used to describe his incident. Told he may never walk normally again, Matthew is determined to ride again. “The bike and I were badly hurt. Once I got to the hospital I was told I had a broken leg and arm and that both would require surgery to fix properly. I was also told that the cops never got the individuals information before he left the scene, leaving myself and my insurance to foot the bill. I don’t know if I will ever walk properly again or have  full recovery in my hand, but I will ride again. That is why I think I should be given this prize package. Not because I want you to feel sorry for me; but because I want to show everyone who has been in an accident and not gotten back on the bike or for everyone who is too afraid of what could happen, that it is okay.”

Garage-Girls and GEICO Motorcycle are proud to help Matthew along during his recovery.

Matthew will get to take home all the prizes which include; A wardrobe of shoes from Harley-Davidson Footwear, a case of full synthetic oil from Spectro Oils, A new Mustang Motorcycle Seat, a set of tires from AVON Tyres, Motorcycle Helmet, Jacket AND Gloves by J&P Cycles and Roland Sands Designs, clothing by Hinjinx Apparel, Bikers Choice and MUCH MORE!!  GEICO Motorcycle made the official announcement live on stage at the Buffalo Chip during this years 75th Sturgis Rally on August 6th! 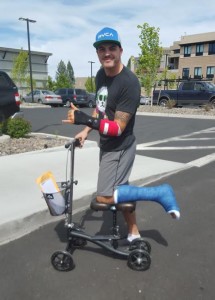 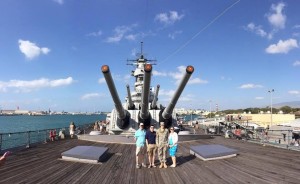