Depending on where you call home, spring is likely right around the
corner…or already on top of you! That means longer days, warmer
weather and a better excuse than ever to get out on the road. 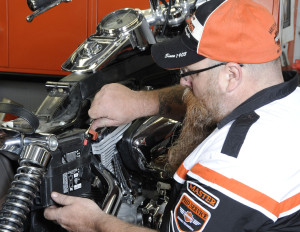 Unfortunately, months of waiting are rarely good for our motorcycles.
Especially the batteries! Even with top-quality batteries and
carefully sorted electrical systems, a little neglect can go a long
way towards ruining that first beautiful riding day. Thankfully, we’ve
got some great tips straight from the source for you. Dig into this
literature from The Motor Company, and see if they can’t shed a little
light on keeping those little lead heads charged and eager:

A motorcycle battery never gets a day off. The service experts at
Harley-Davidson® point out that even when a motorcycle is parked the
battery discharges continuously in small internal loads called
“self-discharge.” Self-discharge speeds up drastically as the
temperature rises – for example in a hot garage in the summer – and
accessories like alarm systems will further increase the rate of
discharge. If a battery is discharged too deeply, for too long, it may
be permanently damaged. Instead of a V-Twin rumble, a push on the
starter button produces … silence. And there goes a Saturday ride.

Which is why a motorcycle, that may often be parked for some time
between rides, is especially prone to battery damage from deep
self-discharge, even during the riding season. The best way to prevent
premature battery death, according to Harley-Davidson, is by keeping a
parked motorcycle plugged into a maintenance-type battery charger like
a Harley-Davidson Battery Tender. Unlike a standard battery charger,
Harley-Davidson Battery Charger products feature internal circuitry
that charges a motorcycle battery at the proper rate and then changes
modes to protect the battery from over-charging.

The Harley-Davidson 800mA Waterproof Battery Tender (P/N 66000004,
$49.95) features a three-step charging system that constantly monitors
battery voltage to bring the battery up to full charge and switches to
float mode to maintain the charge over extended periods. Its
waterproof case protects the charger from damp floors and outdoor
elements, and the charger is reverse-polarity protected and
spark-proof, even when the leads touch.

The very compact Harley-Davidson 750mA SuperSmart Battery Tender (P/N
66000038, $39.95) is an ideal take-along for touring riders. Its
built-in circuitry cycles the charger to turn itself on and off as
needed to prevent overcharging.

Both of these charges are sold with a fused alligator-clip harness
that’s handy for charging the battery when it’s removed from the
motorcycle for long-term storage, and with a fused ring-terminal
harness that can be connected directly to the battery terminals and
left on the motorcycle. It’s then easy to plug the charger into the
on-bike harness whenever it’s parked. Responding to customer input
gathered through Project RUSHMORE, Harley-Davidson has equipped all
2014 Touring-model motorcycles with a factory-installed battery
charger wiring harness.

Another option is the Harley-Davidson LED Indicator Battery Charging
Harness, (P/N 66000005, $14.95) which features ring terminals and an
integrated LED indicator light that glows when battery voltage drops
to a level that requires charging. It’s a reminder to “please plug me
in!” It’s compatible with all Harley-Davidson battery chargers and
tenders.

While the ultimate life of a motorcycle battery is determined by many
factors, according to Harley-Davidson a well-maintained battery should
deliver at least five years of service. When it’s time to replace a
battery, an authorized Harley-Davidson dealer can supply the exact
replacement battery that’s specified for each Harley-Davidson model.

New Harley-Davidson motorcycles are equipped with an AGM (Advanced
Glass Mat) battery engineered specifically for use in Harley-Davidson
bikes. These sealed batteries never need added electrolyte, and won’t
leak even if the case is punctured because the electrolyte is absorbed
in glass mats placed between the positive and negative plates. Genuine
Harley-Davidson batteries are specifically engineered and built as
part of the vehicle’s electrical system, and meet strict
Harley-Davidson design and test standards. Internal components are
designed to meet the Harley-Davidson electrical and vibration profile,
which provides superior, long-lasting durability. The patented
flush-mounted terminal design provides superior cable contact, and
stainless steel terminal bolts resist corrosion. A genuine
Harley-Davidson battery works better and lasts longer than
less-expensive, off-the-shelf batteries.

Keep sparks, flames and cigarettes away from batteries at all times.

Never lean on a battery when jump-starting a bike.

Never store a battery in a sealed container; always allow for proper
ventilation.