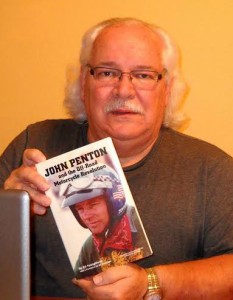 Youngblood’s book, “John Penton and the Off-Road Motorcycle Revolution,” has inspired a documentary movie entitled “The John Penton Story,” which will be released this month. Todd Huffman, head of Pipeline Digital Media, located in Orange County, California, explains, “I read the book soon after it was published, and I vowed that one day John Penton would be the subject of a documentary film.”

Huffman collected archival film and still images from California to Europe to create hundreds of hours of original testimonial footage from associates of John Penton. The movie is narrated by actor and singer Lyle Lovett, whose early youthful motorcycling experiences centered upon his own Penton motorcycle.

Youngblood was also interviewed for the project. He says, “I am thrilled that I’ve had any involvement in inspiring Todd Huffman. He is a man in the model of John Penton; dynamic and determined and willing to nurture a dream for years in order to make it come true. I’m very excited about attending the premier of ‘The John Penton Story’ next week.”

The documentary will premier in Cleveland, Ohio on June 9 and in Los Angeles on June 17. Cleveland was chosen because it is near the Penton home in Amherst, Ohio. Penton, now 89, will be guest of honor at the premier.