The Twisted Sister frontman is leading a charmed life and that’s entirely due to his relentless energy, unapologetic lifestyle and PMA. Keep your eyes peeled as you ride the Black Hills: Snider is doing the same thing after playing at the Buffalo Chip on Monday. What’s PMA? Read on. 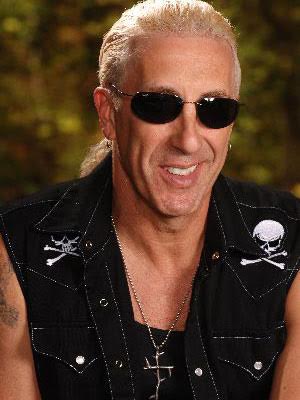 SRD: You’ve been riding and coming to Sturgis for years, right??
DS: I was there in the heyday, the halcyon days of $75,000 motorcycles. I’ve certainly had my share of custom choppers but I think it’s great that it’s turned back to a more realistic place. Now it’s all about doing it yourself, tearing it down and not being afraid to try. That’s the real spirit of riding and the motorcycle community. And look how PC we are: even metric bikes are accepted now. People just want to get in the game and its great.

SRD: So do you work on your own bikes?
DS: I’m terrible with a wrench but as a devout Horse reader I find myself sorely tempted to take an old bike and go for it. I try to wrench but all my wrench buddies get so impatient watching me struggling, they just say, ‘Gimmie the damn wrench.’

SRD: That’s such a positive attitude.
DS: At 16 years old I bought into this thing: PMA, Positive Mental Attitude. And I came to this realization that if you went around thinking positively it would basically be a self-fulfilling prophecy. My dad used to make fun of me. Every time things went wrong, and certainly a lot of things did, he’d say, ‘PMA, Dee, PMA!’
That’s why I immortalized him in the We’re Not Gonna Take It video. He used to scream at me ‘What are you gonna do with your life’ all the time. ‘I fought in Korea and you’re playing a guitar?’ But now, he goes, ‘Wow, PMA! PMA! It worked!’

SRD: So you had a solid middle class upbringing.
DS: My parents drank very little and didn’t smoke or do drugs, as far as I know. They were first generation, married a long, long time. The idea of taking responsibility for the life you choose, your actions, your children, were definitely good examples. A prime example of that was when I was on Celebrity Apprentice and I broke my finger in one of those stupid challenges. Donald Trump said: ‘I can’t believe you didn’t sue me! Everybody sues me!’
But I wasn’t raised that way. You don’t blame others for your failings. I mean, I got on a horse sidesaddle wearing a princess gown and a tiara! Nobody had a gun to my head. I got thrown from the horse and snapped my finger.

SRD: You were upfront about your beliefs when you testified before the U.S. Senate about lyrics censorship.
DS: Yes, that was 30 years ago! I’m talking to Rolling Stone when we’re done here, me being the only rocker left alive who testified. (John Denver and Frank Zappa have both passed away.) I still get a lot of respect from people about that.
I am a big supporter of the amendments – all of them. But I’m also pro choice to the max: you should be able to speak as you wish, you should be able to protect yourself as you wish, wear a helmet if you wish. I stood up, I did the right thing and I’m proud. At the time it was not a wise choice.
Post testifying, my phones were tapped, my mail was checked and it was damaging to my band, Twisted being the poster child for everything wrong with heavy metal – except we weren’t! The irony is, as crazy as we were we didn’t sing about sex and drugs, we sang about standing up and fighting for your beliefs. We were about empowering people with our music.

SRD: What’s it like to play the Buffalo Chip?
DS: I’ve been out there 8 times. I started coming out when I was hosting the VH1 Classics show All roads Lead to the Chip. I’m great friends with the Woodruff family and I love the experience. It’s something I tell riders, go to the Chip at least once, there’s nothing like it.
This year I’m coming out to perform with a solo band. It’s gonna be great to play for the Chip audience but I’m also leaving a couple of days to hang out and ride with a buddy of mine.

SRD: I have to ask about your hair. You know the ‘80s are over, right?
DS: First of all, mine is naturally bouffont. Everybody else was using VO5 and Aquanet to keep theirs looking big but I’m the original hair farmer. My wife swears the longer I’m on stage the bigger it gets. When I’m on stage it’s very Samsonian, it’s like my strength comes on when I let my hair down and ROCK! You gotta have something to flail around or you’re not rockin’.
You know, I get credited by some with actually inventing head banging, which I don’t think is true. I was just trying to get the hair out of my face.

SRD: Are you still not gonna take it anymore?
DS: First of all it goes back to the review. I think it was Rolling Stone that gave the single this review when it first came out: ‘What from whom?’ That was it, three words, a three word review! So f**k you, Rolling Stone, It’s one of the greatest songs of rebellion of all time, and it has staying power.

SRD: So: What from whom?
DS: It’s like this: When you’re a kid it’s all black and white but when you get older you realize things are not black and white, not if you’re a thinking person and I’m a thinking person. Inspirationally, it was about my dad, my teachers, the bosses, the kids in school who rejected me, the girlfriends who’d tell me I was never gonna be anything. I wrote it so people could read their own situation into the lyrics.

SRD: You seem so happy for a guy whose persona is being a heavy metal madman.
DS: I feel blessed to have had my moment in the sun – and I’ve been refusing to leave ever since.