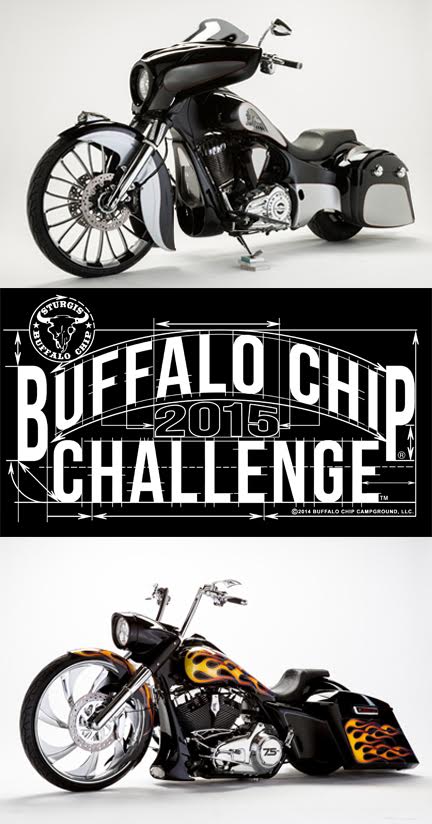 Deadwood, SD (August 3, 2015) – Riders in the Sturgis Buffalo Chip®’s signature Legends Ride® cheered Monday as the two student-built Buffalo Chip Challenge bikes were sold at auction, raising a record amount in support of the annual charity event. The two bikes up for auction were a 2014 Indian Chieftan customized by a team under the direction of Keith Terry, John Shope and Chris Malo, and a 2014 Harley Davidson Road King customized by a team led by Randy and Nick Cramer and Paul Yaffe. Collectively the bikes brought winning bids of $120,000, with the Team Yaffe Harley going for $60,000 and the Team Shope Indian bringing in $61,000 all in support of the Legends Ride. The Legends Ride has traditionally supported local charities, Black Hills Special Olympics and the Sturgis Motorcycle Museum. In addition to donations to these two causes, ride donations for this year’s event will also help students interested in a career in the motorcycle industry by providing educational scholarships. After seven consecutive sell-out years, the ride has raised more than $375,000 for charity.

“The Legends Ride is one of the most popular annual Buffalo Chip events and not only gives riders a chance to meet some of the biggest celebrities at the rally, but more importantly supports some incredibly worthy local charities,” said Rod Woodruff, Sturgis Buffalo Chip CEO. “We are most excited about the opportunity this year to encourage students to pursue a career in the motorcycle industry. Everyone who has taken part and paid the rider fee helped to fulfill the dreams of students and special athletes.”

Some of the biggest names in television, film, music and motorcycling joined hundreds of riders from around the globe for the annual ride through the scenic Northern Black Hills that raises money for the local charities. Hundreds of Legends Riders gathered on Deadwood’s Main Street this afternoon to take part in the auction and socialize with these celebrities.

The ride departed from Deadwood’s Main Street at 3:00 p.m. and led participants through the scenic areas north along the foothills of the fabled Black Hills. The ride culminated at the Buffalo Chip with a private catered reception and pre-concert party.

The Buffalo Chip’s Legends Ride has been featured on CMT, the National Geographic Channel, the Tonight Show, FX Network, Funny or Die and the Travel Channel, as well as countless print, online and newspaper articles.

The Sturgis Buffalo Chip is the Largest Music Festival in Motorcycling™. It is the world’s first and leading entertainment destination for the motorcycle enthusiast. Established in 1981, the venue’s high-profile, nine-day festival, known as The Best Party Anywhere™, remains one of the world’s most televised and longest running independent music festivals. Buffalo Chip guests have the freedom to party and play while experiencing world-class concerts, outrageous events, moving freedom celebrations, thrilling PowerSports and more. Located three miles east of Sturgis, SD on 600 creek-fed acres, it offers cabins, RVs, camping, a swimming hole, bars, mouth-watering food, showers, paved roads, and more to visitors traveling from all corners of the world. The Chip’s concerts are free with camping. More details are available at www.BuffaloChip.com.

The Sturgis Buffalo Chip’s Legends Ride is dedicated to bringing rally goers together to raise significant funds for local charities and the Buffalo Chip Challenge Scholarship Program.  Having raised over $375,000 for charity since its inception in 2008, the Legends Ride has played host to some of the biggest names in television, film, music and motorcycling, along with riders from all corners of the world.