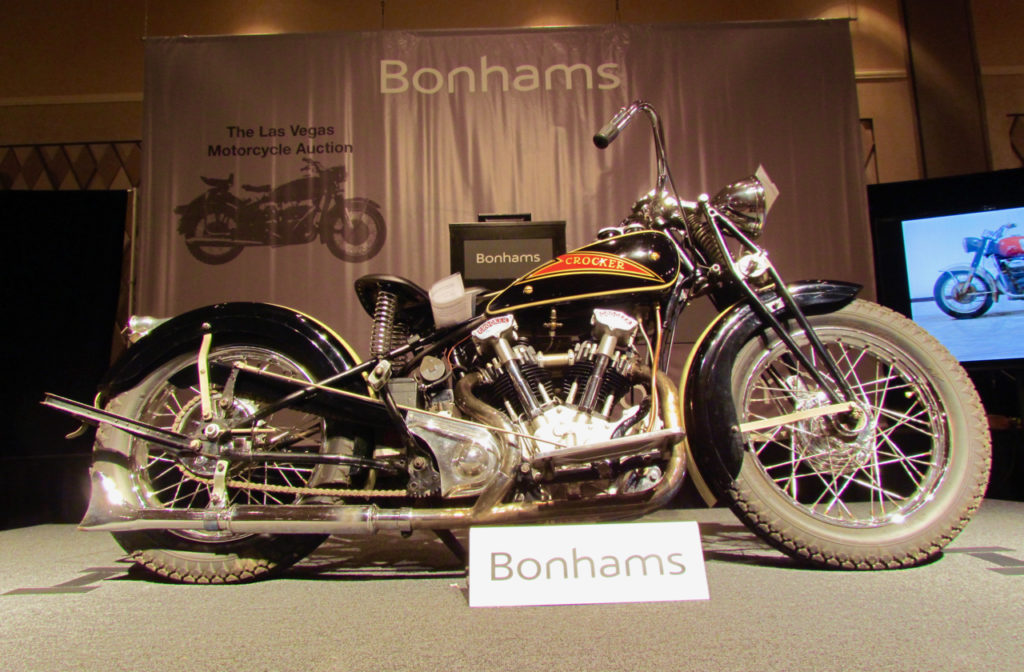 From the hallowed Vincent marque, a brand for which Bonhams holds the world auction record, is a matching numbers 1950 Rapide Series C Touring Model in original Chinese Red, one of just 76 ever produced. In highly original condition, this rare machine will be accompanied by another highly desirable Vincent, a matching numbers 1950 Black Shadow Series C. Also English, and also tremendously sought after, is a 1926 Brough Superior SS80 from one of the most legendary motorcycle manufacturers in history.
From the United States is truly a standout machine – a 1938 Harley-Davidson EL Knucklehead in original, unrestored, running condition. Just two owners from new, it was purchased by the vendor from the son of the original owner. With the interest in Knuckleheads having exploded recently, this time-warp motorcycle is sure to bring strong interest.
Italian offerings include an exemplary 1975 MV Agusta 750S America that is also just two owners from new and has the four-into-four race exhausts and a tank autographed by John Surtees. And from the world-renowned Silverman Museum Racing Collection are four exceptional motorcycles of remarkable pedigree: 1954 Ducati 125 Marianna Sport, 1955 Ceccato Corsa 75 SOHC, c.1956 Ducati 100 Gran Sport and 1958 Ducati 125 Grand Prix Racer.
Says Andy Barrett, Bonhams’ Motorcycle Specialist, “We’re delighted to be returning to the world-famous Rio for Bonhams 8th annual Las Vegas sale with some exceptional machines to accompany the exquisite Vincent Black Lightning. There are some outstanding classic, vintage and pioneer examples already consigned, such as the 1926 Brough Superior SS80 and original 1938 Harley-Davidson Knucklehead, and we’re looking forward to what promises to be another stellar sale.”
“I am very excited to have joined the Bonhams team for what will be my first Las Vegas sale,” says Bonhams’ newest Motoring Department appointee, Craig Mallery. “There are some truly remarkable machines and I am looking forward to seeing Las Vegas transformed into the center of the world for collectable motorcycles.”
To learn more about the Thursday, January 25th auction at the Rio Hotel & Casino in Las Vegas, including how to register to bid and order a catalog, visit bonhams.com/vegas.
Tags: 8th ANNUAL bonhams featured las vegas auction motorcycles world-class