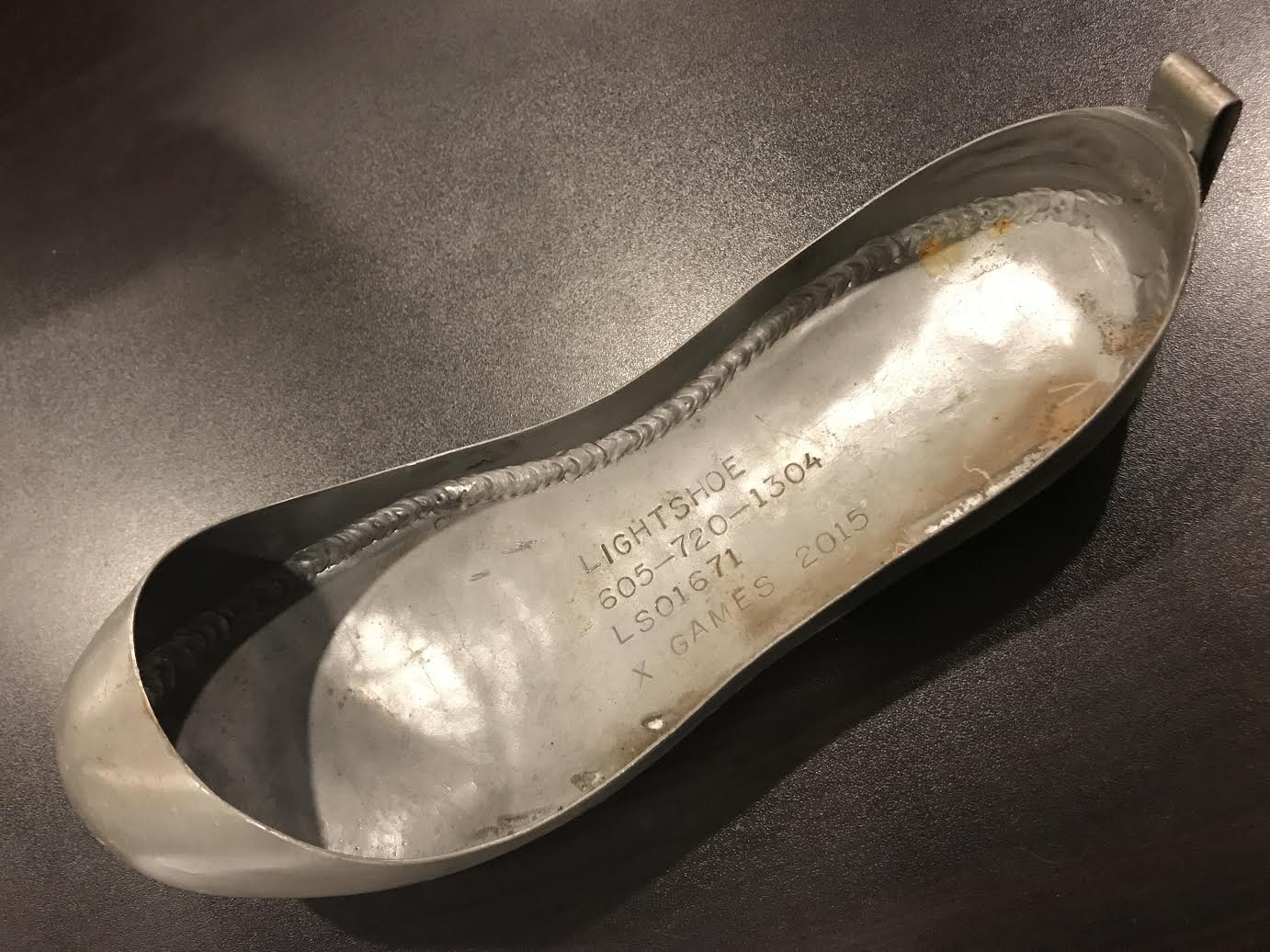 What’s a steel shoe? Explains Kinzler, “A hot shoe, steel shoe, or skid shoe as it has been called, is a metal ‘slipper’ that fits over the racer’s left boot. It is usually held on by a strap or screwed into the heel of the boot. It allows the rider to put their foot down while sliding through corners.” 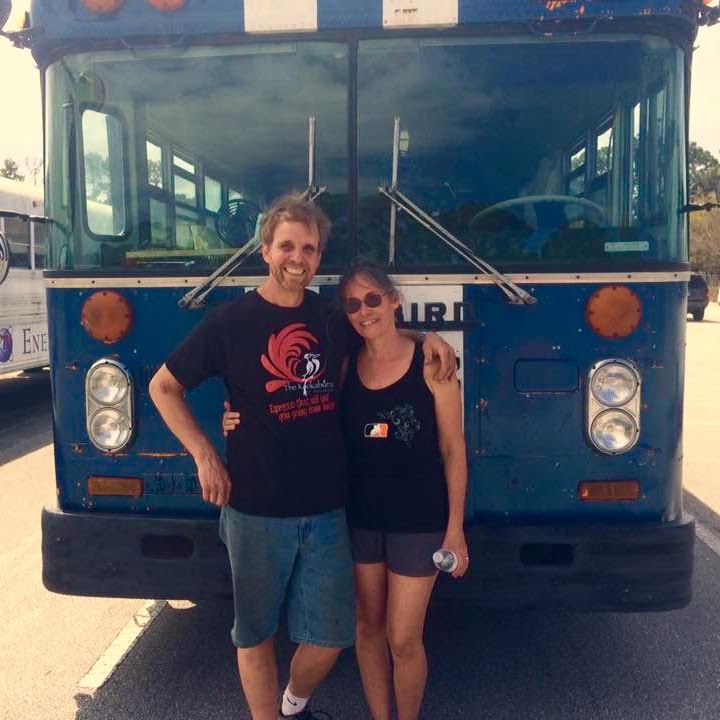 Making steel shoes is an unusual business, one with more nuances than you might expect, and Kinzler is one of very few people with expertise in this super-specialized area. But with the increase in popularity of Hooligan Racing and American Flat Track’s pro series, Kinzler‘s talents might be poised for an imminent bump in demand.

Kinzler learned to make steel shoes by necessity – and by trial and error. He raced when he was younger and, like most amateurs, flew on fumes. “I didn’t have enough money to buy a steel shoe when I needed one so I had to learn to make one. I learned to weld from my dad.” But he wasn’t long for the track; once he started breaking bones he looked for another way to participate. 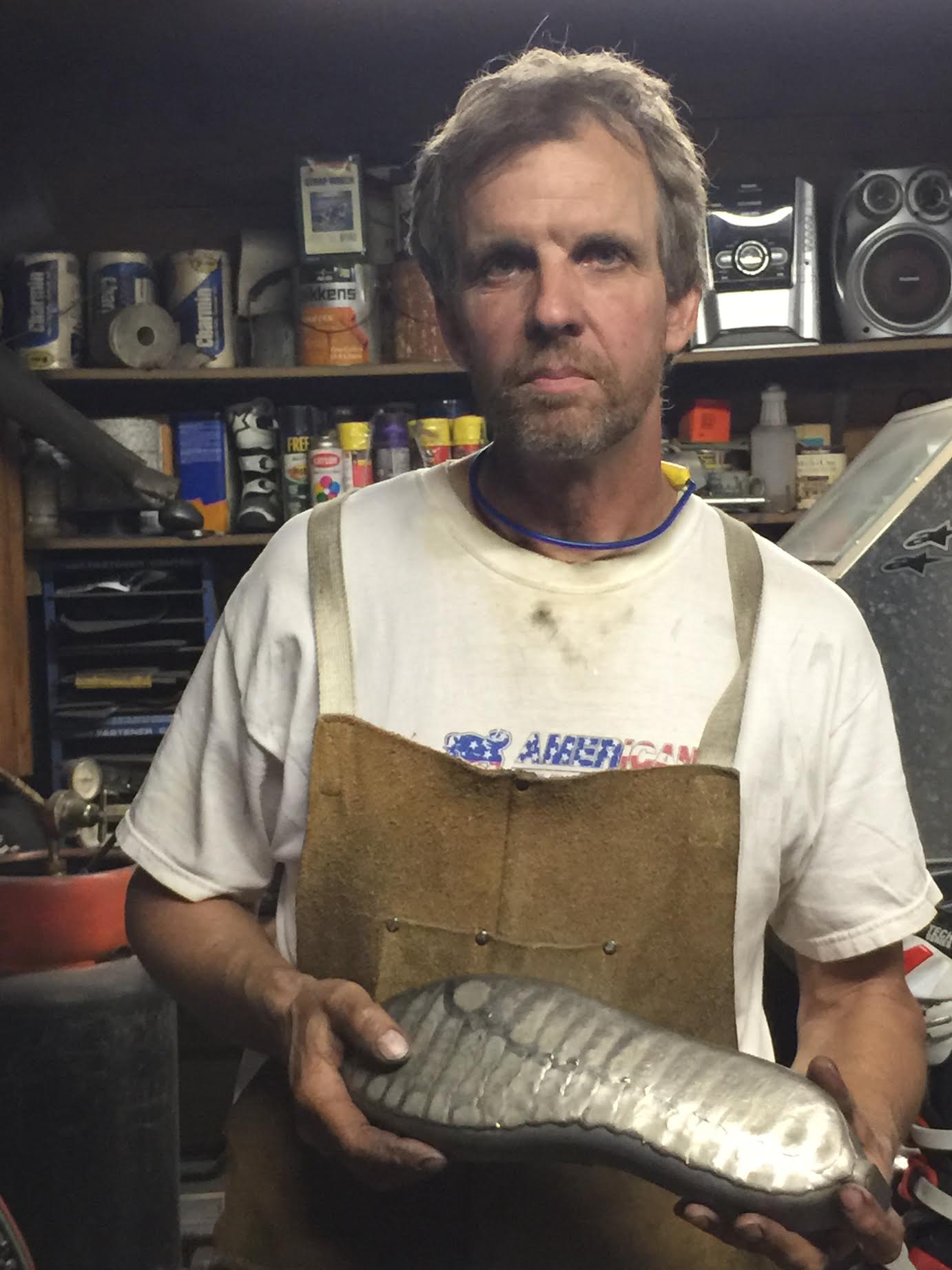 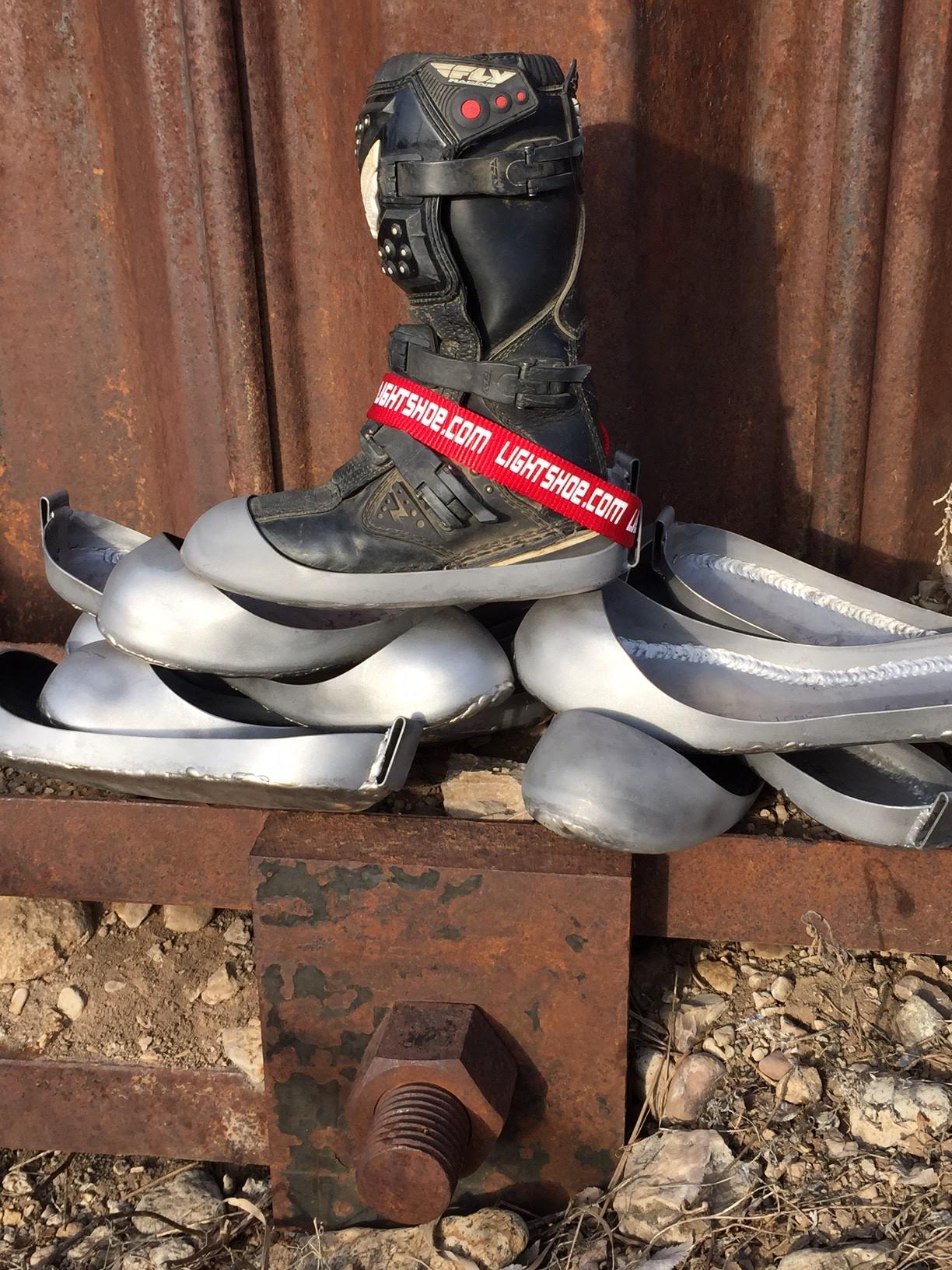 Things ramped up when his two sons started racing and he thought steel shoe fabrication might be a way to finance the family race efforts. This led to plenty of experimentation with materials and designs.

Early in his learning curve Kinzler searched out racers to sponsor and that’s how he met Joe Kopp. Kopp said he’d get leg cramps from wearing a heavy steel shoe. “Cramping up going into a corner at 120 mph? That’s the worst case scenario,” said Kinzler. So he started making lighter weight aluminum shoes for Kopp but they wouldn’t last. He tried for four or five years to make aluminum work but the matrix simply wasn’t strong enough. 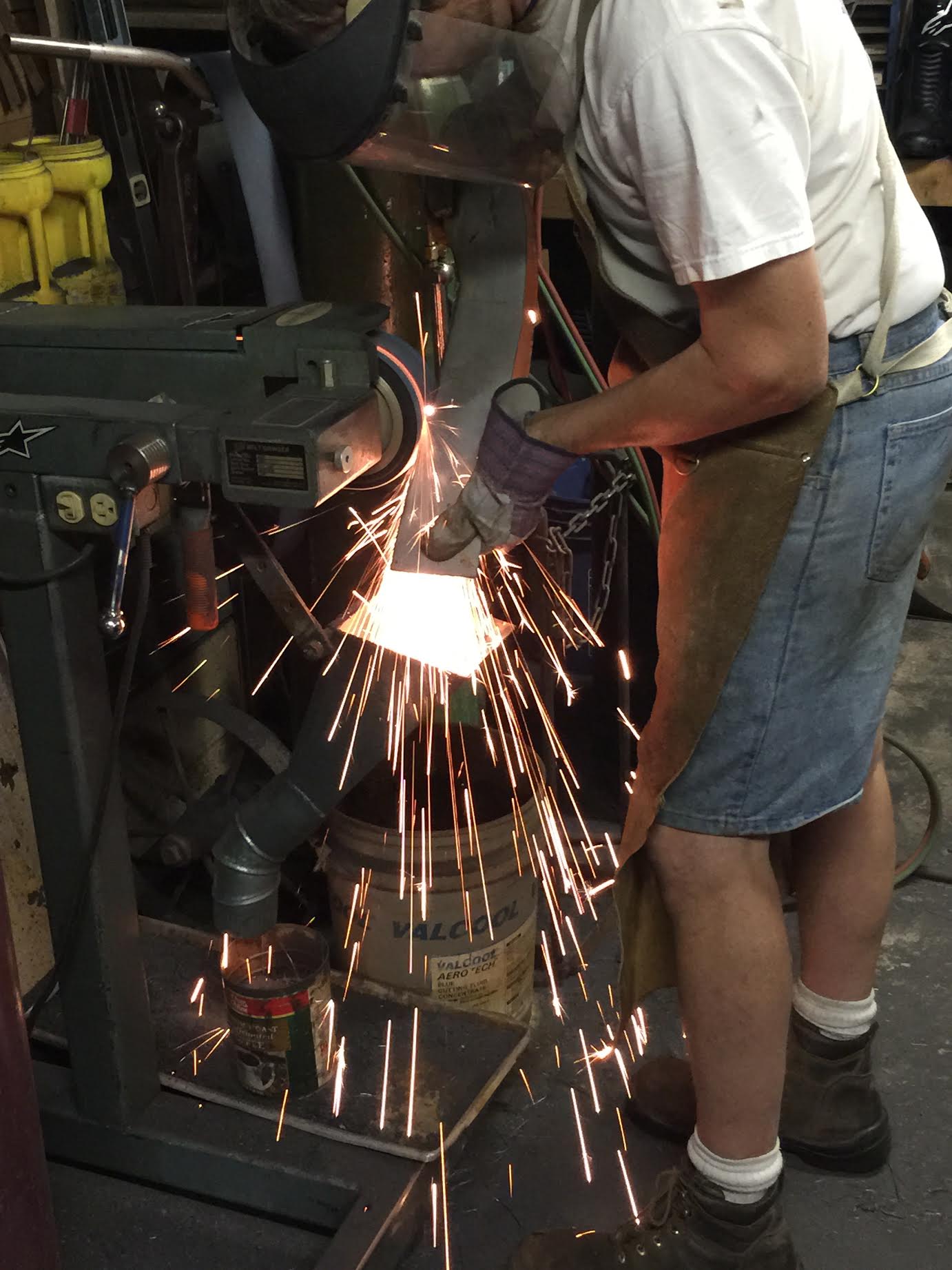 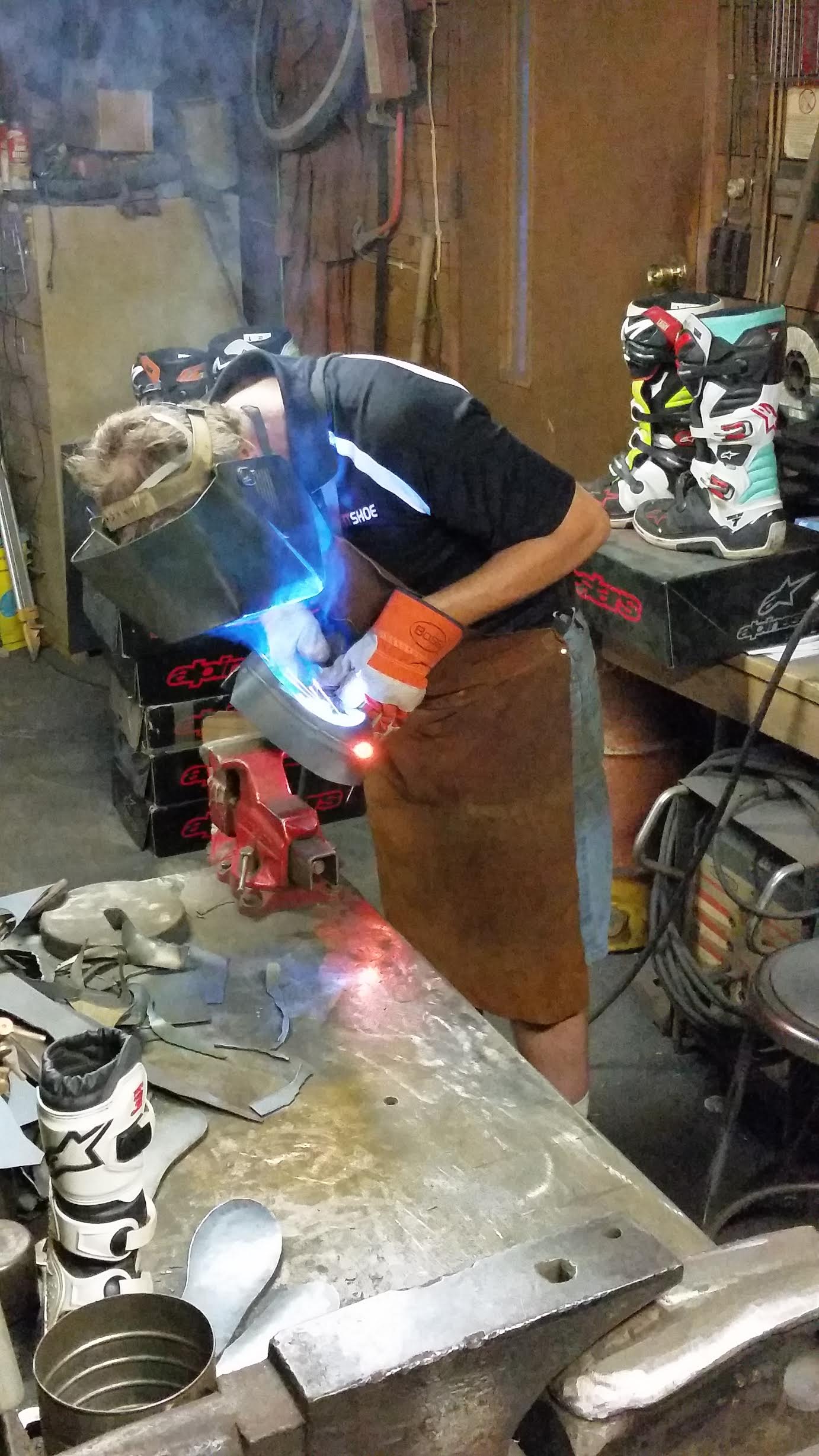 During his experimentation years he saw his shoes fail over and over. “It was so demoralizing. I couldn’t sell something that failed so I quit making them,” he said. Then in 2002, he talked to some racers—in particular, Chris Carr—who said they needed him to start making steel shoes again.

So he re-thought the traditional three-piece design of sole, toe and heel. That thick bottom provided strength but it was heavy. Gary’s re-design with a one-piece sole emphasizes structural integrity and eliminates weak points. It’s stronger and lighter. “It’s like the uni-body on a car: the body is the frame and it’s strong structurally from the start,” he explained. 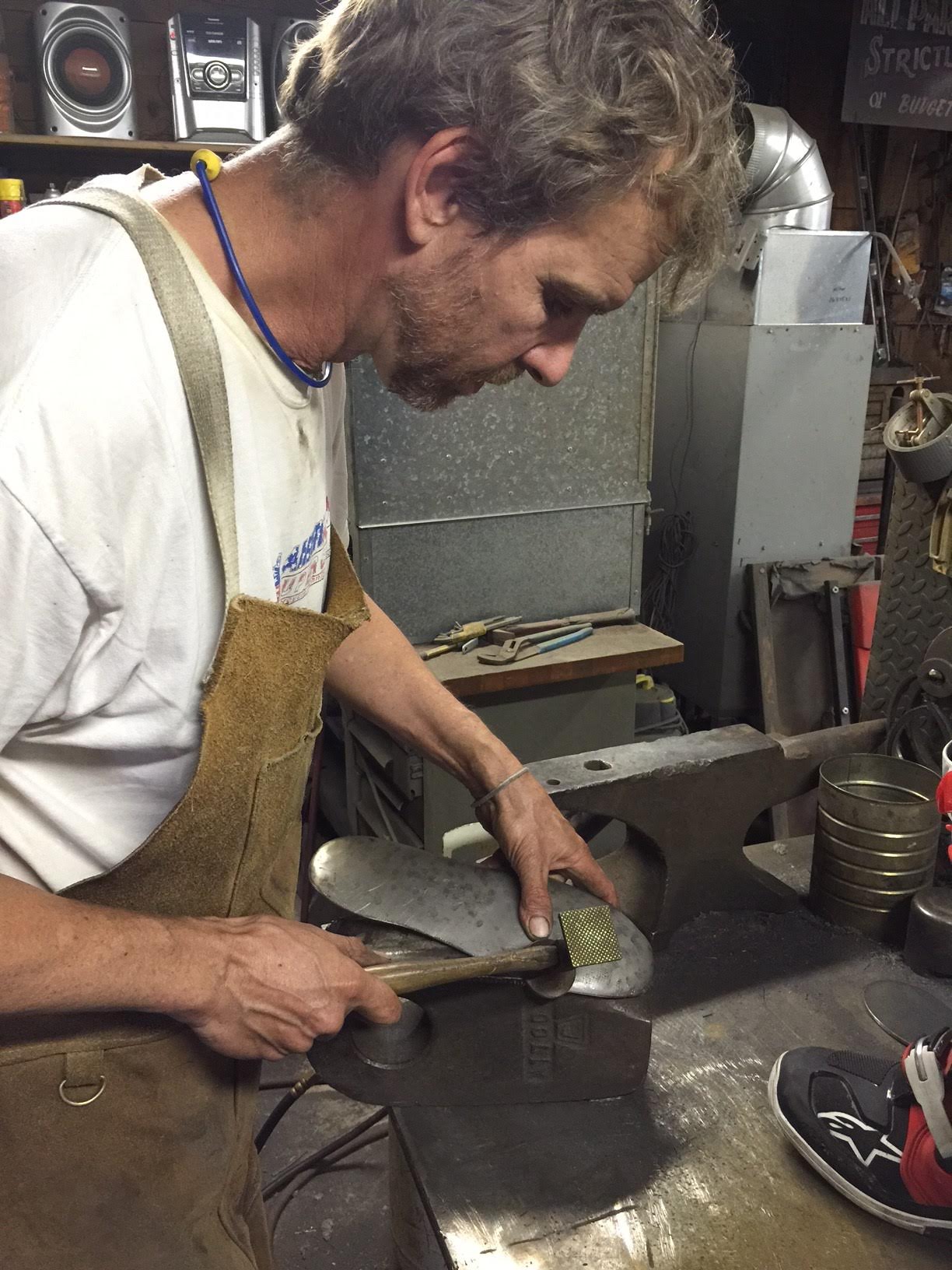 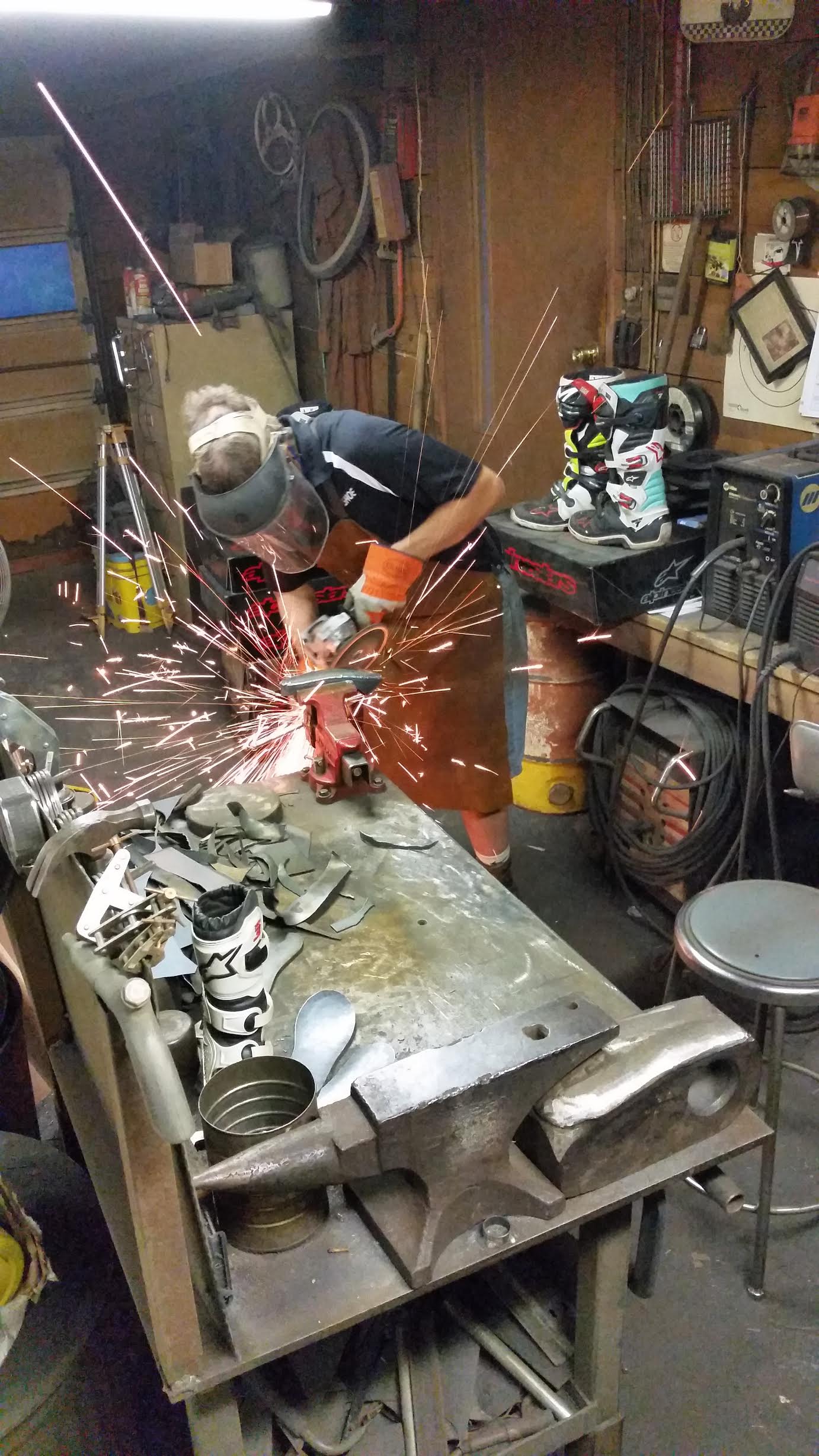 His fabrication process goes like this: the sole is plasma cut from sheet steel then the LightShoe logo and serial number are stamped in. (Yes, each one is numbered; Kinzler is over 2220 now.) He shapes and grinds the sole to correctly fit the bottom of the racer’s boot then tack welds the toe in place, followed by bead-blasting and hard-surfacing, braising nickel over steel. The hot shoe is held on with a strap.

He’ll tell you that the best steel shoes incorporate the optimal combination of design, materials and construction – and as hard as he’s worked toward reaching that goal he’s still making improvements. And he still asks racers to test his shoes.

Many factors can affect a steel shoe’s longevity: track surface, shape of the track, the racer’s style and how often the foot touches down. Resurfacing and repair work are frequent requests and as a one-time racer himself Kinzler knows that proper fit goes to safety, too. “If your steel shoe comes off, the race is over,” he said.

But as much as he concentrates on product quality, Kinzer believes LightShoe’s competitive advantage is customer service. “You have to cater to the customer and stand behind the product. If something’s wrong, we address it!” LightShoe steel shoes sell for $275, including shipping, and come with a one-year guarantee.

Look for LightShoe’s converted Bluebird school bus at races where Kinzler works on the spot. As many race teams have learned, it’s handy to have a competent welder nearby. From Kinzler’s POV, he’s glad to help when called upon. He donates to fund raisers and tries to stay involved when there’s a need in the flattrack community. “Sure, it’s good visibility, but you give not with the expectation of getting something back but because it’s the right thing to do,” he said.

Kinzler has lived in Sturgis since he was a child—his dad was a Jack Pine Gypsy—and he’s pleased to see dirt track races happening at the Buffalo Chip in 2017. The Chip’s new TT track, which includes right hand turns, is especially cool. Why? Well, for one thing: Maybe racers will need a hot shoe on the other foot, too! 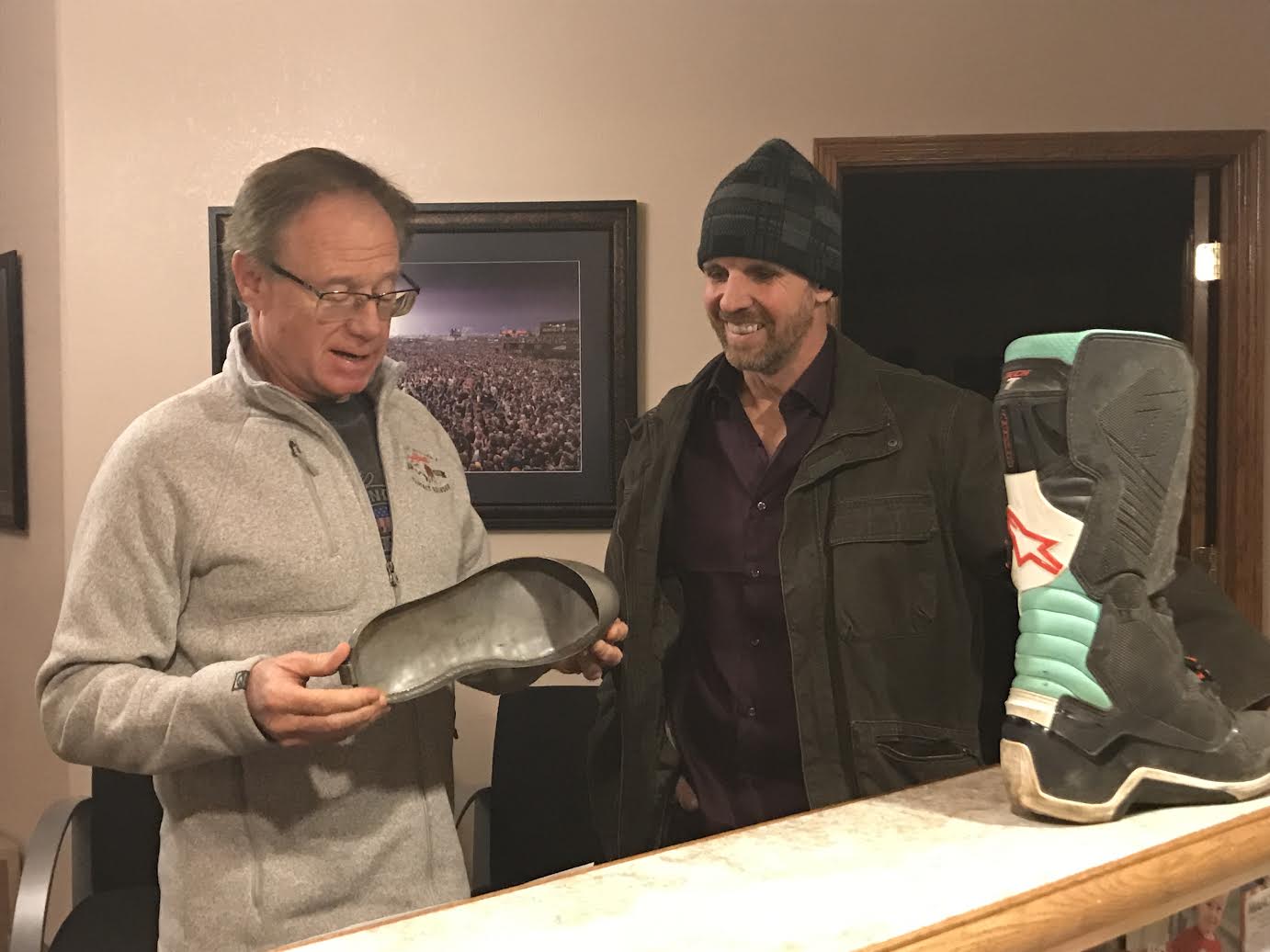 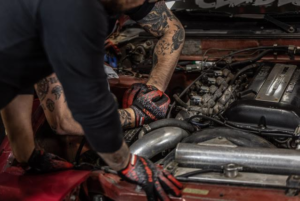 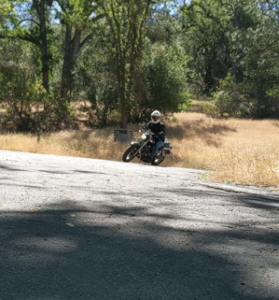