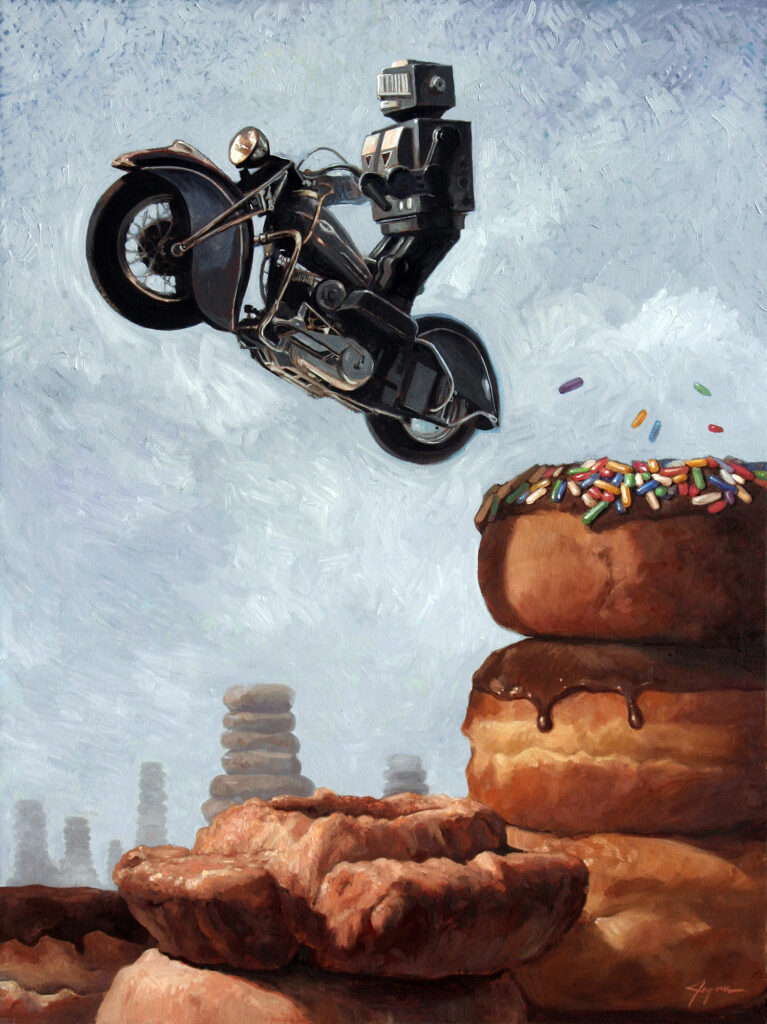 You know that, when I don’t ride, I spend (lose?) a little time on social networks trying to find artists linked with the motorcycle world  … and as I’m a lucky guy, I regularly meet amazing persons, mainly painters, living of their artwork. Remember the posts I wrote about Masha in Ukraine (she’s still currently living between air alarms and shelters), Gianpa the Italian, Noémie and Noir Mat the French painters – see the Across the Pond section) …

Today, I’m so happy to improve your contemporary artistic culture introducing to you the fabulous ERIC JOYNER!!! 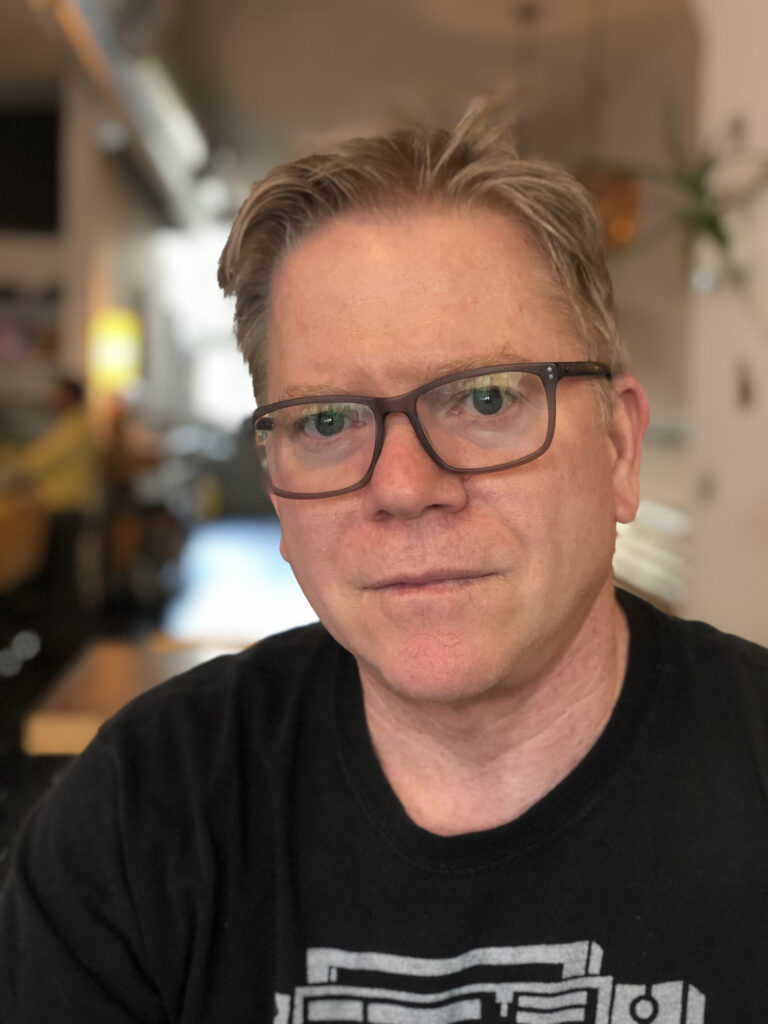 When you meet Eric, of course you learn about his official story : borned in San Mateo, a suburb of San Francisco, his childhood was fairly uneventful, doing the usual things most kids did, reading comics (mostly Mad, Creepy, Eerie and newspaper comic strips), playing sports, and going to school, as well as drawing and painting. He remembers going to a huge Van Gogh exhibit as a child at the De Young in SF (and being very impressed) and taking painting lessons with his older sister at the local recreation center. Sometime in the first grade, classmates and teachers started to take notice of his work and eventually some of his paintings from the fourth grade class, along with some other students work, were chosen for an extended statewide tour. 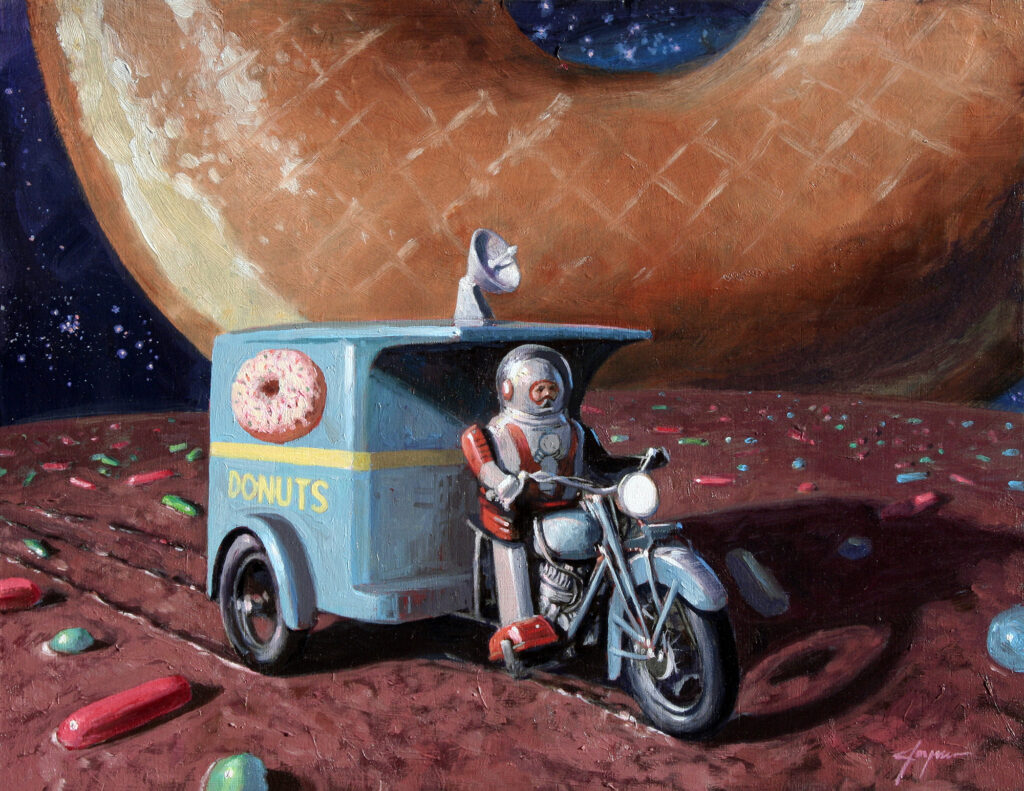 In high school, I spent most of my energy on drawing, painting and working in a lumber mill to save up for school. After winning a few awards, I knew I’d be attending art school. So I left home (in Oregon) and attended the Academy of Art in San Francisco for four years. While there, I made a few friends and won some awards. Later, with influential teachers like Francis Livingston, Kazu Sano, Bill Sanchez and Robert Hunt, my illustration skills improved and soon was getting a few advertising jobs during his last semester at the Academy (mostly pen and ink and school book assignments). 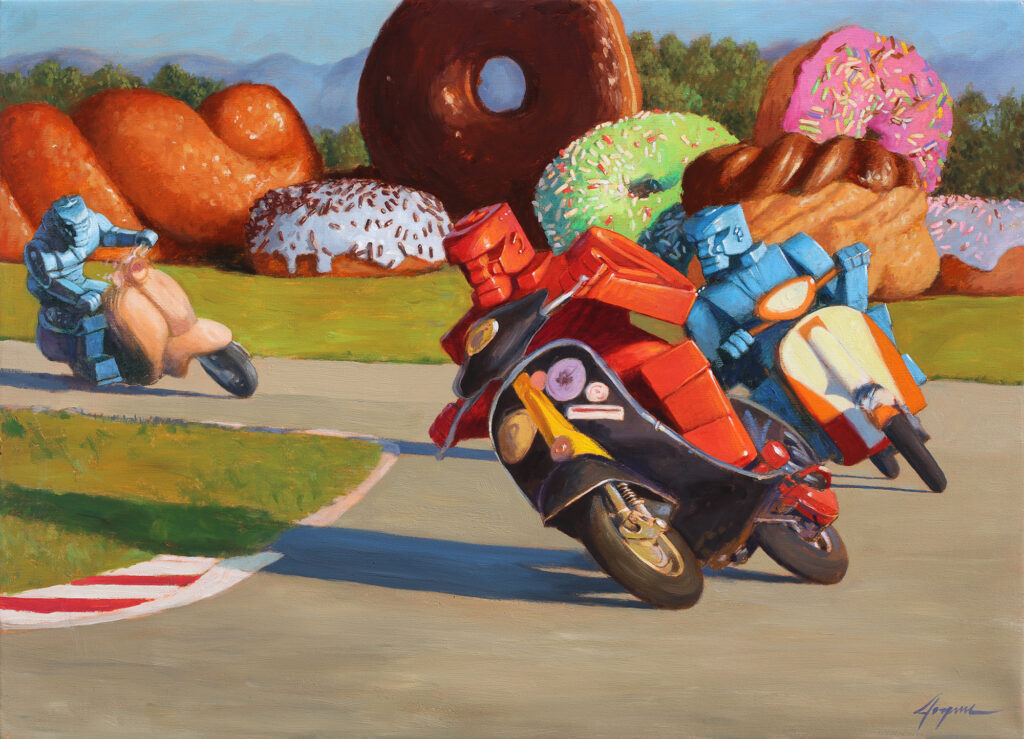 After art school, he joined the San Francisco Society of Illustrators and participated in their annual shows, charities and Air force art programs. The clients were educational publishers, high tech companies, card companies, magazine publishers and advertising agencies. In 1989 he won two gold medals in the S.F.S.I. annual show. 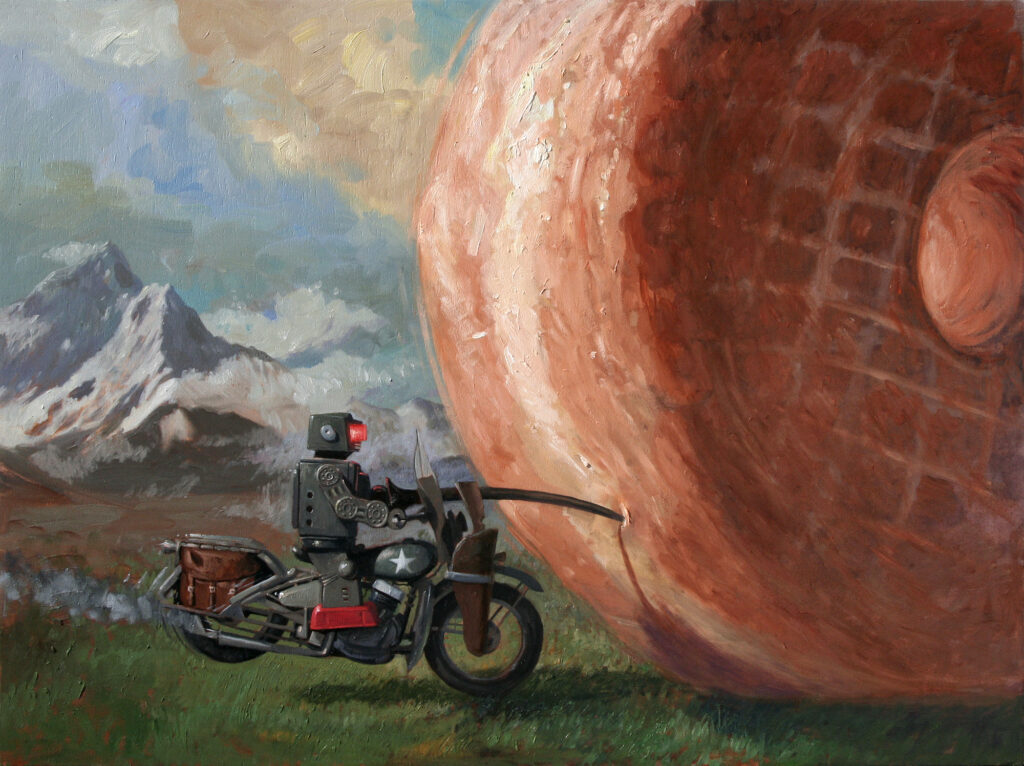 During the recession of the early 1990s I took a computer animation assignment, not knowing mouse from a hole in wall…learning 5 programs at the same time and trying to meet deadlines may sound fun, but I don’t recommend trying it. Anyway, after 3 months of torture, I chose not to pursue animation. The training was good though and still use some of the things I learned. A few years later, I took a job texture mapping and got to relive the learning/producing nightmare. The next job, doing backgrounds for internet cartoons at Spunky Productions, for some reason, was not such a headache. 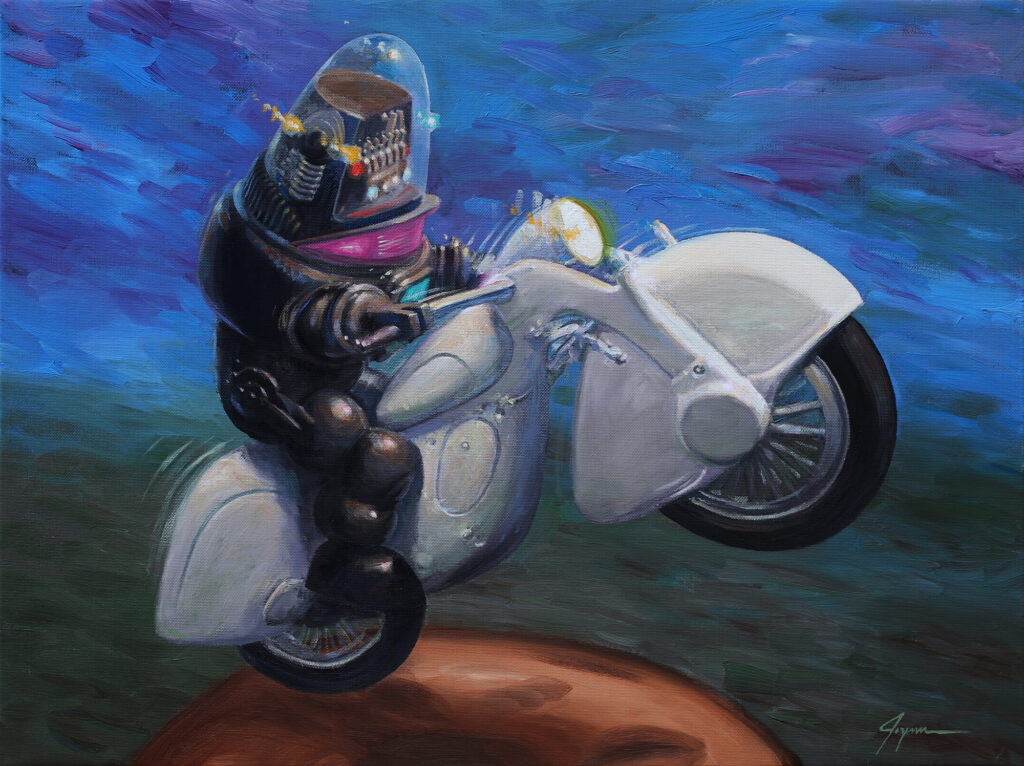 In 1999, he started to enter various juried shows at Artisans Gallery in Mill Valley, CA. and the work was well received. Shows in other galleries, (usually group shows) were positive as well. In 2000, after years of painting other people’s pictures, he made the decision to only paint things that he liked. Four series of paintings of different subjects were started; they were: San Francisco urbanscapes, paintings of old newspaper cartoons characters, Mexican masks, and last but not least, Japanese tin (toy) robots. Though all four series of these subjects were enjoyable to do, he chose to focus on the tin robots, as they were the most popular and seemed to have the most possibilities. 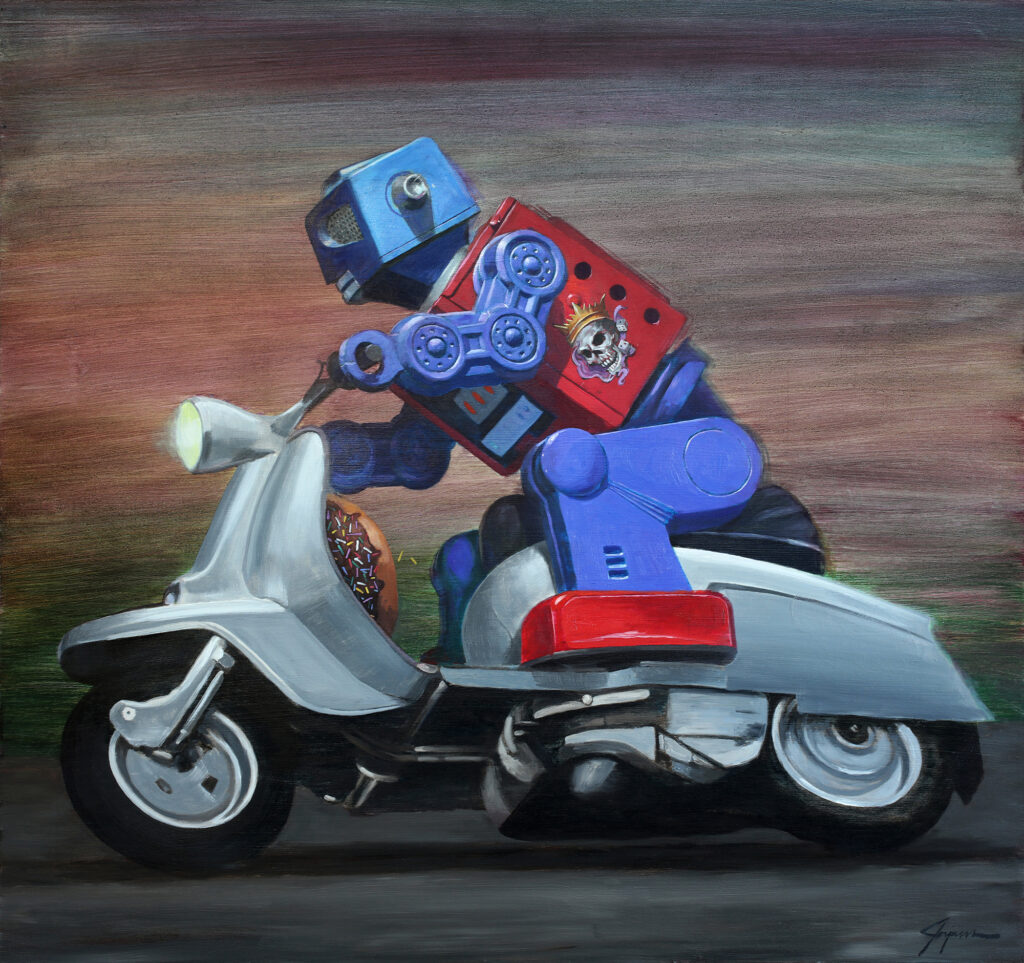 So, armed with a small collection of tin robots and spaceships he began painting them in earnest. In attempt to bring them to life without loosing their charm, he showed them where they belonged: outer space. By 2002 the paintings were looking good, but they still needed something to play off of… perhaps a nemesis. After a month or so of searching for a ‘nemesis’ he had an epiphany while watching the movie ‘Pleasantville.’ In one of the scenes, Jeff Daniels paints a still life of…donuts. With thoughts of Wayne Thiebaud’s pastries always close at hand, it wasn’t difficult to see the battle scene of robots retreating from 300-foot tall donuts when he went to bed that night. The rest, as they say, is history. 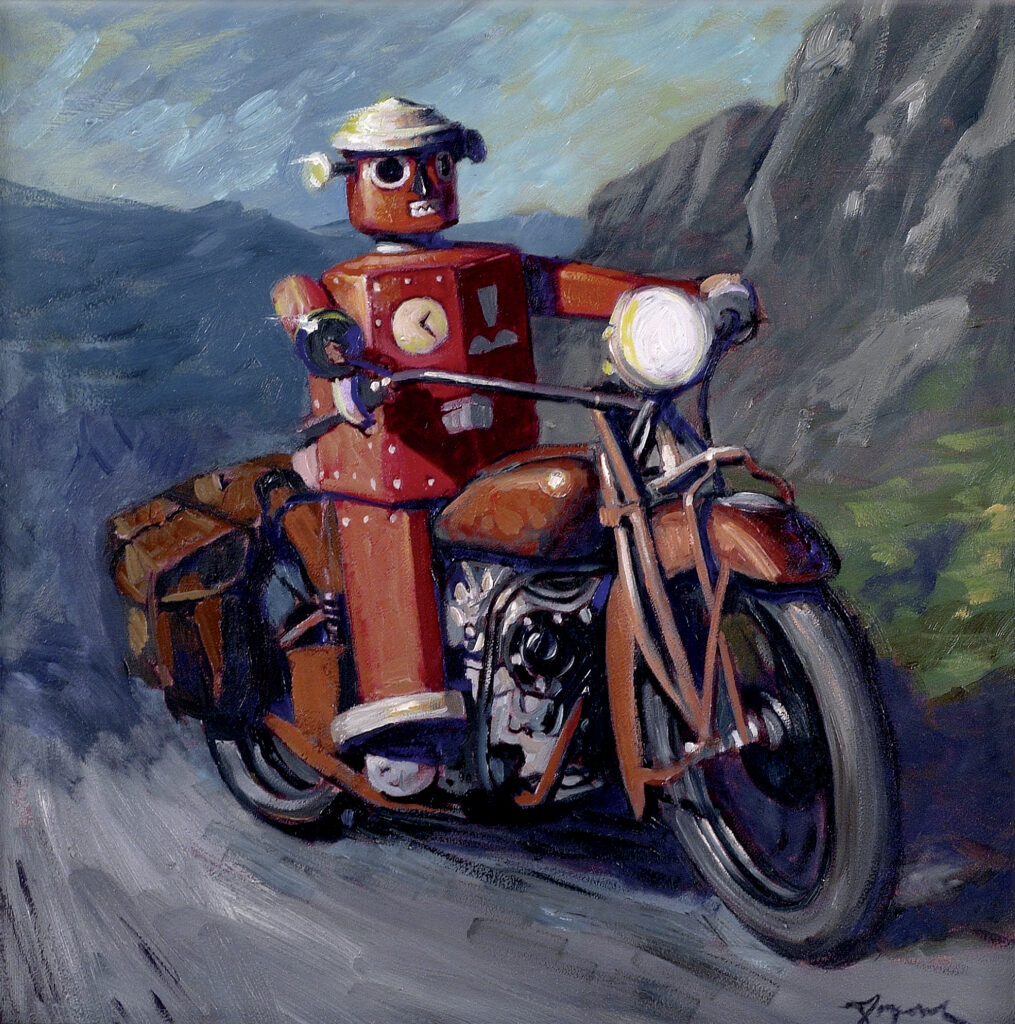 Hey Joyner, which kinda bike do you ride, which kind of biker are you? 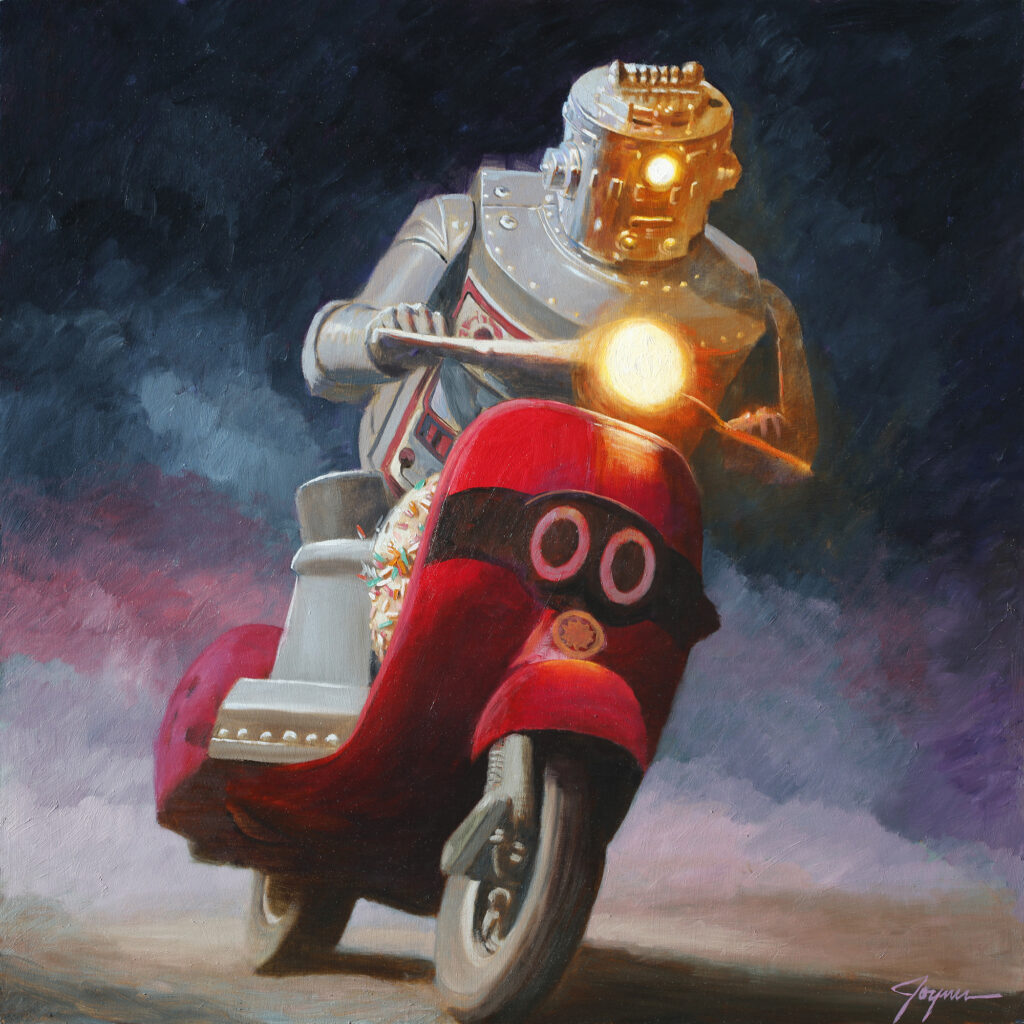 Eric answers me that he’s not insane, but the years flew by and now, at age 62, he will probably never take up motorcycle riding even though it has been one of his fantasies, ever since watching Steve McQueen in ‘The great escape’ and ‘On Any Sunday’. 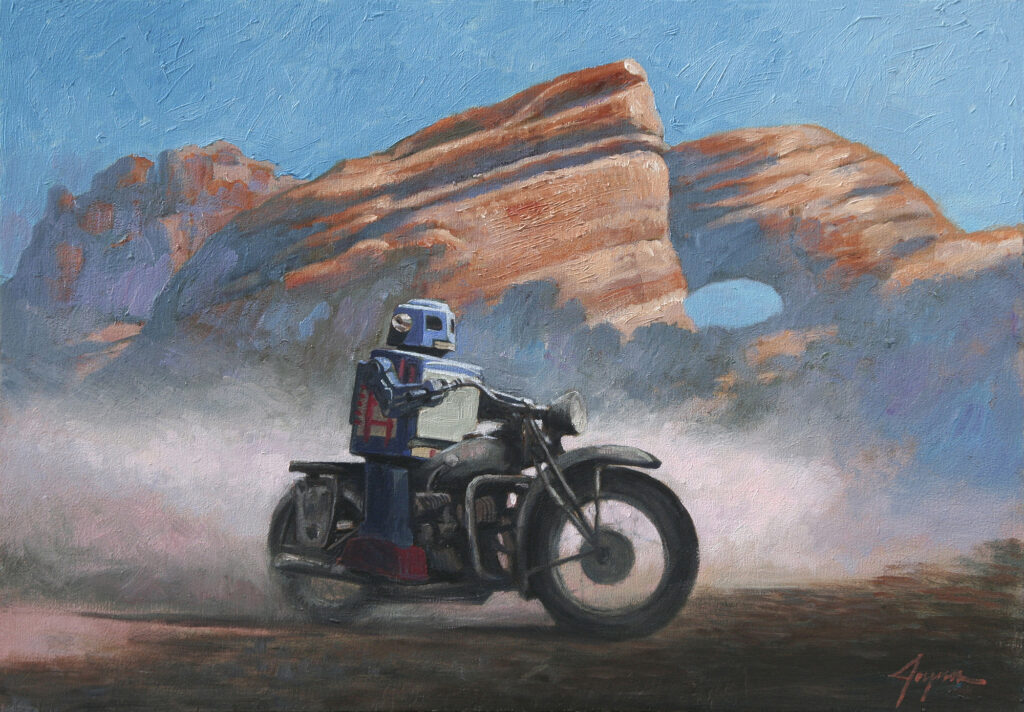 Also, when he was 9 when his brother returned from battle in the Vietnam war. The first thing he did when he returned was buy a Harley Davidson ‘chopper’ which he naturally thought was awesome. 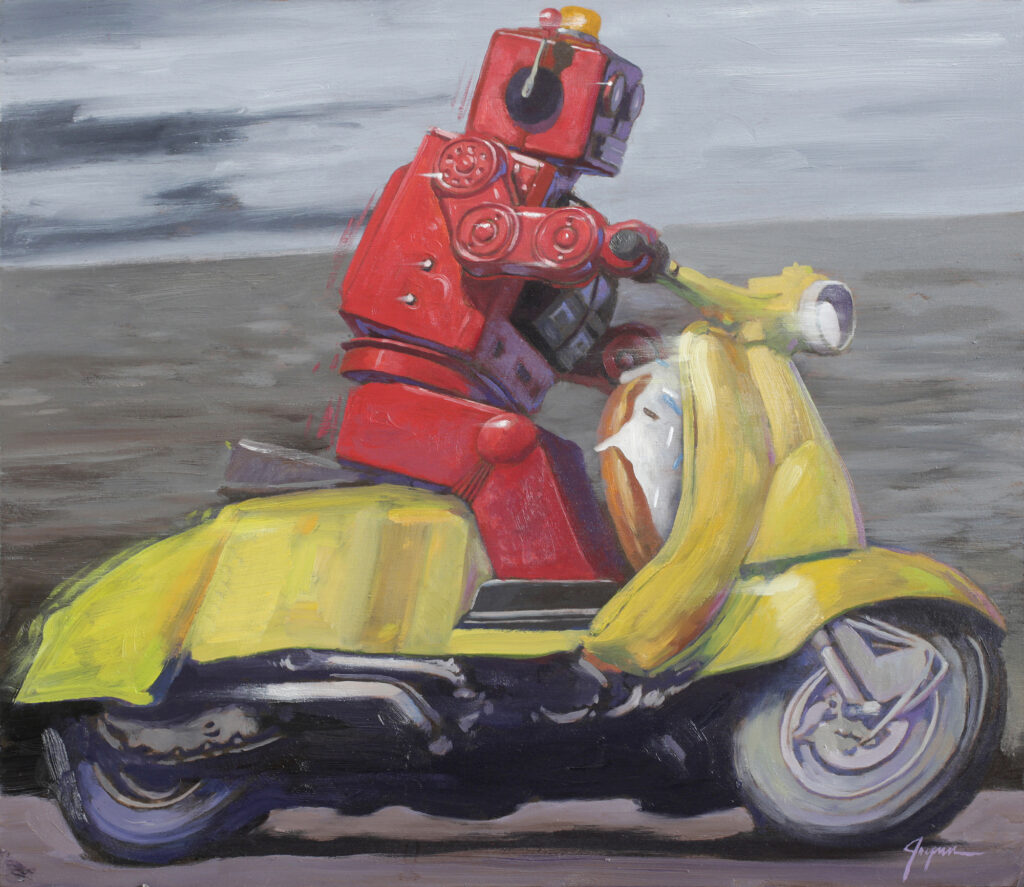 Eric had 3 brothers – all rode. The movie ‘EasyRider’ which he thought was thrilling – until the sad ending, of course. These things reinforced his desire for the perceived adventure that would naturally happen with a motorcycle. 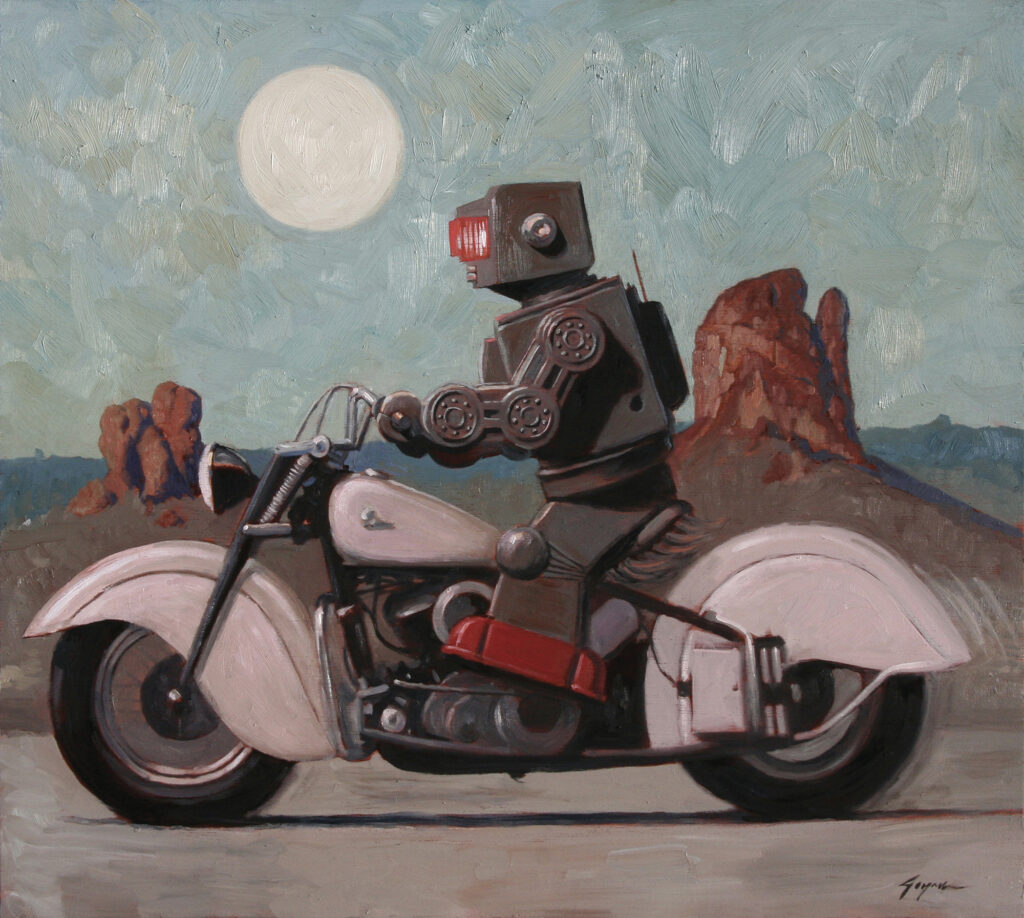 But his family was poor and Eric remembers that his brothers put his parents through hell, getting in trouble with the law and died before they should have.

He was the youngest, and felt sorry for his parents so when his mother asked him to never get a motorcycle, he obeyed. 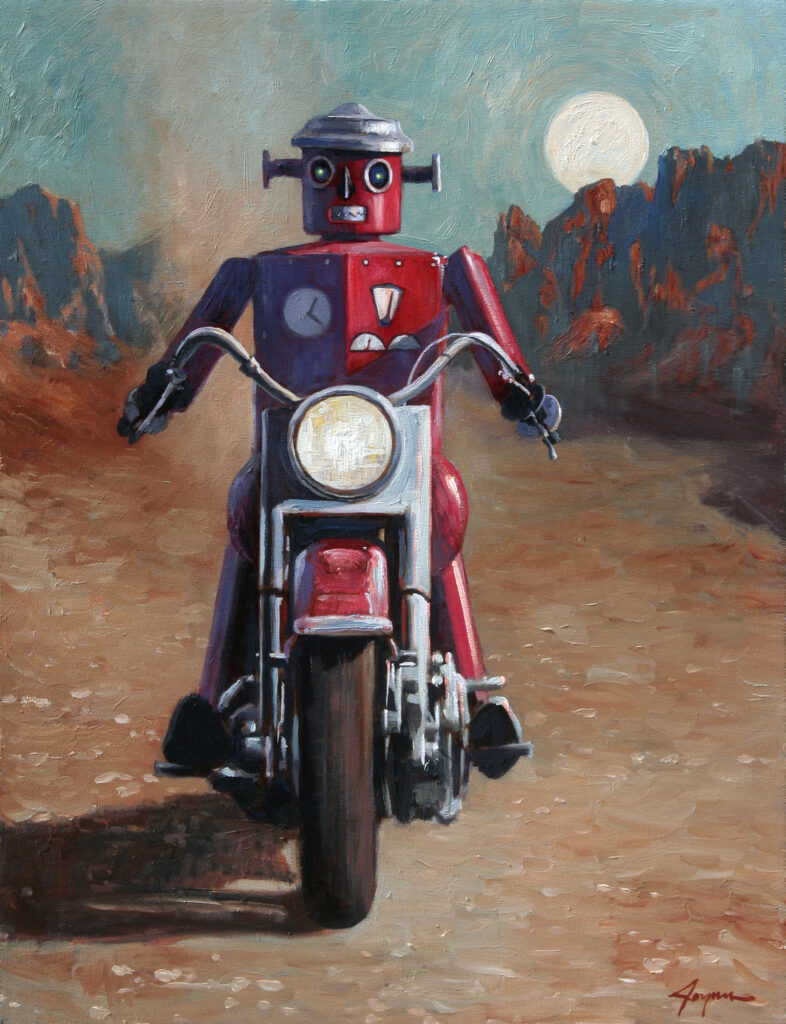 But the fantasy lives on in his head and art…recurring in paintings from time to time. If he retires to the countryside, he says that he will get a bike – or 2!

Eric is a tough guy, a hard worker, a nice person and great artist, his work really worth to be known. It will take you to an amazing colored ludic world. 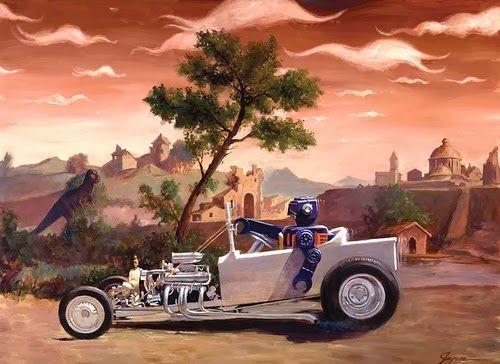 And last but not least, the art of Eric Joiner is financially accessible for many of us. You can enter in the Joyner’s world when you want … and you will discover that this is a wide world. Eric doesn’t limit his art to motorcycles, scooters or hot rods…

Have a look on his gallery:  Galleries for Gallery Artist Eric Joyner Painter of Robot and Donuts Artwork 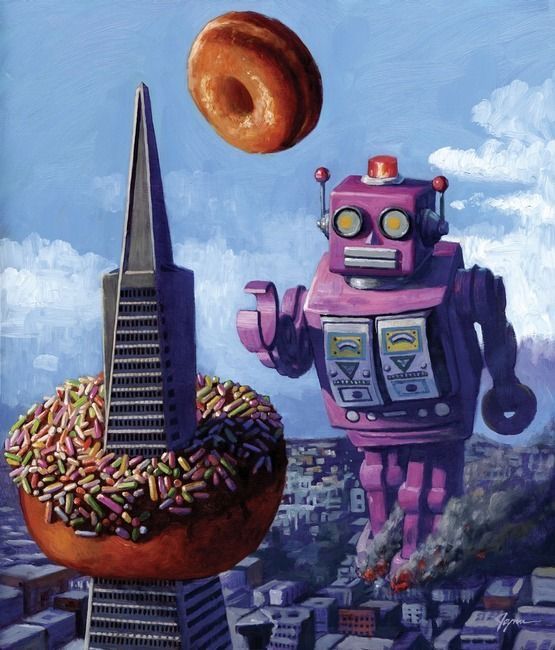 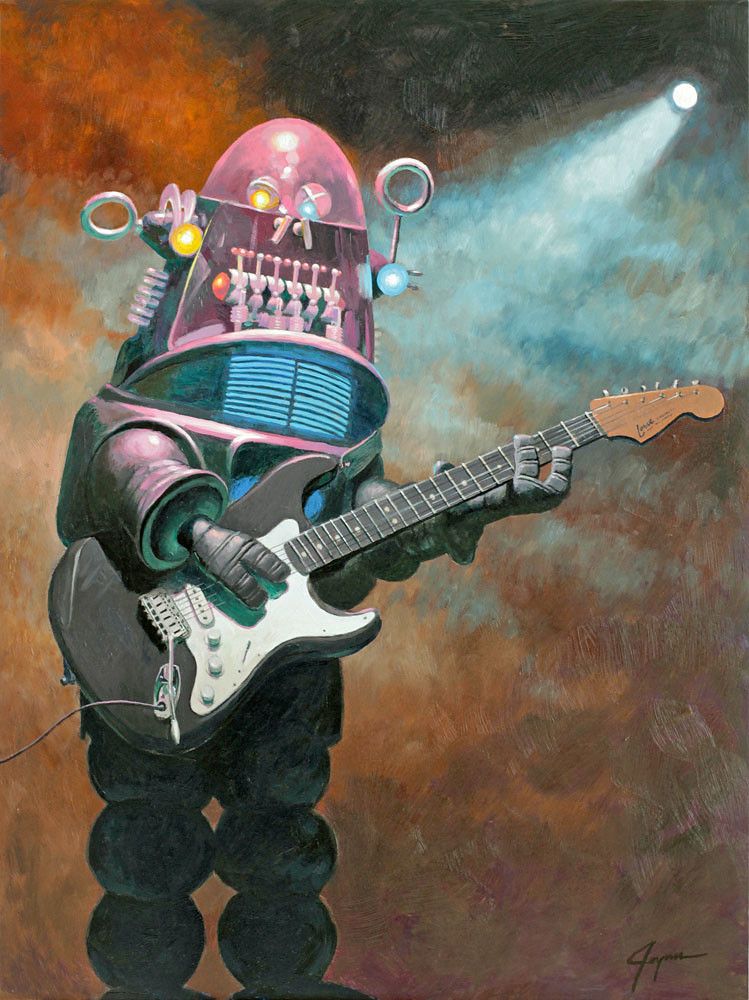