The Progressive International Motorcycle Show circus made its second stop in the capital city of California at the 350 acre Cal Expo facility located just East of downtown Sacramento. Motorcycle enthusiasts were treated to stunt shows, Supermoto racing, demo rides, the latest production motorcycles and the killer custom bikes from the J&P Cycles Ultimate Builder Custom Bike Show competition.
Shaun Ruddy of Chop deVille took People’s Choice Award for the second week in a row. Bell Helmet presented him with a Custom 500 lid for his award. 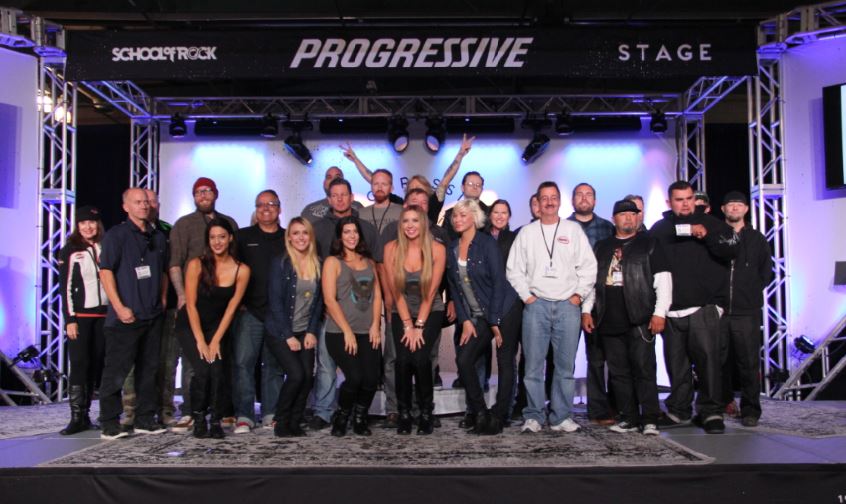 MODIFIED CUSTOM
Shaun Ruddy rolled down from his win in Portland, OR with his 2015 Indian Chieftain and sidecar and came away with another check for $750 in Sacramento. His Indian was a highlight for enthusiasts attending the show. This bike features a custom air intake, a chopped Liberty sidecar, stretched bags, custom paint, custom Chop deVille exhaust pipes and LED lighting.
1st #250 – Shaun Ruddy, Chop DeVille – 2015 Indian Chieftain
2nd # 625 – Darrell Schneider, 2013 KTM690 DUKE
Shaun received another award in Sacramento. Renowned artist, Makoto Endo, selected Shaun’s custom scout Café Racer for his motorcycle drawing. Endo paints a bike on a large canvas at the Progressive booth. And he only uses chopsticks.
MODIFIED RETRO
Some of the most interesting bikes in the series compete in the Modified Retro class. These are bikes that are older than 1984. And our Sacramento competition didn’t disappoint. Separated by just a point, #575 Kirk Taylor and #800 Paul Binford duked it out for the top position. When the final votes were tallied, Northern California custom bike builder Kirk Taylor came away with the win.
The bike is a 1980 Harley-Davidson set in a rigid chassis. It features an 80ci Shovelhead engine, custom tank with dual ridges and Taylor’s renown paint.
1st #575 – Kirk Taylor, Custom Design Studio – 1980 Shovelhead
2nd #800 – Paul Binford, Binford Custom Cycles –– 1975 Harley-Davidson FLH named 209 Special
Custom Bikes are popular with enthusiasts. The first bikes you see as you enter the convention center are from the J&P Cycles Ultimate Builder competition. They are placed on the red carpet and are positioned in front of the main entrance of the pavilion.
Throughout the 10 show series approximately 400,000 enthusiasts will see the custom bikes J&P Cycles Ultimate Builder competition. The total cash and prize package for the series is $100,000. The Chicago round will host the US Championship and will provide $50,000 in cash and awards. Sponsors include J&P Cycles, Harley-Davidson, Progressive Insurance, Bell Helmets, Speakeasy Original, The Leatherworks and 5 Ball Leathers.
MOD HARLEY
Andrew Ursich started out building custom hot rods. And during his spare time he decided to build a bike from a basket case Sporty. Andrew hand made the headlight bracket, then the fender struts, the inspection cover and the shift and brake linkages. Then his attention turned to making and modifying the sheet metal. He made the battery box, the ignition counsel, point cover, and modified the pipes from straight drags to upswept puppies. For his effort, he was awarded a check for $1,000.
1st #475 – Andrew Ursich – 1980 Sportster named Brass Monkey
2nd #675 – Ernest Cruz – 2012 Harley-Davidson Road Glide named Trouble 12
FREESTYLE
When Jon woke up on Friday, the day of the load in, someone had vandalized his trailer. They unscrewed the fasteners and bolts on his bike and relieved him of his tools. Fast forward to Sunday afternoon and he walks off the stage with a check of $2,000 and a much happier builder.
The bike features paint by Blair Peterson, S&S Shovelhead, open chain primary, split tanks and a custom girder frontend. His custom built boardtrack scoot rolls with 24” wheels front and back. Jon also walked away with a Speakeasy Originals’ ring entitled Made in America.
1st #275 – Jon Macdowell of Bonneville Customs, 2014 Custom Boardtrack
2nd #300 – Mark Shell of Bonneville Customs, 2007 Anarchy Disruptor
Next up is Long Beach. Some of the greatest custom bike builders in America roll into the friendly confines of the Long Beach Convention Center – Reserve the weekend of November 20-22, 2015: http://www.motorcycleshows.com/long-beach 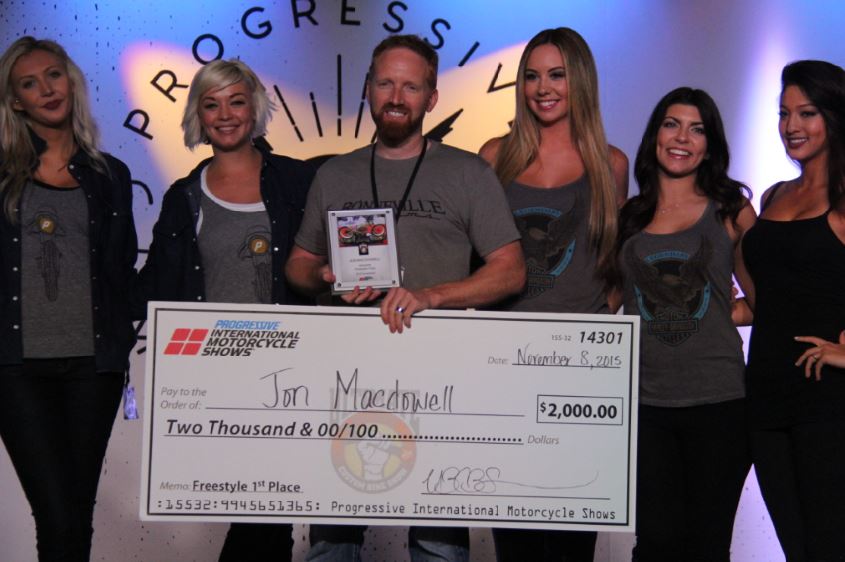 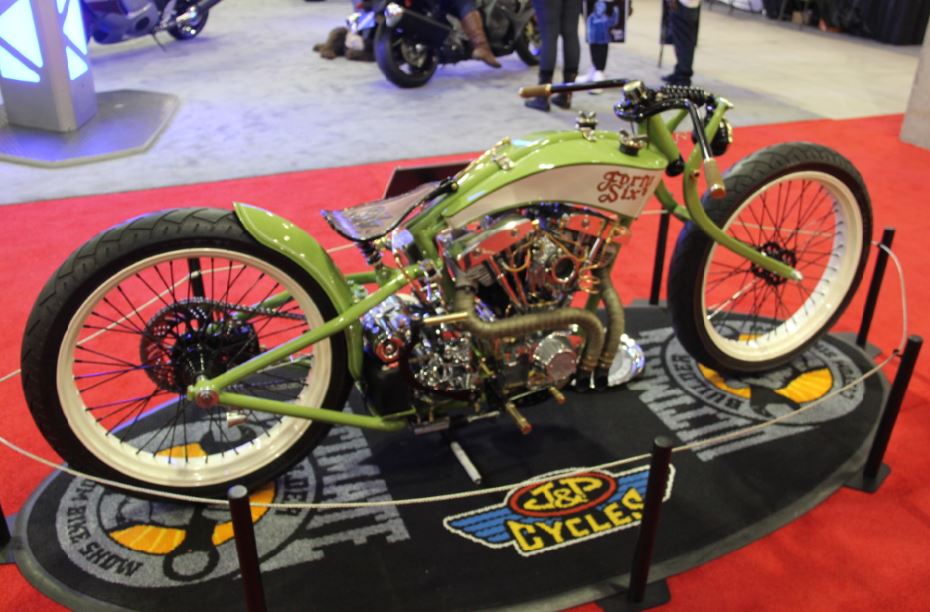 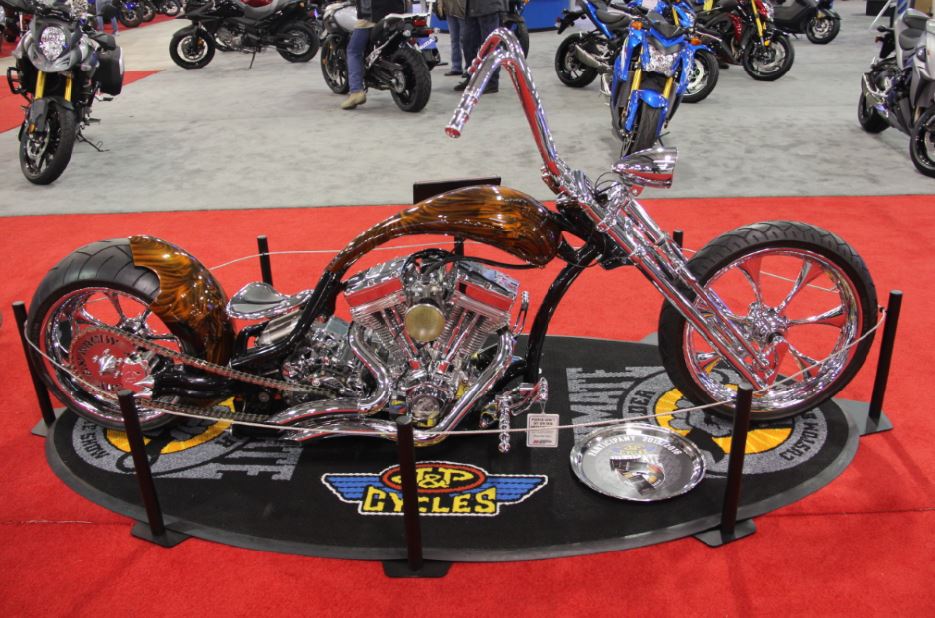 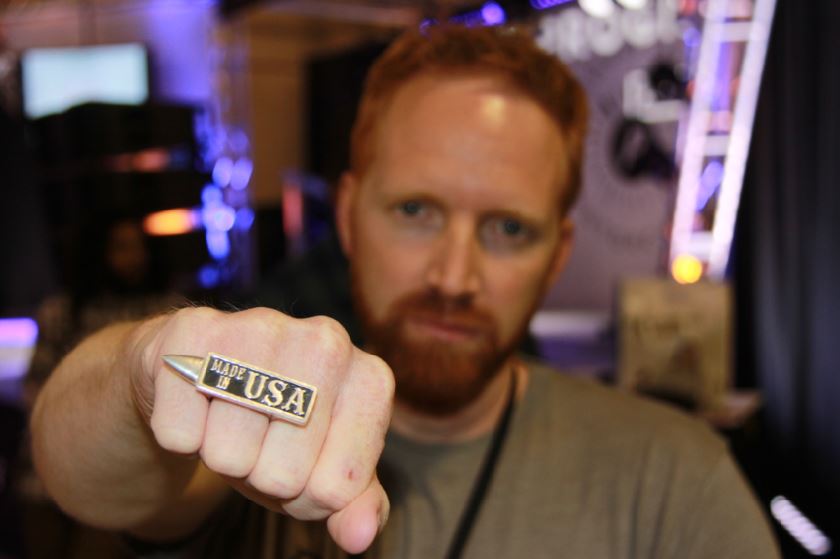 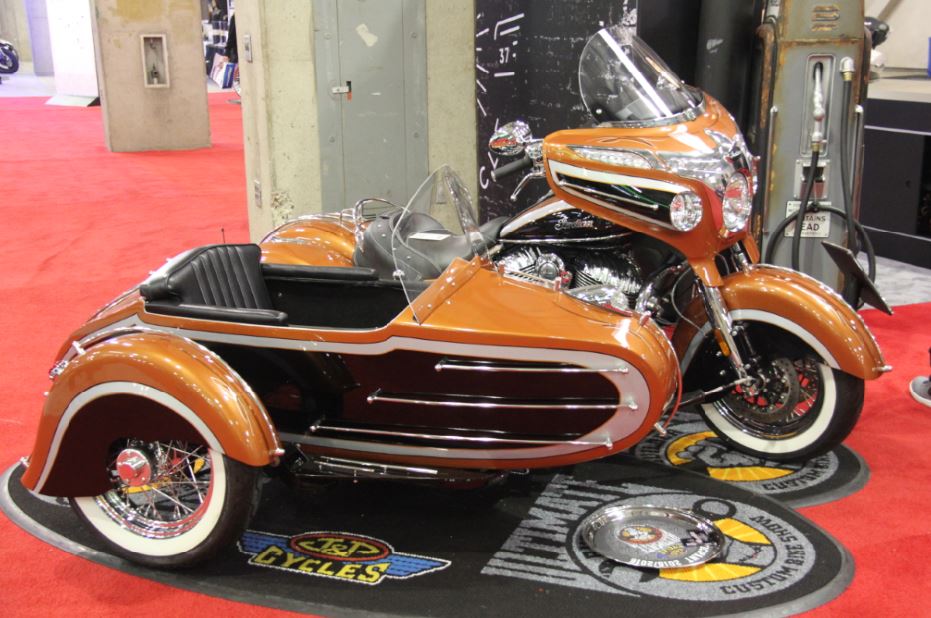 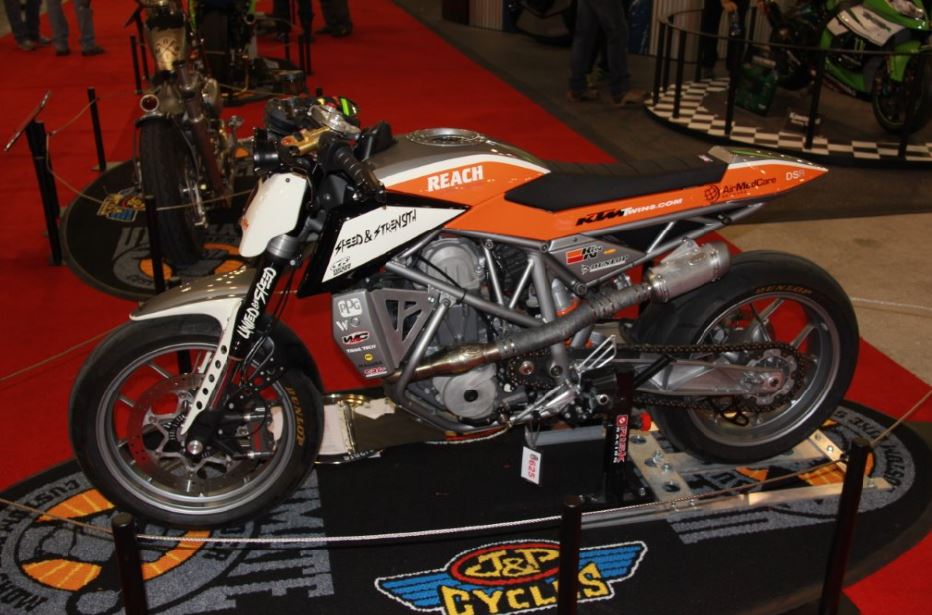 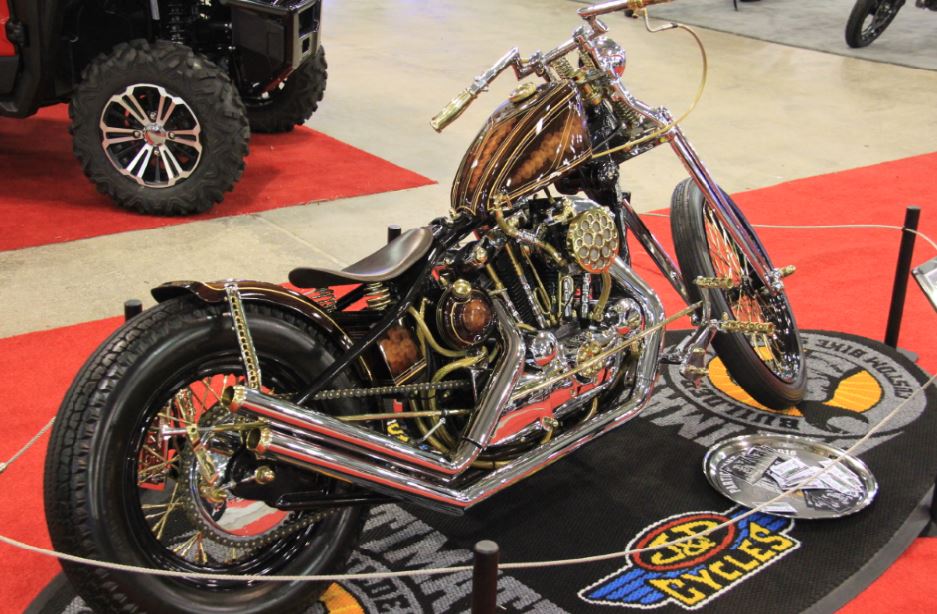 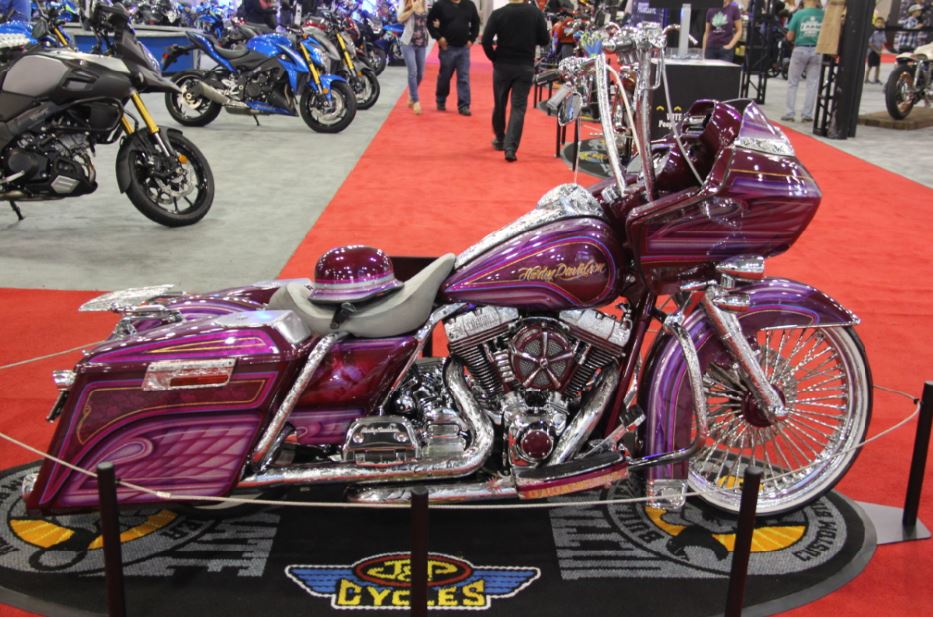 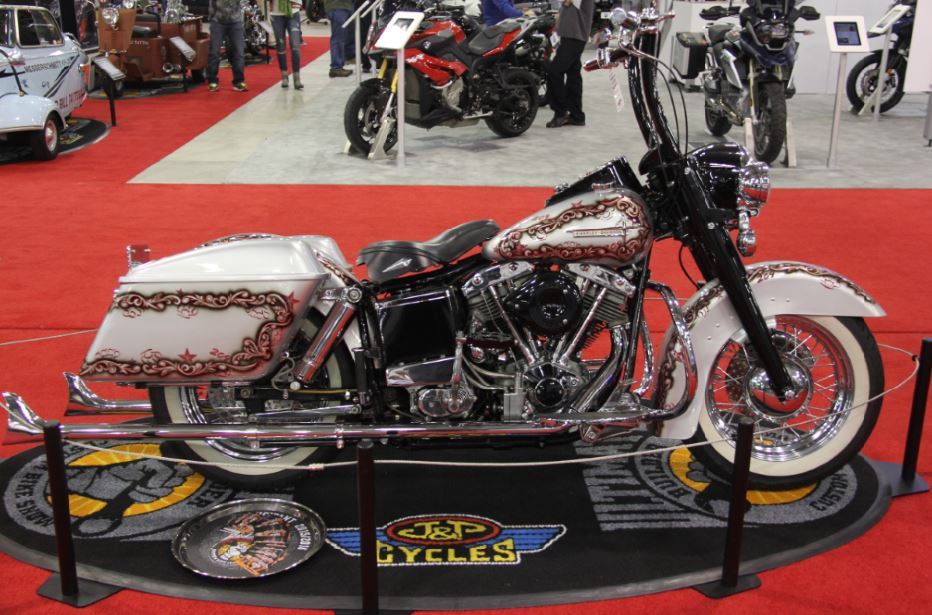 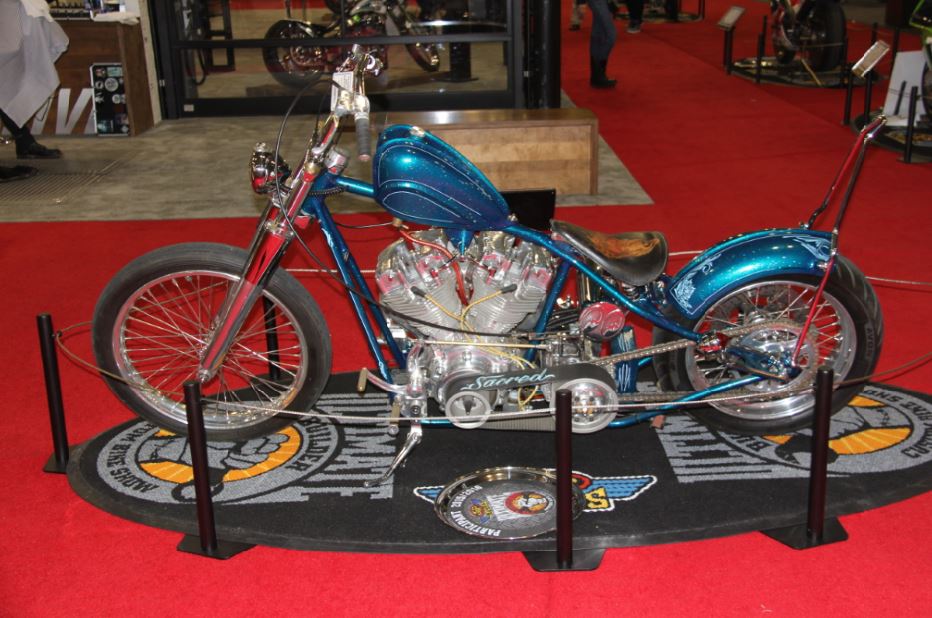 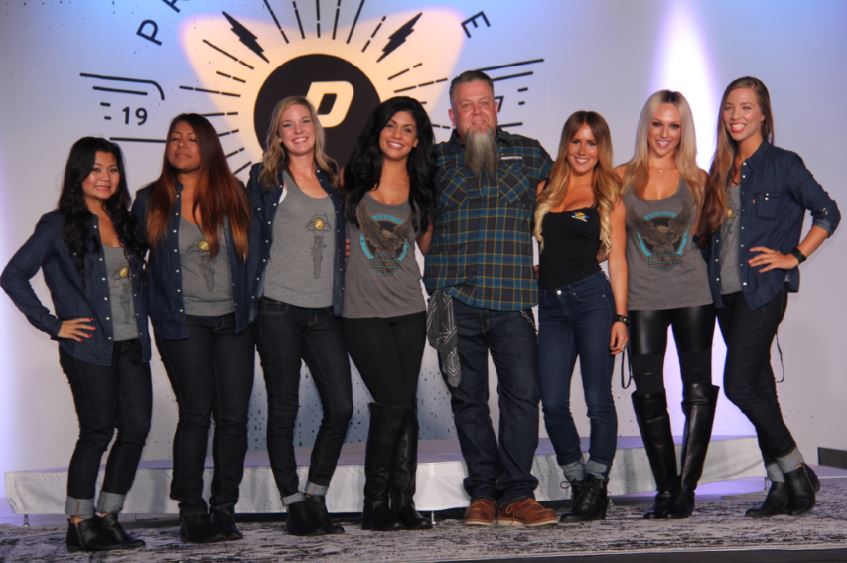 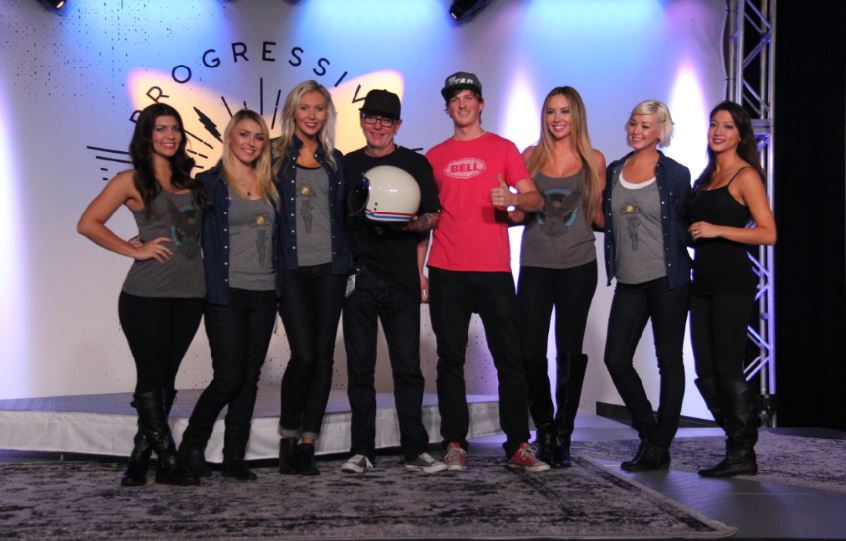