Skip to content
Deadwood SD – May 17, 2022 – Bikernet.com, the brainchild of publisher, writer and freedom fighter Keith Ball, appeared at #25 in Feedspot’s list of the 100 top motorcycle blogs and websites earlier this year.
The Bikernet Blog, which celebrated its 25th anniversary last year, was one of the first sites to focus on the custom motorcycle market. It now includes not only custom bikes of all brands, but also technical material, travel information, legislative updates and commentary on issues of importance to motorcycle riders. Bikernet’s editorial approach is to provide the perfect mix of motorcycle hardware and culture, along with imagery that captures the artistry of custom and performance motorcycles and the people who ride them. 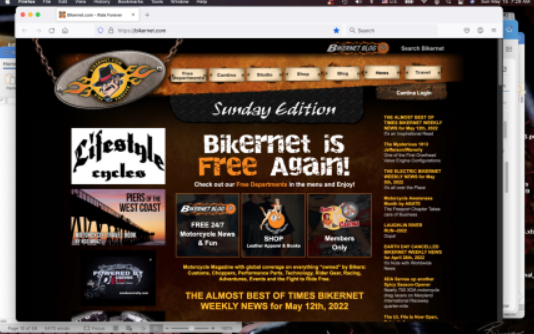 “Bikernet has consistently been ranked in the Top 30 sites on the Feedspot list, and this year we’ve made it to #25 in the rankings, consistently ahead of many well-known titles,” said Ball.  “We don’t care if we’re considered relevant or not. We just do and publish what we love, and hope to ride free till the end.”
Ball’s background is as varied as the site. He’s a Viet Nam-era Navy veteran who served as an electronics technician on a heavy cruiser, then, upon his return to civilian life, he was a staffer and editor at a host of motorcycling and automotive titles.  He eventually became Executive VP for Paisano Publications. His understanding of motorcycles and the motorcycling culture helped him develop and lead publications like Easyriders and In The Wind, which became the top newsstand titles in the industry, along with Hot Bike, Hot Rod Bikes, Quick Throttle, American Rider, Street Chopper and several other titles.
Ball’s non-editorial resume is just as lengthy. He drove the founding and growth of motorcycle rights organization ABATE and was appointed as National Director of the organization. His motorcycling experience has made him a draw for top TV shows including roles as a team member in Monster Garage and as a judge on American Chopper. ABC News interviewed Ball for newsmagazine show 20/20. His racing resume includes being part of four successful motorcycle land speed record attempts and his honors include induction into the Sturgis Museum’s Hall of Fame (2006), Las Vegas Motorcycle Hall of Fame (2016), the Motorcycle Riders Foundation Hall of Fame (2018) and the Cycle Source Man of the Year (2006).
“Breaking into the Top 25 is a great honor for our site,” Ball continued. “But our mission won’t change. We’ll continue to provide a great mix of bikes, racing news, tech and opinion pieces to entertain people who love building and riding custom bikes.”
ABOUT BIKERNET BLOG
Bikernet.com is a top-rated website that delivers content to motorcycle riders and fans of the motorcycling experience. Established in 1996, Bikernet is consistently ranked in Feedspot’s Top 30 worldwide motorcycle web sites and blogs, with monthly rankings as high as #25.
Tags: bikernet keith ball motorcycle NEWS website