Indian Motorcycle has launched the newest version of one of motorcycling’s most famous and coveted bikes, the Indian Scout. The new Indian Scout was unveiled to a gathering of press, VIPs and celebrities at the 2014 Sturgis Motorcycle Rally last night. This is the first truly new Indian Scout in more than 70 years and marks the return of the legendary bikes that conquered the infamous “Wall of Death” and carried the legendary “Indian Wrecking Crew” motorcycle race team to multiple victories. A 1920 Indian Scout earned the title of the “World’s Fastest Indian” as proven by Burt Munro in 1967.

The 2015 Indian Scout weighs in at 558 pounds, the lightest middle-weight cruiser in its class. Boasting advanced technologies, design and engineering innovations, it offers a breakthrough chassis design featuring a lightweight and rigid cast aluminum frame, a low 25.3-inch seat height, and is powered by an all-new and proprietary liquid-cooled, 69 cubic inch, 100 HP V-twin engine.

“Over the course of 30 years of countless innovations, racing wins, world records and industry firsts, the Scout has earned its reputation as a versatile, multifaceted bike that appeals to just about every rider and every riding style, with superior handling, balance, performance and craftsmanship,” said Steve Menneto, VP of Motorcycles for Polaris Industries. “Our designers and engineers have taken that heritage and those characteristics and fused it into the 2015 Indian Scout, and we think just about everyone who rides this incredible bike is going to feel like it was built just for them.”

The new Scout was designed from the ground up and offers:
*The look of a classic “rigid triangle” design that is synonymous with original Scouts, coupled with a set of premium coil over monotube rear shocks that deliver exceptional ride, handling and comfort
*A 25.3 inch seat height, 61.5 inch wheelbase and 5.3 inch ground clearance, delivering a confidence-inspiring 31 degrees of lean angle and low center of gravity, along with exceptional high and low speed maneuverability
*A premium, genuine tan leather solo bucket seat, making the 2015 Indian Scout pure Indian and the only brand to offer this seating as standard
*An all-new, in-house designed and proprietary liquid-cooled 100 HP 69 ci V-twin engine that combines all the design, power and reliability elements that made the original Scouts.
*A forward classic engine design cues with purposeful styling that honors both form and function
*Closed loop fuel injection and drive-by-wire throttle actuation mated to a 6-speed overdrive transmission for peak torque of 72 ft./lbs. of torque at 5900 RPM

The 2015 Indian Scout is available in Thunder Black, Indian Motorcycle Red, Silver Smoke (matte finish) and Thunder Black Smoke (matte finish) with a MSRP starting at $10,999. Orders are being taken now with expected delivery in dealerships across North American in late 2014. You can pre-order and learn more and learn more at www.IndianMotorcycle.com . 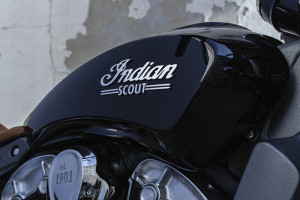 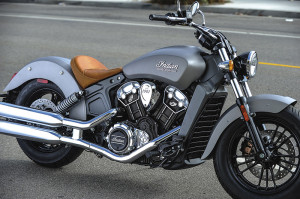