In 1976 I bought my first motorcycle and on that day I knew exactly NO other women who rode.  I hadn’t even seen another woman on a motorcycle.  So, for the first few years I only rode with my husband and his friends, “the guys.”  Eventually I heard a rumor about a friend of a friend whose wife rode her own bike.  I began to feel we were like 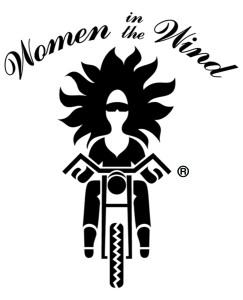 Bigfoot, seen but never proven.  Somehow I just knew they were out there and in 1979 I placed an ad in the local newspaper looking for women riders to join me for an all lady ride.  I received almost a dozen calls from women who indeed were real and the first ride was magical.
Fast forward to 2014 and the organization I started from that first ride, Women in the Wind, was celebrating our 35th anniversary.  Over those years we have grown to over 100 chapters in at least 25 states with 16 chapters in Canada and chapters in Both England and Australia. 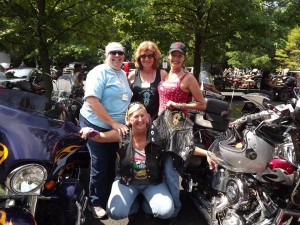 While growth in the organization was slow in the beginning it boomed after the internet made it possible for women riders to search for others with the same interest.  In the 90’s women didn’t think twice about moving up to the front seat and the numbers were gaining so fast that it was then that motorcycle manufacturers and apparel companies ramped up their focus on the lady rider.  As the popularity of the woman rider grew so did Women in the Wind.
Our 35th anniversary celebration was held in my hometown of Toledo, Ohio and like Mecca, women gathered from all corners of the country on two wheels.  The party started the first Thursday in August with a hog roast but in my opinion the highlight was Saturday morning when we had a police led group ride up the Maumee River.  One of the husbands counted over 240 bikes leaving the parking lot to a catered lunch alongside the banks near Grand Rapids.    The only all women ride I participated in that was larger was during the Harley-Davidson 100th in Milwaukee in 2003.  But these were my girls and I couldn’t have been more proud to see their smiling faces and the looks from people who had realized that the group passing on motorcycles were all women!
After the riding and parking lot games we put the kick stands down and did the official celebrating.  Our theme for the banquet was: There’s No Place Like Home. So, the rest of the evening was filled with munchkins, witches and lions.  We had a yellow brick road leading to the banquet room and even a photo booth to snap the memories. 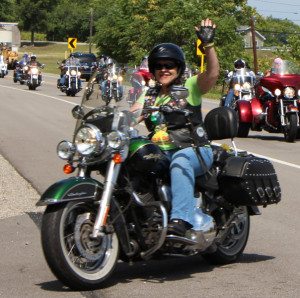 I’m still curious as to how some of the women packed and carried their costumes across country on their bikes.  We often have a theme at our national meetings but none have been more fun than the Wizard of Oz.
WITW holds two international meetings each year.  One in the winter and one in the summer.  This winter we will be trying something very different as our group meets on a cruise ship sailing out of Ft. Lauderdale.  Then next summer we will be gathering in Lake George, NY.  Since this area is already biker friendly and a destination for riders, I don’t think they will have any problems with us.
I don’t know if WITW will make it another 35 years but I do know that the first 35 were a blast.  It took me from not knowing a single lady rider to now knowing a couple thousand.  How’s that for progress?