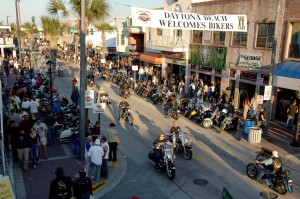 MILWAUKEE (March 6, 2015) – Harley-Davidson Motor Company is ready to roll into the 74th Annual Daytona Bike Week as the official motorcycle of the rally. All activities are from 9 a.m.-5 p.m. daily, March 7-14, at the Daytona International Speedway. The Speedway also serves as the only place to see the 2015 motorcycle line-up, and participate in product riding demos that include the Harley-Davidson® Road Glide®, Harley-Davidson® Ultra Limited Low, Harley-Davidson® Street®, Harley-Davidson® Freewheeler™ and 16 customized models. A special reveal of the 2015 CVO™ Street Glide® in the new Carbon Crystal with Phantom Flames paint is planned, and there will demos of some of the latest General Merchandise products.

“Every year we seem to forget just how long winter can be for us in Milwaukee and throughout the U.S,” said Kris Schoonover, Manager, U.S. H.O.G and Events. “Daytona Bike Week marks the start of the riding season, and we can’t wait to join everyone to celebrate hitting the road.”

Harley-Davidson’s Speedway location is also where official Willie G. and H.O.G.® merchandise can be purchased, and it will be the only H.O.G. pin stop at the rally. Other Harley-Davidson activities planned include the MDA Women’s Ride on March 10, an H-D customization motorcycle showcase on March 11 and daily police skills shows. A special H.O.G. Rally Point area, and  H-D Road House Custom™ Meats sampling, will be available for H.O.G. members and one guest 11:30 a.m.-1 p.m. every day. For more information about Harley-Davidson Daytona Bike Week events, visit h-d.com/Daytona.