We all like a story about a builder with no formal training who knocks it out of the park on their first shot, but down here on earth, those stories are as rare as a dry Ironhead rocker box. The fact is, there’s no magic formula for building a great bike, and the only certain way to succeed is to work for it until you do. 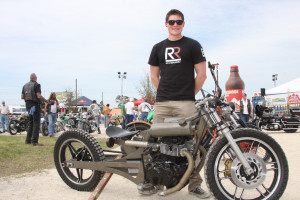 That was the path Joey Chanel took when he began building this radical Honda-based chop. Inspired to take a creative approach when tasked with completing a senior year design project for his fine arts degree at George Mason University, he eventually convinced the staff that a chopper can be art, too. Hey, we already knew that, but word spreads slowly sometimes. 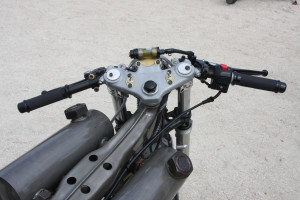 Starting with a dirt-cheap ’79 Honda CM400, there were hurdles to overcome right out of the gate. Joey had plenty of welding experience, but the resources at his school didn’t include a tubing bender. Working on a budget too tight to allow flagrant spending on pre-bent steel or a one-off frame built by someone else, Joey tackled the problem from another direction…or should we say dimension? Abandoning the preconceived notion that motorcycle frames have to be made from round tubing, he designed and fabricated the entire tail section out of flat 1/8″ sheet steel. “It’s 26 individual pieces, cut and shaped by hand,” Joey points out.

This radical section was mated to what was left of the front of the bike, where more cool touches can be found. The front is suspended on later-model CB650 forks, shortened to bring the geometry in line and capped with clip on bars, a trick brake master made from a glass fuel filter, and an LED headlight housed in what used to be a scuba tank pressure nut! 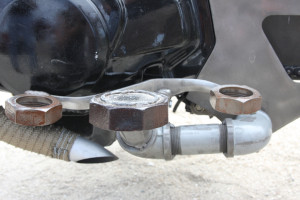 Joey had a friend chip in with a bucket of good quality steel – in the form of pipe fittings and union joints! The free material ended up wrapping the bike together, visually. The kick pedal, pegs, heel/toe shifter, tail light housings – they all use the union fittings as their raw material, and were carefully worked into functional, artful pieces by Joey. Even the unique twin tanks are secured via these union joints. “My dad was joking that I wouldn’t know how much gas I had in the tanks, but I told him I could just unscrew them and carry them down the road if I ran out,” Joey laughs. 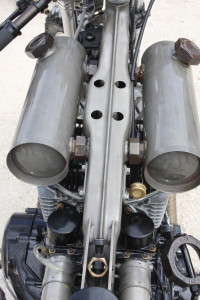 He even worked in another craft that he loves, woodworking. “I was tired of propping the bike up with a broom stick, so I finally shaped a piece of black oak for a kickstand. It’s hinged to fold neatly against the frame, and has neodymium magnets to keep it in place,” he says.

That’s some serious blending of hard work and craft. After finishing the bike earlier this year, he met Copper Mike of Gravesend Cycles, who agreed to help get Joey’s bike down to Daytona bike week where he made an impressive appearance at several shows. He even scored the “Best Creative Custom” award at the legendary Willies Tropical Tattoo show, putting everyone on alert: this young man has talent, drive, and ambition. If he can turn heads like this with a $300 Honda, we can’t wait to see what he comes up with next.