UPDATE ON THE GREY GHOST

An enthusiastic grassroots team with solid street cred!
Jimbo Fischer checked in with results from the Gray Ghost’s latest foray at Loring in Maine:
http://www.loringtiming.com/
All the volunteers are great and looking out for our best interest – going fast, & stopping safe.
Taking home the S&S Challenge hat for fastest naturally aspirated V – Twin of the meet.
We did a 186.744 mph. and the Ghost wasn’t quite feeling his best this week, ecm hick-ups.
We’ll have him feeling better for the AMA Bonneville salt flats Mcy. speed trials next month.
More as it happens.
Jim”Jimbo”Fischer
the Gray Ghost II Project 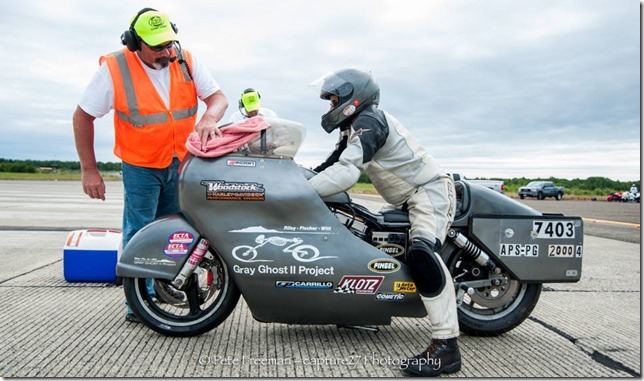 As you all know for several years we at Iron Trader News, and previously at the now defunct IronWorks Magazine, have been following the exploits of the Gray Ghost II Project which consists of Warner Riley, Jimbo Fischer, & Mike Witt. We’d like to pass along this synopsis of the season that they have provided us. If you want to get to see and feel what its like to ride with your tail on fire watch the accompanying videos:

After an almost punishing 2013 LSR season for our new 100 Cu. In. S&S Superstock Sportster engine, the decision was made to “freshin up” the engine with a complete inspection and update on some parts. This meant – Road trips – Best of which is going to the S&S Ranch in Viola Wisc. A must visit for any motorcycle performance enthusiast. A walk through the S&S Museum is like a walk through time. This time, freshin up took on a whole new concept for us. I mean we’re talking S&S Proven Performance type freshin up – Nobody does it better. After several trips the engine and parts are back home in the garage for final assembly. Time to get ready for the LTA Maine Event in Loring Maine – www.loringtiming.com/
Here is a link to the LTA Event Runs http://youtu.be/M1B4OD4XEYU

The LTA event will be our first time out sporting a fairing and we’ll be entering the Partial Streamline class. Jimbo picked up replica parts to the Cal Rayborn XR 750 1968 Daytona fairing and got down to some fiberglass body work to adapt it to our stretched frame. I worked in a fiberglass shop back in the late 60’s, but it’s been awhile, and I had fun getting into it again.
Everything back together in time – get pre registered, get hotel reservations done, get truck & trailer servicing done, we’re ready for LTA. This track is being called the premier Land Speed Venue east of the Bonneville Salt Flats, and after attending a couple years now I can see how it will fill those shoes. An historical site with a great friendly staff of Volunteers and a Board that really knows how to keep things rolling, with one of the best rookie track orientations a racer could ask for. Good food track side, and in town – this is up state Maine – can you say Lobstah ?
What a great track. You get a time slip for the standing start 1 mi. as well as the 1- 1/2 mile – Records are kept separate for both. What makes it extra special for most is that extra 1/2 mile of W F O – So here’s the story –

First day out was a bit breezy for my first speed run with a fairing, and the education wasted no time in coming with a diagonal cross wind that was the beginning of school. I mean you just gotta love it.
The next day gave us near perfect conditions and here is what happened. We established records in the APS-PG 1650 class with 177.194 in the mile & 184.096 in the mile & half. In the APS-PF class we set records at 177.985 in the mile & 185.119 in the mile & half. Our newly freshened up S&S Superstock engine was just singing. The trip and event was a bit of a tough pull for Warner & Babs at times & they toughed it out and still had fun.

With minimal time left to the event Warner, Babs & I had a pow-wow and decided to go after the existing A-PG 1650 class record. I mean we came here to dance, not sit on the bench. The fairing was removed, gearing changed to accommodate the extra aero drag now. The numbers we had to beat were 171.264 in the mile & 171.165 in the mile & half. After a couple days now on this incredible track, Jimbo is on his game and the Ghost is singing. We bumped those records up to a 174.623 for the mile & a 177.945 for the mile & half. I mean our S&S 100 Cu. In. Superstock Sportster based engine was singing at 7 K+ rpm like – I am so happy I am walking on sun shine. OK, what kind of shine Jimbo ?

OK – Ok – no time to waste. Get back home a get ready for the Big Enchilada, the Mecca of Land Speed Racing – The Bonneville Salt Flats in Utah.
After the learning curve at LTA the decision was made to use a different fuel additive for our fuel class endeavor. Sorry, can’t tell ya what additives & what ratios unless I can get a sponsorship from them, then I tell you everything about it. The point was – this S&S EFI & ECM system has proven to easily handle the changes with just a little change in the ECM map. Dyno Mike will testify to this. Incredible, I know. I mean I come from the generation of rotary dial telephones. You either memorized your friends phone numbers or had them in a little black book in your pocket.

The 2014 Bonneville Motorcycle Speed Trials were pulled off under some of the most extreme conditions imaginable. I call it the 2014 Slush Fest.
The pits were just that – But – the BMST volunteers had two tracks on higher ground/salt, and had them groomed very nice. Big Kudos to all the BUB Volunteers who returned this year. Rex & Tom in the tower, you guys rock. So after a couple of hair on the back of your neck standing up, maybe even a fresh pair of shorts runs we clocked a good record run. A 185.57 qualifying down run & a 189.336 return run for a new record in the APS-PF 1650 class of 187.45 After nine years going to Bonneville, I have to say this year was the most challenging.
Some good action & helmet cam here to give you a taste of the Bonneville Salt Flats http://youtu.be/lsSYkB7J80w

Ok, no sniveling allowed – time to get ready for the season final event at the East Coast Timing Assoc. Ohio Mile www.ecta-lsr.com

The September ECTA event in Wilmington Ohio offers the Annual Street Bike Shoot Out & more. If you like cool really fast cars & some of the fastest bikes in the country here is a spot that is really spectator friendly. You can walk the pit or sit track side for an up close view of the action. In fact so many cool street rods & customs come to spectate and that turns out to be a show in itself. OK – Ok – get down to business. The Gray Ghost & I are totally in sync now. He’s talkin to me & I am liking it and talkin back – If I have to explain you’ll either understand or think I fell off the wagon.
We worked awfully hard preparing for this race season, & so far its has been paying off. The records we were going to challenge were APS-PF 1650 at 167.529 and APS-PG 1650 at 181.320 – We finished our 2014 season toping those records with a 186.412 in the APS-PF 1650 and a 186.877 for the APS-PG 1650 class.
Now on YouTube you can check out some helmet cam video – puts you in the drivers seat.
http://youtu.be/owStxjnkaVc

A spectacular season for the Gray Ghost II Team ended with eight new land speed records spread out from the Bonneville Salt Flats in Utah to the LTA Maine event in the north lands of Maine.