As a life-long east-of-the-Mississippi resident, I’ve harbored persistent romantic notions of the American West’s proverbial wide-open spaces. Annual treks to the Black Hills have assuaged some of the longing to soak up the Wild West aura, but a recent opportunity to visit the southwest—specifically New Mexico—rekindled my wanderlust for those storied places. It also proved to be an opportunity to explore the region in search of ITN Overnighter resources.

The Southwest’s Four Corners area, incorporating Utah, Colorado, Arizona and New Mexico, offers a wide-range of landscape that includes roller coaster mountain roads, towering rock formations, and long, lonely stretches of open road. History and geology collide along the way, taking in a diverse eco-system and multi-cultural influence that has been a part of the area since before the first European explorers “discovered” it hundreds of years ago. It’s a symphony of colors, too, highlighted by audaciously blue skies against the stark elegance of rust, amber and steel-shaded mountains of a scale and size many east-coasters like myself simply can’t fathom. You could spend weeks, even months, exploring what this area offers but we’ve only got two days to complete this Overnighter, so some focus is required.

A good starting point is Albuquerque, New Mexico, a city situated between the Sandia Mountains and the Rio Grande River, a region that has appropriate ties to Historic Route 66. With its high-desert climate plus history and culture to spare, you could easily spend a few days right here. One suggested stop: take Unser Blvd. (named for the famous racing family that, thanks to Al Sr., Al Jr. and Bobby, lays claim to more Indianapolis 500 victories than any other clan) just off I-40 east to Petroglyph National Monument. If you climb the Boca Negra trail to the top of the mesa, you’ll be rewarded with a dramatic view of the city. The 20,000 ancient stone drawings along the way are cool, too.

But my goal was the famed Turquoise Trail, otherwise known as NM Route 14, a National Scenic Byway that runs 62 miles from Tijeras. You can pick it up 16 miles east of Albuquerque, and it ends in Santa Fe. Along the way you’ll take in some of the best scenic miles you could ever experience on your Hog. If ghost towns, endless vistas, ancient Native American ruins, and canyon carving push your button, this is the place to ride.

Leaving Tijeras you quickly come to the town of Sandia Park where a worthy detour on the scenic Sandia Crest Highway leads to Sandia Peak Ski Area, Cibola National Forest and Sandia Crest, the highest point along the Trail at an elevation of 10,678 feet. Don’t miss the view from the observation deck and if you have time the Sandia Mountain Wilderness has well-marked trails that lead through aspen glades and wild-flower meadows. There’s also a chairlift ride at the ski resort and a scenic tram, so if you want to let your bike’s engine cool down, now’s the time. 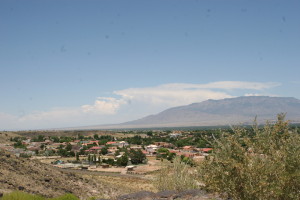 Heading north, you’ll pass the gold rush ghost town of Golden and you’ll want to stop in the historic coal-mining town of Madrid (pronounced MAD-rid), where much of the movie Wild Hogs was filmed. It’s a biker-friendly hamlet that benefited from some spiffing up by the Disney location crew during the film shoot. Stop by Johnsen & Swan Leather Company and say hi to Judy Swan who penned the article on the film for IW a year or so ago, and who also took some of the photos for this article.

Ride through Los Cerrillos, where turquoise was mined as early as 900 A.D. then as you get into Santa Fe, the traffic picks up a bit and the Turquoise Trail ends, joining up with 285/84. Santa Fe simply screams Old West authenticity and refinement and it would be easy to stop here for the night to stroll through shops and art galleries or to enjoy a fine dinner. It’s a simple matter to loop back to Albuquerque from this point for a quick Overnighter.

But to extend the trip, take Highway 285/84 further north and detour west before you reach Espanola, taking 502 into the town of Los Alamos. Depending on your security clearance you could try to visit the Los Alamos National Laboratory, the U.S. national security center. My name isn’t on the “cleared” list so I had to settle for the Bradbury Science Museum in downtown—a better option for all concerned, really. But if it’s genuine mystery and intrigue you’re after, visit the archeological sites at Bandelier National Monument, once home to Ancestral Pueblo people. It’s just a few miles south of town.

Back on 285/84 going north, it might be easy to miss, but don’t just pass through the tiny town of Abiquiu along Highway 84, about 15 miles after the two roads split near Hernandez. Just a few miles north of where highway 96 branches off, is the Ghost Ranch where artist Georgia O’Keefe lived and painted, now a 21,000-acre education and retreat center. The grounds and hiking trails are open to visitors and even a short stop reveals why O’Keefe was so enamored of, and inspired by, the place. If you decide to stop for the night, the Abiquiu Inn in town has comfortable rooms for rent and several cozy casitas with full kitchens and fireplaces, plus a refined restaurant with some surprising offerings. 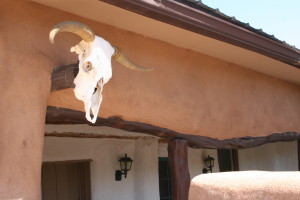 From Abiquiu, follow 96 east to 550 south, a road that skirts around the Santa Fe National Forest and Native American lands, before linking up again with I-25 near Albuquerque. There’s an intriguing legend in these parts, near the town Jemez Springs, that notorious gangster Al Capone, old Scarface himself, holed up at a ranch here in the late 1920s.

The stealthy but vibrant life of the high desert, combined with the endlessly varied shades of earth and sky, make it easy to see why artists, among others, have drawn such inspiration from this landscape and its inhabitants. Albuquerque is within a day’s ride of El Paso, Amarillo, or Flagstaff along interstate highways, so this part of the country is close to several populated areas. Denver and Colorado Springs are a bit further, but again, it’s a straight shot on the superslab. No matter where you come from, though, once you get to this Overnighter, you’ll leave the frenzy behind for a relaxing step—or dare I say, ride?—into the past. Sometimes, it seems, the road less traveled leads to some well-worn paths. 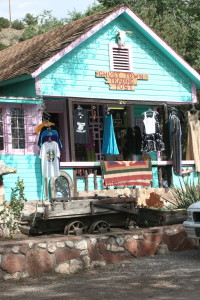