THE ACE CAFE – A POTTED HISTORY

Three simple expressions but they represent perhaps the most powerful fusion, not only in yesterday’s rock n’ roll era, but also in today’s 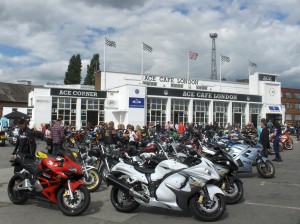 The Ace Cafe was built in 1938 as a roadside cafe to cater for traffic using the then new North Circular Road.   In World War II, the building was badly damaged and subsequently rebuilt in 1949.  It was a state-of-the-art cafe and one of the first to use neon signage.   With its proximity to Britain’s new and fast arterial road network, and staying open 24 hours, the cafe soon attracted hoards of young motorcyclists who were bored and searching for their own identity.  They found it at the Ace, together with the ‘devils’ music – rock n’ roll.

The advent of the ‘teenager’ in the early fifties saw the Ace booming, with the arrival of the Ton-Up Boys.  The British motorcycle industry was at its peak, when along came rock n’ roll.  It wasn’t played on radio stations, so the only places it could be heard was at fairgrounds or on Jukeboxes in transport cafes. 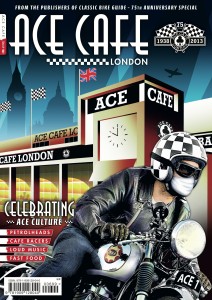 “Drop the coin right into the slot”……

From this powerful fusion of motorbikes and rock n’ roll, came the legends of record racing.   Dropping a coin into the slot, then racing to a given point and back before the record finished, turning the North Circular Road into an unofficial race track.

Come the sixties, the Rocker had emerged, and the Ace Cafe became the launching pad for many British rock n’ roll bands, like Johnny Kidd & The Pirates.  Gene Vincent also visited the cafe on one of his tours, and the Beatles are reputed to have been there before they became famous.  The Ace also has racing links, with original patrons, such as Dave Croxford, Dave Degens, and Ray Pickrell, taking their North Circular Road skills onto the racetrack.

The rock n’ roll peak was over by the mid-sixties, made safe by The Beatles and pushed aside by Carnaby Street and the Mod era.  Changes in the social order and growth of the car market, at the expense of the motorbike, and the retirement of the owner, saw the Ace Cafe, by then viewed as a ‘Greasy Spoon’, serve its last egg and chips in 1969.  Following its demise, the building was used as a filling station, bookmakers, vehicle distributors, and tyre depot, but remained largely unaltered.

Driven by his passion for bikes, rock n’ roll and history, in 1993 Mark Wilsmore, with the permission of the owners of the site, set about planning an event to mark the 25th anniversary of the cafes closure, with a mind to reopen the place.  That event in September 1994 attracted 12,000 motorcyclists and rock n’ roll fans from far and wide. 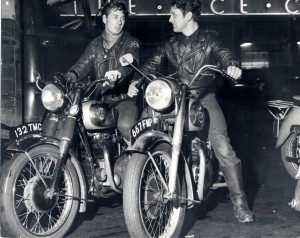 A film, entitled ‘An Ace Day’ was made, featuring interviews with former patrons of the Ace and today’s riders, to a rock n’ roll soundtrack.   There followed a seven-year labour of love, to obtain planning consent to turn the premises back into a cafe, and eventually purchase the site and building.   Initially, a part of the building was opened at weekends and events were organised with the aid of mobile catering unit for three years.

In March 1999, potential disaster struck, a hatch on the main North London water supply, exploded in spectacular fashion!   Buried ten feet under the Ace car park, it wreaked havoc, with the resultant flooding submerging the adjacent section of the North Circular Road, which remained closed for almost a week.

The huge blast had a severe effect on the structure of the building.  Debris and bikes were blown skywards on a wall of high pressure water, shattering window panes, and damaging the roof.  Despite this setback, Mark’s determination to save this legendary icon continued unabated. 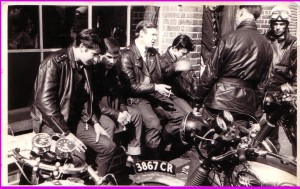 The Grand  Reopening took place in September 2001.  The Ace today, is a 21st century fully licensed cafe-restaurant and venue, with its own shop and plenty of reminders on the walls about its colourful history.  Numerous meets are held throughout the year to cater for all enthusiasts, from Ton Up Day through to Hot Rod Night.

The atmosphere is very laid back, you can relax and read the latest magazines, challenge your mates to a game of table football, listen to the Jukebox or simply drool over the amazing array of machinery that turns up.

With room to dance, the cafe’s gig list has featured top Rock n’ Roll artists from the USA, such as Robert Gordon and Linda Gail-Lewis, through to a real rockabilly hoe-down with contemporary bands & DJs.  Many gigs are tribute nights to the late and the great, such as Gene Vincent, Elvis, Johnny Kidd, Eddie Cochran etc. 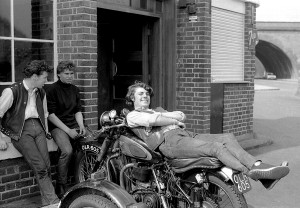 The bikes and the music may have changed, but the spirit remains the same.  Inspired by rich heritage and traditions, the Ace Cafe still embodies the same values as it did when it was first home to the Ton-Up-Boys (and girls) and Rockers. What could be found on a Triton when going for the ton in the 50’s and 60’s is emulated today on modern sports bikes and streetfighters.

Special celebrations, parties and small conferences can be catered for, and if you fancy tying the knot somewhere different, you can even get married at the Ace! 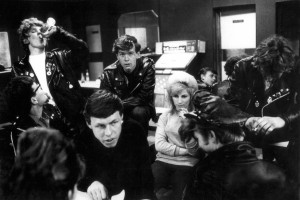 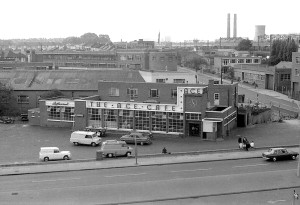 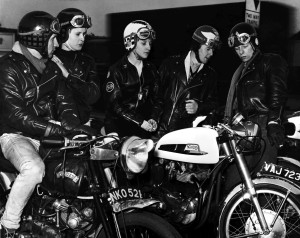