February 8, 2022—Riveter Chapter of the AMCA proudly announces that Athena “Vagabond
Chickie” Ransom and Vivian “Gypsy” Charros have agreed to join the Chix on 66 ride as our
all-female motorcycle support crew.

Chix on 66 is a cross-country ride that follows Route 66 from Chicago, Illinois, to Santa Monica,
California, from June 11 through June 25, 2022. Athena and Gypsy will ride the entire Chix on
66 route along with us, providing mechanical support in the event that any participant’s
motorcycle needs a repair, whether it’s a fouled spark plug, wiring problem, or anything else that
can be fixed on the side of the road. This service, in conjunction with the sweep support provided
by Jason Sims of the Cross Country Chase/Motorcycle Cannonball, will offer riders the security
of having backup support for mechanical problems that may arise.

Riveter Chapter President Karan Andrea says, “From the beginning, as we were talking about
this ride, we wanted a couple female mechanics to provide support on the road. This goes right
along with the intent of this ride, which is to inspire women, not just to ride, but to broaden their
vision of what is possible. They can ride a vintage bike, they can learn to service that bike, they
can develop mechanical skills. Having Athena and Gypsy provide mechanical support on this
ride will inspire all of us, myself included. When women see other women do these things, they
begin to believe it is possible for themselves. I am so grateful that Athena and Gypsy are taking
time away from their lives and businesses to join us for Chix on 66.” 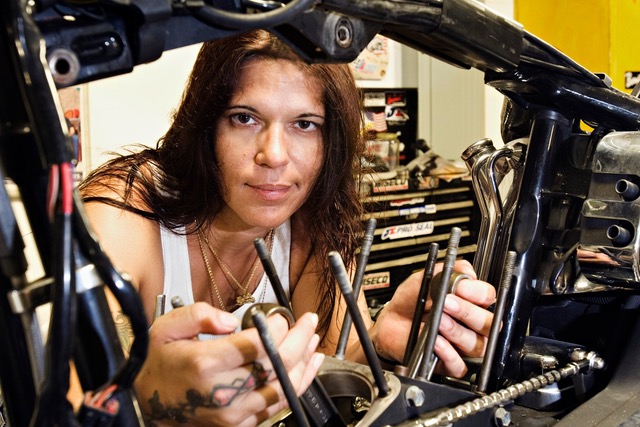 Athena Ransom, who has been riding and wrenching on motorcycles sinceher teens, learned her
craft from her “guy” at the time, back in 1982, and through her job at a racing legend’s
aftermarket shop. She is the founder/owner/lead tech at Vagabond Chopper in Pompano Beach, Florida.

As part of the Chopper Chick Crew, and the lead crew member of Cris Sommer-
Simmons’ Motorcycle Cannonball team in 2010, Athena has put to use her extensive experience with building, servicing, and maintaining bikes. She currently hosts the Athena After Dark
podcast, featuring various women in the motorcycle industry. Athena states, “I’m so honored to
be able to participate in the Chix On 66 Adventure and provide mechanical support to women
riders who are ready to take the iconic ride along Route 66. The lessons learned about
motorcycles and my past encounters with parts and people proved to be the driving force to a
passion-based career in the motorcycle world that I am grateful for daily. It is super exciting to
provide support along with my esteemed colleague, the legendary Ms. Gypsy Charros with
whom I’ve had the great pleasure of partnering with on incredible motorcycle endeavors.
Participants’ preparedness will be key and through multiple platforms we will build confidence
and motorcycling memories.” 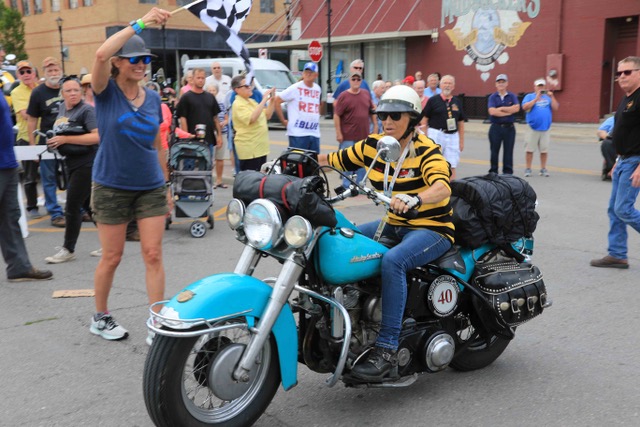 Vivian “Gypsy” Charros’ mom forbid her to ride the neighborhood boys’ dirt bikes when she
was 9 years old. So, she did what any good Catholic girl would do in that situation…she lied.
The inevitable crashes and bruising and abrasions happened. Hiding the injuries from mom was a
snap. Fixing the bikes on 9-year-old’s salary was challenging and taught her wrenching basics
and creative engineering. Those days prepared her for when she got her 1973 Harley FLH in
1977 that needed a total rebuild before it was road worthy. Since then, she’s had Pans, Shovels,
Twin Cams, and a custom Knuckle and got her hands dirty on all of them. She was a freelance
writer that evolved into a columnist and staff writer position with Thunder Press magazine that
gave her a valid excuse to ride thousands of solo miles. She’s been a Harley-Davidson dealership
parts manager, builder, winner of a Discovery Channel Biker-Build-Off trophy, and (her favorite
accolade) a member of the Chopper Chick Crew along with Athena “Chickie” Ransom. Gypsy
says, “I’m thrilled to be partnered up again with Athena on this exciting, legendary ride. I look
forward to traveling Route 66 in its entirety, and welcome the opportunity to not only provide
support for the other women riders, but inspire confidence in wrenching on their own rides.”
In the months prior to the start of Chix on 66, all riders and staff will be invited to participate in a
series of online seminars addressing topics such as how to prepare one’s motorcycle for a 2,400-
mile ride, what tools and gear to bring, what you should know about your bike, and more. These
seminars will be announced in the near future.