The folks which bring you Iron Trader News have followed Rinehart Racing from their beginning when Don Tilley first called Gerald Rinehart to build an exhaust system for his race bikes. Tilley had heard of Gerald’s NASCAR successes. Also ITN and Rinehart are both based in North Carolina so we’ve been able to follow the company from Gerald’s garage to their current place in the V-Twin industry.

Hollifield said. “Obviously some big shoes to fill and I’m excited for the challenge. I’ve got the best team in the industry behind me and I’m thrilled for this new chapter.” 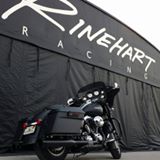