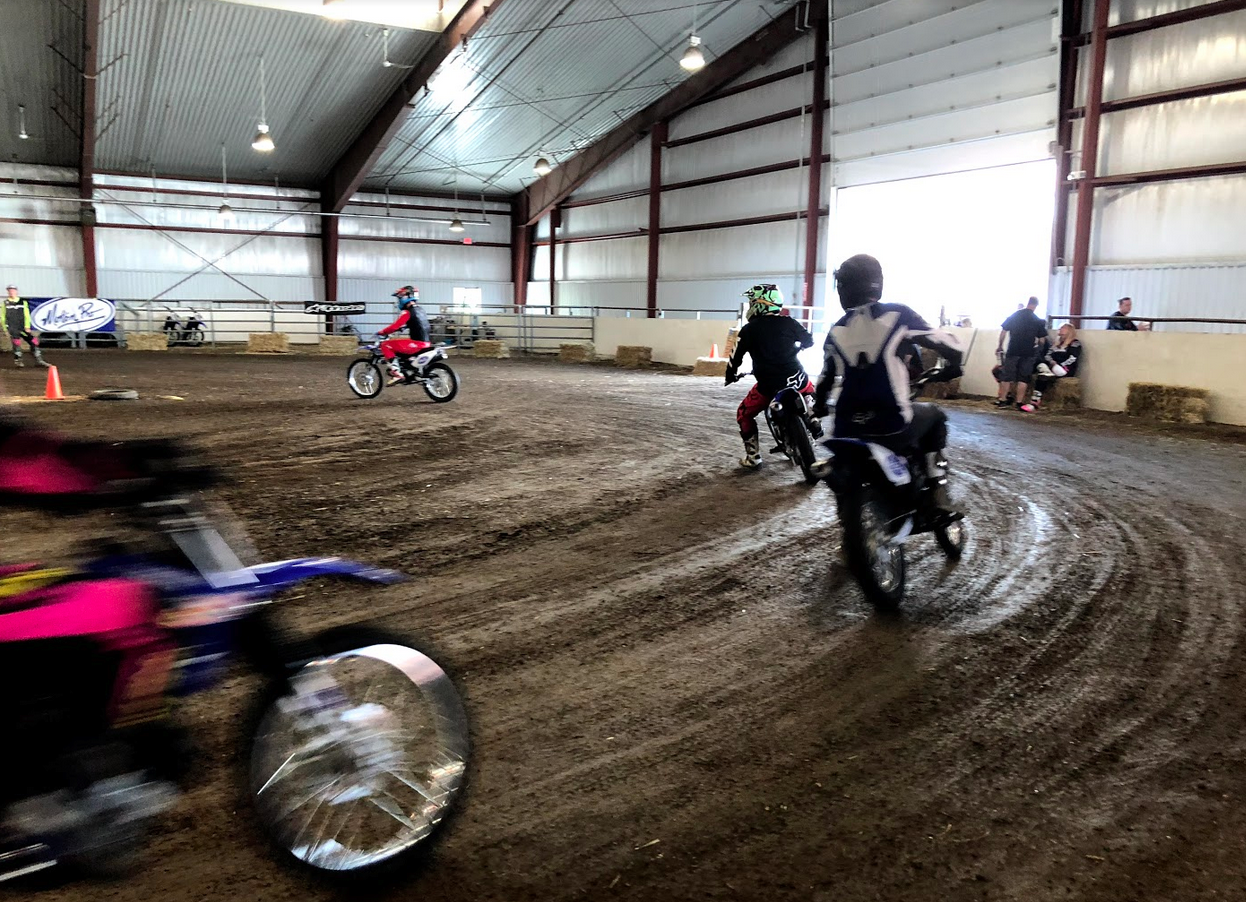 Danny Walker has been teaching American Supercamp for over 20 years. Why I waited so long after learning to ride to go? I don’t know! I’ve been riding since 2013, and I wish I would have gone sooner!
First, let me tell you a little about Supercamp. It’s a “Motorcycle Technique School” – so while it’s based on flat track dirt racing, this class helps you learn better control of the motorcycle overall. You start out thinking you know everything, and you leave realizing you had a lot to learn! 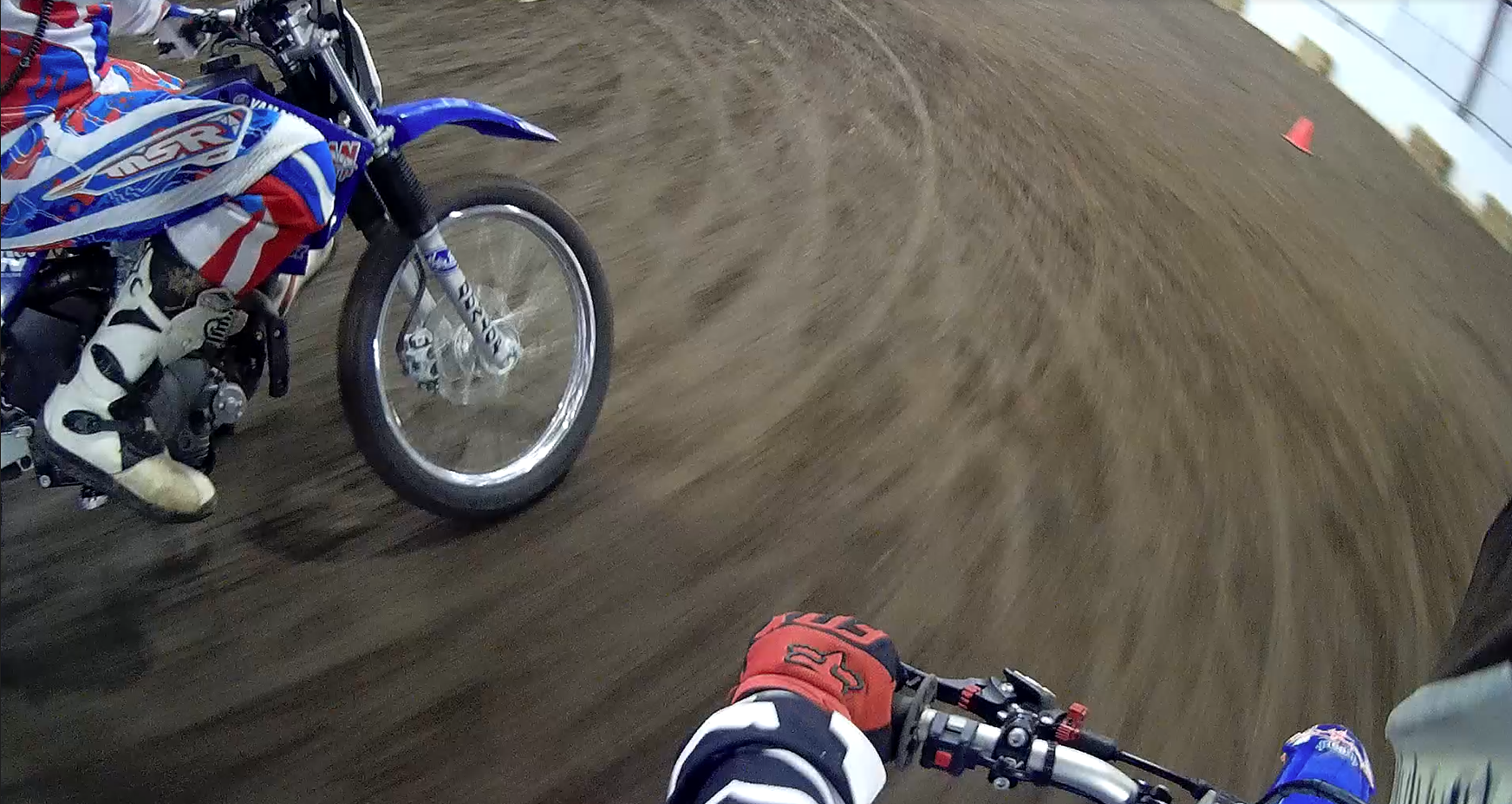 The Non-Racer class is the go-to for street riders, those who haven’t spent time on the dirt, or racetrack. It’s a two-day course, about 8 hours a day split between some theory, discussion, and of course, hitting the track on a Yamaha TTR125. “Oh, that’s a small bike! I can do that!” you say – well, you might not say that when you end up in the dirt! Crashes are welcome in this class, as Danny tells you, those little Yamaha’s are near indestructible. As Hunter S. Thompson says  “The Edge… there is no honest way to explain it because the only people who really know where it is are the ones who have gone over.” In this class, you’ll find “the edge” – and by that I mean the tipping point of the bike, the braking threshold, and you’ll push past your comfort zone. You may find the floor, but don’t let that scare you. A little low-speed fall onto the dirt really helps you to understand the edge! 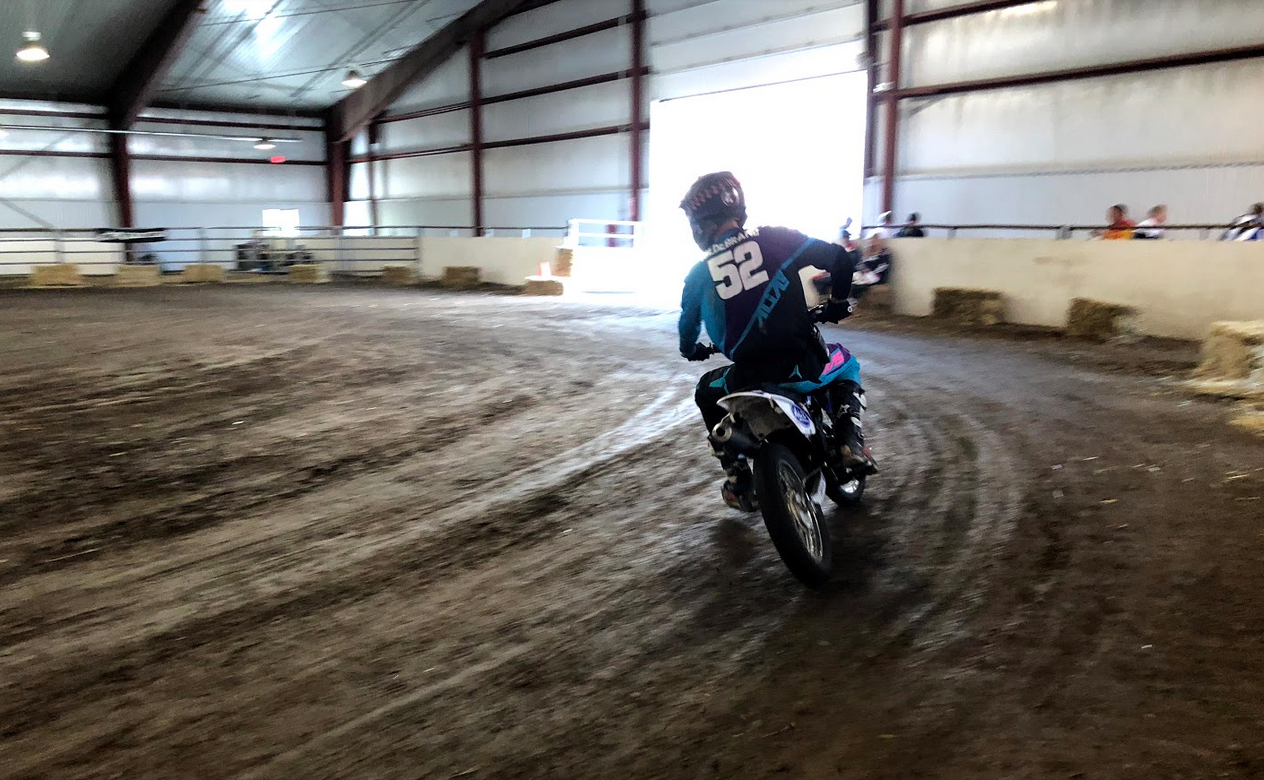 Why, you ask? Well, think of it this way. Do you want to find the edge as a car pulls in front of you? Or perhaps, a wide-eyed deer running across the road? Or how about gravel in a corner? I’d much rather find the edge on the track! The techniques you’ll learn will translate to your daily riding as you learn trail braking, how to properly enter a corner, how to spend the least amount of time on the edge of your tire, and how to save it when you do come in a little too hot to that corner! Danny has steps and detailed instructions to help you understand the theory of a proper corner. 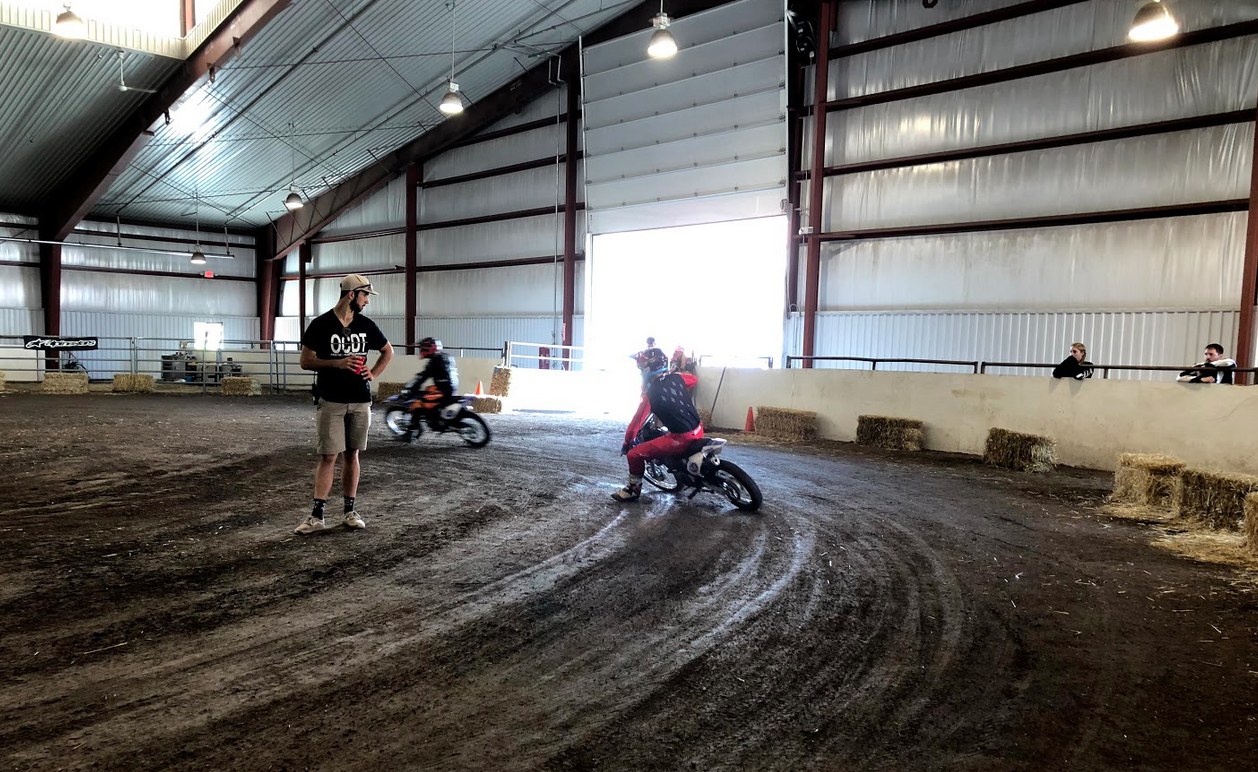 Now, on to the class experience itself.
I showed up on Friday, May 25 at the Illinois Fairgrounds, the same grounds that would host both the AFT Singles TT Short Track and the AFT Springfield Mile later that weekend. I arrived at the covered pavillion to see an oval track, small in size, and a line of Yamaha 125’s parked outside.   We sat down in the small row of bleachers, introduced ourselves, and got to a little theory on riding, translating street riding into dirt, and more. Those who didn’t have their own gear headed to the truck to use some that the class provides (courtesy of Fox Racing, AlpineStars and Bell Helmets) – as Danny says, the only things you have to bring to class are “socks and underwear” – he can provide the rest! 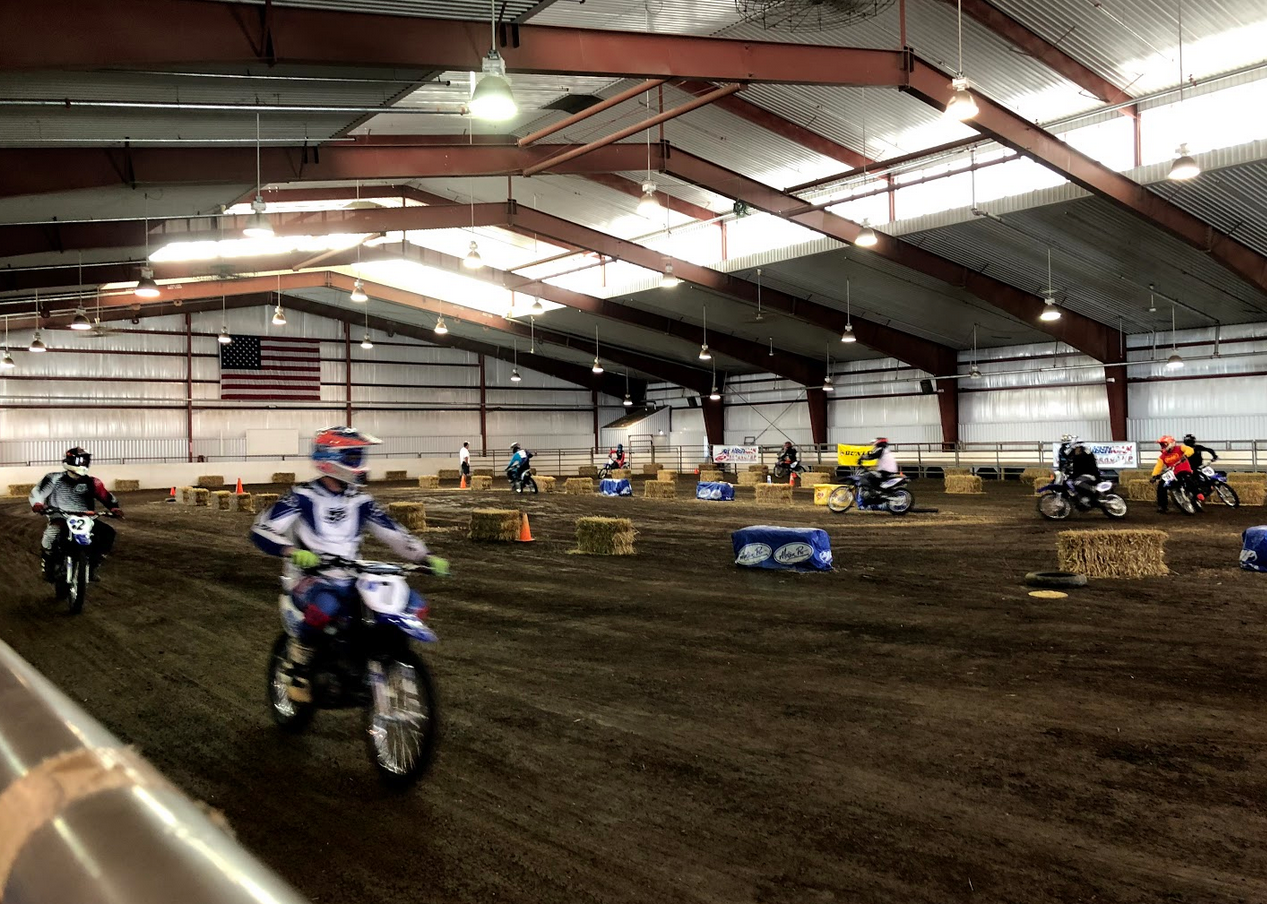 Instructors for this class included Austin Luczak (#10, also known as “The Flying Sac”, a road racer hailing from South Africa named, Harlan – a singles racer,  and Bill – a road racer sometimes known as Mild Bill, and other times his personality changed a bit to become Wild Bill… more on that later. 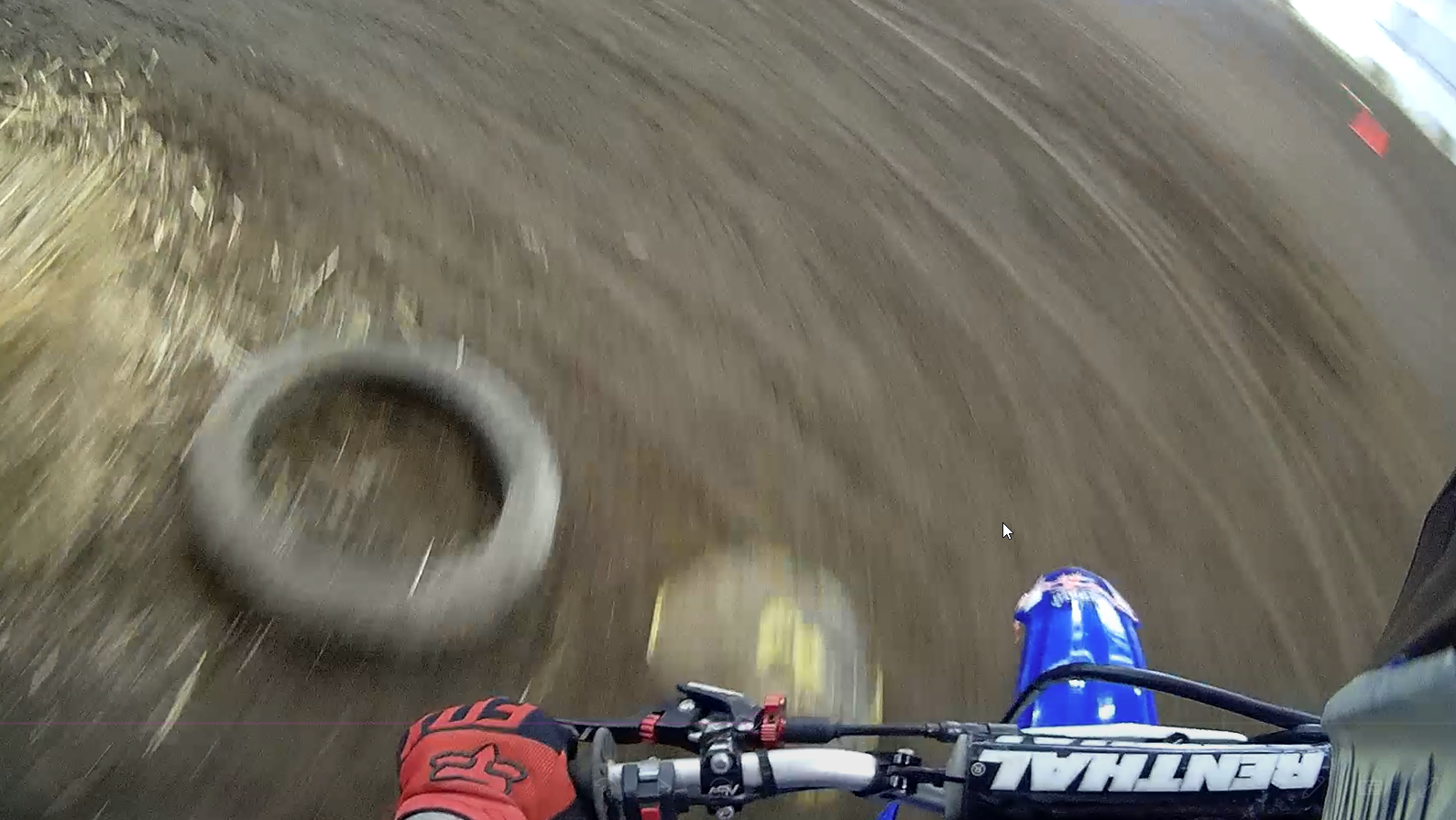 The bikes – each Yamaha is a TTR125cc (with a couple 110’s for the kids, minus the clutch) –  with Dunlop tires – a knobby in front, and a street tire on the rear. Saddlemen provided really comfortable, and slightly thicker seats. ASV levers, Renthal handlebars, K&N filters are also standard equipment. MotionPro is also a sponsor, offering tools for when they are inevitably dropped. 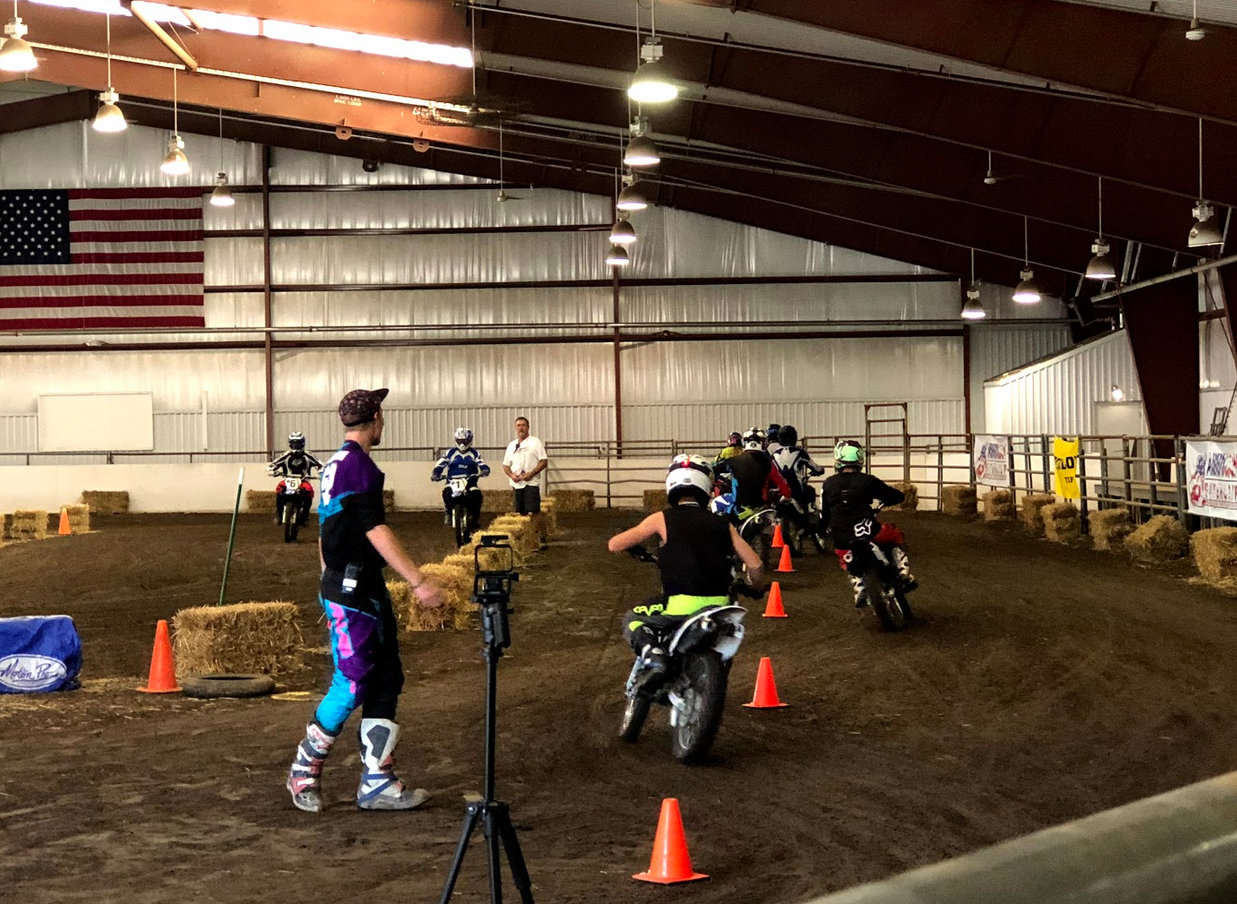 We split into groups based upon our comfort level and how we felt we would do. The class veterans (some had taken this class 5+ times), people mildly comfortable, and some of us who wanted to take it a bit slower. There were even two kids who had never ridden before (who by the end of class were ripping around the track like they had done it forever!)
Two instructors hopped on bikes and led by example, having us follow them around the track and attempting to stay in their line. More instructors stood around the edges of the track, letting you know when you were forgetting an instruction – “ELBOWS UP!”  “LOOK INTO THE TURN!” and “GET YOUR BUTT ON THE EDGE!” you heard as you rounded the corner. Again, if you think you know what you’re doing, forget everything you think you know. Listen to the instructors, as you’re bound to start focusing on one thing and forget another – you’ll find your elbow drop if you focus on your position on the seat, and vice versa.
Between drills, there is a balance bike – it looks like a 125 frame on rockers – and it really allows you to get the feel of how the bike leans. Lean too far, and you’ll tip right over. Get your body in just the right position, and you can sit on the bike and stay perfectly still. This is one of the coolest tools I have seen in a moto class for sure!
After each drill, instructors would coach you on what you had forgotten. Each drill was done going counter-clockwise, then clockwise. Then with just one hand on the bars. Just when you think you’re doing good, they upped the ante a bit. Then came Wild Bill, and the mud drill.. but I’ll let you find out more about that one when you take the class.
Lunch is provided by the class, featuring local catered food (ours was spaghetti, and I was ever so thankful for the carb load!) You don’t realize how much work proper racing form is, and you sometimes find muscles you didn’t know you had. Hip flexors, anyone? Yeah. You’ll learn quickly that stretching beforehand is a necessity.
Day one leaves you exhausted, sweaty, possibly a little bruised, and muddy. And exhilarated. Seriously – SO EXCITED TO DO IT AGAIN TOMORROW.
Day two begins with some Q&A – ask the instructors anything. They’re here to share their knowledge – not something a lot of competitive racer types really often do. Magicians rarely reveal their secrets – but Danny and crew are here to do just that.

As you look to the track on day two, you notice it’s set up differently. Hay bales and cones mark out a different shape of track than the day before – now you will be turning both left and right on the same track. Daunting, but again exhilarating. Excited, you grab your helmet and race over to your bike.

Drills go again in the same fashion, counter, then clockwise around this new track. They teach you how to keep your body position proper while moving the bike under you. They teach you how to leave a stop properly, and how to brake through the corner. After each drill, instructors pull you aside to let you know how you’re doing – perhaps your form has improved and they want you to speed up – or maybe you keep dropping that elbow. Constructive criticism, and perhaps a few “tsk tsk” fingers with a wisecrack (that’s just what I got!) They use a Go-Pro to film each session, then your group gets to sit down and watch – you can really see your improvements and where you’re lacking when it’s on video!

By the end of the day, again, your muscles are sore, you’re sweaty, dirty, and ready to get out and get more laps in. More laps? Yep. It’s addicting, to say the least.
I wish that I could fully convey how much fun, and how worthwhile this class is in words. Not only do you have the fun of riding a small dirt bike all day, but you come away with the knowledge and skills to both hit a track and to avoid sketchy situations in your daily riding. Everyone should be practicing and looking to further your skill, as everyone knows, if you don’t use it, you lose it. So seriously consider taking this class – the class fee is nominal and well worth it. 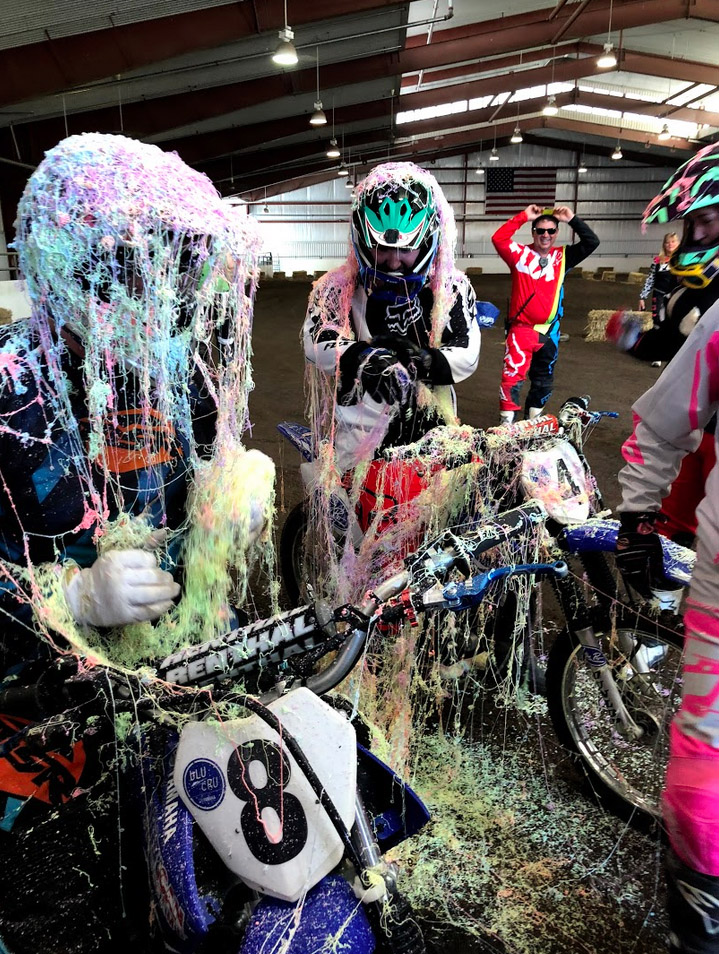 Needless to say, I will be taking this class again (and maybe again after that) and bringing some friends next time!
LINK: http://www.americansupercamp.com/