“For the 75th we knew we needed iconic branding and logo. We wanted rally goers and citizens to be able to see how much thought we are putting into next year. It will be a great rally. ” Said Sturgis Mayor Mark Carstensen.

The unveiling marks the beginning of preparation for the 75th anniversary of the Sturgis Motorcycle Rally. The 75th logo will be emblazoned on all official 75th anniversary merchandise that will be available only through officially licensed merchandise retailers. For more information: www.sturgismcrallyinc.com 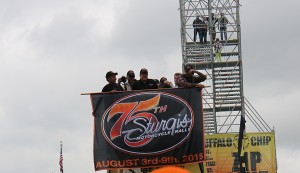