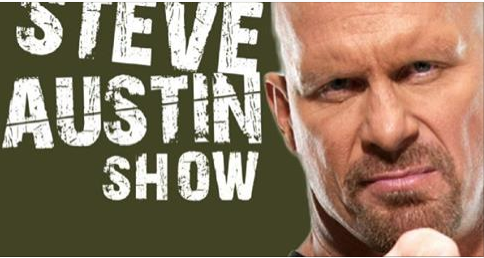 Tough guys apparently appreciate each other in ways the rest of us mere mortals don’t get. This became obvious when the Evel Knievel Collection Team met up with Stone Cold Steve Austin and his wife Kristin at Texas Motor Speedway’s AAA 500 race recently. Steve expressed an interest then in featuring EK expert Lathan McKay on The Steve Austin Show, a podcast Steve has been spearheading for a while now.

It was great fit: Steve’s curiosity and Lathan’s detailed knowledge. Tune in to hear news about the EK Collection, learn how the world’s ultimate daredevil influenced Steve, and get the inside track on EK lore that has NOT been common knowledge – until now.