In preparation for its inaugural race at Daytona Bike Week’s 75th anniversary rally in March 2016, Sons of Speed is engaging sponsors and previewing bikes at the 75th Sturgis Motorcycle Rally, August 3-9, 2015.

“There’s a lot of interest, a lot of sponsors approaching us,” says founder and veteran bike builder Billy Lane. “We’re already thinking about expanding to more race classes–but, obviously, our focus now is on preparing for the first race during Daytona’s 75th.”

Inspired by early twentieth-century board-track racers, the Sons of Speed race hearkens back to a stripped down, wide-open approach to motorcycle riding. The inaugural race takes place in March 2016, during the 75th Anniversary of Daytona Bike Week at New Smyrna Speedway’s half-mile, banked racetrack. It will feature up to 9 riders in several different heats, and winners of the heats will advance to a championship round. Each racer will sit astride identical hand-built racing chassis holding pre-1925 1000cc American V-Twin engines, and most racers will customize their machines by fabricating handlebars, exhaust, fenders, foot pegs, and fuel/oil tanks.

Anticipation and curiosity has run rampant since news of the event first broke, and the Sturgis Motorcycle Rally offers one of the only opportunities to get merchandise and see some of the Sons Of Speed bikes in person before the actual race.

Billy Lane and his Crocker speedway racer will be on hand at the Broken Spoke Campground during the Sturgis Motorcycle Rally–along with a few of the potential Sons Of Speed racing participants–for information sessions and photo opportunities. Limited-edition Sons Of Speed merchandise will also be available at the Broken Spoke Campground for purchase. Billy’s personal race bike–featuring his Sons of Speed hand-built chassis and 1914 Pope Model L engine–will be on display at Michael Lichter’s Naked Truth Exhibit all week at the Buffalo Chip.

“I’m both thrilled and humbled by the enthusiasm we’re seeing for Sons of Speed,” says Billy Lane. “It has really taken off–so much excitement. There’s talk of expansion. Sturgis and Daytona have been so generous and enthusiastic–it’s all a bit mind blowing.”

About Sons Of Speed Sons Of Speed is a motorcycle race inspired by early twentieth-century board-track racing. Featuring stripped-down bikes with pre-1925 American V-Twin engines and a steeply banked racetrack, Sons Of Speed hearkens back to a wide-open, full-throttle, thrilling style of motorcycle racing. The inaugural Sons Of Speed race will take place at New Smyrna Speedway during the 75th Anniversary of Daytona Bike Week in March 2016. Co-founded by veteran motorcycle bike builder Billy Lane, the first Sons Of Speed race will feature some of the sports most accomplished riders, builders, and enthusiasts, including Jay Allen (proprietor, Broken Spoke Saloons), Tommy “Chibs” Flanagan (of Sons Of Anarchy fame), Shelley Rossmeyer-Pepe (GM, Bruce Rossmeyer’s Harley-Davidson), Warren and Billy Lane, and many more.

Source and images: Rise Above Consulting 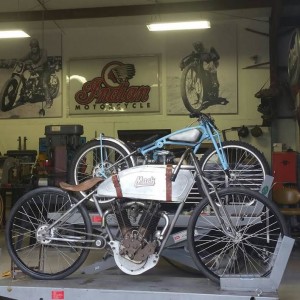