Skip to content
Wrecking Crew Rider Jared Mees Narrows the Season Standings with Back-to-Back Wins
ATLANTA (October 6, 2020) – Indian Motorcycle Racing, presented by Progressive Motorcycle Insurance, and its championship-winning FTR750 clinched its fourth consecutive Manufacturer’s Championship. Fittingly, Indian Motorcycle secured the championship with a Wrecking Crew podium sweep at Atlanta Short Track I.
Wrecking Crew Rider Jared Mees narrowed the season standings with back-to-back wins at the Atlanta doubleheader.  Joining Mees on the Atlanta Short Track I podium was reigning AFT Grand National Champion and Wrecking Crew Rider Briar Bauman and Wrecking Crew Rider Bronson Bauman. The bar-to-bar battle between Briar and Mees saw Mees take a final pass on the final lap through turn four to cross the finish line just .308 seconds before Briar. Bronson completed the Wrecking Crew sweep as he earned his first podium of the 2020 season by charging his way from the middle of the pack and making several passes in the final laps of the Main.
“It’s been incredible to see our team compete at a consistent level and again bring home the Manufacturer’s Championship for the fourth straight year,” said Gary Gray, Vice President – Racing, Technology and Service for Indian Motorcycle. “With four races remaining, we’re excited to see who can walk away with the No. 1 plate. Briar’s been hot and Mees hates to lose, so we should be in a dramatic and entertaining finish to the season.”
Atlanta Short Track II continued the dramatic, bar-to-bar racing from the night before, as Indian Motorcycle Privateer Brandon Price held Mees off as long as he could, coming up just short as Mees made his pass with only a few laps remaining. Price’s second-place finished earned him his first podium of the season, while Briar rounded out the all-FTR750 podium with a third-place finish.
With 244 points, Mees is firmly in second and now just 12 points back from Briar, who has 256 points on the year. With a pair of fourth-place finishes in Atlanta, Indian Motorcycle Privateer Sammy Halbert remains in third with 193 points, while Bronson Bauman and Price are fourth and fifth with 153 and 148 points, respectively.
The 2020 American Flat Track season will continue on October 9-10 at The Dirt Track at Charlotte Motor Speedway for the Progressive Charlotte Half-Mile I & II. For more information on Indian Motorcycle Racing,   visit  IndianMotorcycle.com and follow along on Facebook, Twitter and Instagram.
ABOUT INDIAN MOTORCYCLE®
Indian Motorcycle is America’s First Motorcycle Company®. Founded in 1901, Indian Motorcycle has won the hearts of motorcyclists around the world and earned distinction as one of America’s most legendary and iconic brands through unrivaled racing dominance, engineering prowess and countless innovations and industry firsts. Today that heritage and passion is reignited under new brand stewardship. To learn more, please visit www.indianmotorcycle.com.
Tags: atlanta short track briar bauman bronson bauman championship Indian motorcycles JARED MEES wrecking crew 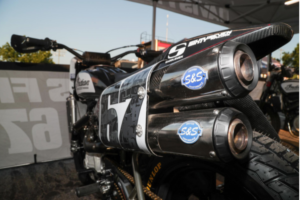 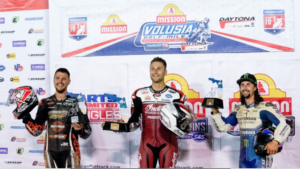 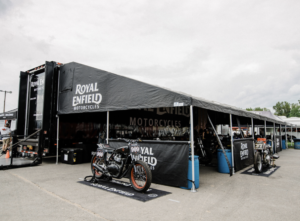