“Every other year our agency ordered new motorcycles, and we were at the mercy of whatever new advances were made to the bike itself, which usually wasn’t much,” said highly decorated DBPD Traffic Unit Officer Jason Kilker. “By contrast, Victory Police Motorcycles provided a two-page checklist of law enforcement-only options that were available for our officers to select what suited them best. These options included, but were not limited to, full-size AR-15 rifle racks, heated grips, and a mind-blowing LED light package that no one can match.”

The Daytona Beach PD joins a growing number of law enforcement agencies across the United States and Canada have switched to Victory Police Motorcycles which is based in Tucson, Arizona. VPM acquires motorcycles from Victory then equips them with equipment specifically requested by those agencies. The bikes will feature the department’s striking custom paint scheme and famous logo. Volusia Motorsports in New Smyrna Beach will provide service and regular maintenance for the fleet.
choose Victory Police Motorcycles.” 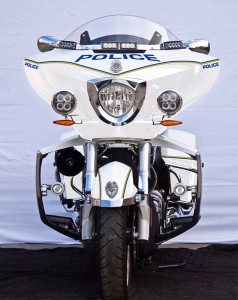