Grilled cheese: It’s one of America’s iconic comfort foods, the sort of thing that can take a person back to childhood in a heartbeat. The Grilled Cheese Truck (GCT), a Southern California staple among gourmet food trucks, rolled into Sturgis in 2014 and made an impact. Yes, their food is great but there’s another reason the GCT resonates with bikers: the company owners actively seek out veterans to own and operate them.

Started in Los Angeles in 2009, the GCT was quickly and warmly embraced locally, so company owners decided to expand. But not simply for commercial purposes. They chose to reach out to a community that was ripe for entrepreneurship: U.S. military veterans retuning to civilian life from Iraq, Afghanistan and other military service. The company has committed to making the first 100 franchise opportunities available to vets before taking it to the public at large.

“We believe the skill set developed by military training lends itself well to running this kind of business. Leadership under pressure, unconventional approach to the work day, a mission specific outlook,” said Interim CEO and Chairman Robbie Lee. “Engaging quickly with a career or project is what vets need to transition quickly. It’s not charity, it’s respectfully offering a hand up.”

The buy in for a GCT franchise is quite reasonable at under $100,000 – especially compared to big name fast food franchises, which can be 10 or even 20 times higher. And because the GCT has built its foundation on solid value and superior service, it’s important that GCT franchisees are a good fit. So candidates are thoroughly vetted to ensure success. If the company finds a veteran with passion and discipline who qualifies but is short on the initial buy in, they’ll even offer financing, so strong is the company’s desire to see good people succeed.

In a fortuitous turn, the GCT’s effort to recruit veteran owners came to the attention of General Wesley Clark.

“He heard about what we were doing and wanted to get involved,” said Lee. It’s been a great connection, too, not only due to the General’s high profile but thanks to General Clark’s son, Wes, Jr., as well. As a military veteran, Wes is also on board to assist the endeavor. So is Olympic Skier Bode Miller who was motivated by the possibility of seeing veterans prosper. “It’s a cool American kind of thing to do,” he said.

GCTs have been popular at NASCAR races, concerts and dozens of other venues but 2014 was the first time these trucks have appeared in Sturgis. As a longtime motorcycle rider himself, Lee thinks it’s a natural fit. “We’re encouraging everyone to give them (vets) a chance,” he said. “We really are that American entrepreneurial story.”

Watch for Grilled Cheese Trucks nationwide as the company expands. And give them a try; you’ll be glad you did. 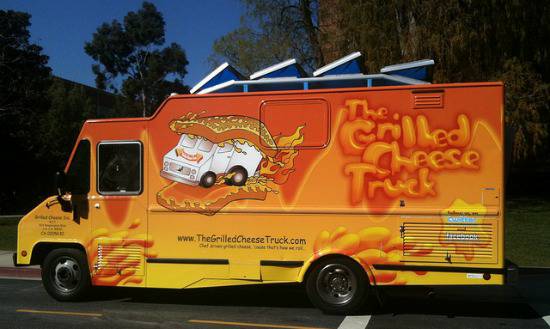 Accident Scene Management Teams Up with Chix on 66

Accident Scene Management Teams Up with Chix on 66