When most of us think about the people in Washington that run this country we think of a bunch of stodgy old men and women who don’t really get it. We view them as being well-to-do, having a stiff upper lip, and being mostly  conservative (no matter which party). To be sure there have been characters in this exclusive group who marched to the beat of a different drummer. One of the most glaring examples of this is former Senator Ben “Nighthorse” Campbell from Colorado who would quite often ride up to Capitol Hill on his Harley wearing a beaded fringed leather jacket. 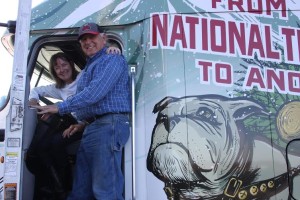 Awhile back ITN Editor Marilyn Stemp had a chance to chat for a few minutes with him at a stop in Concord, North Carolina as he was hauling the  Capitol Christmas Tree from Colorado to Washington D.C. No, he wasn’t leading the caravan while riding his bike, or sitting in the back seat of a limo, he was driving the big rig that was pulling the trailer with the tree on it. You see Ben “Nighthorse” Campbell may have been the only United States Senator to ever have a legitimate CDL.

In fact he told Marilyn that he shows his own big rig on the custom truck show circuits along with a ‘29 Chevy fire truck, plus he has a Sterling made by Freightliner outfitted with a fridge, satellite TV, double bunks and a Toy Box to haul his Mini Cooper when he takes off to Tucson for the winter. To show that trucking is a true passion of his he related that when he was still in office and he’d get tired of all the hassles he’d go out and deliver beer for Budweiser and Coors. “Nobody knew it. I’d keep a low profile. I’d pull up to the loading dock and get a sideways look from the guys on the loading dock.”

While Ben may have fun with his trucks he’s best known as the motorcycle riding Senator. Ben said that he’s had a lot of motorcycles and started riding when he was 14. “When I was younger we were into Triumphs. You couldn’t pack enough tools to keep those old Harleys together in the old days.” “Then I lived in Japan for a while and worked for Honda so I rode Hondas for a few years. I started riding Harleys when I got elected and went back to Washington.”

Ben says that, “It didn’t always pay dividends though, I’ll tell you. I used to ride my bike to work (in Washington D.C.) cause it was easy to park. The other senators in the black limos would see me and say, oh no, not him!” and “One time Clinton called us to come over to the White House. I was following Senator Kennedy and Senator Hatch who were in their cars in front of me at the back gate. It’s guarded, not open to the public.” At the gate, the guard said “Good morning Senator Kennedy come on in. Good morning Senator Hatch, come on in. Okay buddy, off the bike!” “I took off the helmet and he said, Oh, gee, I’m sorry, Senator!”

Like all of us longtime riders Ben said he saw when bikes were become popular for the “macho profiling BS stuff.” He said one senator told him he’d like to ride a bike and get a Harley. Soon after that he saw that senator  riding his bike on the stage of the Jay Leno Show. “3 weeks before he didn’t know the front end from the back end.” And that another senator bought a bike even though, as Ben put it, “He shouldn’t be around fast machinery at all. He wanted to ride so he bought a bike and we met him up at Sturgis and he was a terror. There were 4 of us, so we rode around him two and two, to protect him. Then he fell down and broke his foot and that was the end of his riding. I’ve seen them all!”

Even when he was in office Ben was a fixture at events like the Love Ride, Sturgis, Laconia, Daytona (I met him in Hollister, California at the “Return of the Wild Ones” rally in 1997) and of course he used to do Rolling Thunder every year. “I even got them a flyover when I was in office and a lot of that was before 911, but after 911 it was tough to even get helicopters. Now everything is top secret.”

Talking about Sturgis he said, “It’s fun it’s kind of a guy thing. Paint qualifies as clothing from the waist up for women.” “I took my wife to Sturgis one year about 2002 and were gonna meet some riding friends at the Buffalo Chip. She was hungry so we decided to get something to eat and went over to the gyro booth. There was a gal behind that booth and she had on two things: an earring and a smile. I was trying to look away and I’ll be damned if she didn’t say, “Hi Senator Campbell, how are you?” I said do I know you? She said yes, I saw you at the Ignacio Rally – but she had clothes on then.”

Right now Campbell said he has 2 Road Kings now, 1 for him and 1 for his wife. He also has an old bored and stroked Sporty chopper, “one of those ones that looks good to go to the bar but you don’t want to ride it very far.”  He says he’s had many other bikes in the past. “… so damn many I thought they were breeding in the garage for a while.” He‘s also built bikes including an FXLH with a red white and blue flame patriotic paint job that included a U.S. seal on the fairing. He built it during Bush’s second term for some displays for him around D.C. not only did it display well in D.C. but it got first at the World of Wheels, first at Denver, then when he  took it to Sturgis. Willie G gave him a trophy for best of show at Sturgis. But he says, “The trouble with those things is that you put so much money into it you’re afraid of getting a scratch on it. It became a trailer queen. It won a lot of awards but it wasn’t a lot of fun.” In contrast he and his wife ride their Road Kings all the time.

Soon it was time for the Ben and the Capitol tree caravan to continue their 5 week, 4000 mile trip time. The last time Ben hauled the tree, yes Virginia this isn’t his first time to haul the tree, it only took him 6 days. He said, “It was so damn much fun that when they called to say it was coming from Colorado again (they get a tree from a different national forest every year)… I said yeah, I’ll do it again.” He also said that motorists along the caravan’s route acted like they do around groups of motorcycles, “We’ve had a couple of near misses. People try to pull into the gap between me and the police escort. That would have been bad publicity: Senator crushes citizen.”